“How does the bus know where we’re going?”

That was the question that Quinn, 6 years old, had for his mother, Dana DeMaster, the other day as they rode the bus from their house in St. Paul’s Midway neighborhood.

Though she bristles at the term, DeMaster is one of the Twin Cities’ “free-range parents,” trying to teach her kids how to get around independently as they grow up. Explaining bus routes to her son is just one of the necessary steps. All over the Twin Cities’ more walkable neighborhoods, parents are teaching their kids the rules of the city in the hope that they learn how to be more thoughtful grown ups.

Why is there a special word for ‘free-range kids’?

If you talk to parents about the idea of “free-range parenting,” you’re likely to get guff. Many people don’t like the term, and wonder why letting young people walk and bike in the city should be a big deal.

“I totally hate the term,” Sam Newberg told me. Newberg and his wife are raising two kids – ages 8 and 4 — in Minneapolis’ Standish neighborhood. “I let my kids walk home from the local hardware store just the other day. But sheesh, don’t tell anyone! I’m trying to raise responsible engaged citizens, not chickens.”

Similarly, DeMaster doesn’t like the way the term “free-range kids” is used by the media (in articles just like this one!). “I think the whole ‘free range parenting’ thing is a media scam,” DeMaster told me. “From the moment you get pregnant, there are all these long-range parenting essays about everything. And this is just one of those topics where people read those articles to confirm their own beliefs.”

But if you talk to any older person, they’ll likely have stories about how much freedom they had to move around their neighborhood growing up. (For example, see this map from the UK’s Daily Mail.) These days, at least if you pay attention to media narratives, many parents are more reluctant to let their kids wander around the city on their own.

For most parents, rules about how far kids can wander in the city are constantly evolving. “Now that we have a safe crossing at Hamline, I’ll let my 10-year-old cross at Hamline,” said Erin Pryor Pavilca, who is raising four kids in St. Paul. Pavilca was one of the people behind the new Charles Avenue Bicycle Boulevard, which installed safer crossings at many of St. Paul’s busiest streets. 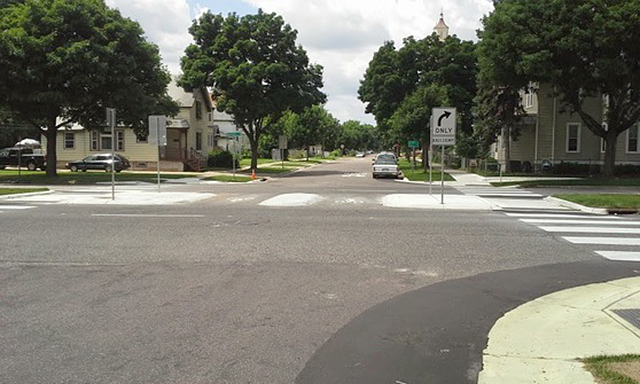 Courtesy of the city of St. Paul
A median crossing on the Charles Avenue bike boulevard in St. Paul.

“I would not let him cross there before, but now there’s pedestrian refuge,” Pryor Pavlica continued. “But they’re not allowed to cross Lexington, and not allowed to go over Snelling. Snelling just scares the crap out of me … .”

For most urban parents, it’s not “stranger danger” that worries them; it’s cars. Some streets are simply too busy, or too dangerous, for kids to be able to move on their own through the city. “We have a park that’s only a block away, but it’s across Snelling Avenue,” DeMaster explained to me. DeMaster lives a few blocks way from Pavilca, in the Midway neighborhood.

“I can’t let a 6-year-old cross Snelling by himself,” DeMaster told me. “We can almost see the park from our house, but I don’t know what the correct age will be. I know that Quinn is super-responsible, he’s a level headed kid. I trust him.”

Likewise for Nikki Nafzinger, raising two kids in Minneapolis’ Nokomis neighborhood, 28th Avenue is the uncrossable barrier. That’s one of her strict rules.

“In our little neighborhood, 28th Avenue is a big boundary,” Nafzinger explained. “My 6-year-old is not allowed to cross 28th, but for my 8-year-old, his school is on the other side of 28th. He gets to cross it and has to let us know.” 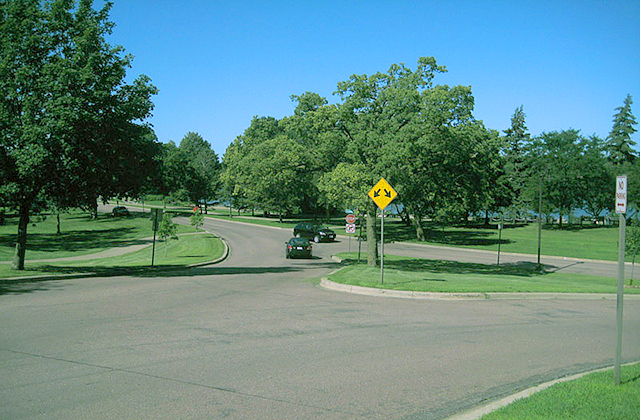 Nafzinger’s other rules include the usual routine that I remember from my suburban childhood: Let mom know where you’re going to be, and make sure to show up for dinner.

There are certain things that make for better free-range neighborhoods. In addition to safe streets, having stable relationships with neighbors that will watch out for kids is a big part of the picture. “Recently, we decided our 6-year-old was old enough to bike around the block without supervision,” DeMaster told me. “The first night Quinn was off riding by himself we got two calls from neighbors asking if we knew and if it was OK.”

What do kids get out of it?

For so-called free-range parents, letting children explore the city on their own has a double benefit. For one thing, it’s a big relief for busy parents. Letting kids take care of themselves allows for much needed time to oneself, a sure key to sanity.

But free-range parents also believe that letting kids get around the city, explore on their own, and interact with diverse people makes them into better young people.

These days, Kathy Vadnais’ kids are mostly out of the house  — they’re 20, 18, and 14 — but growing up she let them take the bus by themselves all over the Hamline-Midway neighborhood. She believes that their independence gives them a different perspective.

“My daughter is in college [at a liberal arts school in Minnesota], and probably very few students there are as urban as she is,” Vadnais told me. “She’s told about remarks about the city like ‘Oh, its so ghetto’ or other remarks that are bigoted. I know that having my kids grow up the way they have, they can get along with almost anybody, and be around almost everybody, and not have those biases. They really see everybody as being a person, without the sense of entitlement or superiority.”

Similarly, Erin Pryor Pavlica, the mother of four, believes that having independent kids is the only way to build community.

“They’ve always been surrounded by many different people from many different walks of life,” Pryor Pavlica told me. “If you don’t get involved in your neighborhood, it’s never going to change. And my kids are part of that change. They’re at the park and they’re being nice to the littler kids who are there with their parents, and being inclusive with everybody and they get to do that.”

Given the recent talk in St. Paul and Minneapolis about giving children more freedom to walk around, with “8-80 cities” and “safe routes to school,” chances are that more kids will be trying to make their way around city streets by themselves. Perhaps in the future, “free-range parenting” will just be normal thing, and won’t need it’s own terminology.

“We were at a friend’s house only a block and half away last Friday night, going out on a bike ride,” Nafzinger said. “It was nice outside and our 8-year-old wanted to go home and other people were like, ‘I knew you guys were free-range parents!’ And I said, ‘No, we’re just parents.’”

How to be a ‘free-range parent’ in the Twin Cities