When the storm blew through town on Sunday afternoon, the sudden hailstones slammed into windshields and piled up in yards, making headlines and surprising people throughout the metro. But the rain that poured down had a big impact, too, washing a whole winter’s worth of pollution into the Mississippi.

Looking out the window of her downtown St. Paul apartment, Melissa Wenzel was depressed to see how clearly the storm water polluted the river.

“Right now, I’m jaded about storm drains,” Wenzel told me. “Seeing all that trash going into the river makes me depressed. I’m only one person and can only do one person’s job.” 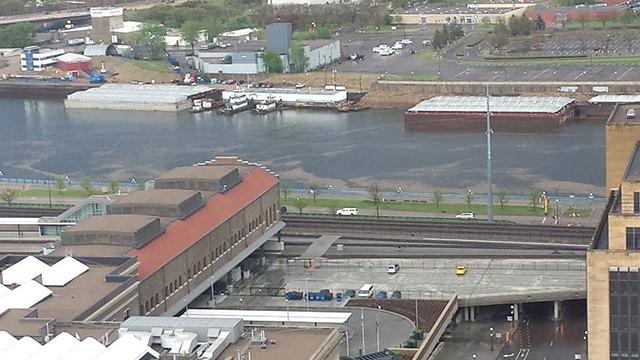 Courtesy of Melissa Wenzel
Looking out the window of her downtown St. Paul apartment, Melissa Wenzel was depressed to see how clearly the storm water polluted the river.

Wenzel works as an industrial storm water program coordinator for the Minnesota Pollution Control Agency, and has spent years fighting the tide of trash polluting the water cycle. After decades of improving the sewers connecting our streets to lakes and rivers, getting people to think more about storm drains requires creative thinking.

A brief history of dumping into the river

For most of the 20th century, city folk viewed rivers as convenient places to get rid of anything unwanted. For example, the big Minneapolis mills dumped wheat germ straight into the Mississippi (so that it sometimes resembled oatmeal), and that was probably one of the better kinds of pollution from that era. “Downstream” was out of sight and out of mind, and by the time the Mississippi reached St. Louis, the sewage and pollution of millions of people had turned the river into a fish-free cesspool.

Apart from ensuring safety for the occasional bike tire, the design of storm drains hasn’t changed much over the years. But underneath the ground, things have certainly improved. During the 1970s and ’80s, most early 20th-century sewers, where during big storms the “combined outflow” dumped raw sewage into the river, were replaced. These days, the two kinds of sewer (storm water and sewage) are completely separated. Still, the whole system is quite old: St. Paul’s oldest separated sewers date back to the 1950s, but some of the oldest storm sewers date back over a century.

In a way, all the progress means that solving the storm water problem has become more challenging. According to Anne Weber, a sewer engineer for St. Paul, state PCA regulations limit how much each city can discharge into the Mississippi through “volume control” permits. The tight regulations mean that cities like St. Paul have been installing rain gardens and other water-retention features. But these kinds of challenges have only increased as the changing climate has led to more intense storms.

“With the ‘hovering over’ effect, where micro storms stay in one area, it’s hard to plan for that type of thing,” Weber told me. “It might have been in the ’87 storm where we had flooding in the Northeast part of the city. So we bought out an area of homes, and put in a storm water feature, making a park area that would flood during larger events to protect the surrounding neighborhood.”

“The whole goal is to have only rain down the drain,” Melissa Wenzel told me. “So we have storm drains for a reason. Some states aren’t as progressive, so all that water goes to a treatment plant.”

Wenzel’s job involves working with 3,500 industrial and institutional regulated facilities throughout the state, making sure their water runoff is clean. This involves talking to a wide range of businesses — from big corporations to mom-and-pop companies, airports, marinas, trucking facilities, and many more.

“Every facility is different,” Wenzel explained to me. “What’s new as of 2010 is that we’re making them collect samples and report to us their numbers. We have a lot of eye-opening moments, where people had no idea that they had unclean water.”

But compared to working with big institutions, where someone’s in charge and accountable, working with residential property is a bigger challenge. How do you reach thousands of separate individuals, and persuade them to pay more attention to what’s going down the storm sewer on their block? 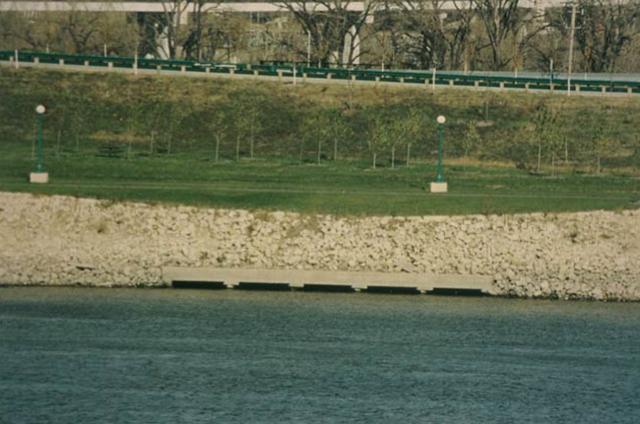 Courtesy of the City of St. Paul
Sewer outflow into the Mississippi.

For years, St. Paul has placed signs by its storm sewers informing people about their connection to the river. (I first saw one of these stencils — ‘this drains directly into the river’ — over a decade ago, as part of a Boy Scout project.) But Jana Larson is part of an effort to strengthen people’s sense of responsibility for storm drains.

“After a storm there’ll be a lot of trash in the river: cups, pieces of plastic, all kinds of stuff,” Larson told me. She is an environmental program manager at Hamline Univeristy who directs the Adopt-a-Storm-Drain program.

“People will wonder, ‘Wow, look at all that garbage; where did it come from?’ Well, it came from people dropping the cup or trash on the street, and when a storm comes it washes all of it right in the river.”

The adopt-a-drain program is a pilot project in St. Paul, a program of the Capitol Region Watershed District, aimed at decreasing storm water pollution in residential neighborhoods. This spring, they’ve seen a dramatic increase in people signing up and adopting storm drains, particularly around Como Lake. 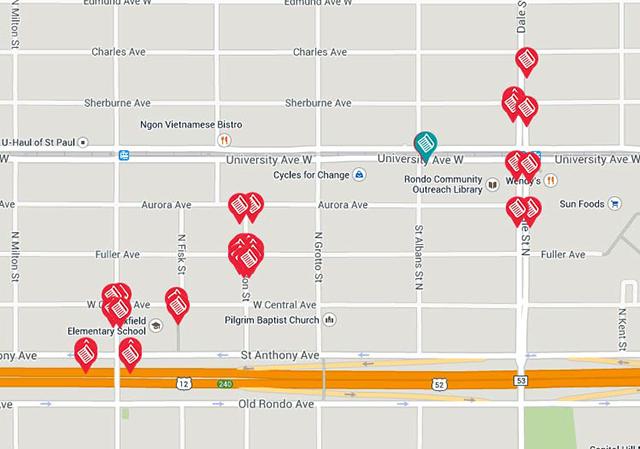 Courtesy of Jana Larson
Storm drains up for adoption, from the Adopt-a-Drain website.

“It’s been a crazy success,” Larson explained, pointing to the 125 families who have signed up. “When you pledge to adopt a drain, you’re pledging to put a yard sign in your yard, to keep it clear of any debris, and to do the right thing in your own yard at home.”

“It ends up in the sewer and washes right into the river,” Larson told me. “Things like leaves, grass clippings and fertilizer are what turn our lakes and rivers green.”

It’s easy to forget about underground infrastructure, which remains out of sight and mind. And once our pollution washes into the Mississippi, it’s easy to imagine that it goes “away,” becoming someone else’s problem downstream.

“How do we prevent what happened yesterday?” Wenzel asked me after the storm. “One thing is to target illicit discharges, people who might throw trash on the side of the road, or restaurants dumping their sink dishwasher outside. It shouldn’t be difficult to do the right thing, but I don’t think people make a connection between what they’re doing and what happens to the water.”

When it comes to water, everything is connected. After Sunday’s big storm offered a rare chance to see that connection, we can hope the lesson sticks.

Remember: What goes into storm sewers goes right into the Mississippi