The word “detour” comes from the French, meaning “to turn away” or “change direction.” But it can also mean “evasion” or “excuse,” and as any driver knows, Minnesota’s contracted construction season can be synonymous with frustration.

Though it might seem like a simple matter of erecting orange signs, creating good detours can be maddeningly complex. How long will the road be closed? What kinds of roads are the nearest alternatives? What to do about unpredictable bicycles and pedestrians?

As technology starts to help with problems of getting good information to drivers, ensuring good detours might smooth out the messy reality of road construction.

Probably the craziest detour in Minnesota history was the impromptu rerouting following the Interstate 35W bridge collapse. Needless to say, the 2007 bridge tragedy was completely unexpected, and forced state agencies to reroute 150,000 cars per day into other parts of the Twin Cities’ freeway system.

As it turned out, however, the detours worked surprisingly well. A University of Minnesota study determined that average commute times increased only marginally, less than half a minute on average.

Those unexpected results stemmed from two counterintuitive facets of detour construction. The first is the phenomenon of “induced demand,” or the dynamic relationship between road capacity and people’s willingness to drive. Simply put, the more available capacity on the road, the more likely that people will choose to drive; conversely, the less capacity, the less likely the car trip. That means that expanding roads might create more traffic, while reducing travel lanes might decrease traffic at the margins.

According to David Levinson, the engineering professor at the University of Minnesota who worked on the study, the I-35W bridge was a great example of “reduced demand” (the opposite of “induced demand”) where “about 1/3 of the trips across the river ‘disappeared,’ and were either foregone or went to different destinations.”

The second conclusion is that the Twin Cities’ road system actually has a well-connected road network, relatively speaking. During a detour, most Twin Cities drivers are able to find alternative routes. 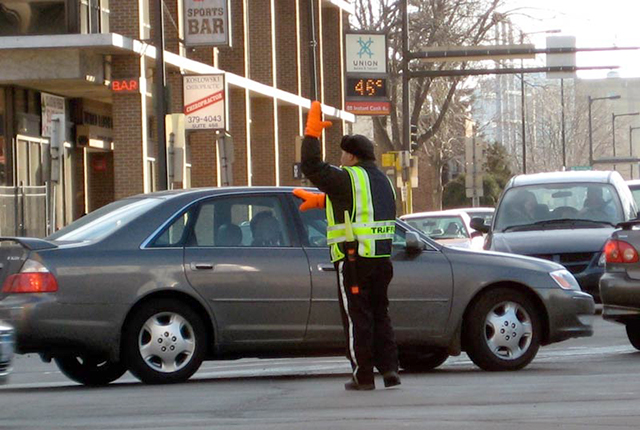 MinnPost photo by Bill Lindeke
A traffic cop directing detoured traffic through Northeast Minneapolis in 2007, following the collapse of the 35W bridge.

Though many people find detours frustrating, there are a few simple rules for making a good one. The first is to minimize impacts. For short-term projects, detours should only take place on weekends or in the evening. For longer projects (like the bridge replacement at Interstate 94 and Snelling Avenue), timing is everything; Snelling is scheduled to be re-opened before the start of the State Fair.

“Take shutting down Hennepin,” Tim Drew, a traffic engineer for the City of Minneapolis, explained to me this week. “You don’t want to do that on a weekday when there’s a ton of traffic out there. You look for weekend, one with no events downtown, if that’s possible.” 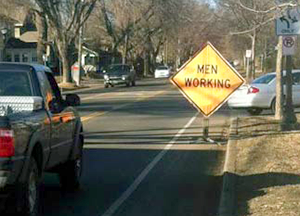 The length of detour time might also force changes with signage or traffic signals. As Drew told me, for the yearlong closure of Central Avenue in Northeast Minneapolis, the city tweaked traffic signals on detour routes by adding left-turn phases.

(One more wrinkle is matching detours with the construction schedule. There’s nothing drivers hate more than seeing a detour without any road construction happening!)

The second rule of detours is to use similar types of streets. You don’t want to detour traffic from a busy arterial road onto a quiet residential street, or vice versa.

A corollary to rule two is that agencies try hard to keep detours on “their own” roadways. When forced to detour traffic onto annother jurisdiction’s roads, agencies like MnDOT actually compensate counties and cities for the added wear. Sometimes, as in the case of re-decking I-35W in Burnsville, if an agency can’t find a suitable detour it will simply not post anything. Sometimes nothing is better than something problematic.

Complexities of biking and walking

Detours can be particularly frustrating for people biking or walking, especially if they happen across a road construction sign in a bike lane or a sidewalk closed on a busy street. But as more people begin getting out of their cars and choosing active transportation options, cities are being forced to pay more attention to detours that accommodate “complete streets.” 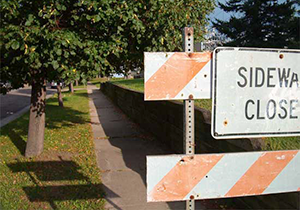 “We don’t want to say ‘sidewalk closed’ if at all possible,” Tim Drew, the Minneapolis engineer, explained. ”We want to use the same side of the street. For pedestrian closures, we might set up jersey barriers in the parking lane, or use a moving lane to make sure pedestrians are safe. A lot of times construction companies have to pay a ‘lane use fee,’ so that’s one of the more challenging situations.”

“We review each project case by case, because each individual project has its different issues and challenges,” Paul St. Martin explained to me. St. Martin, St. Paul’s assistant city engineer, oversees many of the city’s most complicated detours.

Compared to a decade ago, thanks to better inter-agency regulation and more attention to nonmotorized modes, the city thinks more carefully about detours for bikes and pedestrians. (For the past year and a half, the city has signed an elaborate detour around construction on the Sam Morgan bike trail while a key bridge is reconstructed.)

But one wrinkle is that pedestrians and bicycles don’t always follow signed routes. Unlike drivers, people on foot often simply bypass signs, walk in the street, or hop fences. That unavoidable fact forces engineers to think more carefully about people’s actual behavior, rather than theoretical lines on maps. 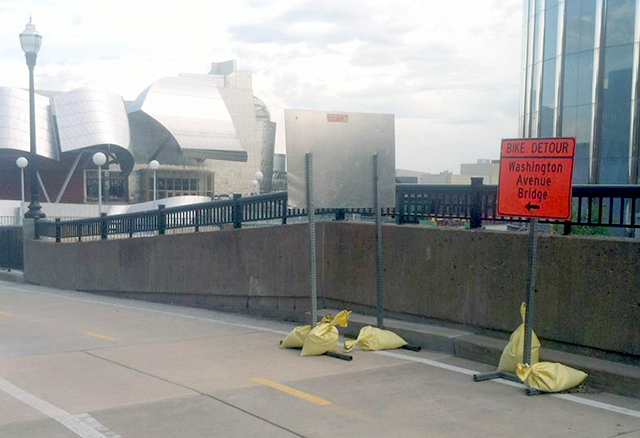 MinnPost photo by Bill Lindeke
A bike route detour on the University of Minnesota campus in Minneapolis.

“Some folks don’t want to go that extra block to take that detour route [on Marshall Avenue],” St. Martin told me. “They’re going to cross at Dayton no matter how we sign. So we put some additional signage in at Dayton, adding one of those stop-for-pedestrian signs we have in the middle of streets around town.”

Similarly, for business owners, detours are often crucial. When commercial streets are under construction, St. Paul and Minneapolis require contractors to ensure access to open businesses during working hours, which can involve elaborate walkways and late-night sidewalk replacement. These detours might make a critical difference for small business trying to survive road construction.

It might seem that detours are inevitably maddening, but compared to a generation ago, the advent of technology has shown promise in allowing drivers to take advantage of other routes. Some smartphone maps are now able to account for detours and road congestion, while technologies like “variable message signs” on freeways and shoulders offer drivers real-time information.

“About 12 years ago, we were just breaking out a handful of these variable message signs around the convention center,” Tim Drew told me. “We now have 84 of them and use them to facilitate detours. I’ve seen them work during a Twins’ game, and they’re real useful in guiding folks around a detour. The more detail you can throw out, the better people feel about it.”

Those signs seem like a great idea to me — just as long as you keep them out of the bike lane and off the sidewalk. 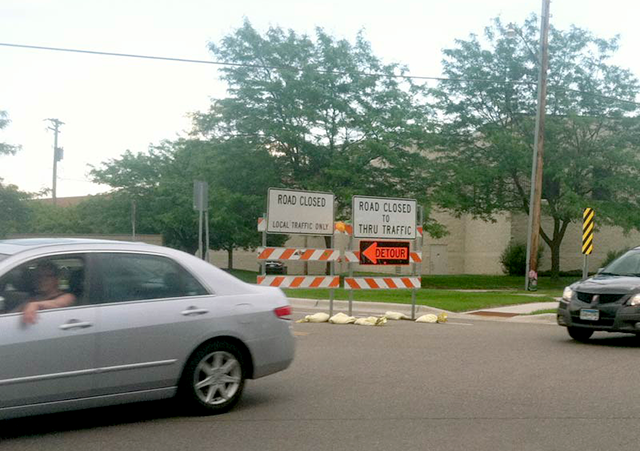 MinnPost photo by Bill Lindeke
A detour at Raymond Avenue in St. Paul.

The art and science of construction detours in Minnesota