Almost everyone just calls it “the process.”

“People just use the process to give them political indemnity and money, as opposed to using the process to actually figure out what neighborhoods need and want.”

“The process is cool in many ways. It democratizes decision-makers who have a say in recommending how we spend our bonding dollars.”

“It felt like a lot of people put in a lot of time and energy and worked faithfully within the process, and then just had all their input largely ignored.”

Those quotes — from Dan Chouma, Noel Nix and Rebecca Airmet — describe how St. Paul spends its “Capital Improvement Budget,” about $12 million each year that funds everything from sidewalks to bridges to fire stations to playgrounds.

The old saying — “Crafting legislation is like making sausages, you don’t want to see how it’s made” — must be doubly true for city budgets. But every two years, dozens of St. Paul citizens get their hands dirty allocating scarce tax dollars.

St. Paul’s CIB process began in 1967, when the Legislature granted the city power to float municipal bonds, provided citizens were involved in decision-making. An intricate dance of small-scale democracy evolved.

Here’s how it works: The city’s 17 official neighborhood groups (the “district councils”) each send representatives to one of three citywide task forces: “streets and utilities,” “community facilities,” and “residential and economic development.” These groups spend countless hours listening to dozens of project proposals (pitches limited to 10 minutes) from individual citizens, organizations, or city departments. Lastly, the task forces rank every project in their assigned area.

Next a central “CIB committee,” appointed by the mayor and representing the city’s individual state Senate districts, sorts individual rankings into one ultimate list. Using that ranking, the mayor’s office releases its own list, which is approved or changed by the City Council. Finally, the money is spent. And two years later, the process happens again.

People who have experienced the process tend to have one of two reactions: either they’re mystified and frustrated, or they optimistically grit their teeth. After all, a lot of good ideas emerge, and some of them even get money.

Rebecca Airmet, who represented the Summit-University neighborhood on the Streets and Utilities Task Force this year (for the first time), is one of the latter.

“My involvement was really great, and I learned a lot from it,” Airmet told me.  “I got to see a little bit of the inner workings of the city. It’s amazing to be able to ask representatives from public works specific questions. Anything you asked, the information was just seamlessly there.”

That kind of transparency epitomizes the promise of the process, which ideally brings difficult budgeting out from proverbial smoky rooms and into the public eye.

“A lot of things go into the basket of projects to be considered: Fire stations and police facilities are next to tot lots, rec centers and libraries,” Noel Nix, a former City Council aide, told me this week. Nix is a mayoral appointee on the citywide committee, faced with the difficult task of comparing fiscal apples, community oranges and infrastructural grapes.

“It seems on the surface like a difficult position, to rank these things against each other,” Nix explained. “But hopefully the process fosters an open discussion about how best to prioritize investments. It’s certainly educational for the task force members put forward by district councils to represent their neighbors in the process.”

After a few years of seeing how the process works, some people figure out ways to get what they want. That’s how Benita Warns, who spent years on task forces representing the Hamline-Midway neighborhood, managed to get funding for bike lanes.

“The strategies involved in sports take time to learn, and its the same with CIB,” Warns warned me. “There’s only so much money that goes around, and some projects qualify for other pots of money. So the CIB committee has to balance things across the list, and anticipate what the mayor really wants.”

Good ideas lost in the shuffle 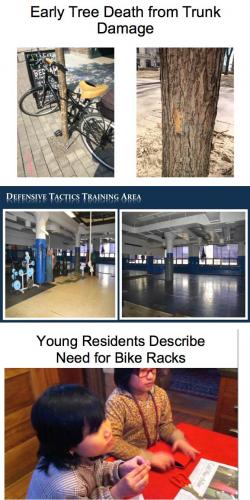 At the same time, for other people, the murky transparency of the process can really be a turn-off. When the central CIB committee releases its rankings every two years, big-ticket items often end up soaking up the lion’s share of the available money, leaving many good ideas behind.

That’s what happened to Dan Chouma, who pitched a $20,000 idea to build bike parking on St. Paul’s East Side into the process.

“It ranked really well in my neighborhood,” Chouma told me. “And by the middle of the process it was about 26th, right on the edge of being funded. But when they announced the [overall] rankings, the police shooting range had moved up from No. 29 to No. 5. So now there’s only room for eight other community proposals and it was cut off.”

Meanwhile in Lowertown, first-time project pitcher Jim Ivey had the same experience with his  $98,000 proposal to install tree guards on fragile young downtown trees. It’s an idea that, according to Ivey’s calculations, would “pay for itself almost immediately” in cost savings of tree replacement.

Though Ivey had served on CIB task forces before, the process still frustrated him. Like others that I spoke with, Ivey would like to see the process start to account for cost effectiveness.

Because the process pits individual citizens with small ideas against city departments with paid staff (like public works, fire or police), the budgetary deck can seem stacked.

“You have all volunteers, nominated by their neighborhood, going in and competing against people who are professionals, who are paid to be there, and have the weight of the city behind them,” Chouma told me.

That’s how you end up with a committee choosing among a park, a crosswalk, a fire station, and a city-owned bridge that might be falling down. Both Chouma and Ivey would like to see the city department budgets separated from the community projects, so that the process didn’t pit police facilities against rec centers, and bike lanes against street trees.

“Unfortunately it’s hard not be cynical about this,” Jim Ivey told me. “It’s like the hunger games. All the districts send their representatives, and somebody is going to win, and the rest of them are going to lose. But at the end of the day that’s not the real game. The real game is that they’re all pitted against the city and its priorities.”

The other old saying — “Democracy is the worst form of government, except for all the others” — seems to apply here too. According to Scott Cordes, the city’s budget director, the process has improved over the past decade through some technological fixes, like better access to information online. And, as Cordes explained to me, balancing contrasting priorities is always difficult, whether done in public committees or in offices at city hall.

“Democracy is rarely simple,” Noel Nix said. “But these processes are critically important and it’s always important to see aspects of process where budget making and prioritization decisions get shared with a broader set of residents.”

In city budgets, as in life, no matter whether you win or lose at least you learned something.

“If my project isn’t funded, in another 2 years I’ll present it again,” sighed Dan Chouma, who still thinks bike parking on Payne Avenue is a good idea. “I try and be as patient as I can, and hope and pray it doesn’t take 25 years to do something that could be executed in six months.”

For better and for worse, St. Paul’s capital budget process throws citizens into a sausage factory