If you meet enough new people in the Twin Cities, eventually the conversation always comes up: Minnesotans are not welcoming to newcomers. Thus the famous saying, “Minnesotans will give you directions to everywhere but their house.” Or (more amusing), “You want to make friends in Minnesota? Go to kindergarten.”

The deep rootedness and stoicism celebrated by our marketable cultural myths (like “Prairie Home Companion” or “Fargo”) has a flip side that can leave newcomers, transplants and migrants out in the cold. But perhaps through conscious effort, and a few new social projects in the Twin Cities, long-tenured Twin Cities dwellers might be embracing the responsibility of welcoming.

The data on Minnesotan reluctance

There are a few key factors that drive whether a city is welcoming to newcomers. The most obvious rule is that big cities are more welcoming than small towns.

Back in 1870s Germany, pioneering sociologist Ferdinand Tönnies called this the collective sense of “community” vs. individualistic urban “society” (in German, Gemeinschaft und Gesellschaft). In the Midwest the more likely touchstone is Sinclair Lewis’ famous depiction of the social suffocation of small-town Minnesota in “Main Street.” Meanwhile, in great cities, density and diversity can combine like gunpowder to release an explosion of social creativity and jazz hybridity.

But some cities remain better than others, and the first big differentiating factor seems to be the number of newcomers and migrants, both from other cities and states, and from around the world. By that measure, the Midwest in general, and the relatively isolated Twin Cities in particular, struggle compared to cities on the coasts or in the Southwest. If you look at the maps, the “flyover” Midwest is an island of stasis amidst a sea of movement and migration.

But despite the narrative, the Twin Cities has more newcomers than stories suggest. In St. Paul, for example, 15 percent of the population is foreign-born, while only half the population was born within the state. (There’s a great New York Times interactive map on the subject.) It’s that combination of an increasing influx of newcomers and a reactively large population of “native Minnesotans” that makes the conversation on welcoming so difficult in the Twin Cities. 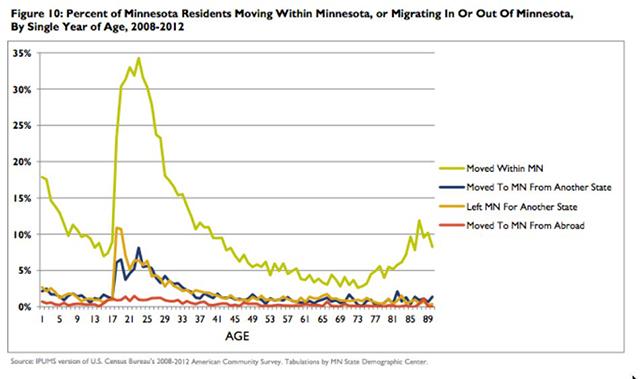 Source: Minnesota State Demographer
Despite the narrative, the Twin Cities has more migration than the stories suggest.

Social capital, for better and for worse

The second big factor is more cultural and less tangible. According to many people, there’s something unique about the Minnesota social patterns that makes it almost impossible to make new friends.

In his famous 2000 book, “Bowling Alone: The Collapse and Revival of American Community,” Robert Putnam identified Minnesota and North Dakota as “the capitol of social capital,” places with high patterns of social activities, ranging from voting and volunteering to picnics and softball leagues. Perhaps all those close ties come with a downside for newcomers.

On the other hand, for those willing to dive in, the social thicket can be rewarding.

“I found that the best part about being a newcomer here is all of the extra curricular activities, events, and volunteer opportunities that the Twin Cities provides,” Emma Pachuta told me. (Pachuta moved to Minneapolis from Oregon.) “It’s easy to get involved in whatever you’re passionate about — I’ve been able to make lifelong friendships through these venues Admittedly, most are from out of state, too. This is the fourth town I’ve lived in, and I haven’t found any other place offers the amount of free adventures that we do.”

But for others, the Twin Cities has long remained problematic. As Joe Mahon, a transplanted Michigander who has lived here for over a decade, puts it, “the cultural amenities are great for a city this size, and the bus system is useful. You can stay active and interested for a long time before you realize you have no real friends.”

Even if you admit the Twin Cities has a social problem, the question remains about what can be done.

Some groups have formed over the years to change the dynamic. For example, the official “Transplant Meetup” group has met since the 1990s, introducing newcomers to new people. And a few years ago, a group of University of Minnesota graduates started “Break the Bubble,” aimed at encouraging young Twin Cities folks to get past their “bubble” of social isolation and get to know each other.

According to Mariano Garcia, who organizes the Break the Bubble events, overcoming the social awkwardness isn’t that difficult.

“The premise is simple,” Garcia told me. “We ask people to leave their stump speeches or expectations behind, and just show up with an open mind, expecting to meet new people. And everybody is there for the same reason. If somebody asks you to coffee or to grab a beer, it’s not going to be weird, not necessarily a request for a job or a dating thing.”

At Break the Bubble events, held at bars around town, people fill out nametags with “icebreaker questions.” For example, this week’s event asked people to identify their “unique talent.” (Mine is being able to sing a song listing the U.S. presidents in order.)

Of course events like these fall victim to the same kinds of social segregation — age, race, ethnicity, income — that pervade so much of the Twin Cities culture. But for the hundred or so folks attending the monthly gatherings, those in the “bubble breaking bubble,” it seems to work.

(The next event will be at The Third Bird in July.)

Over in St. Paul, Jun-li Wang, an artist and consultant, is crafting schemes about how to bring newcomers together. Wang was recently awarded two grants from the Knight foundation for her projects – Rolling out the warm welcome hat and Minnesota Nicebreakers — aimed helping St. Paul become more welcoming. For Wang, it all started with a magic hat.

“During the polar vortex winter two years ago, I happened to buy a fake fur-lined hat on sale,” Wang told me this week. “I put it on, and it made a huge difference. I’d already been in Minnesota for over 10 years and I wondered, how come nobody had told me!”

Wang’s idea was to not let her mistake happen again, and is going to be giving away hats to newcomers at a series of “welcoming events.” The first one is set for October, just in time for winter, part of a larger project called “Saint Paul Hello” aimed at opening up the famously stubborn city. 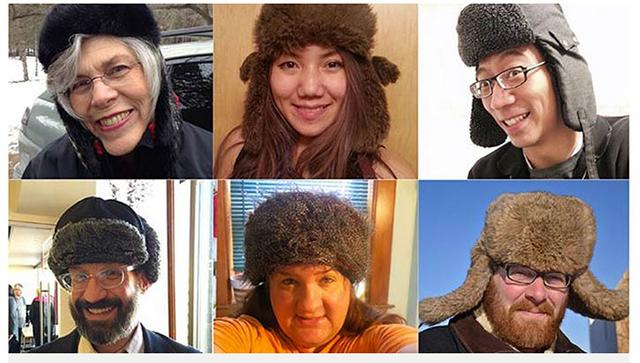 Courtesy of Jun-li Wang
Jun-li Wang (along with the St. Paul mayor’s office) is going to be giving away hats to newcomers at a series of “welcoming events.”

“I really see this as applicable to the whole state, or anyone who moves here newly or returning,” Wang explained. “When you live in a certain culture, even if you recognize it’s different, it’s also really easy to fall into that track of being complacent. Through these projects, we can make that better, and share the responsibility to be welcoming.”

Shifting from reserved to outgoing

In Minnesota, for many people the social climate is as cold as the meteorological one. If you dwell on the Twin Cities’ relative homogeneity, geographic isolation and intimidating winters, the social scene can seem bleak indeed, particularly if you throw in a dash or two of unsmiling stoicism. At the same time, the Twin Cities summers can be overflowing with outdoor activity, and the amount of diversity in the Twin Cities is easily overlooked.

If Wang and Garcia are right, and keep up their challenging work of bringing people together, maybe they can push the Twin Cities just a bit further into embracing welcoming. I’m sure some people will never want to chat in the grocery line or strike up conversations with strangers. But by drawing attention to the Twin Cities’ sometimes alienating social fabric, maybe we can begin to open up and make new friends.