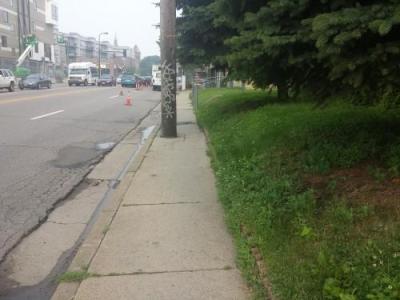 Courtesy of Melody Hoffmann
Imagine that you’re in a wheelchair on Franklin. How would you get around?

Next time you’re walking around town, stop and look at the sidewalk under your feet. Notice the cracks, the curbs, the placement of poles. Now imagine that you’re in a wheelchair. How would you get around?

For people with full mobility — legs, eyes, and arms at full strength — it’s all too easy to forget about thousands of Minnesotans with disabilities. But 25 years after the passage of the landmark Americans With Disabilities Act (ADA), the effect of the federal legislation on city streets still leaves a lot to be desired. With results on the ground lagging behind the equity rhetoric, advocates are brainstorming new ways to improve Twin Cities sidewalks.

How has the ADA changed the city?

“Tons of stuff that for sure have improved, but you always have to keep your eye on these things,” Rick Cardenas told me this week.

Anyone in St. Paul working on disability issues knows Cardenas, who has spent decades trying to ensure that streets, businesses, and public institutions are accessible to people in wheelchairs. When Cardenas started working on disability access, living on St. Paul’s East Side, the transportation landscape was grim.

“It’s having to go down the street,” Cardenas explained. “If there isn’t an adequate curb cut, then you’re riding out onto the street. If the curb cut doesn’t look like it’s safe, you go on the street. Maybe you hit an alley to get up on a sidewalk. You never know what’s on the corner. It’s a safety issue.”

ADA rules have led to a great deal of progress, at least around the more obvious issues of transportation. Two sections of the legislation — Title II and Title III — are focused on making sure that public institutions like Metro Transit, and the city’s complex urban landscape, are safe for everyone.

But it’s slow progress. Cities are only required to install ADA improvements like right-angled curb ramps, or sidewalks with “approach pads,” when major work is being done. During more superficial changes, like St. Paul’s rushed “terrible 20” street resurfacing projects last year, money for ADA sidewalks isn’t always on the table. 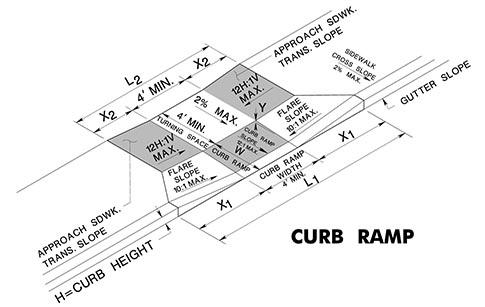 New Jersey DOT
Cities are only required to install ADA improvements like curb ramps cut at right angles, or sidewalks with “approach pads,” when major work is being done.

The latest change in the legal landscape of disability is something called the Olmstead Act, based on a 1999 Supreme Court decision that ensured the right of “community integration” for people with disabilities. The goal is to provide more than bare-bones access — to accommodate a full range of lifestyles instead of confining people to isolated care centers.

“We want measurable goals,” Kristen Joreby, the assistant director for Minnesota’s Olmstead Implementation Office, told me. “The basic goal is to provide options and accessible transportation, so that people have cost-effective and accessible transportation choices that support the essential elements of life, such as employment, housing, education and social connections.”

Minnesota’s Olmstead plan takes on the difficult job of taking the ADA project into its next phase, where it ensures not just technical details about elevators and ramps, but actually improves quality of life for people with disabilities.

Since a 2011 court settlement called the “Jensen decision” [PDF], Minnesota’s “Olmstead Subcabinet” has brought together state agencies to think more holistically about mobility, so that, in theory, all the pieces of the built environment work together to provide options for everyone.

“Agencies have transition plans that they think about as they look at each project, ” Joreby told me. “But this is not overnight change. This will take many many years. As they celebrate 25 years of the ADA, Olmstead is a much newer kid on the block. It will take us some time to get up to speed as well.”

Moving past the checklist

Chuck Marohn lives in Brainerd, and grew up with a disabled father who had trouble walking thanks to the effects of childhood polio. He now runs a national nonprofit called Strong Towns that focuses on improving cities’ transportation and land-use decisions.

“If we look at the ADA in its totality, what we’ve done is beyond honorable,” Marohn told me. “We’ve said there’s a segment of our society that weren’t treating compassionately, and we’re not fully understanding their needs. And we got with it, and it’s been a triumph.”

Still, he sees a lot of ADA dollars being wasted along otherwise unwalkable roads in the middle of nowhere while streets in pedestrian-heavy areas remain neglected.

“Like any top-down regulation, a lot of times [the ADA] gets boiled down to checklists and bureaucratic regulation,” Marohn told me. “There are a lot of times when MnDOT has standards about how a signal will go in. It will detail all the ADA elements, the lowered curb, the rumble strip, the different things for people with vision impairments. It’ll have all this stuff and they’ll go out and build it, but it’s out in the middle of a cornfield where there’s nobody walking anywhere.”

Strong Towns
Marohn lampoons what he calls “the case of the pimped-out roundabout,” an expensive ADA-compliant sidewalk in the middle of nowhere.

While it’s easy to find places where ADA improvements seem silly, figuring out what to do about them can be difficult. One of Marohn’s key pieces of advice is that transportation engineers should spend more time listening to people with disabilities about what they want, and where they want it, instead of blindly following a top-down checklist.

“So often an engineer who is never using these facilities is the one designing them with a little form which says ‘include that and follow this standard’ without understanding how humans will actually use them,” Marohn told me.

Back in St. Paul, Carol Swenson agrees. Swenson leads the District Councils Collaborative, a coalition of Minneapolis and St. Paul neighborhood groups working on improving access to the Green Line light rail. Swenson argues that special accessibility committees are often dead ends for reform, and that what cities really need is to include the perspectives of people with disabilities at every level.

“If [disabilities advocates] have a commission or committee, then other people don’t really have to think about it,” Swenson told me. “A project just gets referred to that group, and that becomes the end of it. It’s a way for people with authority and responsibility to say they’re doing something, but if you talk to [disabilities advocates], a lot of them feel like they don’t have a lot of power.”

In response, Swenson’s DCC began walking the walk. Last year they commissioned a study that put together a team of people with disabilities to closely examine the sidewalks around the Green Line. And they generated a depressing list of problems that maps rarely capture, including:

Over by Big Lop Liquor on Snelling, big chunks of sidewalk were missing. These are really bad conditions for a person using a wheelchair, because they slip in those potholes. It becomes difficult, and their wheels get stuck and it becomes challenging to get down the sidewalk.

There are many more examples. Despite the billion-dollar investment in sidewalks and transit, connections along Dale Street, Hamline Avenue, and Lexington Parkway remain full of problems of broken sidewalks and debris.

“[ADA maps] were incomplete,” Swenson told me. “It’s just looking and doing a survey from a different perspective that an able-bodied person frequently doesn’t think about. We’re beginning to understand through [this kind of] access survey that it’s much more complicated. ADA alone doesn’t make a place accessible.” 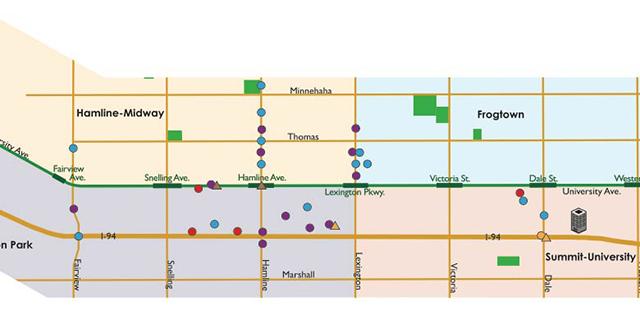 My grandmother spent the last decades of her life in a wheelchair, living with muscular dystrophy that had been eating away at her mobility her whole life.

Years ago, on a visit before she died, we planned a trip to see family about 100 miles away, and grandma was determined to take the bus. Getting her into and out of the family minivan had always been a challenge, and when she’d used the bus company before, its wheelchair ramps had worked wonderfully. To keep her company on the ride, I bought a ticket to sit alongside her and listen to her stories.

But when the bus showed up, it turned out not to have wheelchair ramps at all. Stuck at the station, the beleaguered bus driver and I ended up carrying my grandmother to her seat by hand. I still remember the look on her face as I held onto her ankles, as the driver hoisted her heavy body up the narrow stairs while she struggled to stay inside her Sunday dress.

As we rode south through the prairie, it was a long time before she was able to say anything again. The indignity of disability can be a hard thing to swallow.

25 years after the ADA, sidewalks still speak louder than words