A downtown Minneapolis sidewalk is the last place you’d expect to find an elm. But 50 years ago, both the North Loop and the Mill district were utilitarian industrial landscapes full of railroad tracks and stacked high with raw material. Today’s canyoned sidewalks of the downtown core are hardly hospitable to trunks and roots.

But downtown is changing fast. As thousands of people move to downtown apartments, they’re searching for ways to soften the city’s concrete edges. Despite the expense, and some difficult engineering challenges, trees are growing in downtown’s post-industrial spaces.

The North Loop area has seen a great deal of change in my lifetime. Its riverfront was the site of the first efforts by Minneapolis planners at reusing industrial land for urban living. Especially on the Mississippi, planners transformed huge rail yards into a quiet, almost suburban-seeming community along the leafy riverfront.

But as you head away from the river toward the old warehouse district of Washington Avenue, the North Loop loses its green. Massive brick buildings rise up, and the sidewalks quickly shed shade.

According to Fritz Kroll, it doesn’t have to be that way. 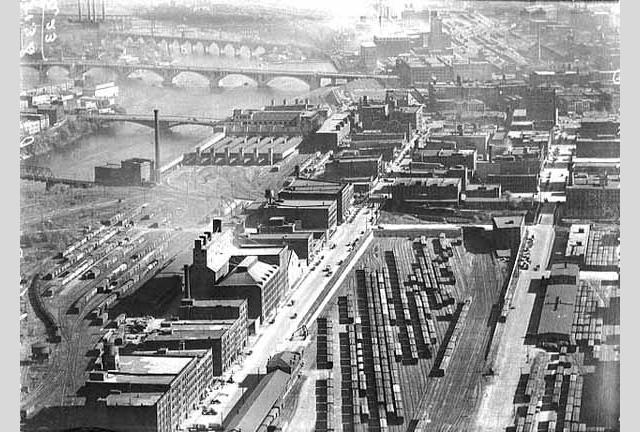 Courtesy of the Minnesota Historical Society
The Minneapolis riverfront in 1921, with few trees to be found.

“As a neighborhood, we have worked on identifying different areas that might benefit the most from trees,” said Kroll, who’s on the board of the North Loop Neighborhood Association. “We’ve approached individual building owners about their willingness to OK trees in front of their buildings, and contribute to cost and maintenance. What’s nice about our neighborhood is that most buildings are really receptive.”

On the group’s livability committee, Kroll has spent years raising money for expensive tree planting. It’s slow work. So far, they’ve planted 25 trees along Washington Avenue and 25 more on side streets in the neighborhood.

The many challenges of downtown trunks

It’s not easy being green downtown. Compared to a squirrel-filled forest, the harsh city air and extreme water conditions must push the boundaries of any sapling species. I imagine downtown trees feel out of place surrounded by bricks, buildings and exhausting traffic.

“Downtown trees thrive on neglect for the most part,” Jeff Zaayer told me this week. Zaayer is a landscape project specialist for Southview Design who works on keeping trees alive in urban developments.

“They’re under a lot of stress,” Zaayer said. “You’ve got a lot of impervious surface, not a lot of opportunity for them to get water. Radiant heat from buildings, reflected from high-efficiency glass. Urban heat islands are a threat.”

As I understand it, just as incessant noise can plague an agoraphobe, downtown trees get stressed by heat and drought. In particular, young trees are irritated by urban environments, becoming susceptible to getting sick.

“It’s a highly perishable thing at that point, to withstand the shock of being transplanted,” Zaayer told me. “It goes from a nursery where it’s being watered every day, fertilized so that it’s fat and happy. Then you take it out of that environment and plop it in a concrete jungle. They don’t like it too much.”

John Slack agrees. Slack is a landscape architect at Perkins + Will who lived in the North Loop for 11 years. He helped get the trees planted along Washington.

“For trees to grow and to get to a point where they’re mature, like in a park or a natural wooded area, they need soil volume,” Slack told me.

“It’s hard to get them that kind of soil volume in urban areas. Trees also have to deal with damage from people, from cars. They deal with air pollution. They deal with utility companies coming through and cutting off branches,” Slack said.

The botanical challenges of downtown roots mean a diversity of tactics for planting and cultivation, different attempts by arborists to engineer architectural life support.

“On Washington Avenue, what you see are traditional planting details, just a metal grate around the tree,” Slack said. “We excavated a lot of area under the sidewalk, put in the new soil, and paved a new sidewalk underneath. It’s not your typical tree grate detail.”

Walking around downtown, you can find even more elaborate tree-planting techniques outside the Humboldt Lofts building in the Mill District. The trees are covered by permeable pavers that allow rainwater to filter into the larger-than-usual soil volume under the sidewalk. 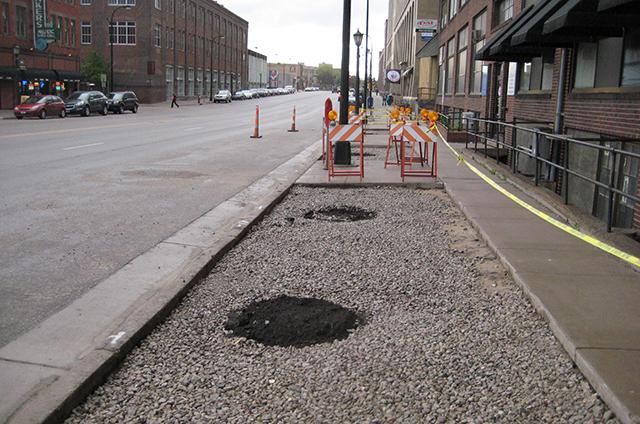 “What was done there is a hybrid,” Slack told me. “You’re taking out and removing a lot of underground sidewalk, replacing it with new soil, replacing sidewalk on top and putting in pervious pavers in between the tree grate areas.”

(Pervious pavers are a newer technology that allows water to seep through cracks between bricks and filter into the soil below.)

All this can be expensive. Buying and installing trees might cost anywhere from hundreds to thousands of dollars, but the grates and street detail can quickly double that cost, so that planting 25 trees in a downtown core is quite an accomplishment.

Post-industrial trees represent a shift in the way things get done downtown. For decades, the key actors have been the owners of office buildings or retail stores, looking to figure out ways to decrease congestion or make the city more amenable to shopping. But as more residents move downtown, the focus is shifting to livability.

“These are really initiatives being led by neighborhood groups,” Slack told me. Neighborhood associations have taken the lead, and set up a lot of public-private partnerships and done a lot of fundraising.”

And as apartments keep rising up in the old parking lots, more attention to landscaping is coming with it. For example, the remodeling of Marquette Avenue’s Soo Line building will include a bunch of new street-level landscaping. 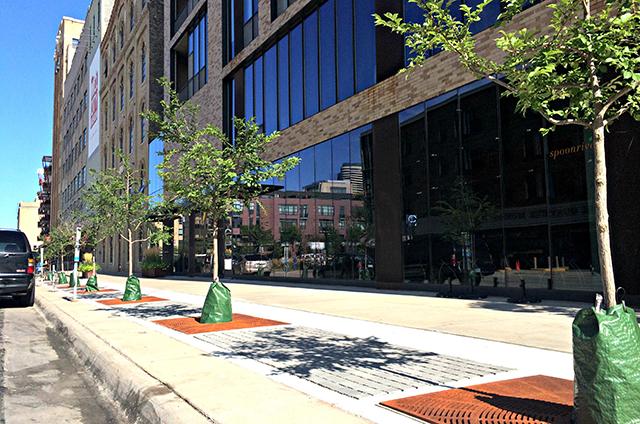 “Neighborhoods are feeling more like neighborhoods by residents getting involved in public space projects,” Ben Shardlow told me. Shardlow is the director of Public Realm Initiatives for the Minneapolis Downtown Improvement District (DID), which maintains many of the planters downtown. The DID is currently accepting nominations for its fifth annual Greening Awards, which celebrate and encourage investments in greening and placemaking. The North Loop Neighborhood Association is a past winner for its street tree projects.

“Anyone can nominate a place that they think contributes to a greener, more livable downtown,” Shardlow told me about the Greening Awards. “Nominations can be made by an email or using a simple hashtag on social media. If you’re feeling particularly inspired, send us a photo of the project that illustrates why that place improves your experience of being a pedestrian in downtown Minneapolis.”

(The hashtag is #GreenAwardsMinneapolis. Tweet away. To see past winners, go here.)

What is a tree worth? It’s hard to place value on something as ineffable as the rustling of leaves or the dappling shade.

“I think it’s a psychology thing,” Fritz Kroll told me when I asked him why he cared. “And there are countless benefits for cities and the environment. People walking through a neighborhood that has nice tree canopy might not even notice why it feels better.”