If you live in Minneapolis’ Powderhorn neighborhood, keep your eyes peeled on Aug. 14. Starting that evening, dozens of bicyclists will be circling the neighborhood on a five-mile loop, part of a marathon endurance ride that goes on for 24 hours straight. The ride is based on a popular ride in Milwaukee. For the fifth year, they’ll try to build a bridge between Minneapolis’ sometimes alienating bicycling community and one of Minneapolis most diverse areas.

The double edge of bicycling events

With our impressive cycling culture, the Twin Cities has all kinds of organized bike rides. They run the gamut from 4th of July’s No-Pants ride to regular “alley cat” races to a whole range of more laid back recreational rides.

But as anyone who has ever seen a “critical mass ride” (now largely defunct) well knows, group rides can have polarizing effects. From the bicyclist’s perspective, these rides can be transformative. Here’s a great description of a critical mass rider describing his experience, (from an academic article by social scientist Zach Furness):

I began to truly appreciate seeing the city of Milwaukee at street level, moving more quickly than walking, but without any glass or the sound of an engine between the buildings and me. I started noticing things I’d never seen before and felt the city in an entirely new way. I could feel the streets. I could feel the pavement.

But from outside the ride, things look different. According to an article last week in MinnPost (and from what I’ve read on every mainstream comment thread), if you’re behind the wheel of a car, organized bike rides can provoke a wide range of emotions, from cheers to road rage.

Clearly, the Twin Cities’ bicycling community has a lot of work to do if it wants to bridge some of the longstanding tensions around how we use our city streets.

For insurance purposes, I’m not supposed to call it a “race.” But the “Powderhorn 24” is bringing a new model of group bike rides to Minneapolis that might begin to breach the gap between insider and outsider.

Melody Hoffmann is a Minneapolis-based communications professor who researches how bicycling interacts with race and class patterns in cities, and one of her case studies has been the “Riverwest 24” ride, which has gone on for seven years in central Milwaukee. Hoffman is a big fan of how the race works to connect a diverse neighborhood.

“Organizers wanted to come up with an event that could bring community together,” Hoffmann told me this week. “They got the idea from a motorcycle race in Mexico. Local Mexican residents would come out and cheer [the racers] on for no reason. They loved that energy, and wanted to create that experience in Riverwest.”

In my experience, most bicycle rides are fairly insulated from the noncycling community. Over the years, I’ve ridden and volunteered for Alleycat rides in Minneapolis and St. Paul. Invariably, interactions with the public are rather puzzling for outsiders. For example, during a recent Stupor Bowl race (an infamous Alleycat in the dead of winter), I found myself part of a crowd of dozens pouring into the Bryant-Lake Bowl, pushing my way past puzzled diners. 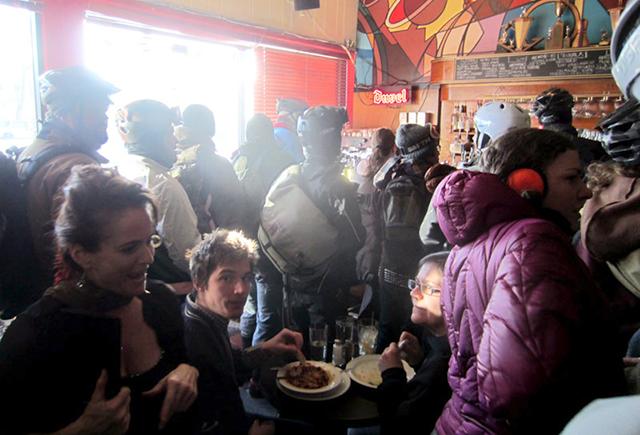 By contrast, the Riverwest 24 tries hard to get bicyclists to have meaningful contact with the neighborhood.

“The organizers are very strategic about getting all the riders to interact with the community,” Hoffmann, who has done the ride for the last five years, told me. “You’re forced to talk to neighbors and participate, [and] if you’re interested in winning the event, you get all these bonus laps for doing bonus checkpoints. You’re dealing with community members you’ve never met before.”

Photo by Melody Hoffmann
For both 24-hour rides, riders get bonus points for a specially designed annual tattoo. These two are from Milwaukee’s RW24.

Bonus stops and the bike community

For the past five years, bicyclists have tried to insert a bit of Milwaukee into the heart of South Minneapolis. But there are a few differences that make such a translation challenging.

“Minneapolis has is a larger bike community, hands down,” Kaytie Kamphoff told me. Kamphoff, a schoolteacher, is a former Milwaukee resident, who has been trying to shape the Powderhorn 24 ride to mirror what happens in Milwaukee.

“In the second year, word got out, and made it more of a race than a ride,” Kamphoff said. “But I tell people it’s an endurance ride. I did like 30 miles; the next year I did 75; the following year I broke my own record and did 100 miles. It’s not to win, it’s just to see how far you can take yourself.”

The rules are pretty simple. Whoever has the most laps along a five-mile circuit at the end of a 24-hour period wins. While some people ride solo — imagine an eternity spent circling on a bicycle, sometimes over 300 miles in a single day — most riders take turns, riding in teams of up to six people. Some sleep, some ride, hopefully nobody does both.

But the real key to the ride is are the “bonus stops,” which garner extra “lap” credit that can make the difference for the winners. These can be anything from participating in face painting to pottery to yoga to stopping into a neighborhood business. Bonus stops are the key to the community engagement aspects of both 24-hour bike rides.

For example, though she’s lived in the area for years, Kamphoff never knew about a Powderhorn gaming shop called Monster Den until it became a bonus stop during a PH24 ride. And according to Kamphoff, the most popular bonus stop last year required riders to park their bikes and go into a senior living community.

“At the Minnehaha Senior Living Center, we had riders get off their bikes and engage with residents in the community for 15 to 20 minutes, Kamphoff told me. “One rider told me how he met a resident whose parents were part of the Danish resistance during World War II. His dad bombed train tracks to stop the Nazis from bringing weapons into Denmark.”

Because the ride lasts all day, for the vast majority of riders, there’s no particular hurry. Unlike the frantic experience of most organized rides, people are far more likely to relax and chat.

Riding through the night

Another unusual dynamic is the all-night experience. Much like the June Northern Spark festival, the PH24 catalyzes new temporal rhythms.

“At night it definitely slows up a little,” Kamphoff told me. “But we still have community members who set up tents in their yard, and in Powderhorn compared to Riverwest, we have a lot more solo riders. So I see them at every single stop. I am always told we need more bonus stops at night.”

The bonus stops are a closely guarded secret, and aren’t announced until the start of the ride. Unlike the Milwaukee race, which fills up right away, there’s plenty of room for more people to check out the Powderhorn 24 ride.

You won’t know what you’re getting in to until you try. And for those of you in Powderhorn, get ready for an unusual day.