I still remember the sickening feeling in my stomach when I realized my cat had escaped. I was hosting the family tabby for a few days when a roommate left the door ajar. The next morning, the cat was gone and I felt horrible.

My sister and I spent three days looking for Ed. We made posters and put them up all along St. Paul’s North End streets, knocking on doors and meeting neighbors. But after three long December nights, Ed remained lost.

By my rough estimates, there are hundreds of thousands of cats and dogs in the Twin Cities, and that’s not counting strays. Odds are pretty good that a bunch of them are lost at any given time, but that is little comfort to a pet owner who’s just discovered that his dog or cat has disappeared.

How Rocky got away 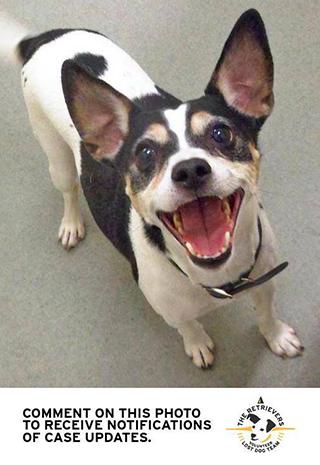 Courtesy of The Retrievers
The hunt for Rocky continues.

Dan Conybeare knows how it feels when an animal slips out of your hands. He was just getting to know Rocky when the black and white rescue rat terrier escaped onto the streets of St. Paul. Dan had only had the little dog for a few hours, but he’s spent most of his free time over the last two weeks trying to get Rocky back into safe hands.

“I don’t know,” Conybeare told me when I asked him if he’d ever get Rocky back. “I try not to really think about that too much anymore. I was feeling so desperate early on. I accepted that we my never find him and may never know. But I’m hopeful. Saturday we had our first really solid sighting in five days, and had another potential sighting today.”

That was Tuesday. This week, the hunt for Rocky continues.

It turns out there’s a whole world of lost-animal hunters out there, and one of Conybeare’s first moves was to mention Rocky on the popular Lost Dogs Minnesota Facebook page. That’s when he connected with The Retrievers, a crack nonprofit team of dog detectives who’ve been organizing searches throughout Minnesota for over a year.

The first step is for people who have lost dogs to fill out a short form detailing the escape. Then The Retrievers assign a volunteer case manager, from one of many regions throughout the state and metro. Rocky’s case manager is a woman named Natalie Wicker, who has been coordinating volunteer hunting help.

And so for the past two weeks, Rocky signs have popped up all over town. I noticed my first one about two weeks ago in St. Paul’s South St. Anthony Park neighborhood. Then I saw one along Summit Avenue. Then I saw another on Lake Street, and again on Franklin over in Minneapolis. When I saw one near Fort Snelling a few days later, and I began to wonder. Just how many Lost Dog Rocky signs are out there?

“I’ve personally made 70 signs,” Dan Conybeare, Rocky’s woebegone caregiver, told me. “I think the rest were made by The Retrievers, basically all one woman [named] Diane, who made about another 60 or 70. And I had some help from my girlfriend.”

(I’ve been asking friends to send in photos. The farthest sign that I’ve heard of is located along the I-494 bridge in Eagan, though these days most Rocky signs can be found in South Minneapolis’ Longfellow and Seward neighborhoods.)

“I’ve been doing it in waves,” Conybeare said. “Most of my free time over the last two weeks has been spent getting supplies and making the signs. I did about 15 on Saturday, and including getting the material, making and posting them, it probably took six hours.” 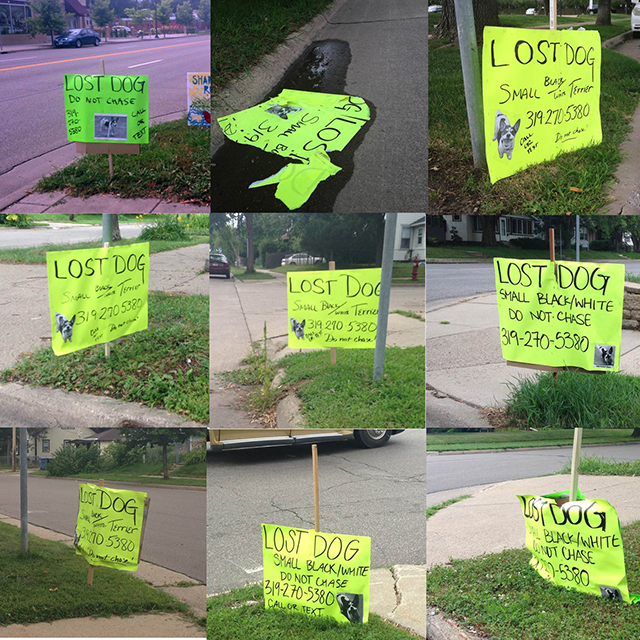 MinnPost photos by Bill Lindeke
“Rocky” signs have appeared all over town.

The Rocky signs all share one unusual detail: Each declares “DO NOT CHASE” in clear letters alongside the terrier’s picture. I’ve seen a lot of lost dog signs over the years, by I’d never noticed such a prohibition.

It turns out that chasing a lost dog that’s alone in the city is the wrong move. According to The Retrievers, companion animals are often deeply disturbed by newfound freedom, and their animal instincts take over.

“Lost dogs are very often highly insecure and operate from a mode of fear,” Devon Thomas Treadwell, who helps run The Retrievers, explained to me this week. “We call it survival mode. What they need most is security, food and water. When they’re operating in that survival mode, they can perceive every human, even their own owners, as a threat. So when you chase a [lost] dog, you just reinforce his belief that every human is a threat.”

The goal is to help the lost dog become comfortable within a city block or two, to make it easier for the dog detectives to track him.

And the reason for the wide net of Rocky signs has to do with the pup’s rambunctious path through St. Paul and Minneapolis. At some point, Rocky went over the Marshall/Lake Street bridge.

“Rocky is a little stinker because he started out being lost in St. Paul,” Thomas Treadwell told me. “Normally, the river provides a natural boundary, but he crossed the Lake Street bridge, and now we have confirmed signs of him on Minneapolis side. It is unusual.”

(That said, the Lake/Marshall bridge was the site of one dramatic Retrievers reunion last year. Eddie, a runaway golden retriever, was retrieved crossing the Mississippi when a passing jogger “clotheslined him” on the bridge. A volunteer team was on hand to quickly rescue the pup from the busy street.)

“It’s both good and bad in the city,” Thomas Treadwell told me. “There are more risks to the dog because of traffic. We like to see them brought in as soon as possible, but on the other hand, we have more people out and about who can see the dog and report on the dog and keep track of its whereabouts.”

The end goal is to help the dog feel comfortable within or two blocks, where The Retrievers then lure the lost pup into a humane trap that they’ve designed. The latest model uses an optical sensor to trap the dog until a volunteer can come fetch him. 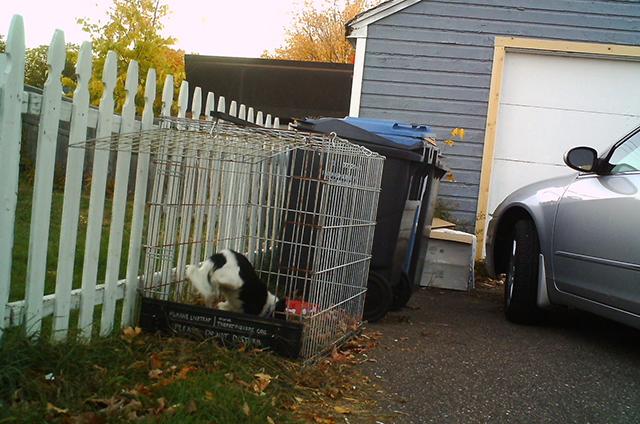 Courtesy of The Retrievers
Little Man enters a Retrievers trap, in 2014.

Back to our cat

When Ed escaped, after three days of posting fliers and knocking on frosty doors my sister and I had given up. After all, he was old, it was just before Christmas, and it was darn cold outside.

But as we were getting in the car to drive away, we heard a noise. A tiny “meow” emerged from somewhere in the neighbors’ yard. It seemed too good to be true, but when we looked under the backyard porch, way back in a crevice, we saw our scared, elderly tabby. It was a great Christmas present to have Ed back. 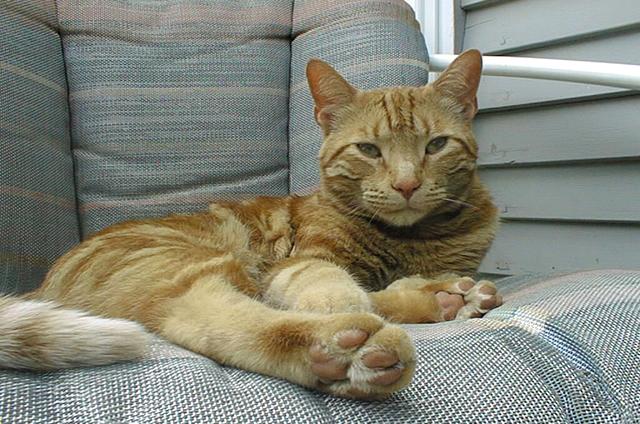 And Rocky is still out there in South Minneapolis. With all the signs all over town, Dan Conybeare gets about a dozen calls a day with advice, false sightings, and hints. And every once in a while, there’s a good lead.

“It was basically my fault that he got out, Conybeare told me.” “I got him into this mess, and I got to get him out of this. Because he can’t.”

So if you see Rocky and can get him into your fenced-in yard, please call Dan. Just do not chase.

Retrievers on the case: Tracking lost dogs in the Twin Cities