Minneapolis is justifiably lauded as a mecca of American bicycling, with its greenways, bike lanes, and recreational trails grabbing national headlines. But the unsung hero of the bike renaissance is probably not the intrepid Uptown commuter atop a Surly, but the lowly college student on a Walmart Magna. With its tens of thousands of students and staff navigating a congested urban campus, all the top intersections for bicycling all revolve around “the U.”

And after decades of neglect, where bicyclists were often treated as an afterthought (and sometimes treated like criminals), the campus has recently begun placing bicycling front and center.

But compared to “the U,” other Twin Cities campuses have a long way to go. Some still wrangle with parking problems while neglecting bicycling. Maybe the sea change at “the U” offers a way forward for the region’s other higher-ed schools.

A few years ago, there were 18,000 cars a day streaming through the University of Minnesota’s East Bank along Washington Avenue, cutting through the very heart of the campus.

“Good question,” Steve Sanders replied when I asked him what happened to all those cars. “We don’t really know. We configured some of interior streets to accommodate that traffic diverted off Washington.”

Sanders, who works as the alternative transportation manager for the school, figures most drivers have opted for the nearby interstate, which leaves big parts of campus blissfully free from car congestion. Instead of four lanes of high-speed traffic, today’s Washington Avenue features light-rail tracks (with room for buses), picnic tables, and wide dedicated bike lanes. 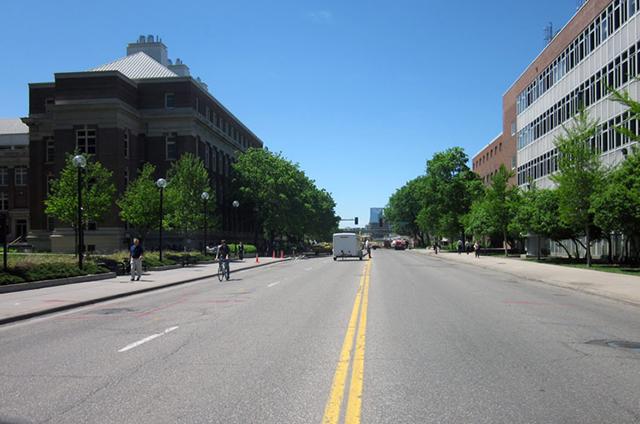 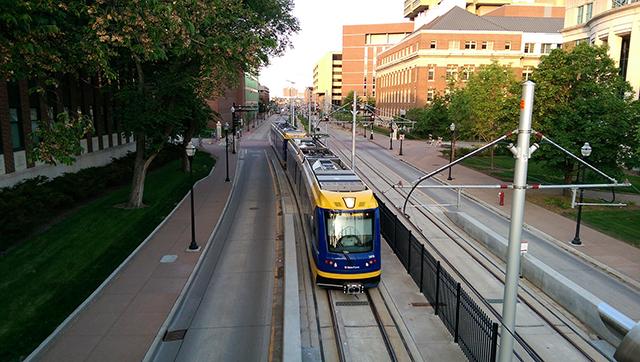 “Washington really split the campus in half, and it was a not a pleasant place to be,” Sanders told me this week. “The [new design] has been a sea change that way. The Green Line has made a huge difference; the campus just feels different.”

Before the recent changes, the university’s infrastructure was highly uneven. And when given the opportunity to fix connectivity, planners often didn’t solve problems for bicycling. (For example, the design of the recently built Science Teaching and Student Services building failed to accommodate and connect the schools’ two busiest bike routes.) Even worse were the tickets handed out to bicyclists for biking on the sidewalk, especially in places with few alternatives.

But with the new infrastructure, police crackdowns are mostly a memory, and bike lanes even run through the historic Northrup mall. To solve safety problems, Sanders’ office used interns to watch eye-numbing amounts of video data, analyzing how to solve bicycle and pedestrian conflicts at places like the busy Washington Avenue bridge (the No. 1 spot for bicycling in the whole city).

Other campus biking tactics include new high-capacity bike racks, and a “ZAP program” that provides statistics and benefits to students and staff for riding their bicycles. Now one of the main challenges is too many bicycles, not too few.

“Space is a premium,” Sanders said. “We don’t want to pave over green space, so it requires us to be more creative in how we add capacity.”

Online learning aside, university campuses are predicated on density. But density challenges for campus planners, especially given the notorious politics of university administrators, deans, and donors.

Andrea Dvorak works as the assistant director for study abroad at Augsburg College, located on Minneapolis’ West Bank less than a mile from the University of Minnesota. But Augsburg is a much smaller school with different dynamics.

“I’m not specifically an avid biker,” Dvorak told me this week. “A big part of it was figuring out the really detailed logistics. How much time is this actually going to take me? What’s the right route to go? So having to take some time to figure that out, and not having any assistance in figuring that out, probably keeps a lot of people from biking.”

A few years ago, Dvorak began bicycling to work from her house in Robbinsdale, a little over 5 miles away. She says that biking to work has involved a learning curve.

“I don’t feel like Augsburg has done something specific to keep me or help me biking,” Dvorak told me. “[But] it is an easy place for me to bike to. It’s a pretty urban area, more urban than most other private colleges in Minneapolis.”

For both employees and students, colleges and universities can be big drivers of bicycling and transit. However key hurdles like professional appearance, or time constraints, keep many potential cyclists from trying it. For many staff, showing up to work sweaty or in athletic garb is a big problem; offering showers or other amenities like secure bike storage is an important way for schools to encourage bicycling.

“After I started doing it, [I started] getting exercise in and stress relief that comes with it,” Dvorak told me. “Bicycling wakes me up really well in the morning, and if I had a stressful day, I’m done with it when I get home. That’s not usually the case when I drive.”

Can Cleveland Avenue be a campus catalyst?

For universities, bicycling is more than therapy. Most institutions deal every day with tensions between campuses and surrounding neighborhoods over things like noise complaints, traffic and parking.

On the face of it, St. Paul’s Cleveland Avenue would seem to have a lot of promise for solving the persistent parking problems around University of St. Thomas. The street goes right alongside the main campus that boasts more than 6,000 students.

But at the recent St. Paul public hearing on whether to install bike lanes on Cleveland, St. Thomas spokespeople testified against the plan, stating that there was too much traffic and that the route would be unsafe.

“We are really big on bikes,” Doug Hennes, the vice president of university relations, told me. “We have encouraged students particularly over the last 10 years to use alternative ways to get to campus and not drive, and for many of them that ends up being bikes, bus passes, walking.”

Hennes pointed out that St. Thomas does try to encourage bicycling through student groups. And the school conducts counts of bikes on racks. Recently the school counted an average of 400 bikes locked up at racks during the day, and has installed bike share stations on the edge of campus. 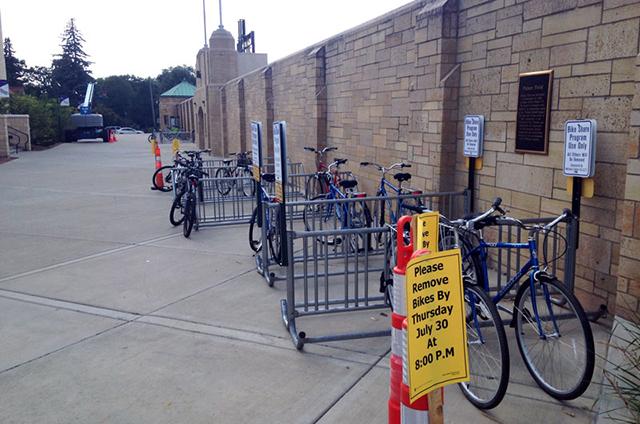 After the public hearing, when faced with opposition from the school, St. Paul recommended delaying the bike lanes. Hennes would rather see bike lanes on nearby Prior, which he explained could have sharrows painted in the road.

“We feel more strongly about Prior [Avenue] being a better fit for two reasons,” Hennes said. “We think it’s significantly safer for bicyclists right now. Traffic counts on Cleveland run between 9,500 to 11K cars a day.”

Bikes as a solution to the town-gown parking problem

With thousands of young, financially limited students and lots of limitations on space, university campuses are the ideal place to promote bicycling, especially given persistent parking squeezes that force many nearby neighborhoods to adopt onerous “residential parking restrictions” on nearby streets.

“Parking gets to be really expensive,” Steve Sanders told me. “It’s difficult to locate and takes up valuable real estate that can be used for higher purposes. We’re really at a point where we’re trying to manage the demand and provide people alternatives so they don’t feel they have to drive a car to campus.”

Biking down Cleveland Avenue these days feels a lot like Washington Avenue did years ago. Given the recent sea change at the University of Minnesota, over the next few years it will be interesting to watch whether the U’s example trickles down to the smaller Twin Cities schools. After all, whether you plan for it or not, you can be sure that students will keep riding their beat-up mountain bikes to get around.