Years ago, when I was living in St. Paul’s North End, I happened across a film shoot. Needless to say, a Hollywood crew is quite unusual on hardscrabble Rice Street, so I sat and watched for a while as they filmed a scene for the Coen brothers’ “A Serious Man.”

As the owner of Rice Street’s Do It Best Hardware described it at the time, the crew gave the store’s trim a new coat of paint, and replaced all the signs with 1960s-era fonts and technologies. (On Rice Street, with its handful of preserved two-story shop facades, it doesn’t take much to imagine the past.)

Film shoots are certainly exciting, especially in a sleepy St. Paul neighborhood. But other than a good story and some temporary excitement, it’s not always clear what impact a film location might have. Maybe that’s enough.

Unfortunately for this story, “Wilson,” the latest Twin Cities movie, had everyone involved sign nondisclosure agreements. But that hasn’t kept me from trying to track down the movements of Woody Harrelson and Laura Dern over the summer. The film was shooting in town throughout July, and just wrapped up a few weeks ago by renting out The CC Club on Lyndale Avenue. 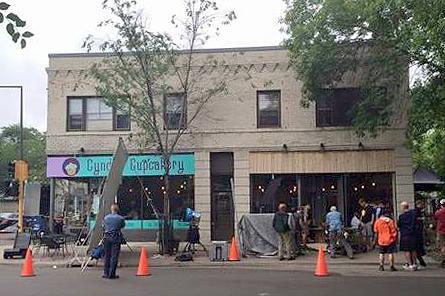 Tipped off by a friend, I watched as the crew took over the quaint Hampden Park Co-op in St. Paul’s South St. Anthony Park neighborhood one evening. They sent the grocery staff home early, and began moving coolers and reconstructing whole new sets of vegetable shelves. Then they painted over some of the windows with corn syrup and added some cute drawings of vegetables.

They were gone the next day, though the window art remained.

Earlier, in June, the film crew took over the corner of Hamline and Thomas, in the Hamline-Midway neighborhood. The folks at Groundswell Coffee, where a scene was shot, admitted it was fun (though they aren’t allowed to talk about it). The crew renamed the café Cyndi’s Cupcakery (for some reason), and shot some interior scenes there before moving on to an establishing shot or two in front of the Martial Arts studio, Master Nick’s Tae-Kwan Do.

(According to Nancy Fisher, who lives about a block away, Harrelson was sitting in the far window seat of the third room.)

The next day they had moved on to shoot exterior shots up the street.

It’s kind of amazing to think that a film crew might completely remake a store for only a few hours, but that’s exactly what happens. Less than a mile west of Rice Street, the other famous North End film location is the Half Time Rec, the old Irish bar on Front Avenue with bocce courts in its basement. (I used to go square dancing there as a kid, believe it or not.) It was used for a scene in the 1993 film “Grumpy Old Men.”

“Someone involved in making decisions for the film was in the Twin Cities to scout out locations,” Steve Mars told me this week. “He came into the Half Time Rec because of the live Irish music; he didn’t come with the intent of looking at it for a possible site.”

Mars has only owned the place for the last six years, but as he tells it, the location scout was impressed at the bar’s annual Christmas decor — Christmas lights hanging from the ceiling and wreaths on the wall. Because the movie was going to be set during Christmastime, they picked it for a future scene with Walter Matthau and Jack Lemmon. 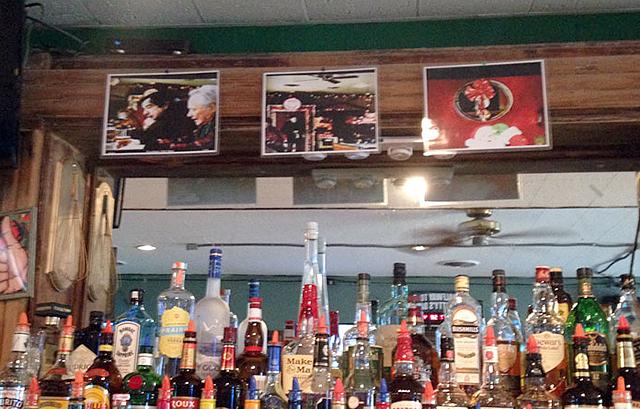 MinnPost photo by Bill Lindeke
The Half Time Rec has photos of the 1993 film “Grumpy Old Men” still hanging above the bar.

“It’s not noticeable at first glance,” Mars explained when I asked him about the final cut. “They put up temporary walls, and brought in their own props. But there are few key elements, so that you can tell when you watch the movie. The most notable is the interior door. It’s a red door with a small window that is still there today.”

It’s been over 20 years and Mars said that they still get people asking about the film shoot, maybe once a week. Now that the Half Time has spruced up the joint with a full kitchen (and great food), the red door with the round window might be the only thing left.

Remembering the tax credit era at the Half Time

If you talk to anyone in the local film industry, the ’90s were the golden era. “Grumpy Old Men” was just the tip of an iceberg that included “Mighty Ducks,” “Jingle All the Way,” “Beautiful Girls,” and the (under-rated in my opinion) “Feeling Minnesota,” which featured the now-demolished St. Paul High Bridge coal plant smokestack in its advertising posters.

“In the days when we had our big run of Hollywood films, there were no incentives in the world,” Lucinda Winter told me. Winter is the executive director of the Minnesota Film and TV Board. The board is the official interlocutor for production companies, which now rely heavily on a geography of competing tax incentives and rebates. 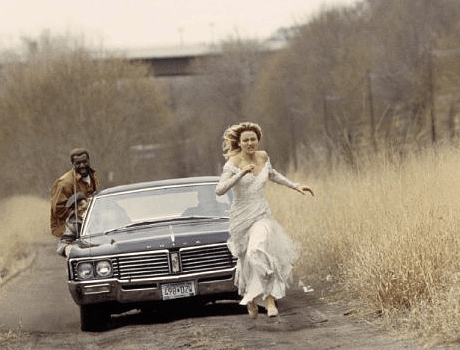 “Since about 2000, that universe of how location decisions are made has completely and utterly changed,” Winter told me. “Because of changes in technology, like smaller cameras and equipment, film and TV production can be located pretty much anywhere.”

That has meant that states and countries now complete fiercely for film productions. (One such competitor is Canada, which has incentives at both the federal and local level. You might have noticed that the recent FX television remake of “Fargo” was shot entirely in Calgary.) In Minnesota, the so-called “snowbate” program that rebates up to 25 percent of production costs, has been a political football over the years. It was defunded a few times since the Pawlenty budget cuts in the early 2000s.

But in 2013, the Minnesota Legislature allocated $10 million for a new snowbate program and Winter has spent the last couple of years on the phone, working hard to get more productions to the Twin Cities.

“This was the largest feature film in terms of budget that we have attracted since the rebate came back online,” Winter told me. “It took us a bit of time once we got the money to get back on the radar, a lot of sales calling. But there’s no question that [the Wilson crew] came here because they were able to access the 25 percent Snowbate incentive money.”

If you actually watch for the Rice Street scene in “A Serious Man,” the answer is, “not much.” I liked the movie, but as I kept watching for a glimpse of St. Paul’s Rice Street, I finally saw it on a “blink and you’ll miss it” moment when Sy Ableman is driving down a main street.

Film shoots are inherently temporary, and the jobs, celebrities, and window dressing quickly fade away, and all that’s left are the stories.

“It comes up every couple of weeks; it’s a cool history about the place,” Steve Mars said. “I often end up spending several minutes talking about how it came about, because people are interested in that kind of thing for whatever reason. The bar itself has been around so long. It has its own history besides the movie connection, too.” 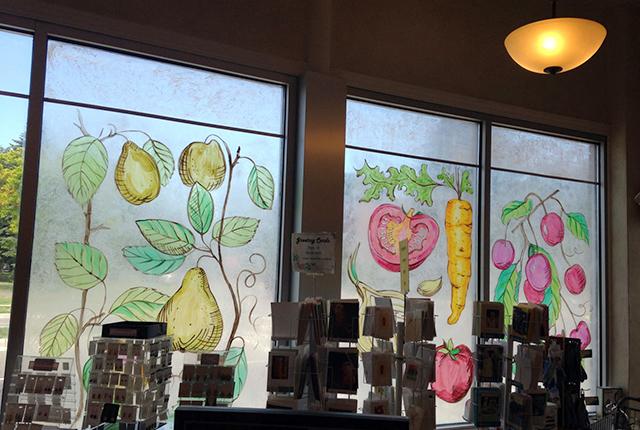 MinnPost photo by Bill Lindeke
The next day, the Hampden Park Co-op’s windows still sported vegetable drawings, though the crew members who drew them were gone.