“Any story you write has to include dog-poop controversies and a round of ‘gun shots or fireworks?’ ”

That’s the first reaction you get when you ask people on the Hamline-Midway Neighbors Facebook group what makes a good neighborhood page. And it doesn’t end there: Neighborhood Facebook groups are full of debates over lost dogs, bike lanes, stolen trucks, and kids who need to get off of the lawn.

Even though millions of dollars are spent on community engagement and outreach throughout the Twin Cities every year, for most neighborhoods engagement doesn’t happen in a community meeting. The real action is on Facebook.

Facebook groups range in scale from blocks to entire cities, and run the gamut from positivity to open marketplaces to discussions that include thinly veiled racism.

First off, it’s important to point out that there’s a difference between Facebook groups and Facebook pages. Most community organizations have Facebook pages, but their content is narrowly controlled by page owners. Neighborhood Facebook groups, on the other hand, allow any member to post, and have unmoderated discussions that can sometimes spiral into cycles of negativity.

“All the media talk about is how scary it is,”  Dannette Allrich, told me. Allrich, who lives on St. Paul’s East Side and runs a day care, founded the Positively East Side St. Paul Facebook group after she was kicked off of a larger East Side page for raising questions about racism. Though her new page is much smaller, it’s growing steadily.

“The big East Side page is so negative,” Allrich said. “People just bash the East Side, so why don’t we send more of a positive message? I’ve lived here for 15 years, and ran the day care for 10 years. There’s nothing scary about it. If more of us that talk about that, maybe somebody will listen and figure out that we’re normal people.”

The East Side is not the only place that struggles with discussing sensitive issues like race. The one that I follow most closely, West 7th Is Where The Cool Kids Hang Out, often rubs me the wrong way when people post pictures of black youth walking down the street. In areas that struggle with crime, this kind of tension can start to dominate the conversation.

Here’s the beginning of a recent post on North Talk, a popular Facebook Group in north Minneapolis.

“Car just sitting there for over 30 minutes, driver inside, right across from my house. Do I approach it? Call 311? 911? Seems sketchy to me.”

As you read through the comments, you find an extended discussion on whether the neighbor should call the police, whether one should confront prostitutes and their pimps, or whether it’s OK for a person to just sit in a car. Some comment that they pull over and park to check text messages and reply, etc. (The story ends when the man walks out of his house to do yardwork, and the driver quickly drives off.)

The question of racial profiling lurks beneath many discussions on Facebook group pages, and whether the pages tackle those delicate issues has evolved into an ongoing debate on Facebook.

Jeff Skrenes, the founder of North Talk, started his page as a way to bring together parts of North Minneapolis that rarely come into conversation. Like Allrich, Skrenes’ page was born after having a comment thread about race deleted from a larger page. Since then, North Talk hasn’t been afraid to openly discuss racial tensions.

“One of the coolest things that I found happening was that there were people, whites and African-Americans, who didn’t know each other or wouldn’t interact with each other in everyday lives,” Skrenes told me. “They certainly wouldn’t have extended conversations about racial issues in the community, but yet that’s what was going on with North Talk.”

It turns out that schisms are a common occurrence in the world of Facebook groups. As North Talk grew, its focus on race led to another breakaway page, North Vent, which tends to avoid navel gazing over things like structural racism.

“It’s a fair criticism that certain commenters inject race into so much that maybe it doesn’t belong,” Skrenes told me. “And so North Vent started up. One thing that it unleashed in its conception was that a lot of people were getting kicked off of North Vent who wanted to bring race into conversations in ways that weren’t legitimate.”

Today the North Vent page, which states in its “about” section that it is “complaining its way to prosperity,” has more members than North Talk. (There’s even a fascinating “uncut” version of the page, where administrators post things that have been removed from the original Facebook group.)

Facebook isn’t the only game in town. Across the Twin Cities, different neighborhoods rely on different technologies. In many areas, sites like e-Democracy are very active, and Minneapolis’ Prospect Park has a popular list-serv full of garden tips and alleged infractions.

“The strength of a Facebook page is to get information out,” Chris Lautenschlager told me. Lautenschlager works on social media and outreach for the Marcy-Holmes Neighborhood in Minneapolis, and has been working with different kinds of pages and lists for years.

“The weakness of any neighborhood Facebook page is that there’s no real call to action, no way to implore individuals to really follow through with things. A lot of time when you post information on a project or a proposal, a lot of people will like it or share it, but that doesn’t necessarily translate into volunteerism.”

Overcoming the inherent disengagement of the Internet is a challenge that entrepreneurs have spent years trying to overcome.  The latest online engagement tool is called Nextdoor.com, a San Francisco-based online tool that restricts membership around very small communities like individual blocks or streets.

“Nextdoor is crazy growing, becoming its own thing,” said Lautenschlager, who used to work for the company as a consultant, and still maintains a few of its pages. “Every day there’s two or three more people signing up on each of the pages.”

It’s proven to be popular in places like southwest Minneapolis, where it’s become what Lautenschlager describes as a “hyper-local Craigslist,” with the majority of the action simply neighbors buying, selling, or giving away various things.

Rules for neighborhood pages vary from group to group. Some are informal, while others maintain strict restrictions on when you can post advertisements or who is allowed to join.

(They’re not always so serious. Rule #10 on the West 7th Cool Kids page: “If your profile shows that you like Nickelback, you will be banned.”) 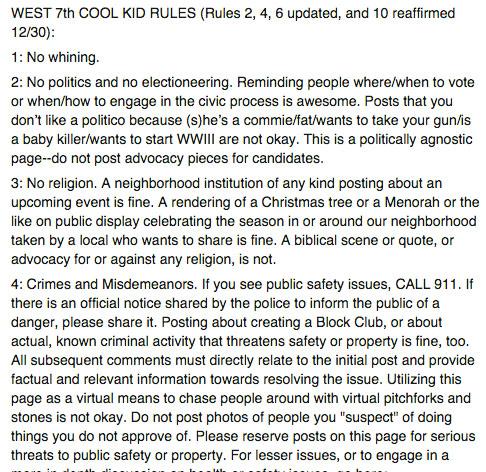 Donovan Gruebele has been one of the four administrators for the West Saint Paul Neighbors page, and says that he denies membership for about a third of the people who try to join. Often people are rejected because they have fake accounts, are obvious spammers, or because they have no connection to the neighborhood.

“We don’t have specific rules per se,” Greubele told me. “We try to keep things pertaining to West St. Paul, try to keep it within that realm of ‘where is a good mechanic?’ or ‘where should I get my hair cut?’ We don’t want to censor the group to the point where there can’t be discussion, but at same time people can’t attack other or make physical threats. That’s what we don’t tolerate.”

In the end, no amount of rules will transform a neighborhood Facebook group into something that people don’t want. Some groups are intentionally hilarious, some unintentionally so, while others seem steeped in bitterness. And through it all, moderators struggle to fo the important work of shaping the tone. And no matter what anybody does, there will always be dog poop.