In any stadium debate, people focus on the building. What percentage of the stadium would be public? What percent private? What kind of spaceship will it look like?

But so much depends on what happens outside stadium walls. If you look at the impact of the looming Vikings stadium, setting aside the mind-boggling funding details (admittedly hard to do!), millions of tax dollars are going into the surrounding infrastructure. There’s a murkily funded “public park,” tax-funded parking ramps and skyways, and even a $7M pedestrian bridge over the light-rail tracks. A lot of money is spent on so-called “extras,” and these details can make all the difference for surrounding neighborhoods.

So what is the best-case scenario for St. Paul soccer? I spoke with a few of St. Paul’s most interested parties to find out their hopes for any soccer stadium deal at the corner of Snelling and University Avenues. As it turns out, a lot depends on what happens on the periphery of the pitch.

The long-term vision for Snelling and University

No stadium is built in a vacuum, and that goes double for a city like St. Paul, where rethinking Snelling Avenue is nothing new. Ever since its heyday as a streetcar garage, the intersection of Snelling and University has been a planning hot potato.

In 2008, the Met Council passed a “Snelling Avenue Station Area Plan,” designed in close collaboration with the city and its neighborhoods, that offers an ambitious vision for what the corner might look like. Here’s the key vision for the corner:

A vibrant commercial center, both a city-wide destination and local needs hub, that successfully hosts and connects a multitude of uses. These could include corporate headquarters, retail stores, community services, local businesses, residential development, and cultural and entertainment destinations – all structured within a pattern of streets, blocks and green gathering spaces that promote safer, more active streets and balanced options for movement and increased economic vitality. 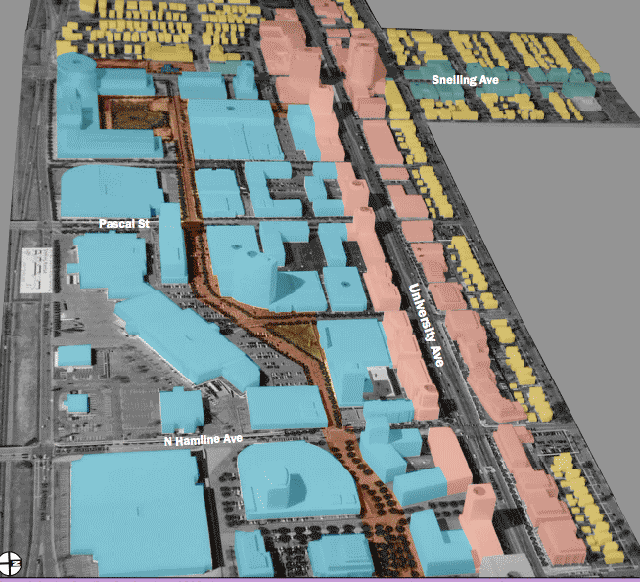 Courtesy of the Metropolitan Council
The “Snelling Avenue Station Area Plan” offers an ambitious vision for what the corner of University and Snelling might look like.

It sure sounds good, but redevelopment plans hit a snag last year when the Met Council released a feasibility study suggesting any redevelopment would require $30 million in public financing for a parking ramp. The need for more parking was particularly disappointing for planners and advocates who pushed hard for transit in the area. The corner lies at the intersection of both the Green Line and an under-construction BRT route.

Amendments to the Council resolution

At last month’s City Council meeting, Council President Russ Stark introduced a series of amendments aimed at clarifying what St. Paul would like to see from any stadium deal. The changes centered on payments for Metro Transit, creating a walkable street grid, and a clear focus on transit.

“My initial reaction to the concept of a stadium there was negative,” Stark told me this week. “Every community city process that has been done has the site turning into a high-density TOD area with some mix of office, retail, housing, and green space. A stadium wasn’t exactly what we’d been envisioning. But as I thought more about it, I realized that the thing that’s been missing from the conversation is something to catalyze change.”

Before he was elected, Stark worked for University United, an economic development coalition along University, so it’s no exaggeration to say that he’s been thinking about this corner for decades. And today he calls the existing strip mall shopping center a “chicken-and-egg” problem. Without nearby investment, existing land uses won’t change anytime soon. But without changing the existing strip mall, nobody is lining up to invest money in the area.

A stadium might change all that, but only if the city makes sure the team embraces the big picture.

“Everyone feels strongly that something should happen on that site,” Stark said. “We’re tired of looking at an empty corner, at what should be a prime location. In the council resolution, we tried to make sure that any deal would include mixed-use activities at that site: jobs, housing, and retail that would really make it a 24-7 vital place in middle of the city.”

If history is any guide, the backers of the stadium deal will try to add parking and road expansions to the project. But for neighborhood advocates, that’s exactly the wrong thing to do.

Roger Meyer is an environmental consultant and long-time member of Neighborhoods First!, a local advocacy group focused on sustainable development. He worries that the stadium will provide an excuse for the city to expand driving in an area already burdened with wide high-speed roads.

“It’s hard to set the financing aside, but I would make sure the development really supports the steps we’ve been planning,” Meyer told me. “We want it to be transit-oriented, to fit with the bikeways plan, to be a community asset. And I really hope [the stadium plan] doesn’t push for bigger freeway connection through the Ayd Mill Corridor.”

Instead, Meyer would like any stadium deal to focus on already existing city goals like living-wage jobs and nonmotorized transportation.

“I hope we don’t give away more than we already have,” Meyer said. “I want to see St. Paul’s vision for that space come true — live/work transit-oriented development that’s a benefit to the neighborhood, not reliant on heavy auto traffic. That’s my biggest overall concern. We shouldn’t let excitement and desire to have the stadium make us forget to consider the important things.”

A chance to build the bike plan?

As it currently sits, University and Snelling is a bear for bicyclists. Getting across Snelling, University, or the I-94 corridor is one of the most dangerous things that a St. Paul bicyclist can do, and the stadium site lies at the corner of all three. It’s one of the key reasons bicycling hasn’t taken off in St. Paul the way it has in neighboring Minneapolis, and it’s one of the things that Mike Sonn, co-chair of the St. Paul Bicycle Coalition, hopes a stadium deal might change. 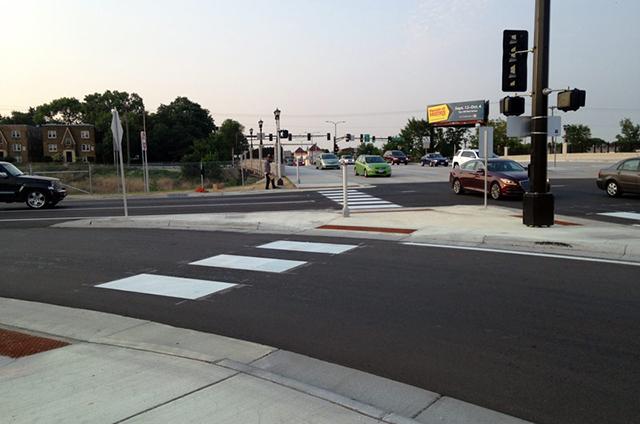 MinnPost photo by Bill Lindeke
University and Snelling is a bear for bicyclists.

“It’s very unpleasant,” Sonn replied, when I asked him about the existing bicycling conditions around Summit and University. “You can go east-west fairly easily, because you have Charles, Marshall, or Summit. But any way to get north and south is nearly impossible in that area.”

St. Paul passed a citywide bike plan earlier this year, but Sonn is worried that the actual implementation of the plan is moving too slowly. Though he’s not a big fan of stadium subsidies, he thinks the stadium might lead to improvements over the status quo, with the team prioritizing bike and pedestrian access along Pascal Street, pushing the city to build bike parking, and closing off streets on game days.

“I’d really like to see the team emphasize to the city the importance of implementing the bike plan, “ Sonn told me. “Not only for access to the games but also based on the fan demographic. The stadium could open up a lot of adjacent area to development if they can get a big mode share for transit, walking, and biking, because then you don’t have to build so much parking.”

Soccer as the most urban sport

Brian Quarstad is another long-time Snelling Avenue advocate, and runs the Facebook group Citizens for a Better Snelling Avenue. As a long-time soccer blogger, you’d think he would have welcomed a soccer stadium proposal with open arms. But like Council President Stark, Quarstad was an initial skeptic.

“Even though I’ve been a supporter writing about soccer for years, I was not a fan of the site from the beginning,” Quarstad told me. “It was kind of against what the neighborhood had all talked about for the TOD plan. But a couple things changed my mind.”

Quarstad cites the $30 million development shortfall, and the lack of momentum on any other development plans with the site as some of the reasons he changed his mind. But his big revelation came when he attended an international soccer match at TCF stadium last August (Manchester City vs. Olympiakos). Riding the Green Line with hundreds of like-minded fans was something he’d never thought he’d experience in his hometown.

“In my city, I got on a rapid-transit rail system to go to an international soccer game,” Quarstad narrated. “Riding the light rail with tons of other fans, all wearing their scarves and jerseys, I got emotional about it. To have that experience going to an international game, with large groups of people that are like you … . Their skin color may be different, their socio-economic class may be different, but it was just wonderful to have that experience. It’s going to be huge to make the stadium transit accessible. You got all these young millennials who appreciate and understand the game. With the BRT and the LRT, I just think it makes for the perfect spot.”

The economics of stadium subsidies are notoriously unrewarding. But, details of taxes and financing aside, whether or not the proposed MLS stadium helps or hurts St. Paul and its Midway neighborhoods remains to be seen. The devil will be in the details, and St. Paul neighbors are hoping for some transparency. A lot of hopes are riding on the outcome.

The devil is in the details when it comes to St. Paul’s soccer stadium hopes