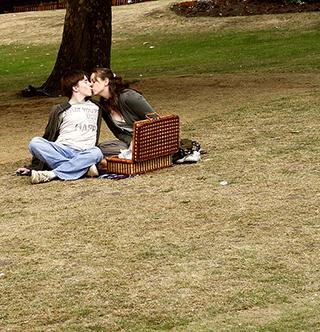 CC/Flickr/Rachel Cowan
Making out can be a tricky business.

In the middle of the third season of “The Wire,” David Simon’s legendary TV series about urban life, police Major Howard “Bunny” Colvin gives a great speech to his assembled officers: a tribute to the brown paper bag. Here’s the (paraphrased) heart of the speech:

The corner is, was, and it always will be the poor man’s lounge. … But the law is a law. If the police arrested every dude they saw tipping back a High Life, they’d have no time for any real police work. Somewhere back in the ‘50s or ‘60s, there was a small moment of genius by somebody. On his way to the corner, he slips that just-bought pint of elderberry into a paper bag. It was a great moment of civic compromise. That small wrinkled paper bag allowed the corner boys to have their drink in peace, and it gave [police] permission to go out and do police work — the kind of police work that, actually, is worth taking a bullet for.

Just as the brown bag represents a “civic compromise” for a fictional Baltimore drunk, making out can be a tricky business. While thankfully not illegal, making out in a city park demands a level of discretion that’s not always easy for the inexperienced. Here are some dos and don’ts, and why it matters.

Is making out illegal?

While Minnesota has a national reputation for moral prudery, all the young lovers out there can rest assured that it’s perfectly legal to make out in a city park. I reached out to park officials in a few of the area’s cities and counties, and clarified the issue.

“We don’t have any special ‘making out’ restrictions in our parks and haven’t had any major issues,” Brad Meyer, the public service manager for the St. Paul Parks Department, told me. “Public affection is allowed in parks, provided that it doesn’t go beyond ‘making out,’ which then we have the normal laws that protect against public indecency. The police are responsible for enforcing indecent exposure and lewd conduct laws in our parks.”

While kissing is technically kosher, there are plenty of other ways that park police and other assorted authorities seek to limit the most egregious displays of nonverbal conversation.

For example, Dakota County, where making-out allegations recently made national news, has a set of park ordinances that include regulations [PDF]. Here’s what they say about indecent exposure:

“It shall be unlawful for any person to intentionally expose his or her own genitals, pubic area, buttocks, or female breast below the top of the areola, with less than a fully opaque covering while in a County Park, if 5 years of age or older.“

Of particular relevance to recent events are the county’s “nuisance” ordinances, which closely mirror those in other parks. (Section D. includes two rules: It shall be unlawful to commit any act that constitutes a nuisance” … “or to place or park vehicles … in a manner or location that interferes with traffic.”) Similar issues abound around things like loitering laws, park hours and curfews. (Pro tip: When “parking” your car to make out, it’s best to do so in a lawful parking spot.)

The lesson here is that nuisance is in the eye of the beholder, and an officer who wants to ticket or discourage anyone’s behavior has a lot of leeway.

For a parks department, the two great risks of kissing tolerance is that it so often comes with booze, nudity, or both. Nearly every American “coming of age” film made in the last 50 years revolves around these pillars of teenage society, as does the eternal dance of park police and kids today.

For example, Dana, who grew up in Burnsville, recalls her high school days playing cat and mouse with the police.

“My high school boyfriend and I didn’t drink,” Dana told me. “We would often serve as sober decoys at keggers and the like along the river bottoms or the Lilydale caves. The cops would come, [and] everyone but us would scatter. We’d start making out and play dumb to the police.”

Things might be slowly changing for some Twin Cities parks as Minnesota slowly grows more tolerant of alcohol. (See also, Sunday sales, the Surly bill, Como Dockside, Tin Fish, etc.) Both Minneapolis and St. Paul technically allow 3.2 beer in some parks during some hours. But in my experience, partly thanks to the “paper bag principle,” those rules are rarely enforced as long as people obey the other written and unwritten codes of public conduct.

Even on the nudity front, things are starting to change. Earlier this year I was at a county park in St. Cloud, and (lacking a swimsuit) one of my friends took her top off to jump into the lake. We were spotted by a neighbor, who called the Stearns County sheriff, and within a half hour our group was ejected. But not before having an in depth (and awkward) conversation with the deputy about the unequal expectations surrounding the public display of men’s and women’s bodies.

It might seem like a fringe issue, but last month’s topless demonstration in Minneapolis’ Gold Medal Park placed the public nudity question at the fore. And New York City’s recent debates over technically legal topless entertainers in the pedestrianized Times Square point to lingering tensions around morality and public space.

What makes a good make-out spot

Each year my fellow Minnpost columnist Andy Sturdevant co-hosts a series of August urban “common room” tours from the Soap Factory art gallery. Last year, the “make out” tour was one of the most popular, and Sturdevant and his co-host, Sergio Vucci, gathered stories about the best make-out spots in the city.

According to his crowdsourced research, Minneapolis and St. Paul’s two best make-out parks are Minnehaha Falls Regional Park and Linwood Park, respectively. And you think about it, those two parks make a lot of sense. (I would personally add St. Paul’s Cherokee Regional Park to the list, which offers an amazing vista near where I live.) 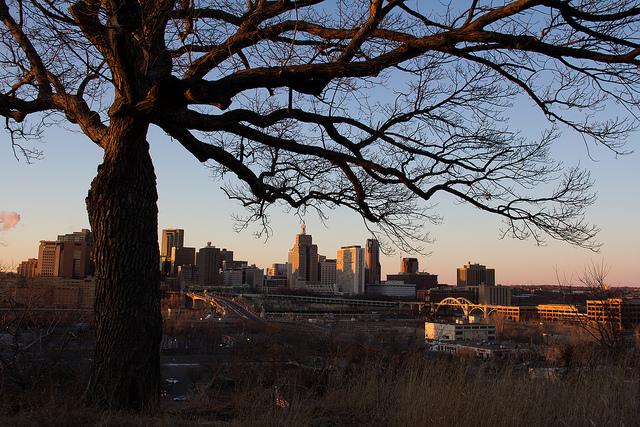 CC/Flickr/Paul Weimer
A good view is a crucial component of any good make-out spot.

A good view is a crucial component of any good make-out spot. It gives the couple something to look at, a shared perspective and a slight sense of the sublime. (Think of the Hollywood cliché of teenage couples “parking” on the hills overlooking Los Angeles, the lights of the city spread out below them.)

On the other hand, there’s a special transgressive feeling one gets making out in a well-trafficked city park. In his film, “The Social Life of Small Urban Spaces,” the famous urban sociologist William Whyte observes smooching patterns on the edge of a fountain plaza in 1980s Manhattan. Here’s how he describes the relationship between romance and display:

If you want to see the lovers, people told us, look in the back. We did, and they weren’t there. Most of the lovers that we spotted at Seagrams [Plaza] were usually to be found in the middle of the pool ledge, the most conspicuous of spots.

I remember once “making out” in Union Square Park in New York City, the relative darkness of the park surrounded by the brightly lit buildings. There was a charge of excitement that came along with knowing that you were on display. 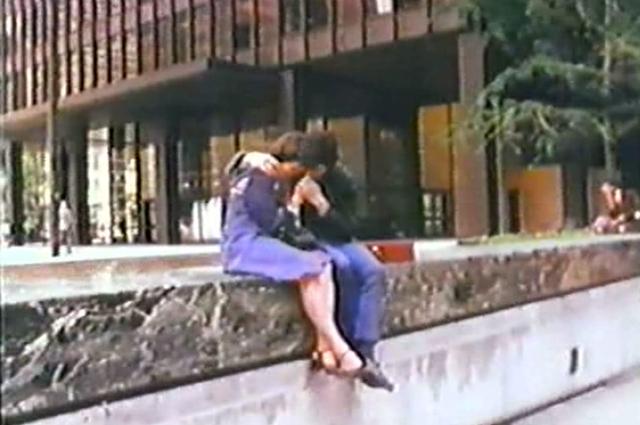 In his film, “The Social Life of Small Urban Spaces,” the famous urban sociologist William Whyte observes smooching patterns on the edge of a fountain plaza in 1980s Manhattan.

Public space is always a negotiation

As I’ve mentioned before in Cityscape, the written and unwritten rules of public space are always under pressure. Just what constitutes a nuisance (skateboarding, for example) can vary greatly depending on who’s talking and where they’re located. Making out is a great test case of this kind of delicate balance.

“I got busted for pretty much the identical thing as those legislators (as far as I can tell) at Lake Calhoun almost 20 years ago,” my friend Ahndi told me. “The cops were very kind and told us to move along (and some other things). We’ve been married 18 years and that story still makes us laugh.”

For many people making out in city parks is a rite of passage. The vast majority of the time, confrontations with park police don’t escalate to the point of giving nuisance tickets. You don’t have to put a paper bag over your head, but a lot depends on where you are, and how conspicuous you choose to be. Next time you feel like making out in a city park, try to keep that in mind.

The unwritten rules of making out in parks