The turning radius: a seemingly obscure street design detail that governs a lot about our cities.

Basically, the turning radius measures the angle of the curve at a street corner. Turning radii (that’s the plural, of course) are such mundane parts of the built environment that they become almost invisible to 99 percent of people using the street.

As it turns out, radii can be a hot-button topic for city engineers because these subtle specifications have a tremendous control over vehicle speeds, pedestrian safety and how trucks navigate our cities. Some recent changes in Minneapolis and St. Paul point to the unsettled debate over turning radii, and how to make streets safer in a world of unruly drivers.

Technically known as the “minimum centerline turning radius,” the best definition for the turning radius is a circular arc formed by the turning path of the front outside tire of a vehicle. For drivers, it controls the vehicle speed. (You have to drive more slowly around tight corners with smaller radii.) In addition, the turning radius can depend on the size of the vehicle; trucks, for example, have different paths for front and back wheels.

“There are recommended minimums in the design standards,” K.C. Atkins told me. “However, determining radii is really on a case-by-case basis, depending on where you are on the roadway.”

Atkins is a Minneapolis-based transportation engineer at Toole Design Group, a national consulting firm, and turning radius is a big part of her life. She’s currently working on preliminary designs for St. Paul’s downtown bicycle network, where intersection design will play a big role.

Rethinking radii is important because for much of the 20th century the trend in U.S. cities was to increase the turning radii at intersections to try to accommodate higher speeds. These days, however, there’s a change in direction as more cities are trying to improve walkability. Like many street design variables, there’s an unavoidable trade-off between pedestrian safety and traffic speeds, and the turning radius forms the balance point between these priorities.

What is the design vehicle?

For many busier streets, one key variable guiding engineers is the so-called “design vehicle.” Are you designing an intersection around personal cars, buses, or semi-trucks? How you answer that question makes a big difference. 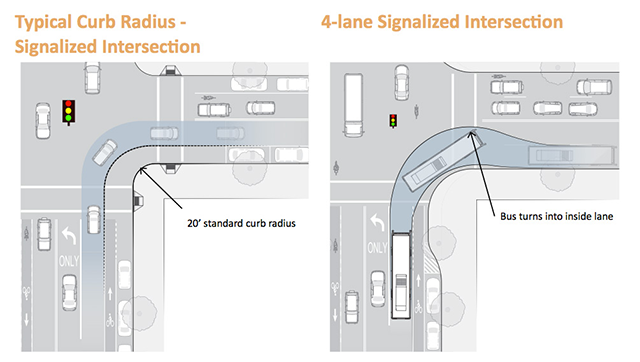 “We’re definitely learning a lot more in urban areas about tightening up the turning radii,” Atkins told me. “Before, we used much gentler radii around corners. Agencies looking at what design vehicles they’re designing for have a trend in urban areas of designing for smaller truck types. In many locations, you don’t need quite as large radii as you needed in the past.”

St. Paul’s soon-to-be-adopted new street design manual has a whole section on reducing turning radii. But they take care to mention the importance of emergency vehicles or trucks, which find tight turning radii difficult to negotiate. The St. Paul manual has this to say:

Because emergency vehicles have sirens and flashing lights and other vehicles must pull over, they can typically use the full right-of-way without encountering opposing vehicles. On busier streets, the ability of emergency vehicles to swing wide may be limited by queued traffic that may not be able to pull over.

Another factor for trucks is that they can often be more flexible about how they use an intersection. For example, according to KC Atkins, it’s technically legal at tight corners for trucks to use “both” lanes while turning.

“Say there are two one-way roads,” Atkins told me. “It’s possible a truck could use parts of both lanes to make that turn. Or if there are two lanes on the side they’re turning into, they could possibly turn into the left lane.”

One persistent problem for engineers: Even if they try to improve safety through decreasing turning radii, some drivers will simply begin crashing into the pavement or streetscape.

“The dangerous factor for turning radius is unruly drivers,” Atkins explained to me. “If cars try to take tight corners too quickly, they often end up driving over the curb or damaging the lighting, pedestrian push button, or anything you have on that corner. From a maintenance perspective, trucks riding up over the curb tend to chip away at that. … they want to make sure they’re not running over it.”

In other words, there’s literally an everyday war of attrition going on between sidewalks and cars. And because replacing infrastructure can be quite expensive, much of the time the sidewalks seem to be losing.

The case of the Minneapolis medians

The question of turning radius came to the fore in South Minneapolis last week when Christopher Meyer, a local urbanist, noticed a Facebook photo of a Public Works employee slicing up newly installed pedestrian medians in his neighborhood, at the corner of Park Avenue and 28th Street. Meyer ended up calling his City Council member and quickly headed to the location to stop the employee from cutting up the pavement.

“It didn’t actually get all that dramatic,” Meyer told me. “The truck drove off while I was standing there, before I was able to confront them about it. I watched them make preparations to saw around the median at Park and 28th, after they had just finished sawing Portland & 28.” 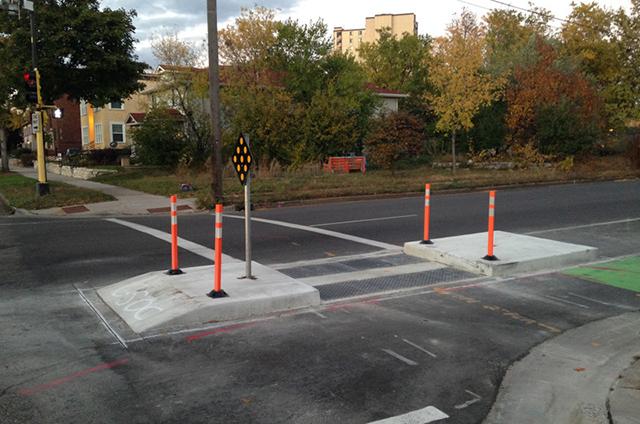 MinnPost photo by Bill Lindeke
One of the controversial pedestrian medians in South Minneapolis, slated to be removed because of turning radius concerns.

The medians are part of the city’s newest protected bike lanes, and sit on the intersections of 26th and 28th Streets and Park and Portland Avenues, all of which have traditionally been high-speed one-way streets dangerous for bicyclists and pedestrians.

So what’s going on with the disappearing medians?

“When 26th and 28th were resurfaced earlier this year, we put in a new protected bikeway with pedestrian refuge medians,” Heidi Hamilton told me. Hamilton is the deputy director for Minneapolis’ Public Works department, and doesn’t think the existing design is working.

“Our concerns are about turning radius,” Hamilton told me. “The medians themselves have real corners on edges, and we’ve had some vehicles running over those medians. On the cross streets, some of the drivers are confused about whether they should be turning into the bike lane, and there are some concerns about the visibility of the medians.”

Earlier this year, Minneapolis passed an ambitious plan to build more than 30 miles of protected bikeways. Streets like 26th and 28th, with plenty of excess capacity most hours of the day, are ideal candidates for this kind of bike infrastructure. However, mixing more people on foot and on bicycles with speeding traffic can be a recipe for disaster, and the city made sure that traffic calming was a big part of the picture. These medians, installed earlier this year, were meant to provide needed protection.

“There are always tradeoffs with design,” Hamilton said. “For turning radius, does it slow down traffic as much if you set the median back from the cross street? Does it now make pedestrians invisible? There are a variety of factors that need to be taken into account.”

The city remains firmly committed to removing the medians before winter takes hold, but a City Council member, Lisa Bender, is asking that a replacement plan be in place before any changes are made.

Intersection design — or how the turning radius is shaping your life