For years, this handmade, unofficial path has offered a unique experience to hundreds of bikers and hikers in the Twin Cities. Next year, despite some outcry from the bicycling community, lawmakers and state officials are planning to build a paved path along the route, connecting the Minnesota River Valley into the regional bike trail system. It will mean the loss of today’s pristine experience, but open the space up to many more people.

The symbiotic beauty of mountain biking

I’m not really a mountain biker, but this year I’ve tried it a few times. Compared to bicycling on roads, there’s a special relationship that emerges between you and the path where you’re intimately engaged with the land. As the trail twists and turns, mountain bikers must pay close attention to the constantly changing path. The effect is what the fans call “flow” (kind of like hockey hair), and it can be deeply meditative as you lose yourself in the environment. And along the Minnesota River Bottoms, the path flows through the elms and cottonwoods for long miles, wending from the river to the valley’s patches of grassland, the occasional fallen tree offering an optional obstacle.

“It has a feeling like you’re a million miles from anywhere,” Dennis Porter, who has been riding the river bottoms for years, told me. “You’re in a major metro area, yet you feel like you could be in the middle of the forest hundreds of miles away. Because of its flat terrain, it allows many riders of various abilities to ride the trail. I’ve seen people down there with road bikes and hybrids.”

(For the record, I rode the trail on my Surly Long Haul Trucker, a normal enough stocky road bike, designed for touring.)

Probably the most unique spot in the River Bottoms is the junction with “9 mile creek,” which runs a few feet deep at the trail’s midpoint. There’s no bridge at the creek, so just like the wagons of Oregon Trail, bikers are faced two choices: cross the stream using an awkward handmade raft, or traverse the tree bridge. The raft is a lot of fun, but the tree bridge is beautiful, and offers the kind of organic balance between nature and culture that rarely exists outside the world of fantasy elves.

(For the record, I used the raft.) 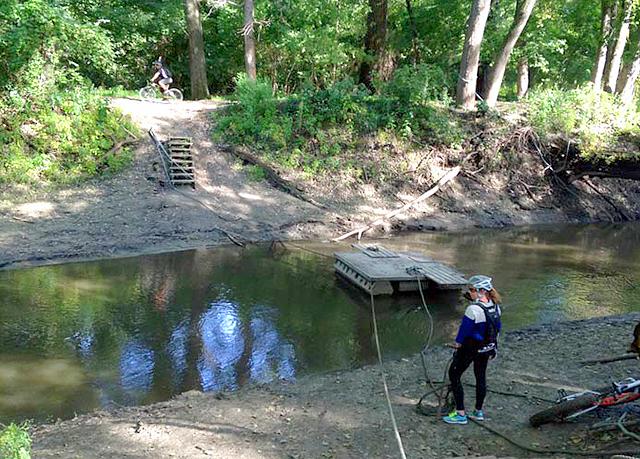 MinnPost photo by Bill Lindeke
The awkward handmade raft at the the junction with “9 mile creek.”

The bridge crossings are great examples of the “DIY ethos” of the mountain bicycling community. Much like skateboarders crafting spaces for themselves at the urban margins, mountain bikers volunteer countless hours building and maintaining trails in underused land. The river bottoms trail is designed and maintained by mountain biking groups like Minnesota Off-Road Cyclists (MORC).

“It’s been a volunteer network for over 20 years,” Porter told me. “People come out of the blue and offer to help. We’ve gone down there with mowers and things like that, and a few other trail elves helped clear trees to try to improve sightlines. It’s all volunteer.”

Despite the off-road tranquillity, the river bottom path has long been vulnerable to the march of progress. Because accessing today’s dirt trail requires some adventurous clambering, state and local planners envision an easier-to-access paved trail along the riverbank connecting the Minnesota Valley National Wildlife Refuge (just East of the Mall of America) all the way to the downstream towns of La Sueur and Belle Plaine. And finally, thanks to a $2.2 million appropriation by the Legislature a few years ago, a paved trail is finally going to be built next year along the riverbank that would tie the River Bottoms into the regional network.

“This is going to hook up to Minneapolis and St. Paul,” Ann Lenczewski, who sponsored the bill in the Minnesota House, excitedly told me. “The whole intercity trail line coming out of the lakes in south Minneapolis will hook up to this; it’ll hook up to the Minnesota Wildlife Refuge Center. You’ll be able to get across to Fort Snelling and cross two counties and the new Cedar Avenue Bridge.”

The trail fits neatly into city and state plans to improve access to the river valley, particularly around the underdeveloped area at the end of the Blue Line, where the Wildlife Refuge is located. It’s part of a larger plan by the city to connect better to the river valley. 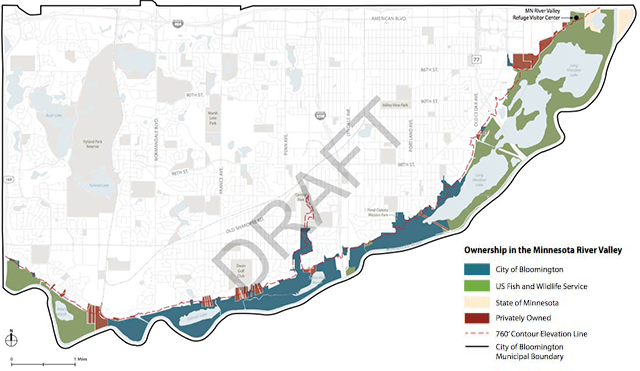 “The majority of people in the suburbs are not so young any more,” Lenczewski told me. “[For] Bloomington’s residents, the largest population growth are seniors. They like a paved situation for walking, strollers, and also for most bikers.”

Because it offered commuting options, connects existing trails, and provides access, the planned trail connection ranks very high in the DNR’s list of projects, almost a holy grail of bike planning. But the plan has upset some of the existing bike trail users, Dennis Porter among them. Porter and others have started a petition to stop the paved trail that has gathered over 3,000 signatures from people who are currently using the path. Porter is convinced that the proposal will ruin the appeal of the existing experience.

“This area in particular has become so popular because it’s natural,” Porter told me. “I’ve been fighting this trail for 25 years. People I talk to when I go down there say, ‘Why would they do that? This is s such a wonderful place.’”

Porter’s case against the DNR’s plan boils down to two things: cost and maintenance. Porter points to an existing $10 million DNR maintenance deficit, and the high expense of similar trails. He and other mountain bikers would rather see a “natural” trail design, with a few improvements but remaining centered on a meandering dirt path.

There’s always a tension surrounding the best uses for parkland, and balancing between a narrow slice of dedicated users and a broad range of future users is something that planners try to do carefully.

“We want to enhance awareness and access to the Minnesota River Valley while providing environmental protection,” Brett Feldman, the executive director of the Parks and Trails council of Minnesota, told me. “We really want to get people down there. It’s not drawing the [right] numbers of people to appreciate the area. The mountain bike trail is not an authorized trail right now. Some fear it will be removed, [so] right now is an opportunity to protect that trail in perpetuity while getting more access for more people.”

Photo by Griff Wigley
The tree bridge at the the junction with “9 mile creek.”

While the existing trail might be unique, offering a natural adventure to hundreds of people, for many people like Feldman and Lenczewski, the potential lure of thousands of people using a paved trail outweighs those impacts.

Porter is going to keep fighting the proposal, and holds out hope that budget constraints might stop the project.

“It’s a special place very unlike anything in the Twin Cities,” Porter told me.  “This place actually grew pretty much organically on its own.”

If you want to see this unique bike trail before it changes, you’d better get down there. I’m glad I finally got the chance. The ribbon cutting for the new path is slated for next spring.