“The soul of a city lies in its history, and this piece of neon memorabilia we’re going to light tonight helps bring back a part of that history.”

Those were the words of then-Minneapolis Mayor Don Fraser right before he threw the switch that lit the iconic Grain Belt Beer sign on Nicollet Island in 1989.

The late ’80s rehab of the Grain Belt sign was years in the making, an expensive process involving over a thousand incandescent bulbs, 800 feet of neon tubes, and the eviction of dozens of squirrel and bird nests that had found their way into the massive 1940s-era sign. When it lit up, the delighted Minneapolis crowd cheered and chanted as the letters lit up. At long last, the blinking colors were resurrected, triggering memories for anyone old enough to kindle neon nostalgia.

It didn’t last long. Maintaining a historic neon sign is difficult and expensive, and after a few years of brewery bankruptcies and funding shortfall, the Grain Belt sign went dark. But elsewhere, historic signs are experiencing a rebirth atop historic buildings, offering hope for those who appreciate the lost art of outdoor advertising.

One of my favorite historic anecdotes about Minneapolis is that, back in the 1940s, there was a giant sign atop the Washburn-Crosby flour mills that said “Eventually.” The odd word was a nod to the fatalistic marketing slogan for General Mills’ Gold Medal Flour: “Eventually you’ll try Gold Medal Flour, why not now?”

(I rather like “eventually,” it as a refreshingly honest motto for Minneapolis. As in, “Eventually, we’ll get around to being a truly great place!” or something like that.) 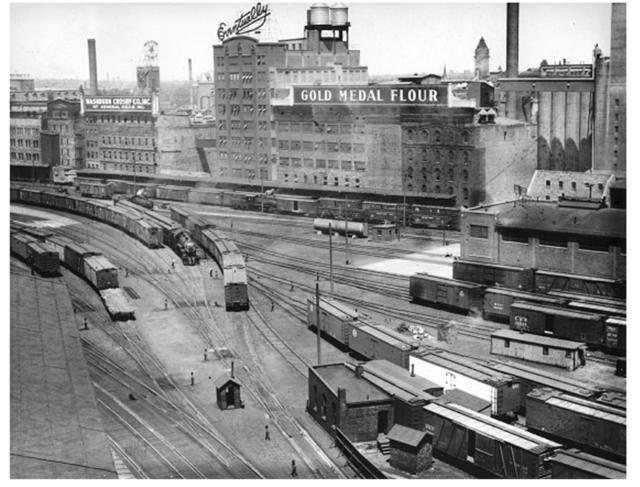 Courtesy of the Minnesota Historical Society
Back in the 1940s, there was a giant sign atop the Washburn-Crosby flour mills that said “Eventually.”

Diving into the history of urban signage offers a lesson in the evolution of advertising. A century ago, the streets of Minneapolis were overflowing with messages aimed at plodding pedestrians. “Signpainter” was a legitimate profession, and the crowded building facades meant that storefronts and shop windows competed fiercely for attention.

Some of our oldest extant signs date back to this pre-neon era; the Gold Medal Flour sign that is today part of the Mill City Museum was originally incandescent, and dates to 1910.

When neon came along a few decades later, it was a revolution. The colorful flexible tubing allowed for a new kind of nighttime display, and — particularly following World War II — both cities began lighting up rooftops and main streets. Many of the city’s most famous signs date to this era — the Pillsbury and Gold Medal signs in Minneapolis, and the Schmidt and 1st National Bank signs in St. Paul. Hennepin Avenue became a neon vanishing point as theaters and advertisers lit up the night. 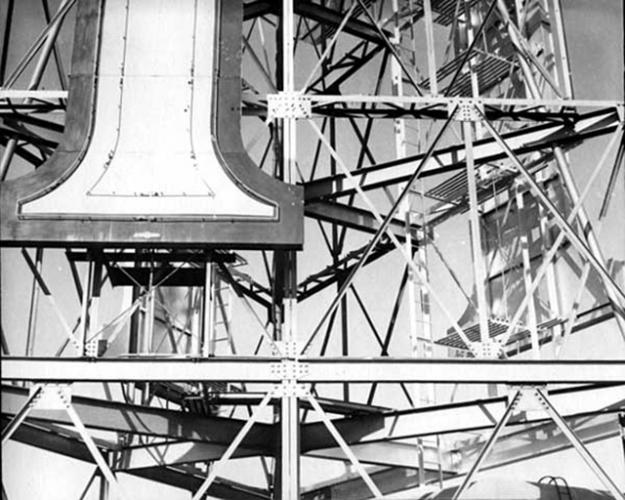 But the last few years have seen a few landmark signs return, as shifting technology has made it possible to bring back some of the icons of yesteryear.

“I’m encouraged by the Pillsbury sign relighting,” Erin Hanafin Berg told me. Hanafin Berg works for the Preservation Alliance of Minnesota, a statewide group that has become increasingly interested in historic signs as a way of connecting with larger populations of urban observation buffs. The Pillsbury sign was re-lit just last month, as part of a new apartment development.

“It’s an all LED system now,” Hanafin Berg explained. “Actually, it wasn’t even ‘relighted,’ it was recreated, replicated, and relit with LEDs. Having that approved by the city is a great precedent to allow the Grain Belt sign to be restored because using LED is a much more stable system for the long term.”

Hanafin Berg told me about the preservation community’s initial reservations about changing historic neon signage to the new technology. When the proposal was floated to relight the Pillsbury Flour sign atop the old A-Mill, firmly within the St. Anthony Falls Historic District, the commission chartered a test: an apostrophe with the old neon and an apostrophe with the new LED technology. Though differences in the quality of the light remained noticeable, the commission approved the new sign. And this month, the old Pillsbury sign was again throwing red (historically tweaked) shadows over the Mississippi waterfall below.

LED signage offers a potential lifeline to people interested in recreating the historic advertising landscape of the city. While a neon sign can last 50 years under ideal conditions, because it’s a gas that lights up when it’s electrified it can leak out or corrode and eventually wears out. LEDs are more flexible and replaceable.

Neon can be particularly problematic when it’s closer to the ground, and susceptible to vandalism. As any old-school West 7th Street denizen will tell you, specific letters in St. Paul’s famous S-C-H-M-I-D-T brewery sign would periodically fall victim to rifle fire, leaving a scatological icon over the city. 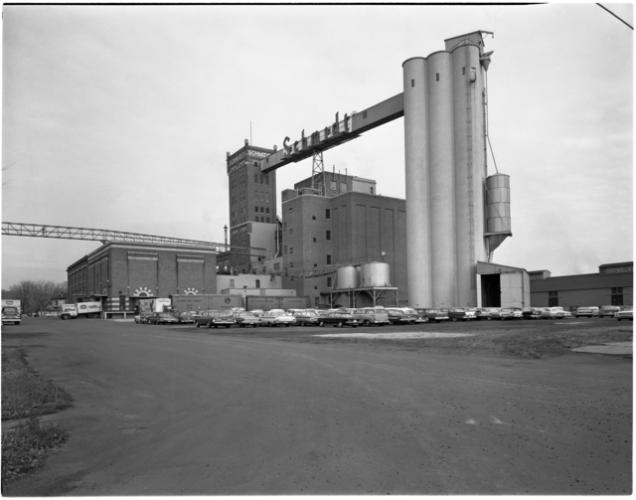 “Like any big undertaking, it’s kind of challenging,” Hanafin Berg said. “The interesting thing about the two recent signs is that Schmidt and Pillsbury were both Dominium  projects [a developer of historic property]. They realized both signs would be a good gesture for their development, so that’s interesting that they’re recognizing how much something like a historic sign means to a the broader community. Bringing those back can really foster goodwill and appreciation for development as a whole.”

You’ve probably seen the famous Grain Belt sign out of the corner of your eye as you cross the Hennepin Avenue Bridge. It sits on a tiny parcel of land on the corner of Nicollet Island, smack in the middle of the Mississippi River.

(To me, as a former Massachusetts resident, it’s always reminded me of the iconic Citgo sign in Boston by the Charles River, another formerly-neon LED restoration job.)

In its heyday, the Grain Belt sign was a magnificent specimen: green, red, orange neon plus a blinking Grain Belt beer lettering atop a the brand’s bottle cap logo and black diamond.

Fun fact: The 1941 sign was originally located above a nightclub on Nicollet Avenue, roughly where the massive Hyatt hotel is today. It was moved to its home on Nicollet Island in 1950, where it became a focal point for the city’s famous Hennepin Avenue axial vista. 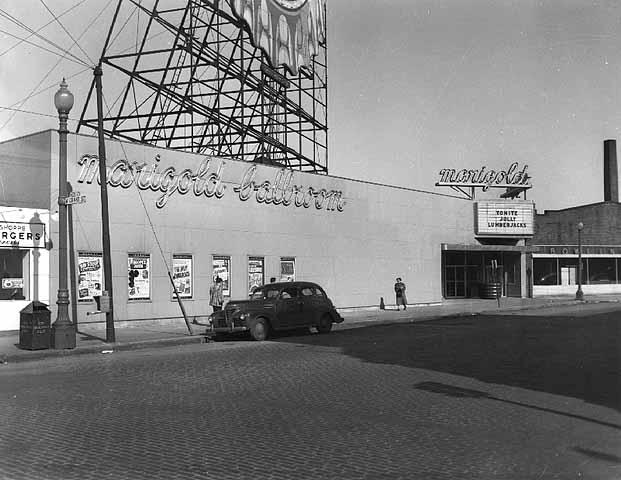 Courtesy of the Minnesota Historical Society
The Grain Belt sign was originally located above a nightclub on Nicollet Avenue.

“Back then, they called Hennepin Avenue ‘Grain Belt alley’ for good reason,” Victor Grambsch told me. “Back then there were no skyways, and you could see the Grain Belt sign from the Basilica. The new suspension bridge completely blocks the sign, and it’s lost the historic context of the way it looked in the city.”

Grambsch is the president of the Nicollet Island – East Bank Neighborhood Association, which would love to see the sign rehabbed as long as it didn’t come with too many strings attached.

Today, the main sticking point is the property itself. The sign is technically leasing space from a Texas property owner. Meanwhile, the sign’s owner would love to sell it, but until the details are worked out, it’s hard to see any rehab or restoration progress happening.

For his part, Grambsch would rather move the sign to another location along the river, somewhere where it could have a greater impact on the city. Meanwhile, the Preservation Alliance is still brainstorming ways to get around the ownership and financing difficulties.

Old advertising is a funny thing. Old ads are often selling brands that don’t exist any more — like the “North Star Blankets” or “Cerasota mills” signs in Minneapolis’s mill district. Without a brand or willing developer to foot the bill, who’s going to pay to promote a product that doesn’t exist?

“When the things they’re advertising are no longer in business, nobody has a commercial interest in supporting or maintaining them as advertisements,” Hanafin Berg told me. “It becomes part of vestige of a foregone past. It’s commercial history, but not going to help generate ad revenue for what they’re advertising.”

That would seem to leave little hope for my pipe dream: the return of Minneapolis’ sweeping “Eventually” motto. I suppose that most everyone’s tried Gold Medal Flour by now, and maybe some slogans are better off left in the dustbin of history.

At the same time, ads can be a secret passageway into long lost memories. When the big blinking SCHMIDT brewery sign was relit last year, I was arrested. I stood on the bluff near my house gazing over the Mississippi, watching the slow pattern of the lighting letters, S- C- H-… and so on, followed by three flashes of the entire word SCHMIDT.

There was something about the rhythm of illumination that mesmerized me and brought me straight back to my childhood the 1990s, looking out the back window of my parents’ car as I was shuttled around the sleepy city. Today, with the light returned, St. Paul means a little more to me than it did last year.

Signs of the time: Why we spend big bucks to save old ads