“The Process is Broken” scream the bright green fliers, referring to a St. Paul proposal to install parking meters. Meanwhile at a press conference last week, a group of long-time activists released a statement castigating the lack of transparency and accountability in the city. The group, called Saint Paul Strong, released a laundry list of problems that they connect to St. Paul government: for example, plans for bike lanes, a lawsuit over a park café, and most recently, the secretive negotiations around a proposed soccer stadium in the Midway area.

But the idea of public process is not straightforward, and means different things to different people. With everything from elected officials to public bodies to neighborhood groups to public meetings operating simultaneously, it’s difficult to know how to get involved and whether it will make a difference.

A brief history of public engagement 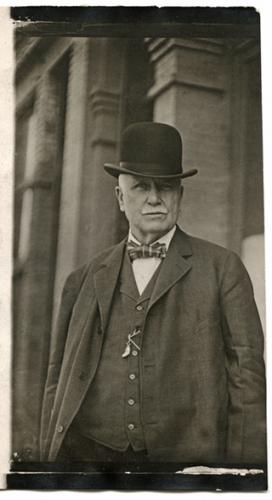 In the early 20th century, most large cities operated as so-called “political machines.” Cities like New York, Chicago or St. Paul operated hierarchically, with each “ward boss” (or council member or alderman) taking responsibility for his neighborhood. Patronage trickled down in the same fashion as votes and money tricked up, and if you wanted to get anything done in your neighborhood, you had to go through the machine’s channels and complex system of favors.

In some ways, the patronage-machine city worked well. If you knew the right people, you might accomplish a great deal in a short amount of time. On the other hand, if you didn’t, you were screwed.

The next big change in how cities work came with the rise of the independent municipal bureaucracy. It is chronicled in Robert Caro’s wonderful biography of Robert Moses, the New York City Port Authority boss who built an unprecedented number of parks and freeways during his 40-year reign, bulldozing vast urban neighborhoods in the process. For Moses, public engagement was irrelevant and unnecessary. If you wanted something done, you bulldozed first and asked questions later.

By the late 1960s and early ’70s, as cities began to deeply struggle with suburbanization and economic decline, things changed fast. Most official “city planning” departments and “planning commissions” date back to this era. Faced with a restive public, city leaders began to take the need for “public process” more seriously.

For example, in a famous 1969 article that has become mandatory planning and policy school reading, a sociologist named Sherry Arnstein began to describe different types of public engagement as a “ladder of participation” that ranged from the lower rungs of “tokenism” (including “placation”) to the more empowering rungs (“delegated power” or “partnership”). 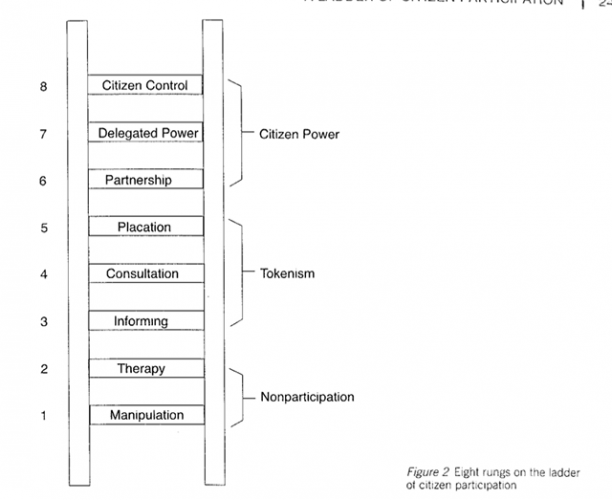 The ​Arnstein ladder of participation is from a 1969 article.

Today, cities like Minneapolis and St. Paul display unique mixes of these different types of urban processes. In Minneapolis, the dispersed City Council committee structure means that most policy changes receive multiple public airings. In St. Paul, the technically part-time City Council often relies on a consent agenda to approve policies, and it can be much more difficult to know what’s going on behind the scenes.

On the other hand, Minneapolis’ rather chaotic system of 70+ neighborhood groups faces challenges around the issues of transparency and inclusion, while St. Paul’s system of 13 district councils is more simplified, with larger constituencies.

(Two more examples. In a pair of Cityscape columns earlier this year, I compared and contrasted the two cities’ “public processes” for capital improvement decisions. And comparing the two cities’ Planning Commissions, St. Paul’s 20-person group and sub-committee structure, where I am a member, offers more chances for engagement compared to Minneapolis’ smaller 10-person body, or so I have been told.)

Ideas about outreach and process have been changing recently with criticism about how traditional public processes — think of neighborhood groups, commissions, or town-hall-style public meetings — end up excluding specific types of people.  (As MinnPost pointed out a few years ago, Minneapolis has trouble with representative public commissions. St. Paul has exactly the same problems; I’m the only renter on the Planning Commission, for example.)

In response to these kinds of criticisms, many cities have been trying to figure out new ways of doing public process through specific “trusted advocates” or “design charettes” intended to connect to new audiences in new ways.

“Pop-up meetings came out of me trying to think about if I could even go to a public meeting in my personal life,” Amanda Lovelee told me this week. Lovelee is an official City Artist for St. Paul, part of a program funded by Public Art Saint Paul.

“If there was a meeting, if it was at 6 o’clock, then would I have child care, and would I get home in time to be there?” Lovelee said. “How difficult would that be if English wasn’t your first language? Or if you had two parents working changing shifts, or if you didn’t have a car, or if the meeting wasn’t on a bus route?”

In response, Lovelee has built a model for a mobile “pop-up” public meeting that can travel around the city. For a few hours, depending on the day, people can give planning feedback in exchange for a popsicle.

For Lovelee, these meetings are a way of moving past the traditional “genre” of public participants to reach new groups of people to gather input about projects like redevelopment of the former Ford Site, the downtown riverfront, or how to design bike lanes. 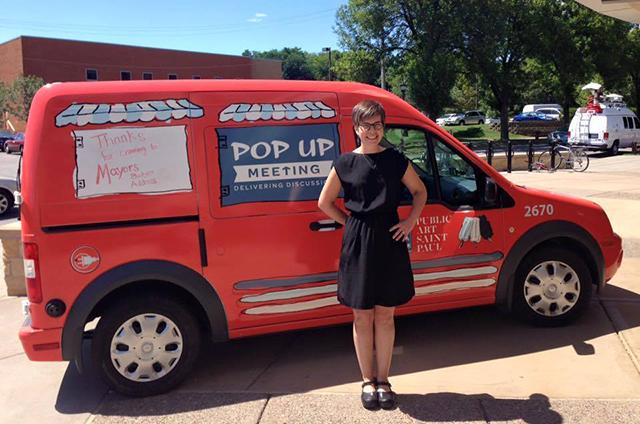 Public Art Saint Paul
Amanda Lovelee has built a model for a mobile “pop-up” public meeting that can travel around the city.

“[For the Ford Site planning,] we went to a low-income housing/senior housing unit and worked with the people there,” Lovelee told me. “It’s important to be really site specific as well. With the bike planning, we went to very specific intersections and got very specific feedback on crossing specific streets. Or, with help from the mayor’s office, went to the Dragon Boat Festival or Rondo Days Parade, where we knew people would be massed there.”

Getting a lot of survey information might seem nice, but the key question is what becomes of the feedback. Does it amount to “tokenism” or what Arnstein calls “citizen power”? Does it make any difference for decisionmakers downtown?

“This wasn’t just me doing this project as an outside consultant,” Lovelee explained. “I’m embedded in the [planning process], and [if I was] working on a specific project, that planner would go with me. [Afterward] we took all the surveys and brought them back. And I know [the Ford site planners] are using some of that feedback. It brings other voices into the planning process, and I hope over this winter to work with specific planners and architects to figure out how helpful that feedback was, and how can we do it even better.”

The challenge of long-term co-creation

Lars Christiansen is sociology professor at Augsburg College who has been trying to rethink how public processes work. His most recent paper is based on his work with the Saint Paul Friendly Streets Initiative, which organized the public process for the Charles Avenue bicycle boulevard in his Hamline-Midway neighborhood, and traces how different models of public engagement can alienate or empower communities. 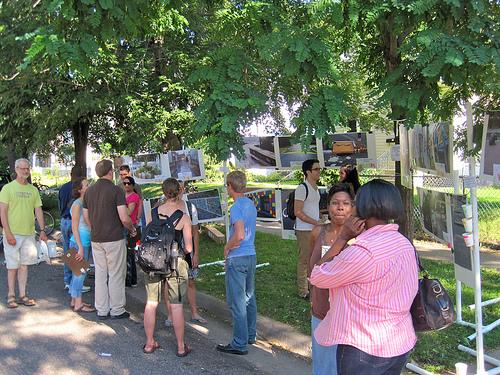 “Much public engagement these days is what I call ‘quick touch,’ ” Christiansen told me. “You’ve usually got a firm that is hired by an engineering or design agency, usually external to the community, and they spend a week here and there, that kind of thing. The community organizing approach to public engagement [that I prefer] takes a lot longer. Like any other community organizing, it involves trust building, relationship building, and lengthy listening. It’s really aiming for co-creation.”

Courtesy of Lars Christiansen
Particularly important, according to Christiansen, is to make sure that public engagement happens early in the planning process.

Particularly important, according to Christiansen, is to make sure that public engagement happens early in the planning process. As the public process moves forward, from “visioning” to action,” opposition solidifies, while early involvement that doubles as community organizing can help overcome stasis. For example, Christiansen worries that the city’s plans for bike lanes on Hamline Avenue, scheduled for next year, may not leave enough time to reach out to a diverse group of people in the neighborhood.

“All Friendly Streets projects are at least a year long; it can’t be done in a month,” Christiansen explained. “The holy grail is the notion of inclusion. How do you do it for the whole duration of the project? How do you keep folks who might have become excited about the visioning process early on, when things were speculative, how do you sustain that through a formal process? We don’t really have the answer to that quite yet.”

When should leaders make unpopular decisions?

Twice in the last two years, Saint Paul’s Riverfront Corporation has invited famed Colombian planner Gil Peñalosa to speak to civic leaders on the topic of how to build “8-80 Cities,” streets that are safe for people of all ages. The mayor’s office became so enamored of the concept that they earmarked millions of bonding dollars for a wide set of projects that support those walkability principles.

But during his placemaking residency last year, Peñalosa had curious things to say about the need for consensus in creating urban change:

“Change is difficult of course, and it doesn’t happen by consensus. You have to listen to everybody, but at the end of the day what matters is the general interest. Change will never happen by consensus. If you want change, to be unanimous you have to water down change so much that it’s not going to be change any longer. So listen honestly and make a decision,” Peñalosa told the assembled crowd.

Peñalosa’s quote points to the scalar tensions that surround engagement, where big-picture needs are often pitted against the interests of a specific constituency.

It’s a recurring problem. When I asked her about plans for Grand Avenue parking meters in a recent column, Public Works Director (and former council member) Kathy Lantry made similar comments about a previous 2-year study where “no consensus was reached.”

“My job is to make recommendations to the mayor about implementing changes we think will have a positive effect,” Lantry told me three weeks go. “It’s up to policymakers eventually to decide whether or not that makes sense.”

Public engagement processes are inherently divisive. For those who participate, they can sometimes (but certainly not always) seem empowering. For those on the outside, or who hear about projects as they happen, existing public processes can seem laughably irrelevant.

Stadium deals are notorious for being places where democracy goes to die. (See also: Minneapolis stadium referendum.) But if you want to get involved with the St. Paul’s public process around the soccer stadium, applications for the “community advisory committee” have just opened. It remains an open question whether the engagement process will actually make any difference.

While we’re talking parking meters and a stadium, what is ‘public process’ anyway?