There’s a David Letterman vibe to St. Louis Park’s new public safety video. A reporter stands at an intersection of a popular bike/walk trail while kitschy music plays and asks people walking by, “Who has the right of way at the trail crossing?”

One woman hems and haws for a second before saying, “Um, I think cyclists and pedestrians have the right of way?”

A klaxon blares. WRONG, appears on the screen in big red letters. 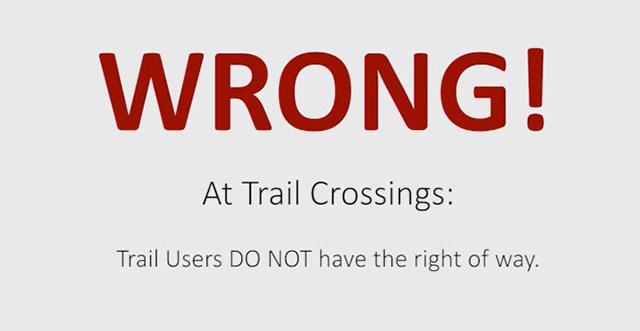 The video is the latest attempt by St. Louis Park officials to clarify the confusing situation at the intersection between a popular biking and walking trail and a busy road.

But as it turns out, right-of-way rules for trails are not very clear. The exact legal status depends on a finely split definitions and, in spite of the city’s best efforts, unless some key changes are made, everyone’s likely to remain confused about what to do at crossings like these.

In Minnesota, right-of-way determinations for cars, bicycles and pedestrians can be fiendishly complex, and depend on the definitions of “crosswalk,” “intersection,” “vehicle” and “roadway.”

Here’s how the debate goes for Beltline Boulevard and the Cedar Lake Trail, the intersection that appears in the video. Let’s first take a look at the case of someone walking along the trail, looking to cross the street.

However, state law also says (169.21 Subd. 3 (a)) that pedestrians crossing at “mid-block,” where an intersection does not legally exist, shall yield the right of way to vehicles on the roadway. If the trail (technically called a “multi-use path” or MUP) does not create an “intersection,” then pedestrians must yield to car drivers.

The answer depends on whom you talk to. According to officials in St. Louis Park, the answer is “no.” The Cedar Lake Trail is not a roadway, and therefore does not create an “intersection” when it crosses Beltline Boulevard.

(If you watch it again, you’ll notice that the video is also very careful to refer to the corner as a “trail crossing” each time.)

The legal standing of bicyclists is a little different from pedestrians, but the same sticky question applies. According to state law (169.222 Subd. 1), bicycles are legally defined as vehicles, and therefore the stop sign on the MUP applies to them just as it would to a car driver at a two-way stop. Therefore bicycles have to yield the right-of-way to the car traffic. 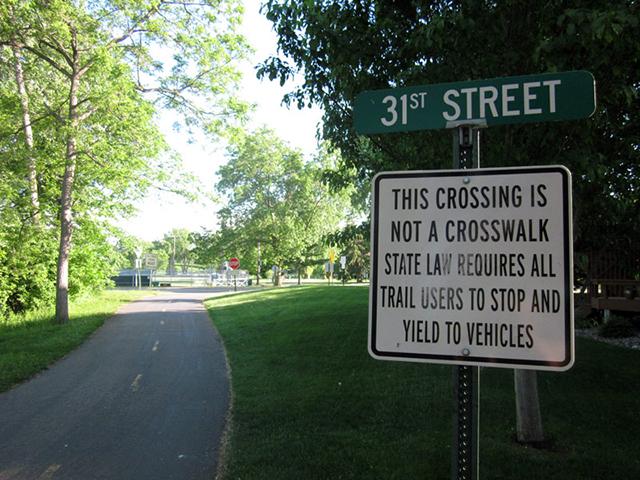 MinnPost photo by Bill Lindeke
A similar trail crossing on the North Cedar Lake Trail in St. Louis Park, with an attempt at clarifying signage.

However, state law also says (129.222 Subd. 4 (d)) that bicycles in a crosswalk have all the “rights and duties” of a pedestrian, implying that car drivers should yield the right of way to a bicycle in some circumstances, for example, if the corner is a legal intersection, and if the bicyclist is in the crosswalk providing ample room to stop.

To make matter muddier, the St. Louis Park video focuses on the most vague of its Cedar Lake Trail crossings. For other corners, like the equally chaotic crossing at Wooddale Avenue, the answer is clear. Because the trail crosses at a signal, it is doubtlessly a legal intersection, and drivers are required to yield the right-of-way to people on the trail.

Was the video correct?

“That video was a good one,” Ray Thomas told me. Thomas is an Oregon lawyer and long-time national bicycling advocate who is a national expert on these kinds of crossing laws.

“It seems like that’s a crossing, but if you subject it to the analysis of the terminology that we use in the legal world, it makes it so that a ‘multi use path’ or a trail is really not a sidewalk, and it does not create a crosswalk where it crosses a roadway,” Thomas explained.

However, for others, the video gets the matter wrong.

“The situation is simple, and St. Louis Park just got it wrong,” Hokan, a long-time Minnesota bicycle instructor, told me. “The law says that crosswalks exist at intersections that exist at the crossings of streets. That trail is designed for use by pedestrians and bicyclists, and bicycles are vehicles, and therefore it is a street.”

If Hokan is correct, pedestrians would have the right of way, the St. Louis Park video would be wrong, and drivers should yield. Either way, as you can see from the Facebook thread that erupted after St. Louis Park put up its video, resolving this issue seems like counting the number of angels on the head of a pin.

I’ve biked through this intersection many times, as well as the similarly confusing spots at WooddaleAvenue and Blake Road (in Hopkins), and I’ve seen all kinds of things. Some bicyclists are cautious, and can spend a long time waiting for cars to pass by. Others are aggressive, zipping through gaps between cars. Likewise, some drivers speed, others slow down, and some stop to let people on foot or bicycle pass by. (And some drivers honk at anyone who does something different from what they would do.)

The end result is a confusing mishmash, and there have been a slow but steady stream of nonfatal accidents. The latest mishap occurred last week, when a diagonally traveling bicyclist broke an ankle.

“Without question, it’s less than desirable,” Tom Harmening, the St. Louis Park city manager, told me. “Some time ago there was a crosswalk there, but we removed that. Our City Council and staff, along with the Three Rivers [Park District] have discussed this crossing a number of times. We’ve brought in consultants to look at the design options, and most recently made some changes 2-3 years ago that resulted in current configuration, adding a refuge and a curve.“

For someone walking or riding on the trail, questions about right of way are irrelevant. The only thing that matters is whether the oncoming car is going to stop for you. That’s one reason that, for bicycle advocates, the answer to the St. Louis Park problem is to either clarify the state law or change the street design.

“The video drives me bonkers,” Nick Mason told me. Mason is the deputy director for the Bike Alliance of Minnesota, the state’s largest bike advocacy group, and has been following this issue closely for a decade.

“I wish they would have interviewed someone coming up on that MUP in a wheelchair, or pushing a stroller. If our answer to safety is that people with limited mobility have no right to cross a less-than-safe roadway, we need to pause and consider that it’s inherently problematic. By removing those crossings [St. Louis Park] didn’t increase safety; they decreased their liability.”

Mason points to how Minneapolis designs trail crossings with specifically designated crosswalks for pedestrians, and calms traffic on intersecting streets to minimize danger. For example, the intersections of the Midtown Greenway with Minnehaha Avenue and with 28th Street have these treatments.

Mason and his colleagues at the Bike Alliance would also like to see a more nuanced state law around MUPs and intersections, one that takes into account the difference between a well-traveled path in the metro area and the many trail intersections scattered all around the state.

“Maybe this video will prompt more discussion and dialogue,” Mason told me. “We know our top legislative priority is working on bike and ped funding, because there’s not enough. But we’re still formulating policy issues, and we’re hearing that this is an issue.”

Meanwhile, St. Louis Park may not have to worry about these particular intersections for many more years. When the Southwest Light Rail is built, some plans include a grade separation for this troublesome intersection and others like it. Once a bridge is in place, nobody will have to worry about which came first, the bicyclist or the car driver.

Who has the right of way where trails meet roads? It depends