I still remember the time my mother made me walk to school. I’d thrown a morning tantrum and missed the school bus, but my mom’s normal reserve of patience was spent. She demanded that I walk the mile up the shoulder of the busy road we lived on. (Of course, she slowly drove behind me to make sure I was safe. And eventually she caved and let me into the car.)

It stands out in my mind because it was so unusual. Though my elementary and high schools were close to home, I can count on one hand the number of times I walked or biked there. Outside of a handful of kids we thought were weird, it just wasn’t done in the suburb where I grew up.

Over the last few decades, walking or biking to school has become an endangered-species activity, and children pay the price with increasingly inactive, unhealthy lives. But in Minneapolis, parents, principals and district administrators are brainstorming solutions around infrastructure and changing the culture around the ubiquitous drop-off.

According to data, the kids are in trouble. In era of ubiquitous electronics and car-centric cities, they don’t get enough exercise. The public health statistics read like a ticker tape of despair: Obesity rates have doubled in a generation, asthma rates have soared, and kids spend less time in nature. Increasing how many kids can safely bike or walk to school would seem like a great help. But there, too, thanks to changes in urban design, rates have been decreasing across the board. In 1969, half of all kids walked or biked to school; today that number is 13%.

On the face of it, Minneapolis schools are well positioned to solve that problem. Unlike most suburban or rural schools, which are often on the edge of town surrounded by moats of high-speed roads, Minneapolis’ old schools nestle within neighborhoods full of sidewalks. 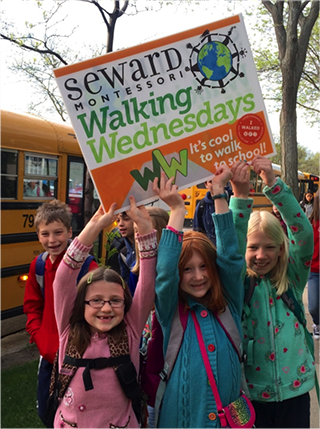 That’s why, just about every Wednesday, there’s an odd occurrence outside the Seward Montessori School in South Minneapolis. All the school buses stop a half-mile short of the school doors. All the tykes get out, and everyone walks together to the building.

“The kids easing in on the Wednesday morning turn delightful,” Tammy Goetz, Seward’s principal, told me. “All of our kids get dropped off, and volunteers — parents, as well as students — patrol all the corners and guide the whole entire school, all 850 kids, into Seward. They walk and talk and get some fresh air and ease into our day.”

The program is trending in Minneapolis schools, helped along by volunteers and a few grants. And, as you can imagine, it’s quite a weekly scene when the kids pile out of the buses onto the 31st Avenue sidewalks.

(Note: They cancel “Walking Wednesday” if it’s raining, and take a hiatus during the coldest months. Also, there’s an “opt out” bus for kids who can’t or won’t participate.)

“There’s no hard-core data, but again the tone feels good,” Goetz told me. “Kids are happy. Just that fresh air and exercise sets a tone for them for the day, and we know research out there says physical exercise for movement really does wake the brain up and make it more open to learning right away in the morning.”

But even an army of volunteers can’t solve all the problems with unruly drivers. Over in Longfellow, the same scene with the kids, the buses, and the walking, happens on each Monday of the week.

“Just last Monday, someone ran the stop sign that I was holding,” said Amy Brugh, who is one of the parent volunteers. “I’m holding up the sign in the middle of the street, and someone ran my stop sign. I was upset, but the fifth-grade crossing guard was the levelheaded one who got the license number. I love the idea of promoting this as a parent, but it’s a challenge to see how much drivers aren’t ready for kids to be walking and biking to school.”

One of the biggest changes for schools in the last decade has been a national grant program called Safe Routes to School (SRTS), started by the late Minnesota Rep. Jim Oberstar. The program aims at improving street safety around schools though infrastructure and encouragement grants.

For example, cities and schools can apply for a pot of federal dollars to improve intersections, education programs, or nearby bike lanes. But the process can be prohibitively time intensive, and infrastructure dollars remain infinitesimal relative to the rest of federal transportation money.

“For Minneapolis as a whole, it’s a huge challenge to try to promote biking and walking to school; but the Safe Routes to School program and staff there do a great job,” Amy Brugh told me this week. Brugh has two children (ages 11 and 9) in the Minneapolis Public Schools (MPS) system. She also heads the board of the Minneapolis Bicycle Coalition, where she works on focusing their efforts on the challenges faced by bicycling families.

“We started by trying to get bicycles into schools,” Jenny Bordon, Minneapolis Public Schools’ Safe Routes to School Specialist, told me. “We had a little bit of money out of the health department, and put out application to schools to apply to get bikes in their schools. There was a real positive response.”

In the early days, most of Minneapolis’ bike education programs were grassroots and informal. For example, there might have been an interested teacher gathering donated bicycles, or a few bike racks in front of a building. But the district has scaled up and become more organized. MPS now has a mobile “bike fleet,” which travels to different schools to foster bicycling education, maintenance training and group rides.

“The big barriers to biking to school is distance and accessibility of bicycles,” Bordon explained. “Many kids don’t have bicycles, or have had a bike and had it stolen. [But now, schools] can check out the district-owned bicycle fleet to do the bike education and safety training, and take some off-campus rides. Since August, we’ve had Loring, Marcy, Seward, Whittier and Bethune involved.”

From what I’ve heard, parents have little trouble getting kids interested in biking or walking. Rather, the big problem is safety. Just as “free-range parents” will let kids wander in certain directions but not others, parents are hyper-conscious of problem spots. For example, Amy Brugh worries when her two boys have to cross busy Cedar Avenue. And the safety issue leads to another problem: so-called “parent shaming.”

“Other parents are the people who make me the most uncomfortable,” Brugh told me. “When my kids are patrol guards, are other parents in a hurry to get where they want to go? I think we definitely could do a better job of building community around these programs, and not just expecting people to just be supportive of them. That would be the other [important] thing, to manage pushback around parenting norms that don’t match ours.”

With the earlier darkness from the time change last week, safety concerns are more intense than usual. 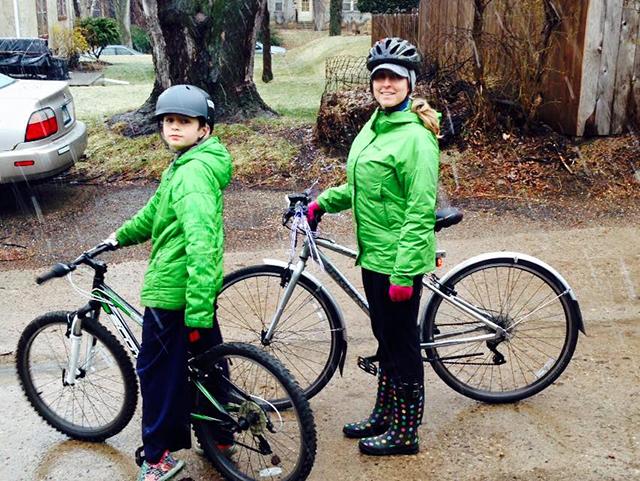 “He walks home from bus stop in evening by himself, but now he’s walking home in the dark,” Brugh told me, describing her son Avery. “I think he’s fine, and should be able to walk that far by himself. But especially with the kid run over on Halloween, that is haunting and jarring and I can’t stop thinking about that. Something that happened on Halloween — it could be any night or any kid getting off his bus and walking home from school.”

Real change for Minneapolis schools has to come from the students themselves. And judging by the overflowing bike racks at high schools like Minneapolis South, it’s happening.

“There are probably 200 to 300 kids on bikes, if it’s a good day,” Mack Hanson told me when I asked him about whether South High could do more to boost bicycling.

Hanson is a senior at South who loves racing mountain bikes and riding around the city. He says the South High principal has been especially encouraging about students bicycling.

“They’re trying everything,” Hanson told me. “We have a bike maintenance spot now that our environmental activist group got funded. We have bike-to-school week that’s expanded. It’s way better than driving. Traffic sucks. I hate cars. I wear my “cars R coffins” T-shirt all the time. That’s how I met a bunch of my friends … hanging out by the bike racks. Especially with the hipster craze now, everybody wants to ride bikes.”