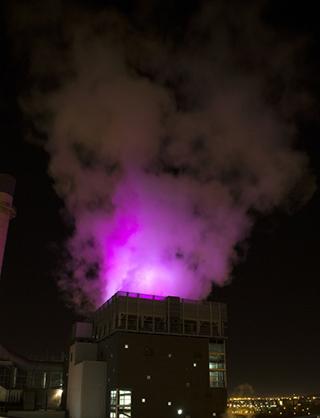 plumeproject.com
Artist Asia Ward: “The plume raises itself above the city almost like a giant banner.”

Last night St. Paul’s steam plume reminded me of “The Wizard of Oz,” the part where the head of the great and powerful Oz appears projected into a cloud of smoke. It’s because The Plume Project, a Knight Foundation-funded public art project, “flipped the switch” this week and launched a two-month marriage of light and steam. The project, which emerged from a collaboration between artists and scientists, represents a high-profile attempt to shed light on the underground infrastructure all around us.

St. Paul, like most U.S. cities, college campuses, and a whole host of smaller institutions, has a “district energy” system where buildings pool together heating, cooling and energy-generation infrastructure. St. Paul’s hot water system dates back to the early ’80s, during the Latimer administration, and the city’s old-timers remember visions of collectivized energy flowing up the hills from downtown to University and Summit Avenues.

“We have 53 miles of pipe underneath the streets of St. Paul,” Nina Axelson, the public affairs vice president, told me. “The most primary role as a utility downtown is heating and cooling, a nonprofit that delivers hot water to 200 buildings and chilled water to 100 buildings.”

The plume plant, built in 2003, was an addition that created a combined heat and power plant that uses biomass as a fuel. Like other newer urban utilities, District Energy represents a reversal of electricity centralization approaches that dominated the mid-20th century, largely because of particulate pollution caused by now-retired urban coal plants like St. Paul’s High Bridge and Minneapolis’ Riverside locations.

While centralizing electricity production in places like exurban Becker, Minnesota, came with local environmental benefits, moving energy out of the city comes at a the cost of potential efficiency gains. Having “combined heat and power generation” like St. Paul’s central plant allows the normally “wasted” steam from burning biomass for electricity to be used for heating.

When the original goal of expanding the system of hot-and-cold water and heating steam outward proved difficult (often because of long leases required for residential property to buy in), District Energy focused on improving and greening its downtown energy footprint. Thanks to a rooftop solar project that required the system to shift from steam heat to hot water, they’re hoping to be completely fossil-fuel free in the near future. 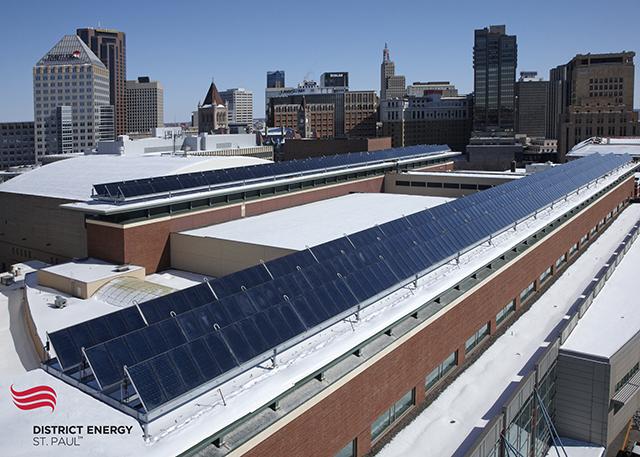 (In Minnesota, solar grids aren’t able to heat water to the point required for high-pressure steam, around 350 degrees; but the lower 150-250 degree temperatures of hot-water heat are achievable, making solar installations practical.)

Origins of the Plume Project

Unlike the lights at the top of the Target’s headquarters, the Plume Project isn’t just about making the skyline pretty or showing off new technology. The artists involved formed a partnership after working on a two-year artist and science project called the City Arts Collaboratory, funded by Public Art Saint Paul.

“For me the starting point for the project was when I first toured District Energy as part of a series of field trips around the city, investigating places where people were doing work that make the city run,” said Emily Stover, who is trained as an architect.

The plume also has a unique siting, next to City Hall and the Science Museum of Minnesota atop the bluff. It’s visible to the entire river valley.

“District Energy is in a nice place for projection,” Asia Ward, an artist and scientist who co-owns a renewable-energy education company, told me. “The plume raises itself above the city almost like a giant banner. Not knowing what looks great up there, we decided to try three different ways. Each of the artists came up with their own project based on the [energy-related] goal.”

In a way, the plume lighting project has its own scientific aspects. Because nobody has really done anything like this before, anywhere in the world, the artists didn’t quite know how the different projects would look to the public. When they decided to do three concepts it became a sort of artistic experiment using cutting-edge technology.

For her part of the project, Ward is going to commission what she calls a “coloring contest”;  anyone can submit a video or image to be projected via a website set to launch next month. Meanwhile, Stover commissioned poems from artists who were given tours of the steamy power plant, and anyone dialing a phone number will be treated to a light-interpretation while they hear the poems on the line.

Stover’s collaborator, sculptor Aaron Dysart, has the second data-driven part of the project. His idea came out of his obsession with images of the sun from a NASA solar observatory.

“When I lived in Lowertown, I would do the same thing with the plume,” Dysart told me. I would walk out and look at it for an hour, it was so stunning, so beautiful. [So] the sun is basically the power plant of our planet — 99.8 percent of all life is based on the sun, and [the plume comes from the] central power plant of St. Paul.” 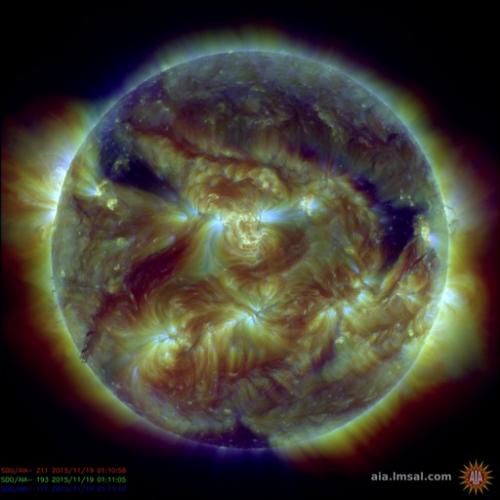 The project hired a programmer to help translate the artists’ data into colors, and the lights that Stover and Dyson are using had to be carefully chosen for their durability. Not every light is designed to live for months inside a plume of heated steam.

“It’s been tricky,” Dysart told me. “These are highly specialized lights [and] you can’t get basically much more of a harsh environment. They have a specific IP55 rating. You can run them through an industrial dishwasher. They’re meant for insane humidity.”

“I have come out of this project in utter awe of the sun,” Dysart told me. “I have steam in my heart; it’s filled with plume in the best possible way.”

In some ways, the District Energy steam plume is the exhalation of the city, the last breath of a complex system of energy production that flows all around the downtown. It’s also a highly visible trace of our urban energy footprint, the only feedback most people get about energy besides their monthly bill. That’s a big part of what motivated the project in the first place, a fact that might get lost for folks entranced by the pretty purple and green colors.

“Conversations around energy sources end up with things like solar power or coal or gas,” Asia Ward told me. “They don’t talk about process. How does it get to your home? Bringing that into the conversation is difficult, [and it’s] nice to get it started in a creative way.”

With its innovative art project, this winter’s experiment in lighting might have ramifications for the future of urban energy — and maybe, as the colorful plume shimmies through the night, a few shivering St. Paulites might connect their heat with the giant radiator on the downtown bluff.

On the other hand, District Energy people are always trying to think of ways to make their plant more efficient, and diminish the wasted heat that forms the plume.

“We’ve got ideas how we could incorporate that steam [instead of releasing it into the air],” Axelson told me. “Converting a thermal tank on Kellogg to be able to do hot water storage could capture some of the plume. Very close-by development opportunities could use that lower temperature, lower pressure steam to do snow melt. The plume’s days might be numbered.”