The Lake Street Kmart must be one of the strangest sights to greet a Minneapolis visitor. As it runs north from the city’s southern border, Nicollet Avenue, arguably the city’s most famous street, suddenly dead-ends halfway to downtown. The street itself runs directly through a massive parking lot and straight into the front doors of a vintage ’70s-era Kmart store, the red-and-white sign hovering over what should be public right-of-way.

It’s a remnant of desperate times, when Minneapolis tried to bulldoze its way to economic relevance by creating an urban shopping mall. When the original deal fell through, faced with vacant lots, the City Council reluctantly turned to a Kmart proposal that came with a bitter poison pill: replacing one of the city’s key intersections with a massive parking lot straight out of the suburbs.

Minneapolis is not alone in struggling with an aging big-box store. In suburbs, cities and rural areas, these buildings can present a reuse and rehab conundrum, particularly as retailers become more sophisticated about controlling leases and redevelopment. But in Cottage Grove and Minneapolis, after years of struggle and blight, maybe some progress is under way.

Big-box stores and their parking lots

While unflattering, the term “big box” is descriptive. It connotes the utilitarian era of convenience, the post-pedestrian evolution of American retail into an array of shelving and sparsely populated caverns of commerce. And of all the qualities of the big box, it’s the parking that most defines it. Almost without fail, these stores are surrounded by huge parking lots typically designed for peak-usage periods, say midafternoon on the day after Thanksgiving, which means they usually sit at least half-empty during the rest of the year.

The large lots make big-box stores an odd fit for urban areas premised on walkability. There are a few spots where they’ve been shoehorned into the city — typically old industrial or rail-yard areas like Lake Street, “the Quarry” in Northeast Minneapolis, or University Avenue in St. Paul’s Midway. In each of these cases, walking or biking to the store from the surrounding neighborhoods involves a dispiriting trudge through the bleak chaos of blacktop.

With the big-box model, stores are rarely remodeled. When the Target store on University Avenue was “upgraded” to a grocery-stocked SuperTarget in 2006, the company tore the old store down and built a brand new building rather than rehab the decades-old concrete. So too with the Lake Street Walgreens, recently replaced with a next-door doppelgänger. A kind of “retail cannibalism” emerges, where companies compete for market share with ever-shinier facades that leave aging stores behind as the asphalt fades. 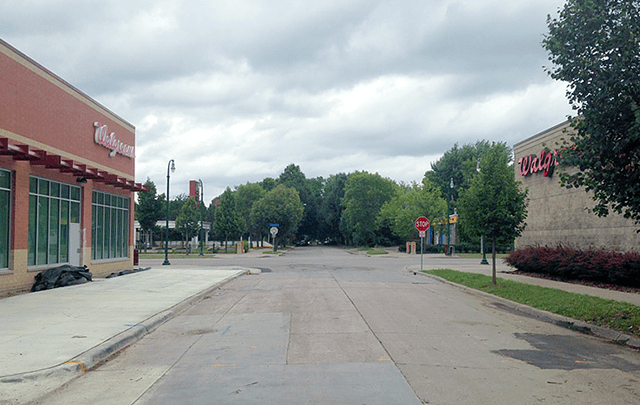 The case of the Cottage Grove Home Depot

Nobody at City hall knows exactly why the Cottage Grove Home Depot closed its doors eight years ago, but they will gladly talk about the difficulty of reusing the building. The old store sits in the city’s “gateway North” area, a key spot for the St. Paul suburb’s shopping district. An abandoned big-box store bearing a “For Sale” sign sends the wrong message for a city trying to attract growth and development.

“It’s one of prime entrances to our community,” Jennifer Levitt, Cottage Grove’s Community Development Director/City Engineer, told me this week. “You really want to show that your community is growing and vibrant, and a vacant building sitting there doesn’t say that.”

Levitt blames the poor economy and bad timing for the vacant store, but for almost a decade city officials tried many different redevelopment angles, offering deals that never came to fruition to various companies and developers. Finally, this month, the city announced a new tenant for the 116,000-square-foot building.

“We now have a developer eager to acquire the property, with [Iowa-based grocer] Hy-Vee in the center,” Levitt said. “Everybody is excited about shopping.”

When I asked her about the challenges of reusing old stores, she explained that size is a key factor.

“Some of it is just trying to figure out public/private partnerships and different uses that can go into that large a square footage, dealing with the economy within a recession, and coming out of a recession posed other challenges,” Levitt told me.

In some ways, Cottage Grove is lucky. Other shuttered big boxes around the country have never found a new retailer willing to rehab the building, and gone on to become more “outside the (big) box” ideas like flea markets or megachurches.

One reason Cottage Grove had such trouble finding a suitor for the old store was that Home Depot, the property owner, didn’t make it easy. Its sales agreement included a provision banning future tenants from selling anything in Home Depot’s inventory, a clause that infuriated the mayor. These kinds of “competition clauses” are part of a growing trend where retailers have become savvy about decreasing competition, often at the expense of the cities that host them.

“I can’t tell you how angry and frustrated I am,” the Cottage Grove mayor, Myron Bailey, said at the time. “ I am encouraging our citizens to not shop at Home Depot, but I am not literally calling for a boycott.”

A Minneapolis-based sustainability think tank, the Institute for Local Self-Reliance (ISLR), issued a report earlier this year on how some big-box retailers are even using the obsolescence of old stores as a tactic for lowering their tax burden. According to an article by ISLR researcher Olivia LaVecchia, Lowe’s has begun using the so-called “dark store” argument to challenge assessments in court.

In her article, LaVecchia quotes an assessor hired by a Michigan Lowe’s, explaining why its building’s uselessness reduced its value:

Unlike many other commercial properties, free standing ‘big-box’ stores like the subject [property] are not constructed for the purpose of thereafter selling or leasing the property in the marketplace.

The practice has spread over the last year or two throughout the Midwest, cutting the store’s taxes in half, threatening billions of dollars in potential tax revenues for cities and suburbs, and prompting state laws trying to limit the tax dodge. Though the practice has not yet reached Minnesota, as cities compete for big-box retail anchors, it’s becoming increasingly important that they make sure the retail models improve their overall fiscal picture, especially in the long-term.

The future of the Lake Street Kmart

While the Lake Street Kmart dates to an earlier era of big-box development, its lease presents some challenges for city leaders looking to reopen and redevelop the Lake and Nicollet “intersection.” But, as Peter Callaghan reported here last week, after a decade of talk the city might finally be making some progress, announcing “site control” over the parcel with a purchase of  the 3-acre Supervalu portion of the strip mall. But, as with redeveloping strip malls for transit, making a case for redevelopment remains challenging for cities interested in building “transit-oriented development” (TOD).

“The onus is on the people proposing to do something different,” David Frank, the city’s Director of Economic Policy and Development, told me. “It’s a question about whether enough incentive can be offered. It doesn’t have to be money, but it needs to work so that redevelopment is also in the best interests of the people with some say so, like the tenants, about whether to try something different.”

The delicate negotiations mean that it’s too early to book your tickets for the parking lot demolition party, and people like Frank take pains to carefully weigh their pronouncements with a dose of pessimism. The main remaining sticking point is Kmart’s long-term lease, which doesn’t run out until 2053. According to Frank, decades-long leases remain industry standards, and are required to ensure long-term stability and reassure cold-footed investors.

In fact, Kmart recently released a statement pushing back on the city’s calls for change, calling for “a clear understanding” of any redevelopment timeline. The store is still profitable, and despite the purchase agreement, Kmart must approve the redevelopment plans.

“You should not expect bulldozers anytime soon,” Peter Wagenius, Mayor Betsy Hodges’ policy director, told me. “We do not have a street design. We do not have a design of the development. Since we still have this important question of the lease, and Kmart’s role in future of property, it’s premature to be doing that kind of work. If we get to that point, there’s going to be an elaborate community process to weigh in.”

That means you likely still have a few years to appreciate the one-of-a-kind mural on the backside of the Kmart store. Painted in the 1970s, it depicts the story of Nicollet Avenue and the Kmart’s construction: a gun-toting battleship representing City Hall’s bulldozers juxtaposed over hamstrung politicians with big ideas for the old neighborhood. 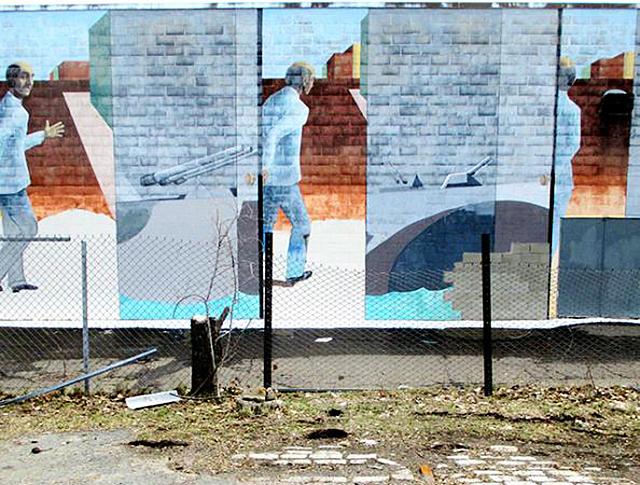 MinnPost photo by Bill Lindeke
The one-of-a-kind mural on the backside of the Lake Street Kmart store.

The white elephant in the room — what to do with an old big-box store?