“A president talks about principles, but a mayor collects the garbage.”

That’s what Park Won-soon, the mayor of Seoul, South Korea, and one of the leaders of the international Compact of Mayors program, wrote last June in an article entitled “How Cities Are Key to Curbing Climate Change.”

The Compact of Mayors, which now boasts more than 100 U.S. signature cities, is an effort to forge a bottom-up coalition of global cities fighting CO2 pollution. Last week, St. Paul joined Minneapolis as a member, pledging to measure and reduce its municipal climate emissions.

But given the atmospheric nature of emissions, what can cities really do? Here are some answers from some of the state’s carbon reduction leaders.

The Compact of Mayors

Watching the Paris conference, it can be tempting to wait for international consensus to swoop down and solve our fossil fuel problems, hoping for a deus-ex-machina agreement that would take city actors off the hook for difficult decisions on energy and transportation issues. But even if everything in Paris goes swimmingly, and countries live up to their voluntary reduction targets, few believe it will be enough to stop the warming planet. 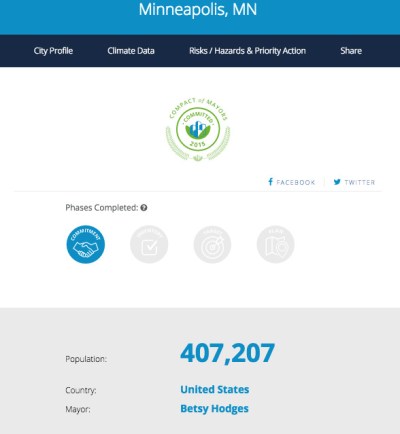 When cities sign up, they agree to proceed through a series of steps.

While there are many limits to what cities can do, actually solving the problem of climate change will still be up to the cities. The “compact” uses some simple psychological tricks. When cities sign up, they agree to proceed through a series of steps, each of which gets them “badges” that resemble “leveling up” in a video game. For example, after Step 1 (“commitment”), a city has a set number of years to reach Step 2 (“inventory”), which requires a careful accounting of both the carbon footprint of a city’s energy use and a measure of “in-boundary travel” (transportation emissions within city limits). Cities then set “targets” (Step 3) and create “plans” (Step 4) using metrics that are placed prominently (and competitively) online.

In a sense, the Compact of Mayors is the Paris plan writ small, relying on voluntary targets and commitments instead of regulations or taxes. But because cities can more easily act, in some ways they might have more potential to foster behavior change than more distant levels of government.

“Lot of cities are making progress by doing [carbon reductions] at the city level,” Brendon Slotterback, who worked for years as Minnepolis’ sustainability program coordinator, told me some time ago. “I think it’s a small enough scale that you can have a sense of shared identity and shared vision around things.”

It’s no surprise that Minneapolis was the first Minnesota city to sign up for the Compact of Mayors, because the model mirrors what the city has already been doing for years. Back in 2012, Minneapolis passed a “climate action plan” that created a series of 26 indicators to measure for sustainability progress. As such, Minneapolis’ “inventory” should be easy to create; it’s already counting energy impacts from such diverse areas as employment equity to tree canopy cover to miles of bike lanes.

“We used a geographic base inventory, [showing] what’s happening in the city in a given slice of time,” Slotterback told me. But, as he explained, developing good measures can be really challenging because of the porosity of city borders. For example, Minneapolis included a “share” of air travel as part of its transportation footprint, and tried hard to account for inter- and intra-city trips, in addition to things like garbage collection and building efficiency.

“There are different methods,” Slotterback said when asked about the difficulty of measuring transportation emissions. “If somebody drives through our community on the freeway, should we count that as ‘ours’? The current method is based on where we have good data, on freeways and state aid and county highways. But there’s other ways to do it. Take just the trips happening inside your boundary, like someone driving from the house to the grocery store. But if someone’s commuting into Minneapolis from Lake Elmo, half of that trip distance should be attributable to Lake Elmo and half to Minneapolis.”

In a metro area as fragmented as the Twin Cities, with 16 counties and more than 200 individual cities, the complexity of climate accounting is multiplied. Because of the limited municipal scale, any emissions reductions might simply be “moving” them around. A city like St. Paul can claim “emissions reductions” when a factory closes, but in reality, those emissions have simply moved to another city, state, or even offshore. The same holds true for action at the state or national level.

“Transportation is a regional system, and our effect is limited depending on who you talk to,” Slotterback told me. “There’s definitely a danger with the accounting of how do you account for things and losing sight of the fact that this is a global issue and not just looking for strategies that will move emissions sources outside of the city.”

Are there partisan and geographic climate rifts?

Paging through climate change news, I’m always left with the impression that there are huge splits about the perception of the seriousness of the issue, rifts that align closely with urban geography and ideology. According to recent polls, Republicans and Democrats remain far apart on whether climate change is a serious problem. (It only takes a glance at recent GOP presidential debates to see this chasm.)

Meanwhile, the kinds of transportation changes (e.g. bike lanes, transit) that appeal to the core city are anathema to exurban and rural voters, who depend on driving for nearly every trip. In other words, climate change seems to map neatly onto the growing urban/rural divide.

But maybe these differences are more semantics than reality.

“We thought it was partisan,” Abby Finis told me last week. Finis, who works as a planner the Great Plains Institute, an energy policy nonprofit, helps run the Minnesota GreenStep Cities project, another sustainability coalition trying to coax voluntary efforts out of Minnesota cities.

“We did a survey of participating cities a couple years ago and found it’s really not,” Finis explained. “You occasionally come against the ‘Agenda 21’ stuff, but generally it hasn’t panned out to be a partisan issue. Once cities see the benefits of sustainability — without necessarily calling it “green” — if you take away those environmental words and look at it from an economic development or energy independence standpoint, you are much more responsible to the community members [and make progress].” 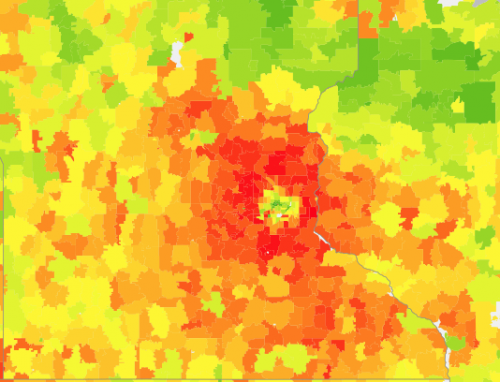 Finis’ optimism mirrors that of others working on climate policy in the state, as J. Drake Hamilton, Fresh Energy’s science policy director, told me last week from her perch at the Paris talks. Fresh Energy is one of the nonprofits that have been trying to create larger scale change at the state level, by reforming the electricity grid.

“I don’t actually think there’s’ much of an urban/rural divide among people in Minnesota,” Hamilton told me. “There’s definitely a need for diversifying our economic opportunities. Clean energy that fights global warming is something that does that. Wind development in rural Minnesota has helped bring jobs and money to those counties.”

For example, Hamilton points to how community solar gardens, a trending source of sustainable electricity, knits together demand from urban areas and the exurban landscape, where cheap land that isn’t prime farm territory has become the ideal location for installations.

Building coalitions of cities working together can require a bit of creativity, as Minnesota’s Paris delegation shows. With the help of Mayor Chris Coleman, a team of mayors from cities along the Mississippi River — including St. Cloud, Dubuque, Memphis and others — are attending the conference and announced an agreement Tuesday morning between cities linked by waterways.

“20 million people drink from the Mississippi River every day,” Anne Hunt told me. Hunt, St. Paul’s environmental policy director, is in Paris helping to attend a “summit of cities” on forging municipal alliances. Thinking about water resiliency is one way to build a coalition.

“If there were long protracted drought, what would that mean for drinking water?” Hunt asked me last week. “Drinking water supplies are already tapped. The other concern we raised is just the ecological function of the Mississippi River. Forty percent of water fowl migrate up and down the river each year, and it’s a huge provider of fisheries and other kinds of economic benefits like barge traffic.”

For Hunt, Coleman and the rest of the Mississippi mayors, climate change isn’t simply a coastal problem, and there’s a lot of untapped potential to use geography and proximity to build alliances between cities.

“What gets measured is what gets done,” Hunt told me. Meeting pledges and trying to ratchet down energy consumption [for the] city, we’ve tried to work hard with other partners by building more transit, improving the bike plan, providing car sharing and driving building efficiency.”

Balancing the scales of action

It’s tempting to look at the warm weather this week — particularly the eerie haze that hugged the skyline on Monday morning — and grow despondent. No matter what happens in Paris or the White House, it won’t take the responsibility for change off of local leaders, who have to make tough decisions about buildings and transportation where the rubber meets the road. But thinking about the big scale is still crucial. For example, if Minneapolis, St. Paul or other metro cities are able to meet ambitious CO2 targets in the future, it’ll be because Xcel Energy committed this year to a groundbreaking reduction of coal-fired electricity, which will make it much easier for cities to meet their goals.

“That’s really important,” Hamilton explained. “[Xcel’s cuts, along with others around the country] are like taking 166 million cars off the road. So that’s why Fresh Energy has been focused for several years on this. Power plants are such a big slug of the climate problem.”

While cities don’t offer the only solution to the daunting challenge of CO2 emissions, they seem to offer a tantalizing “end around” elusive treaties forged by heads of state. The real work begins when the Paris conference ends.

“The main point to drive home is that development is local and occurs in communities,” Finis explained. “Whatever policy is made at the state or national level is going to be implemented at the local level. It’s in the city’s interest to take action and be at the forefront of these decisions.”

Can cities do anything about climate change, or do we have to wait for an international pact?