When you move to St. Paul, nobody tells you that the city doesn’t plow the alleys. And neither does the city collect household garbage. It’s something homeowners have to arrange for themselves, ideally in cooperation with their closest neighbors.

Like any pair of siblings, St. Paul and Minneapolis have much in common. Yet just as small differences are amplified by familial intimacy, Minneapolis’ ruthless coordination and St. Paul’s stubborn lack of the same reveal something about their character. Today, especially on the issue of garbage collection, the environmental benefits of organizing the city’s haulers might finally be changing the conversation in St. Paul.

When they were built, alleys in St. Paul were privately paved, and they’re still privately plowed in wintertime. So it’s around this time of year when the annual ritual of trying to organize alley plowing comes to fruition. I’ve been following the conversations and recommendations on the city’s various Facebook pages, and paying attention to people’s individual stories (like this lovely collection).

For the most part, volunteering to be the snowplow organizer is a thankless task, and most burn out after a year or two of negotiating contracts and trying to round up money from their neighbors. The best-case scenario is that an assertive and financially secure person takes charge, hiring the contractor, collecting money from as many people as possible and making up the difference out of his/her own pocket. The worst case resembles Hatfields and McCoys. (For example, you don’t want “that guy” who dumps all his snow into the alley for others to clean up.)

“I’ve lived in this city my entire life, and the city has never plowed alleys,” Kathy Lantry told me. Lantry, a long time City Council member from the East Side, has now become St. Paul’s public works director. Though she’s never lived on an alley, she empathizes with people’s concerns over alley coordination.

“It’s an artifact from way back in the day, whenever that day was,” Lantry explained. “A system had developed where neighbors got together and collected money and somebody did it for them.”

According to Lantry, city alley plowing would be an expensive proposition involving the acquisition of a whole new fleet of smaller trucks, and an expansion of the “plow cycle,” requiring both time and staffing. She believes that the current system says something about the unique character of St. Paul, especially when compared to its western neighbor.

“I do think it’s the character,’” Lantry told me. “Things developed over time, and that [bottom-up] system just kept expanding because it works.”

Plowing isn’t the only DIY alley dynamic in the city. St. Paul doesn’t have municipal trash collection either, and the problems of plowing are multiplied with trash. St. Paul’s trash story began in 1969 when a state law banned backyard trash burning.

(This had been the preferred method of waste disposal in the ’60s, unbelievably to me. “Garbage haulers” in the era would simply collect ash from people’s homes.)

Beginning in 1970, cities had to figure out what to do. In Minneapolis, the city began coordinating municipal collection, developing a half-and-half system of splitting trash collection between official city trucks and a consortium of local haulers known as MRI (Minneapolis Refuse, Inc.). 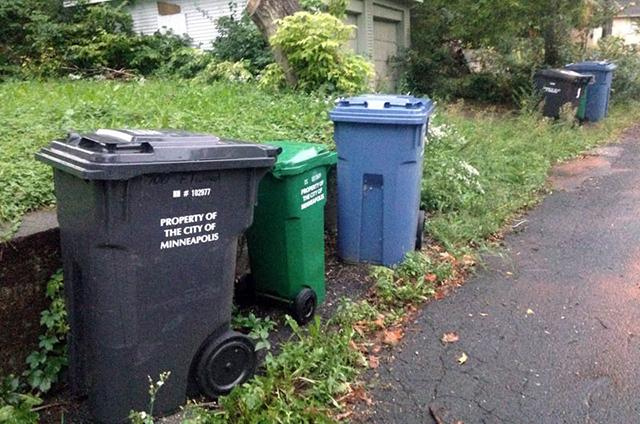 In St. Paul, a similar system existed for a little while too, albeit with no centralization of bins or billing. Until about 1980, the city ran a municipal waste system in competition with dozens of smaller “local” companies. But the city began accumulating more low-income and difficult-to-invoice clients and, as expenses increased, they phased it out. For the last 35 years, all of St. Paul’s trash has been handled by an ever-changing set of private companies negotiating contracts with individual homeowners.

As with the Grand Avenue parking meters, there have been recurring attempts to change the system, starting in 1979, when a city proposal for municipal waste was rejected. (A St. Paul Dispatch poll found that 61 percent of respondents were against trash organization.) In 1987, 1998, and again in 2009 the issue reappeared on City Council agendas, but each time, nothing came of it.

The case for organizing garbage

All those historical facts came from a recent study and proposal for organized hauling released by the Macalester-Groveland Community Council last week, a very thorough document funded by a environmental grant. The report, put together with the help of summer student interns from Macalester College, marks the latest and most wide-ranging attempt to organize the city’s trash.

The main benefits of organizing involve cost, energy and efficiency of geography. The Mac-Grove proposal would replace the current unorganized system with a geographically balanced “consortium.” Each of the city’s current 19 garbage haulers would be allocated a geographic “share” of the city, and instead of serving houses scattered through the city, each existing hauler would get a geographically limited area. Each hauler would be assigned a specific neighborhood, and instead of three or five trucks traveling down neighborhood’s streets and alleys each week, you would only have one.

(There would also be an “opt out” option for anyone who didn’t want to participate. Presumably these people would then handle their own trash.)

If you talk to haulers, the existing system works just fine. Ken Bergquist, of Ken Bergquist and Son Disposal Inc., insists that the current system is more efficient than people think.

“When I’m at a client’s house I’m making money, and when I’m going between two of them it’s costing money,” Bergquist, who’s against the proposal, said at a recent meeting. “What makes more sense, having a tight route or going all over hell and back? I choose to keep my routes tight. I’ve consolidated them over the years. I work hard at it. I work diligently at it.”

Externalities of the bottom-up system

Beyond the energy and cost benefits, the current system masks some more hidden consequences of the free market. For example, because alleys are all privately constructed, they don’t meet uniform standards, and are rarely designed to withstand the pressure of large trucks. Yet the existing system drastically increases the number of trucks that run down alleys, and garbage trucks are particularly hard on asphalt.

The average truck weighs 32 tons and gets 3 miles to the gallon. While there’s a complicated relationship between weight, vehicle design and road wear, studies suggest that each truck is the “wear and tear” equivalent of 1,125 automobile trips. 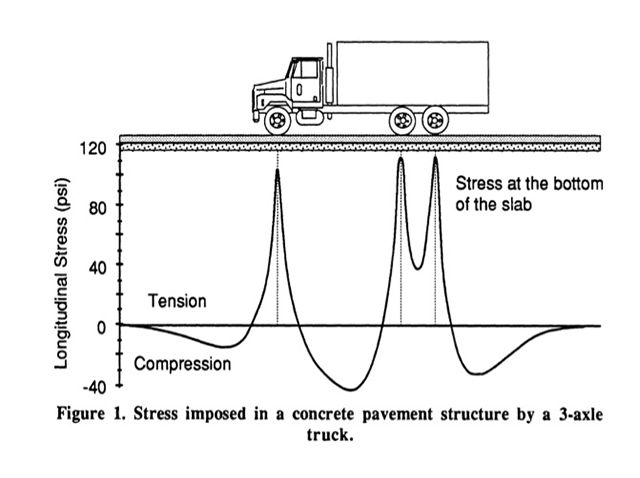 Gillespie, T. D. “Effects of heavy-vehicle characteristics on pavement response and performance.” 1993.
Studies suggest that each garbage truck is the “wear and tear” equivalent of 1,125 automobile trips.

Other externalities might include particulate pollution, noise and safety concerns, as well as things like having more organized billing and collection of “bulk items,” which are often simply dumped onto the city’s vacant land. When Sheila Sweeney and Liz Boyer, both representing the Mac-Grove Community Council, presented the plan last week to a somewhat skeptical audience, they seemed to breathe a sigh of relief that so many people shared their concerns.

“I thought the meeting went well,” Sweeney, the president of the neighborhood group, told me. “Frankly I expected more organized opposition. We have opened ourselves up to doing talks in other parts of the city — four more throughout the city.”

The romance of the trash man

At the community meeting, held in a packed Macalester College classroom, public opinion seemed about split on the proposal. While the environmental benefits are pretty clear, there remains a certain sweaty romance to the image of the noble trash man, a small-time entrepreneur eking out a living in the least glamorous way possible.

“I fully support the local little guy,” said Alisa Lane, who lives on Grand Avenue and doesn’t like the proposal. “It’s hard for me to want to go into this big system because I think the little guys, over a number of years, they’re going to not be around. If they want to expand, they can’t, which is unfortunate.” 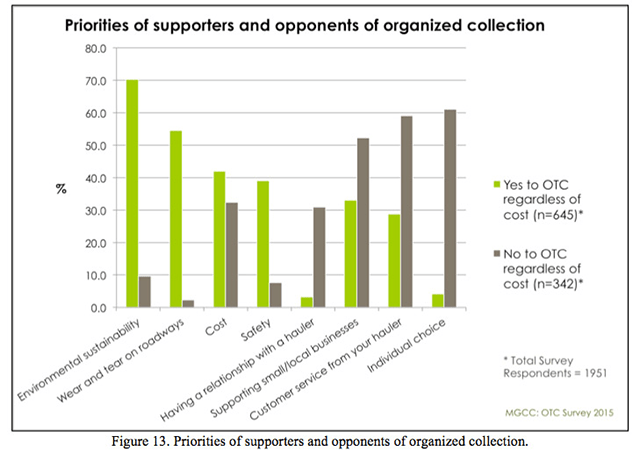 How you view the trash problem depends a great deal on where you are, and the social demographics of your neighborhood. For a wealthier area like Highland, having a “personal relationship” with your trash hauler might be commonplace. In other neighborhoods with less time and money to devote to the cause, the DIY garbage system has fewer obvious benefits.

“There are empty lots, there are abandoned houses, and there are low-income homeowners who can’t afford trash pickup, or don’t know how to do trash pickup,” said Jean Moreau, who lives in Frogtown and loved the idea of organized trash. “A lot of garbage winds up in everybody else’s yards, next to their bins, or in the middle of the alley. In our neighborhood, the bottom line is just get the trash picked up, please! I don’t have any emotional attachment to a hauler; I don’t really understand people who do.”

St. Paul’s alley goings-on are a textbook case of civics, where cities have to decide what services should be private and public, how to balance cost and equity concerns, and whether efficiencies of scale are worth the decrease in entrepreneurial opportunity.

At one point during last Wednesday’s presentation, someone muttered “socialism,” and the room broke out into laughter. But there’s truth there. Today, St. Paul remains a world where anyone with a bit of gumption and a truck can pull themselves up by their trailer hitches and start a business.

Come next year, though the same people might be picking up trash, with “big government” organizing everything something important will have changed. The environmental benefits are compelling, but so will be the loss of free-market innocence.