Spend much time going to neighborhood meetings in Minneapolis and St. Paul and it’s usually only a matter of time before the “G-word” rears its head. Discuss a new development, park or trail, or zoning change, and the sound *cough* gentrification! *cough* will rise from amidst the ranks.

But a new study [PDF] from the Institute on Metropolitan Opportunity released this week seeks to debunk gentrification concerns. According to the data going back 15 years, by nearly any measure gentrification isn’t actually happening in core areas of Minneapolis and St. Paul. Instead the report argues that the cities’ poor and middle-class neighborhoods, the places often invoked in gentrification conversations, are growing even more removed from our region’s wealthier communities.

Looking at the data

Defining “gentrification” is never easy. It can be a catch-all term that refers to a range of issues including racial disparities, architectural critique, city subsidies, rising rents, or simply the passage of time.

Here’s how the report describes it:

“[Gentrification is the] displacement of lower-income households by higher-income residents, replacement and/or rehabilitation of housing stock, and displacement of racial minorities by higher-income white residents. The changes are also usually depicted as being very rapid in nature – in other words, not the product of gradual neighborhood changes, but the product of economic and social forces “pushing” against resident populations.

The new report, titled “Are Minneapolis and St. Paul Gentrifying?” focuses specifically on data describing demographics (changes in race and class), changes in housing stock, and changes in the housing market. Institute Director Myron Orfield and his team then ran the numbers for Minneapolis and St. Paul using similarly sized census tract “neighborhood” definitions. And by all accounts (with only one exception, and more on that in a moment), they found that none of these things was happening in the Twin Cities.

For example, take rent. According to the data, core city neighborhoods are simply mirroring changes in the region.

“Rent’s going up regionwide,” Orfield explained to me this week. “If rents are going up [in your neighborhood], you might think it’s a pattern. But the rental market has been fairly tight in general across the entire region. The pattern is really a regional pattern, and [in core city neighborhoods] rents are still less, [and] going up slower than anything else.”

Data is a stubborn thing, and when you include both inflation and the larger regional context into the picture, the report finds that core-city gentrification is largely a myth. 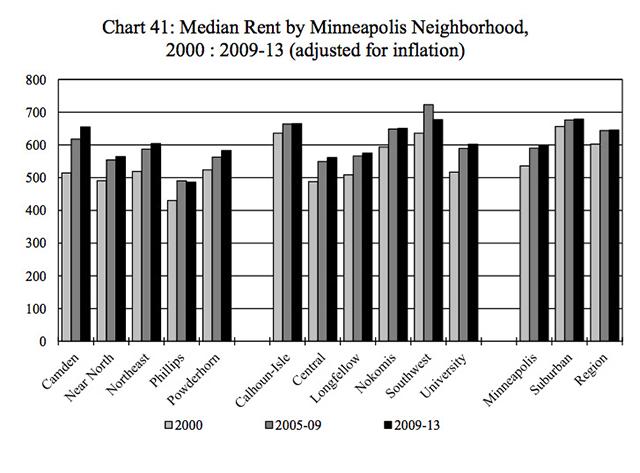 The importance of scale

One of the key differences between Orfield’s look at gentrification and more individual narratives about neighborhood change has to do with scale. On any given block, street, or small-scale neighborhood, the kinds of changes associated with gentrification might be obvious. (Think of Uptown along the Greenway, or the new restaurants in Lowertown.) 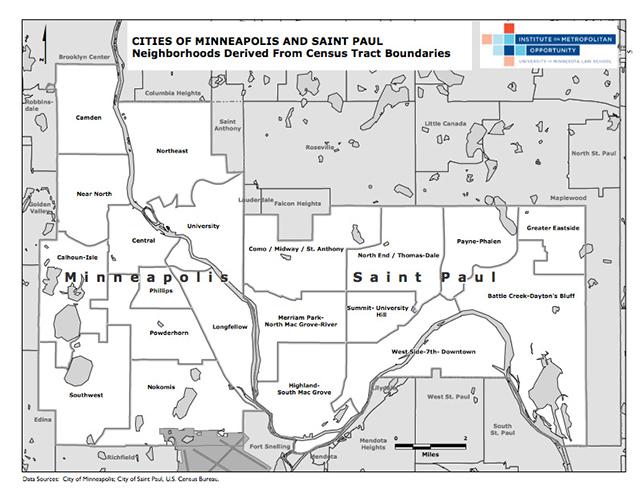 But if you zoom out just a bit and look at the Twin Cities’ urban neighborhoods at a larger spatial and temporal scales, these changes disappear. Over a few years, that shiny, expensive building is offset by declining housing stock elsewhere, and the family of color that moved away is offset by similar newcomers.

“If you cut data fine enough for any given period, some neighborhoods will become a little whiter, and less wealthy,” Thomas Luce, the IMO’s research director, told me. “People tend to say that a store or a development is going to create gentrification, but there’s a constant churn. But zoom out far enough and get past the random noise and economic activity, and you see longer-term patterns.”

For example, the one exception to the report’s (lack of) trends lies in Minneapolis’ Powderhorn neighborhood, which has increased its white population percentage from 45 percent to 51 percent over the last 15 years. (Note that the scale here is slightly different from the usual “neighborhood” definition used by the city’s neighborhood groups; here “Powderhorn” encompasses some of the adjoining neighborhoods.) 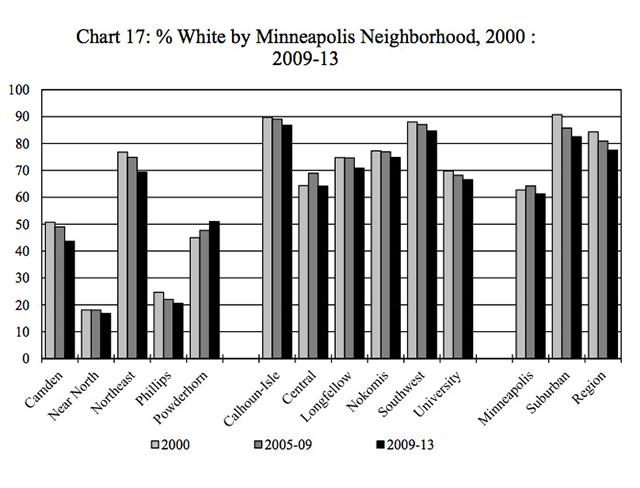 “While most of the neighborhoods were becoming more racially diverse, the Powderhorn neighborhoods became a bit whiter during this period,” Luce explained. “It was 50/50 at the end, but the other indicators — income, housing, and things — were all going the other way [away from gentrification].”

In my experience, the term gentrification is most often used to refer to differences in economic and cultural power between racial groups in historically underprivileged core city areas. It’s a useful way to describe the effect when the vast bulk of new apartments, restaurants and other urban changes that seem aimed at attracting wealthier white markets. Or it can describe how city policies tend to ignore the pernicious racial disparities that remain a huge problem, especially in the Twin Cities. In other words, just because the overall demographics of a neighborhood aren’t changing doesn’t mean that changes that do happen aren’t overwhelmingly focused on wealthier white people.

“Minneapolis is becoming more and more economically polarized,” Orfield told me, “but we’re not doing anything to make it more integrated. Gentrification is used as a justification in city policy documents to keep all affordable housing in neighborhoods that are becoming poorer, a policy driver trying to preserve places from becoming white and rich.”

The other big take-away of the study, from a data perspective, is that neither Minneapolis nor St. Paul have anything on the big coastal areas when it comes to gentrification. Whenever I hear friends in New York or San Francisco describe rising rents or displacement in Manhattan, Brooklyn, or the Mission District, there’s nothing in the Twin Cities that compares. (For example, check out this great blog about displacement of old businesses in New York City.)

Here’s what the report concludes about the Twin Cities’ national context: 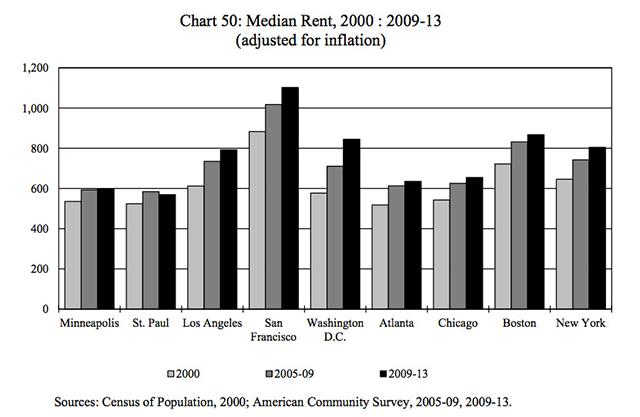 The take-away from these charts is clear: Extreme care must be taken when comparing Minneapolis or St. Paul to cities with prominent gentrification fights, because for most residents, housing is far cheaper to obtain here than in those cities. Relative to these places, the Twin Cities have become more affordable over time.

It’s very important to note that the report does NOT say that gentrification isn’t happening. Rather, the Twin Cities’ gentrifying neighborhoods are the already wealthier white areas, like parts of Southwest Minneapolis. 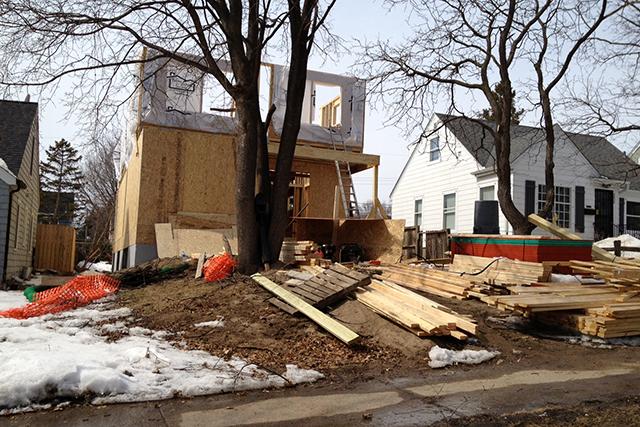 Meanwhile, according to Orfield and his team, the real problem with the Twin Cities’ core neighborhoods isn’t gentrification, but the continuation of decline and social segregation. For example, across town on the East Side of St. Paul, the numbers look grim. According to Orfield, gentrification should be the last of the worries here. 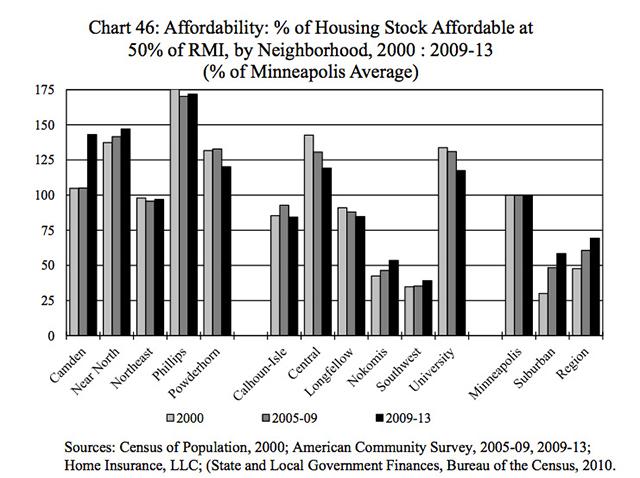 Orfield points to a 2012 survey of low-income housing residents where the main desires were for safer neighborhoods and better schools, outcomes that are not closely tied to debates about gentrification.

Next time you hear people talk about gentrification, be sure to ask a follow-up question. They’re probably, and wholly justifiably, worried about economic or social marginalization. So it might be a good idea find out what they mean by “the G-word,” and begin talking about the real problem.

If Twin Cities gentrification is a myth, what’s the real problem?