If you’re a light rail operator, the final weeks of 2015 were probably disturbing. Within just a few weeks, there were three separate fatal crashes involving a train, ranging from a bicyclist to a wheelchair user to someone crossing a platform. Each one is a unique tragedy.

The spate of fatal accidents remains something of a mystery, spanning both of the Twin Cities’ light rail lines, one of which has been operating continually for over a decade. After all, trains are as predictable as it gets in urban transportation. They’re large, loud and don’t swerve, they meet carefully designed safety standards, and they’re all driven by trained professional drivers. If the Twin Cities can’t keep our light rail systems safe, what hope is there for our chaotic car-choked streets?

First of all, it’s important to note that a) a lot of time and thought goes into light rail station design and safety procedures, and b) depending on context, the safety variables for light rail can be radically different.

Also, would-be riders shouldn’t run across the street to “beat” or catch a train. It’s very dangerous. (I know this firsthand; while chasing the Green Line through downtown Minneapolis I caused my own bike accident.) It’s better to wait for the next train.

That said, the tragic fatalities of 2015 don’t really fit a pattern. The Green Line and Blue Lines are quite different from a safety perspective. The Green Line runs through the middle of University Avenue, a busy main street full of pedestrians, while the Blue Line runs alongside Highway 55 (aka Hiawatha Avenue), a semi-separated urban freeway.

“We start out designing crossings or station areas by working closely with the operations folks and designers who have experience in this arena, to develop as safe crossings as we can,” said Jim Alexander. He is the director of design and engineering for Metro Transit’s Southwest Light Rail, and formerly designed the Green Line stations. “We use the tools we have … signage to get people aware of LRT down the middle of the street, a combination of signals. And trains have bells or horns to use as well, to alert passengers and pedestrians crossing the street.”

Adding to the complexity is jurisdictional overlap. While Metro Transit controls the station areas and operations of vehicles, and budgets for things like gate arm crossings and flashing signs, the surrounding environments and streets are designed by other agencies. For example, the recent attempts to improve the crosswalks along busy Hiawatha (to prevent jaywalking) involved county, city and state agencies. 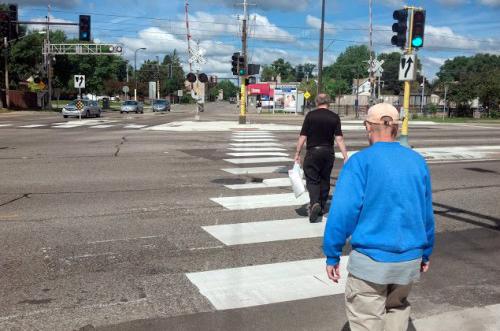 “It’s quite an in-depth process in terms of trying to get all the stakeholders — internal and external — together,” Alexander told me. “We’re really trying to understand and get into the mind of the pedestrian, how they would want to cross the roadway and the tracks.”

In urban design, there’s a lingering tension about how to deal with unpredictability. On one hand you have the law-and-order approach, which argues that clear rules, combined with enforcement and education, will encourage compliance and lead to safer streets.

On the other hand, there’s a more “human-centered” approach where design accommodates and “forgives” errant human behavior. Human-centered design (also called “user-centered design”) is where, as Wikipedia puts it, one tries to design around “how users can, want or need to use the product, rather than forcing users to change their behavior.” The idea cuts broadly across multiple fields, from software design to office ergonomics, but it gets really interesting when you start discussing city streets.

“The key is to design things intentionally that really channel attention and behavior through designing from a human-centered systems design perspective,” Kathleen Harder told me. Harder holds a Ph.D. in cognitive psychology, and directs the Center for Design in Health at the University of Minnesota. 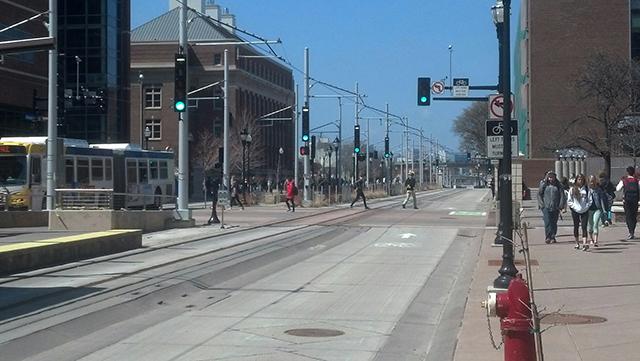 Courtesy of Cameron Conway
The Washington Avenue transit mall is a case study for design details, where signage is almost always ignored.

From this perspective, the problem of light rail safety revolves around passengers having access to information because, as Harder says, people are very goal-oriented. When confronted with an approaching train, and the question of whether they will “make it” if they run across the road, people lose track of other pieces of the urban environment.

“If train riders are intent on reaching a goal, a light-rail or crossing-a-street objective, everything else pales in comparison,” Harder explained. “They will take riskier behaviors if they think not crossing the street will cause them to wait 20 minutes for a next train.”

One way to alleviate this risk might be to make “next train” information even more obvious. If you know you’ll only have to wait 10 instead of 20 minutes, you’re much more likely to be patient. 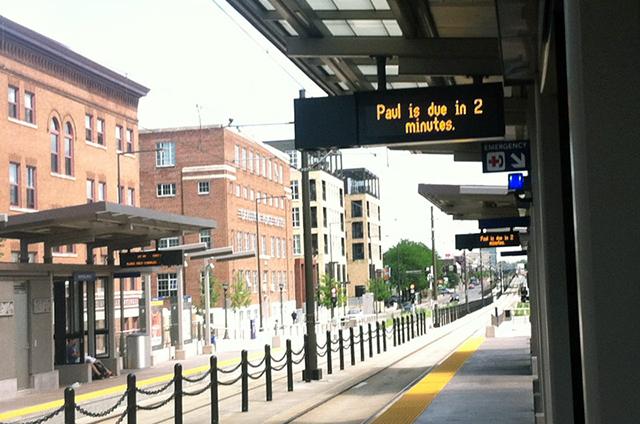 MinnPost photo by Bill Lindeke
One way to alleviate risk might be to make “next train” information more obvious.

Other important variables from a human-behavior perspective include: transit frequency (how long you have to wait for the next train), sightlines, barrier placement, signal timing (e.g. green lights, walk lights), signal priority (does the train stop at intersections), pavement markings and texture, signage and flashing lights, sounds (bells, whistles), sidewalk width and demarcation by street furniture, and the number of conflict points in the area.

Safety and the ‘cognitive load’

One key variable for street safety is the concept of the “cognitive load,” or the amount of attention that people are able to devote to processing their surrounding environment. Especially in an area of high complexity, like the corner of University and Snelling, home to one of the Green Line’s busiest stations, the amount of information can be overwhelming.

“What causes people to decide to cross or not depends on what cognitive zone they find themselves in,” Harder explained. “Are they distracted? Cognitively engaged in the environment? Or is their mind somewhere else attending to a piece of music? Where are they in terms of visual orientation? All these variables form a complex delicate balance.”

At Snelling, this might involve devoting more attention to sidewalk or street design, reducing the “decision points” and “actions” grabbing people’s attention. For example, currently the light rail does not have proper “signal priority” at key corners like this, and its halting progress through the intersection increases the uncertainty for drivers and transit riders alike. (Is it going to stop? How many extra seconds do I have to reach the train?)

“Some information isn’t presented in a cognitively digestible way,” Harder told me, speaking more generally about street design. “Some signs aren’t at appropriate heights, or what information they need, they don’t know, such as when the next train is coming. But if it is designed in such a way that attention is channeled, so that people can use the information readily, the probability of an error is reduced, because there aren’t so many variables in the fray.”

Another big lesson for urban design and safety is that there are diminishing returns to signage. For example, when Hennepin County attempted to make one lane of a downtown street into a “bus-bike-only” lane, no matter how many signs they installed, drivers didn’t follow the rules. There are stark limits to what signs can accomplish.

“Signs are not for people who know where they’re going,” Harder told me. “A sign isn’t going to grab your attention in an area where you really need to be captured. That’s why signs need to be designed in a very effective and judicious way.”

Harder recommends what she calls “deep design” instead of signage. The built environment should have easy cues that let people know when it changes. This can be done with architecture, street furniture, different types of pavement; for example, Harder points to the intersection of Church Street and Washington Avenue (on the Green Line at the University of Minnesota campus) as a place that needs more design detail, particularly on the ground where many eyes tend to fall.

“Different kinds of pavement, and even that has to be smartly,” Harder told me. “Deep design is not something you just splash on and say “we’re done.” You have to think about variables, the context, about the flow. You’ve got to be systematic and keep eye on the goal.”

A related design factor is the usefulness of educational campaigns: for example, fliers for university students, billboards or announcements for drivers or transit riders. But if you pay attention to human psychology, you find that design cues can easily trump a public-service announcement.

“People often say, ‘Why don’t we just teach people that they have to wait to cross the street,” Harder told me. “That’s all fine and good, but [a transit rider’s] goal is not to have to wait 20 minutes for the next train. Telling them to wait to cross the street is not going to percolate into the conscious awareness, because it’s more important to reach the train. It’s better to use design to give people the information they need.”

Solving the sticky and tragic problem of street safety isn’t easy, and with the increasing influence of distracting technology in our everyday lives (for drivers and pedestrians like), is only going to become more important. If 10 years of public-service announcements haven’t made light rail safe, what will?

The psychology of light rail safety