People, especially Finns, have long maintained that saunas hold secrets to wintertime sanity. But when you combine a sauna with a bit of public orientation, you achieve another level of liberation from seasonal doldrums. Though it might seem odd to some, the art of the public sauna is thriving in the Twin Cities, and offers an ideal way to overcome both domestic isolation and the affect of darkness.

At its most basic level, the idea of the sauna is absurd. You squeeze into a small, very hot room until you can’t take it any more, and then emerge steaming into the wintry air until you can’t take that anymore, and then repeat the process. The sauna also challenges some of our basic Minnesota Lutheran tendencies to retreat from intimacy and exposed skin. I’d wager that some folks — I’m thinking of my prairie grandmother — might find saunas inherently improper.

“When I moved here from California, that first winter I was bracing myself,” Molly Reichert, who designs mobile saunas, told me. “But what struck me in Minnesota is how everyone retreats and goes into hibernation mode.”

In response, Reichert, (along with artist and architecture collaborators John Kim, Emily Stover, John Moore, Daniel Dean, and Andrea Johnson) is responsible for two “mobile saunas” that have been popping up around the Twin Cities for the last few years. The first iteration — a converted aluminum trailer called TönöSauna — was built for the 2012 Art Shanty Projects, a semi-annual frozen lake / ice house art project.

“That was a retrofit 1967 Avion travel trailer,” Reichert told me.”Because it was very old, the trailer structure wasn’t really designed to withstand temperature differentials of 200 degrees.”

Since then, Reichert and an architect partner, Andrea Johnson, have constructed an improved mobile sauna that they’ve taken to various places around the Twin Cities, starting with a placemaking effort launched in the Bloomington’s South Loop, by the Mall of America.

“The big box landscape was an incredible place for the sauna to be born,” Reichert told me. (The team named the new sauna “Little Box Sauna” to accentuate the contrast.) “We really wanted to bring the scale down to where people can connect — saunaing in places that typically are just about consumption, or moving to and from areas of consumption to your car.” 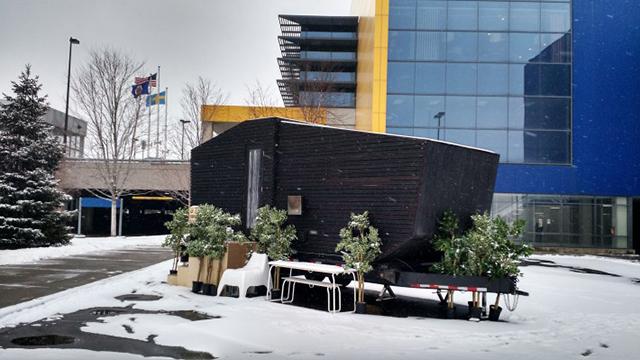 Courtesy of Molly Reichert
“The big box landscape was an incredible place for the sauna to be born.”

The idea of a parking-lot sauna is odd because when most people think of saunas they imagine woodsy backyards. (These are quite common in places with a lot of Finnish heritage; for example, sauna culture thrives up on Minnesota’s Iron Range.)

“Well, I’m Finnish and grew up with saunas,” Connie Kauppi told me this week. A year or so ago, Kauppi finally realized her dream of building a backyard sauna in her home on St. Paul’s West Side.

“It’s really great, the best thing I’ve ever done,” Kauppi said. “The community aspect starts with building it. What I like about living in a blue-collar neighborhood is that there’s so much expertise on this sort of stuff. Everyone has tools, and lots of people even have material.” 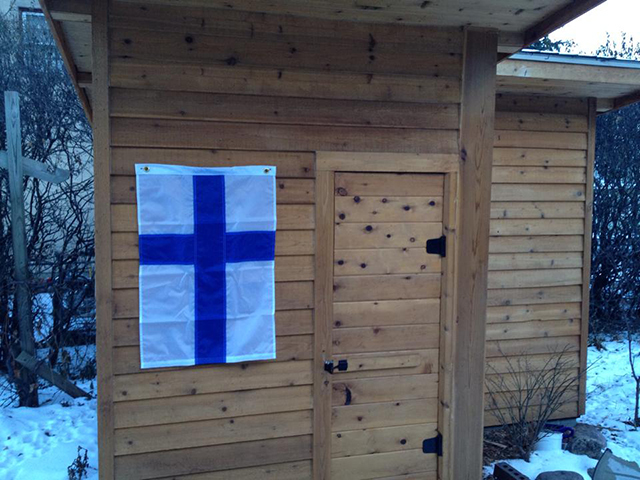 Courtesy of Connie Kauppi
Many of the materials and services to help build Kauppi’s sauna — half of the studs, truck deliveries, and tar paper — were donated by handy neighbors.

This winter, she’s started a monthly tradition of inviting her neighbors over to enjoy the fruits of their collective labor. Kauppi doesn’t tell people what to do, or how to enjoy it. She insists that the sauna work its magic in its own way.

“When I talk about it, I don’t go deep,” Kauppi said. “People have their own experience at the end of the day. People get out of it what they get out of it, and I don’t like to prompt them. It’s a primal thing with humanity throughout the world, the practice of communal bathing in the hot spring or the river or the beach. Bathing can have layers of meaning.”

Stopping by the Nicollet Mall sauna on a snowy evening

The most recent resting place for the Little Box Sauna was the plaza of the Westminster Presbyterian Church, on the South end of Downtown Minneapolis’ Nicollet Mall. I stopped by there on its final day in December to try it out.

To step into the sauna in the middle of downtown is magical and weird. I often picture saunas in Arctic forests, amidst pine trees and Scandinavian moonlight, so to find one amidst a cluster of downtown high rises is striking.

“It’s kind of good for me because I have kind of a couple tension balls in the air,” a middle-aged sauna escapee named Mark explained to me. “My apartment is doing a renovation, and we have to temporarily move back the day before Christmas. That’s one of the nice things about living downtown. On a Saturday morning there could be a parade, or you’re drinking coffee near the pub, or you can go to the gym, or to church here for an interfaith service.”

For the Nicollet Mall project, Reichert and her partners booked sauna guests into 90-minute slots. For the proper sauna effect, she recommends four in-and-out trips, alternating between the hot room and the winter air. While waiting, people linger by a wood fire, some drinking water or chatting. Passers-by often glance or gawk, and very occasionally, someone will be persuaded to try out the sauna for themselves.

“A lot of people are hesitant to have this experience in a public way, especially Minnesotans,” Reichert told me. “But what happens is that inevitably people connect in the sauna, I think, because it’s this environment where your defenses are down.”

(Personally, I have to agree. I’ve been in one of the mobile saunas four separate times, and often with complete strangers. It’s amazing how the heat, quietude and relative intimacy can be conducive to conversations that would never happen in any other setting. For example, when’s the last time you had a good chat in an elevator?)

“It’s not ever weird,” Reichert proclaimed. “People think it’ll be this skeezy experience, to be exposed in front of one another. But it’s just never like that. It’s always friendly, wholesome, community-oriented, and safe and you just get put into a different head space.”

A Minnesota winter is hard on the soul, the more so because, for months at a time, few of us spend much time outside. Being cooped up indoors has corrosive effects on one’s social life, which is why, for many people, winter can be a depressing slog, watching TV in the house and waiting for the release of spring.

“We’re both from Ely, and we have a sauna on the lake in the woods, but this is a much different experience because we’re surrounded by buildings and people on the street walking by,” Shelby and Kenzie told me as they emerged, steaming, last weekend. “It makes it interesting, a different ambience. It’s a little more stimulating, less sleepy.”

The already surreal experience of the sauna is multiplied by the odd proximity: standing in a swimsuit, towel around your shoulders and skin steaming in the winter air, in an Ikea parking lot or on a downtown street corner. The gap between the intimacy of the hot room and the public space of the street couldn’t loom wider, and the public sauna offers a double liberation from cramped Minnesota winters.

The next stop for the nimble Little Box Sauna is down at Fort Snelling State Park, part of an Jan. 9 event called “4play” aimed at introducing more Minnesotans to outdoor winter activities. It’s hard to imagine a better way to bolster your winter skin.