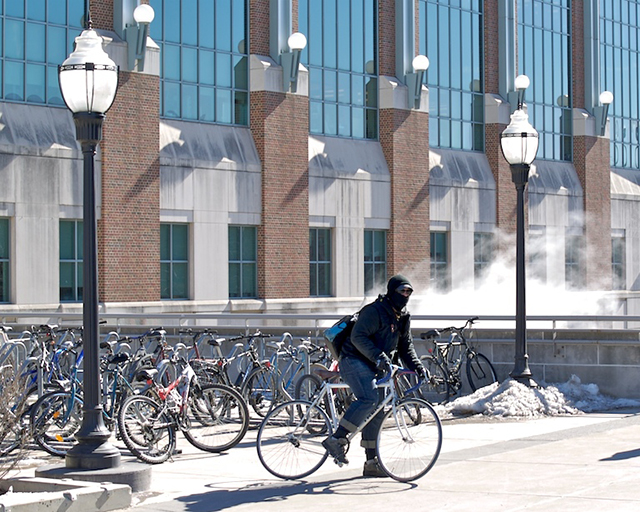 CC/Flickr/puppethead
Winter bicycling is not as crazy as it sounds.

There are not many things you can do in Minneapolis that seem crazier than riding your bicycle in a Minnesota winter. It conjures up images of beards covered in ice, a lonely bundled figure mounted on a thin metal machine sloshing through snow and over ice on the margins of the road, not a trace of bare skin, and only puffs of warm breath emerging from between the goggles and jacket. From the perspective of most car drivers, crouched over their dashboard heaters, the very idea is unimaginable.

But winter bicycling is not as crazy as it sounds, and might be a litmus test for sustainable cities and active living. Next week (Feb. 2-4), Minneapolis and St. Paul will host the fourth Winter Cycling Congress, an annual conference devoted to promoting and educating decision-makers about the unique challenges of winter bicycling. It’s the first time the conference has been held in the United States; Minneapolis and St. Paul will soon become case studies for how to make progress toward increasing winter cycling. (See schedule of events here; same-day registration is allowed.)

For an American city, Minneapolis has a decent bicycling mode share (defined as the percentage of people who make their transportation trips by bicycle). At least, it does during the summer. But bicycling generally tracks fairly closely to weather. Courtesy of Michael Altman
This chart compares Nice Ride bikeshare ridership to the high temperature on a given day; higher temperatures are clearly associated with higher bike ridership, at least as Nice Ride users are concerned.

“You get used to it,” JJ Kahle, who rides 6 miles each way to teach at a Minneapolis high school all winter long, told me. “It’s a routine. Everyone has the things that work for them, and for me, I carry my work clothing to school. Every day involves me dressing after the ride, changing into school clothes, sometimes commuting to another campus 10 miles away and then riding home. I use a pretty big backpack.”

The challenges of winter bicycling depend on whom you talk to. For Kahle, good quality lights are crucial, because of the extra darkness and wintertime visibility issues. The other advice was to “really watch the weather,” and make sure to know about upcoming precipitation or temperature changes.

“Basically there are two different variables, what you’re wearing into work vs. what you carry into work,” Holly Santiago, who commutes about 4 miles to work in a business professional environment, told me. “Getting there with enough time to get changed and freshen up is important. In my work environment, I don’t have a big space to change or store things, so I try and wear [flexible] clothes, like a couple pairs of long johns over my tights, and then put on a business outfit that’s easy to change.”

Santiago also changes her commuting routes from summer to winter; because of the packed snow, side streets become places for “slow, cautious riding.” And in winter, reliably cleared-off trails like the Midtown Greenway or the Cedar Lake Trail become even more important. 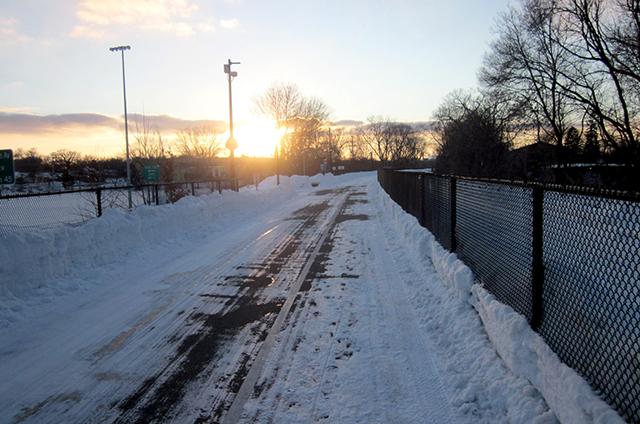 MinnPost photo by Bill Lindeke
The Midtown Greenway in the wintertime, a reliable route for winter riders.

(Both Kahle and Santiago are members of Grease Rag, a Minneapolis-based bicycle group that focuses on women/trans/femme cyclists, with the goal of changing bicycling assumptions and conversations that too often focus on male cisgender riders.)

The story of the WCC

The Winter Cycling Conference got its start in Finland, where the small city of Oulu had become something of a winter bicycling mecca. Compared to most cold weather cities, in Oulu the winter mode share remained quite high, almost 25 percent.

“The first [conference] was held was three years ago in Oulu, the world capital of winter biking,” Tony Desnick, a bike advocate and one of the conference’s main organizers, told me. “The purpose is for designers, policy-makers, planners, and advocates to come together and share best practices about how to normalize winter biking.”

After the conference moved to Winnipeg, Canada, in 2014, Desnick and a group of other advocates put together a bid for a Minneapolis conference. The bid included support from both Twin Cities’ mayors, local businesses, bike groups like the Bike Alliance of Minnesota, and some crucial funding support.

According to Janelle Waldock, the vice president of community health and health equity for BlueCross and BlueShield of Minnesota, the conference lined up perfectly with their mission.

“One of our goals is to make bicycling more inclusive for everyone, and we recognize that our climate plays a role in that. We know there are creative strategies to enable people to be able to still bike in the more snowy months,” Waldock told me.

Why do we need a separate conference for winter?

There are already a bunch of bicycling conferences all over the country focusing on bike planning, bike infrastructure, bike sales and bike advocacy. So why do we need a special conference focused on bikes in the wintertime?

“Weather is a major barrier for people biking,” Annie Van Cleve explained to me. Van Cleve, along with Desnick, is one of the two advocates who’s been organizing next week’s three-day event.

“It’s something we do for fun for half the year, but that makes it much harder to legitimize bicycling as a form of transportation. So this conference has a strong focus on transportation. At same time it acknowledges that recreation is a really strong part of our tradition here and reason people still ride bikes,” Van Cleve explained. 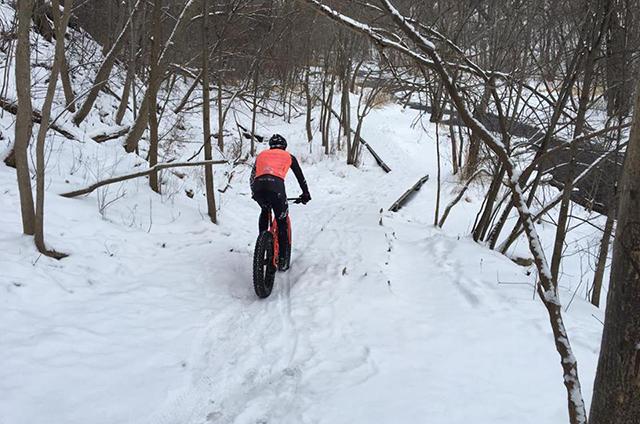 Photo by Aaron Thomas Smith
Fat bikes have become a hot recreational activity in the wintertime.

She points to fat biking as an example of the growing recreational winter biking trend, but maintains that the key is focusing on the bicycle’s transportation potential.

There are other variables, too: how maintenance and equipment considerations change relative to snow and less predictable cars. A good general rule of thumb: If you design bike infrastructure that works well in winter, it’ll work even better during the rest of the year.

“If you need protection, it becomes more important in winter,” Van Cleve told me. “Safety has to be at a higher level; if we plan for the winter, it means we also benefit for the summer.”

One of the big challenges for winter bicycling is maintenance. Just as with snow plowing for cars, trying to figure out ways to deal with accumulating snow and ice is a huge challenge.

Van Cleve and Desnick both told me about how maintenance — plowing, de-icing, communication — are going to be a special emphasis of the conference.

“We need a priority clearance network,” Van Cleve told me, “certain routes that people can depend on. We should design infrastructure so there’s room for snow storage. And for the actual practice of maintenance itself, people from Scandinavian countries are going to be here talking about techniques.” 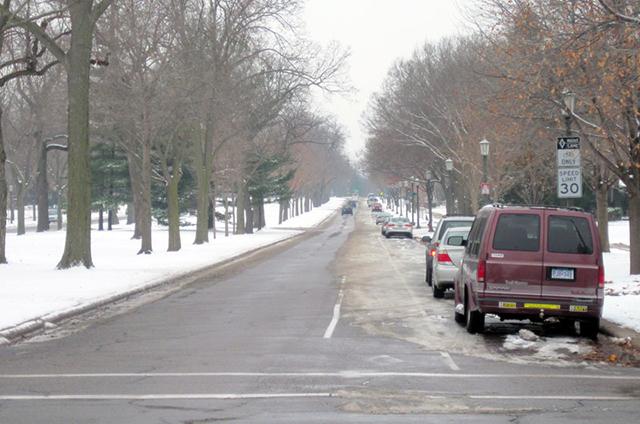 Desnick points to research he has done via his bicycling website Minneapolize, suggesting that maintenance is a huge problem for accessibility. 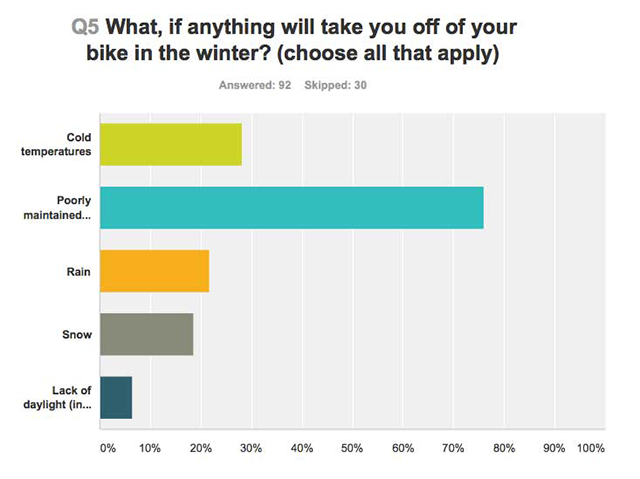 Courtesy of Minneapolize
Maintenance is a huge problem for bicycling accessibility.

The cure for winter ennui

For many Minnesotans, winter is a depressing slog. The skyways, malls and domed stadiums for which the Twin Cities are justifiably famous reflect a collective desire to escape its grasp, to stroll unencumbered by the trappings of down jackets and warm woolen mittens. But winter bicycling represents a 180-degree departure from that technological transcendence. Instead of retreating from the cold climate, you tackle it head-on, and the reward seems almost magical.

“It’s completely part of my mental health,” JJ Kahle told me, describing the joys of winter bicycling. “To be outside, even though I’m not in sunshine very much, it’s just so beautiful and so quiet. I really think it’s a huge part of staying healthy and happy during this time of year.”

And just as Inuit people (allegedly) have many words for snow, winter bicyclists develop a new appreciation for the infinite varieties of wintry mix and winter sunlight that create our seasonal northern landscape.

“In winter, there’s no standard that anyone is judging you by,” Holly Santiago told me. “You can bicycle in December on clear roads or you can bicycle in 6 inches of snow in March. The best thing is that you don’t look at winter as ‘just cold.’ You observe and appreciate its variances, when it warms up by 10 degrees, or you’re out in a snowfall and it’s beautiful. Or in the morning, you start to hear different bird calls, and realize that the seasons’ are changing. Winter biking: Every day is different.”