I was lucky enough to travel to Scandinavia a year or two ago, and got to experience the wonders of walking on lovely sidewalks. Many European cities pave their sidewalks in complex patterns formed by smaller tiles of concrete, brick or stone. If you stop to notice the textures underfoot on historical streets, it makes strolling those cities delightful.

But in the U.S., it’s a different story. Last week the designers of the new Nicollet Mall, downtown Minneapolis’ premier pedestrian shopping street, cut costs for the reconstruction project after contracting bids came in over budget. The No. 1 item on the chopping block was the “intricate brick-like pavers,” a fundamental part of the original design. Instead the architects, James Corner Field Operations, have recommended using poured concrete.

The changes are enough to give any well-traveled Minneapolitan a serious case of sidewalk envy, leaving them asking, “Why can’t we have nice things?”

Slide the white bar (located on the right side of the image) to reveal the new, poured-concrete design rendering of Nicollet Mall. For more such comparisons, see “Can you tell the difference between the new and old Nicollet Mall redesigns?” 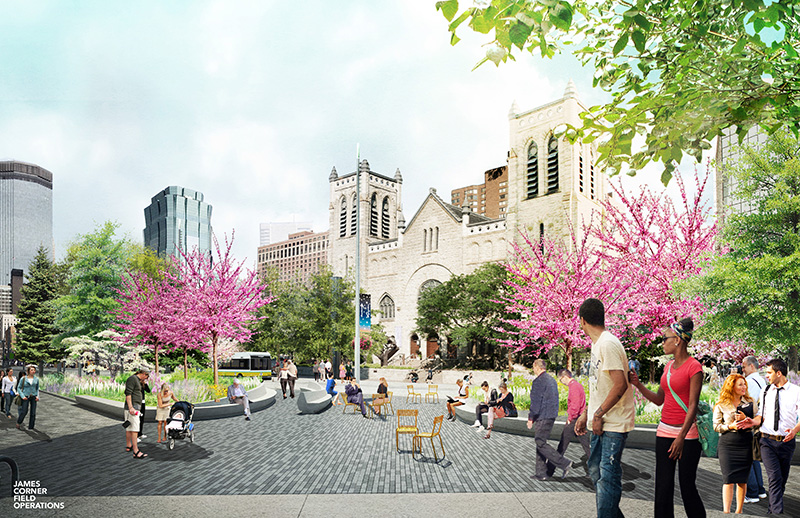 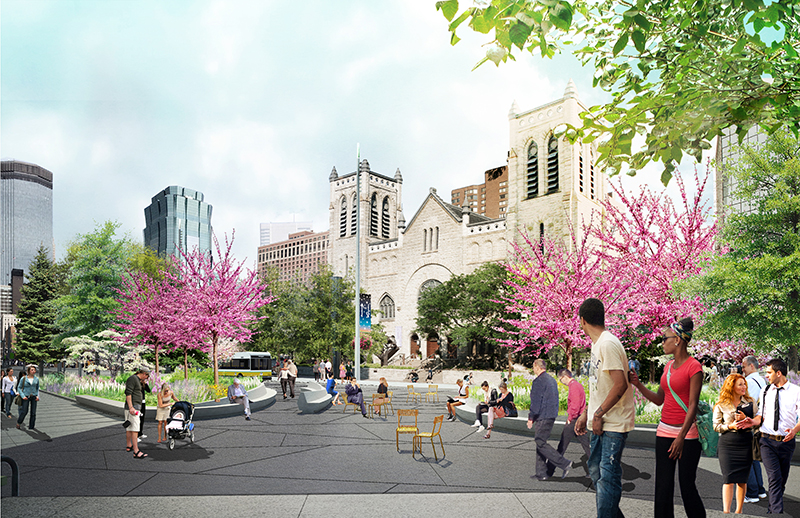 But do pavers really make a difference for a city street, or are they superficial? The answer is surprisingly complicated.

If you’ll pardon the pun, the story of street paving has a rocky beginning. Though urban sidewalks existed as early as Roman times, even in the late 19th century most American cities were an uneven affair of cobbled together surfaces. As historian Clay McShane outlines in his book, "Down the Asphalt Path" (easily the most exciting book about street paving available), street paving was left to the individual property owners. A dry goods warehouse might pave its adjacent street with granite to accommodate heavy wagons, for example, or a group of property owners might pool their money and pave their street to boost property values. But most city streets were simple dirt, with some wood slats if you were lucky. Especially in working class neighborhoods, it was muddy.

Paving emerged alongside the bicycle, and early bicyclists began advocating for “good roads.” Once the automobile appeared, paving accelerated to become a fundamental job of urban government. Streets were widened, sidewalks were trimmed, and uniform pavement was constructed nearly everywhere as today’s demarcations of the public right-of-way created the modern streetscape.

Sidewalks, in particular, became a part of the municipal obligation. The first concrete street in the U.S. was in Bellefontaine, Ohio, in 1891, and by the 20th century, concrete sidewalks were a key piece of the urban puzzle. Today, you’ll find concrete sidewalks along the street grids of the urban core, while suburban arterial-and-cul-de-sac cities typically opt for less expensive asphalt side paths (again, if you’re lucky). These days, in places where walking remains a relevant activity, sidewalks have become more standardized since the Americans With Disabilities Act reforms.

That said, in some cities you can still find the old-school privatized approach to sidewalks. For example, the privately owned sidewalk surfaces of the Las Vegas “strip” are a piecemeal kaleidoscope of surfaces, running into and out of casinos and over property lines. The cobbled-together sidewalks of New Orleans offer a bewildering variety of paving materials, everything from all shapes of bricks down to absolutely nothing. 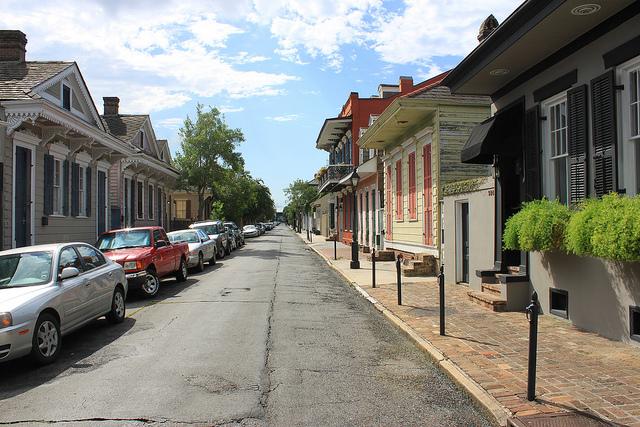 But especially in winter cities like Minneapolis, pavers can pose problems. Some surfaces, especially granite, can be quite slippery when wet, and the freeze-thaw winter cycle often erodes their continuity over time.

“Pavers are definitely high maintenance for us,” Dan Haak, the assistant city engineer for Saint Paul Public Works, told me. “The issue is salt. Over time the freeze/thaw with salt starts to break them down.”

Haak explained that the city uses two main types of pavers: clay bricks and concrete pavers. Concrete tends to erode after a few winters, but brick pavers can also be difficult to maintain, especially if used as a road surface. For example, Fifth Street abutting Rice Park has deep ruts, and the brick crosswalks on Lexington Parkway are often repaired with simple asphalt patches. 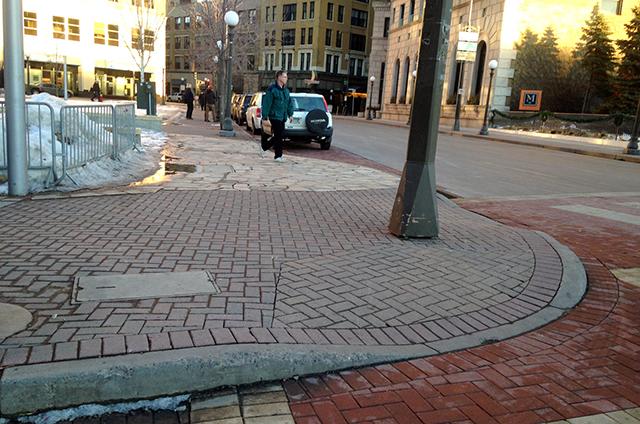 “You gotta remember we did that around 1987 on Lexington Parkway,” Haak told me when I asked him about Lexington's brick crosswalks. “The design for those was a concrete trough to support those bricks, and drain holes in the concrete. With salt application, and the freeze-thaw cycle, and the fact that those bricks were manufactured 30 years ago, they deteriorated. But thirty years isn’t too bad.”

Even when you build them, pavers can sometimes be more trouble than they’re worth. When the Highland Business Association (HBA) rebuilt their sidewalks a year ago (along with about $1 million of city money), they chose not to replace the decorative brick pavers.

“There were a couple problems with the old pavers,” Tia Anderson, a board member of the Highland District Council, told me this week. “The bricks were laid in a cement trough, so then the water would come in and it would get under them and pop the pavers out. It was a poor design 25 years ago, so when we redid our sidewalks for the sake of cost effectiveness we just did stamped concrete on the majority of the sidewalk."

Anderson did point out that 25 years is a pretty good life span for pavers, but for much of that time people in the neighborhood often grumbled about the slippery and uneven bricks.

“I really like the new sidewalks,” Anderson said. “We originally wanted to do a colored concrete. It wasn’t any more expensive, but our concern was that was the city might come back in with regular concrete, and it’d be chipped. After a few years, it would look like a checker box.” 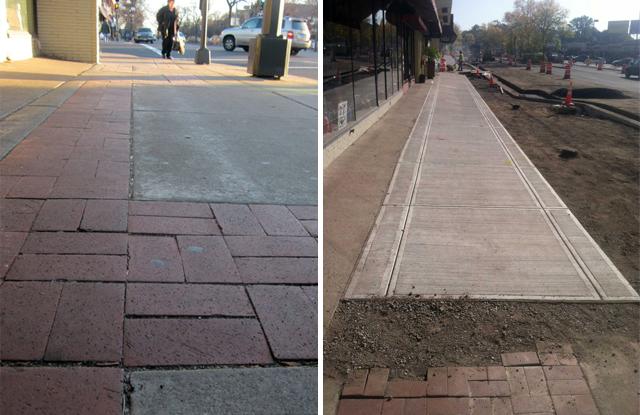 The new sidewalks do have some permeable pavers around the newly planted street trees (a city requirement), but these days most of the sidewalks along Ford Parkway and Cleveland Avenue are simple gray concrete.

So if pavers are so difficult to maintain, why would Minneapolis want to spend millions of dollars on intricate bricks in the first place?

The answer is all about walkability, the idea that sidewalks are only as useful as the urban environments that surround them. In that light, the redesign of the mall reflects the changing goals of Minneapolis’ downtown interests, to create a “consistently compelling urban experience” on the street level to attract people out of the frustrating office skyways.

Yet while pavers can be part of the walkability puzzle, they’re not everything. For example, they cannot dramatically affect a street’s walkability without changes to the surrounding city.

“The materials used in streetscapes are less important than the configurations,” Jeff Speck wrote to me this week. Speck is the author of "Walkable City" (which I highly recommend), which boils down the psychology and principles of urban design into a few key steps.

“Certainly, brick or cobble helps calm traffic if it is used in the street,” Speck said. “But brick sidewalks, while lovely, are not key to encouraging pedestrian activity. What matters is the number and width of lanes, the presence of opposing flow (two-way vs. one-way), curb parking, street trees, and all the other things that cause cars to drive at more reasonable speeds and for pedestrians to be protected from them.”