You hear the question a dozen times a week, as clerks perform their ritualistic exchange. The placing of objects into the bag is but the cherry on the shopping sundae, a final gesture signifying closure.

But the age-old question about which is better might be ending in Minneapolis, as the City Council prepares to debate a citywide ban on the ubiquitous plastic bags. For proponents, the ban would be a small but firm step toward reducing waste and trash, an attempt to nudge shopping habits in a more sustainable direction. And it attacks the all-too-common enemy, the plastic bag blowing in the wind.

Where do plastic bags come from?

You probably know the famous line from “The Graduate,” where the businessman pulls a young Dustin Hoffman aside at his graduation party, and tells him:

“I want to say one word to you, just one word. Are you listening?”

The Graduate was made in 1967, when plastic was a triumphant sign of progress. And the businessman was right; plastics have formed the future in which we find ourselves.

Here’s the skinny. Almost all the plastic bags you use every day are made from high-density polyethylene (HDPE), a petroleum byproduct that became a revolution when engineers at Phillips Petroleum figured out how to catalyze its efficient production in 1951.

Because petroleum byproducts are so readily available, the great advantage of HDPE plastic bags is their cheap and efficient production. For example, check out a plastic bag factory in action: HDPE is turned into pellets of polyethylene resin that look like tiny beads, which are heated to about 400 degrees to become a film as thin as 2/10,000ths of an inch. The plastic is then cooled and rolled into giant tubes to be marked or colored with alcohol-based ink (e.g. “Have a Nice Day” or “Thank You”/ smiley face). Finally, the bags are heat sealed and cut and delivered in bulk to the store, where they’re handed to you with each purchase.

Much like the great “concrete vs. asphalt” war, the debate between paper and plastic has ups and downs. In comparing “upstream” manufacturing, plastic bags are a clear winner over paper, which requires far more energy to produce.

Downstream, however, the fundamental problem is that plastic bags inevitably escape and gather. HDPE takes something like 1,000 years to biodegrade, and just one factory like the one in the video above can produce 1 billion plastic bags per day. No matter how inconsequential each bag might be, the law of numbers means that tiny plastic bags quickly accumulate into a massive problem.

The case against the plastic bag

“Today, there is more mass of plastic in the oceans than of fish,” said Robin Garwood, the aide for Ward 2 Council Member Cam Gordon, one of the ban’s two co-sponsors. “This is one small step towards doing something about it.”

According to Garwood, there are four big reasons cities should eschew one-time plastic and paper bags: litter, waste prevention, upstream lifecycle (reducing use of energy-intensive paper bags), and recycling.

“Once a plastic bag gets into the environment, it’s always going to be there,” Garwood said. “Very small percentages of plastic bags get recycled, and most end up in garbage burners or landfills. The last issue is that plastic bags mess up the single-sort recycling stream. Recycling facilities have spinning parts that allow paper to fall through, but plastic bags wind around them and have to be cut off by hand.” 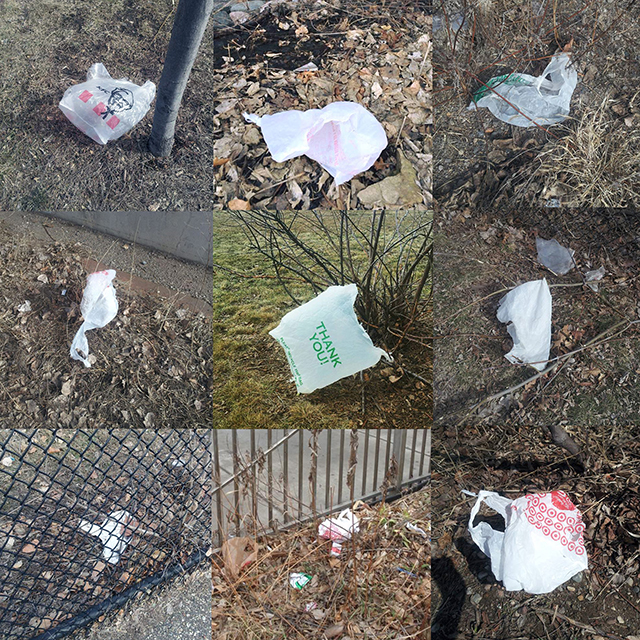 Photos by Robin Garwood
Robin Garwood has been collecting pictures of what he calls “tumblebags” from around Minneapolis streets.

The Minneapolis ban vs. those in other cities

“We researched cities of similar size with bans, like Seattle, LA, Chicago, DC, and Portland,” Anna Abruzzese, who chairs the CEAC, told me. “All have slightly different models. The underlying goal is to reduce waste.”

Different cities’ tactics include everything from outright bans to paper bag fees to “bill credits” for people who bring their own bags. Minneapolis’ proposal would ban plastic bags outright (with exceptions for produce, takeout, newspapers, or small hardware items like screws), and introduce a 10-cent fee on paper bags. The idea is to incentivize shopkeepers and consumers to use and re-use more durable bags (e.g. canvas, thicker plastic, etc.), solving the bag problem at its source, the check-out counter.

“Psychologically a fee is more effective than a bonus,” Abruzzese explained. “It’s a quirk of human nature that’s fees are more incentivizing. And because businesses keep the fee, and it’s not just another tax, we’re hoping it helps businesses see an advantage to shifting perspective on this.”

Abruzzese lived in Washington, D.C., when it banned plastic bags in 2009, and as she describes it, once people get used to the new system, it becomes second nature. She suggests businesses or groups sponsor bag giveaways (branded reusable bags instead of water bottles), and that people keep reusable bags in convenient places like their cars or kitchens.

“You have to wash the bags every now and again, especially if anything leaks,” Abruzzese told me. “It’s a little bit of a transition, but once you get used to the habit of it, you’ll be surprised how easy it is to do.”

That said, similar bans by hundreds of cities, and a handful of countries (e.g. China) have prompted pushback from free-market and industry groups. For example, with millions of dollars of help from the American Progressive Bag Alliance, California’s proposed state-wide ban is going to be on the 2016 ballot, and next-door Wisconsin is proposing a state-wide ban on bans of plastic bags. (Yes, you read that correctly: a plastic bag ban.)

Tumblebags blowing in the wind

For almost a year now, there’s been a plastic bag in the tree across the street from my apartment. It’s almost invisible, hanging there like sleep in the corner of your eye. But every once in a while I notice it again, just one bag in one tree on one city street, and it makes me wonder: For every “tumblebag” that gets noticed, how many hundreds more are out there in sewers or rivers or strewn across empty lots?

There’s a public hearing March 21 (1:30 p.m., Room 317, Minneapolis City Hall) where members of the public are invited to weigh in on the plastic bag proposal.

Meanwhile, I don’t think the bag in my neighbor’s tree is ever coming down. No fire fighter will climb 100 feet to remove a cheap plastic bag, and there’ll be no benevolent litter-fighting squirrel. If a season’s worth of budding leaves, wind and rain haven’t dislodged it, I don’t know what will.