As teenagers on a trip to London, my brother and I discovered the joy of running amid the pigeons that peopled English squares. The birds flapped and flew around us in an endless game, the perfect pastime for a 15-year-old boy.

Yet today urban pigeons get little love. When I asked a birder friend about them, she scoffed. “Nobody cares about them, they’re too common.”

Behind the mundane gray facade, pigeons are secretly fascinating. Until a century ago, pigeons were almost revered. Today they continue to present a paradoxical link with our past, a living example of how nature and culture come to terms in our cities.

A brief history of urban pigeons

The urban pigeon’s proper name is the “rock dove,” Columba livia, one of many dove species that, elsewhere on the evolutionary tree, hold a sacred place in cultural symbology. Wild examples still persist on cliffs in Scotland and around the Mediterranean, though compared to their feral or domesticated brethren, these are rare birds indeed.

By contrast, the urban pigeons cooing in the alley are feral descendants of the domesticated rock dove, one of the first birds to become part of the human assemblage. (For comparison, dogs were first domesticated 10,000 years ago; at around 7,000 years, pigeons are contemporaneous with domesticated chickens.) At the time, people bred them largely for food; when eaten they are called squab.

Less than a century ago, gathering squab was still a practice in Minneapolis. In “Let Me Be Frank,” Frank Rog’s delightfully hair-raising memoir of growing up on the northeast riverfront in the 1920s, Rog describes how he and his friends would climb on river bridges to collect pigeons for local butchers.

“Much of our free time in the summer was spent capturing squab to sell for profit, two for twenty-five cents, and later two for thirty cents. We sold them at the market in downtown Minneapolis, at Schwartz Meat Market, and later at the Mun High restaurant, where they used them for chow mein. Lots of interesting things happened to us while we were capturing pigeons.”

Apart from being eaten as squab, the other great pigeon feature was their habit of finding their way back home, and their peerless navigational acumen. Pigeons would be shipped to various outposts and released with a paper message on their ankle. Though it was a one-way, one-time epistle, the Snapchat of its day, compared to other means of communication the birds were extremely reliable. (That’s one reason pigeons earned so many military medals, as recently as World War II.)

Carrier pigeons have died out with the advent of high-speed communication, but their feral descendants remain a highly intelligent species — for example, they can pass the “mirror test.” After spending thousands of years serving their human captors, urban accommodations for today’s feral flocks seem well earned.

“It’s kind of a dying thing around the U.S.,” Dan Feltenstein, the president of the Twin City Concourse, told me last week. The concourse is a small but committed group of people (mostly men) who raise and race pigeons from backyard coops around the Twin Cities, one of the last local vestiges of the pigeon domestication tradition.

Ever since I first saw Marlon Brando keeping pigeons in “On the Waterfront,” for me old urban landscapes and pigeon coops have been wed together. 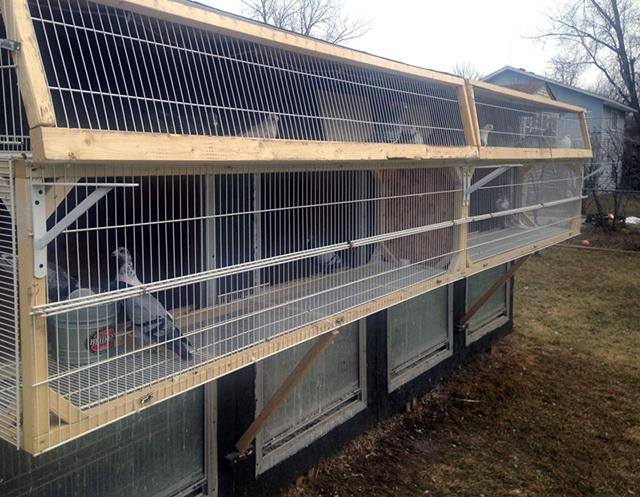 “At first, I figured they were just a street rat type of thing,” Feltenstein told me from his coop, which holds 40 birds (the civic limit in Fridley). “But then I started doing some research and here I am. They take up a lot of time, cleaning, training; if you’re going to race them they’re very sensitive to things. If you stress them out they can get canker or other diseases. They need to be healthy.”

Within the world of domesticated pigeons, there are yet finer distinctions. Males and females are called cocks and hens. There are racers and breeders, and young birds (less than a year of age) and old birds form the two racing categories. Then there are the fancy breeds, like the long-faced muffed tumbler that Feltenstein acquired at a bird swap.

(In a feat of historical poetry, the U.S. pigeon lobby, the American Racing Pigeon Union, has made sure that shipping pigeons by mail remains legal. This is useful for ordering good pedigree birds from overseas, for example, but must also make a sight at the post office.)

Racing itself has its own amazing lexicon and formats. As Feltenstein explained to me, the trick is to train the birds to come through “the trap,” a one-way door in the coop that leads to the food bowl. Once you get the young birds to do this, you can focus on maintaining their conditioning with healthy diets and grooming, and building up their flight athleticism through daily exercise. On race day, the local racing group will hire a driver to take a specially made birding van out into the countryside, laden down with pigeons from members’ coops. Then they “toss them” into the sky and the birds, each fitted with a radio-chipped ankle bracelet, race home at 50 miles per hour.

Because of the pigeon’s image problem, pigeon fanciers are a bit sensitive about maintaining their good reputation. 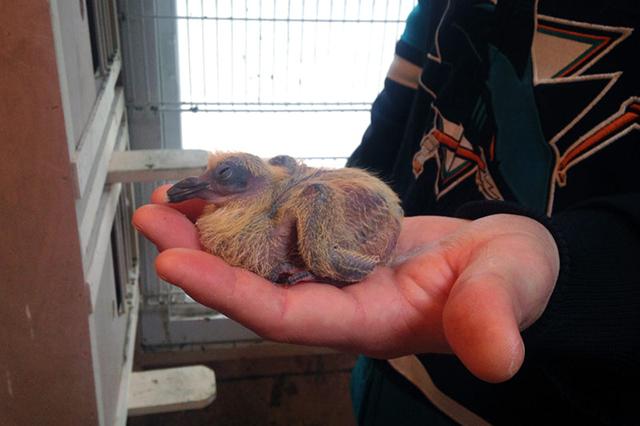 The hawk threat is self-explanatory. Similarly, city councils get worried about neighbors’ concerns, and the perceived threat of disease; Feltenstein maintains that “unless you’re eating their poop,” pigeons do not pose a health threat, and science largely backs him up.

After an introduction to the coop and its various crannies, Feltenstein showed me a training session. He took six of his favorite birds from last year’s team and let them out onto the roof. A few seconds later, they took off into the air over the quiet Fridley street. Watching them fly around, disappear over the rooftops and circle back again in ever wider orbits, was the closest I’ve ever come to feeling like a kite. Mesmerizing and glorious, the image of those birds lifted my spirits for the rest of the week.

“They always beat me home,” Feltenstein told me. “They’re awesome aren’t they? They’ll fly for hours. I’m our here for five to six hours a day in the summer, but a lot of it is just watching them fly.”

Downtown pigeons are another story. Residents and building owners have been trying to cleanse downtowns of pigeons for generations, using everything from spikes to “tanglefoot” (repellent gel).

“As you know, their droppings are very corrosive,” Julie Bauch told me. “When we have areas where they congregate, they can peel the paint right off any surface. That’s just one of the problematic aftermaths of having pigeons around.” 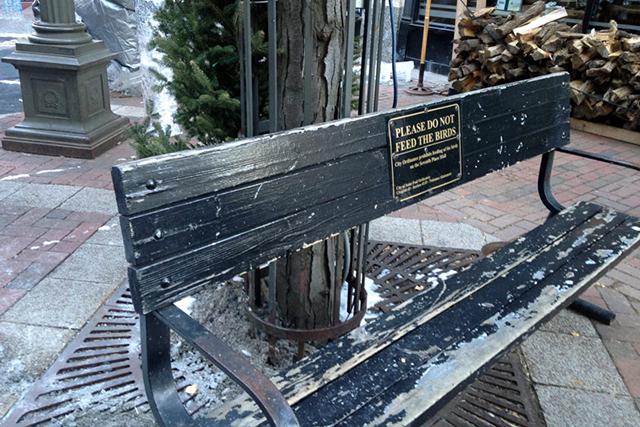 MinnPost photo by Bill Lindeke
Residents and building owners have been trying to cleanse downtowns of pigeons for generations.

Bauch manages some of St. Paul’s historic downtown buildings, dating from the 1920s, and has been waging a spatial war with the birds for almost a decade.

I’ve a theory that pigeons are attracted to certain eras of architecture, that kinds of cornices display a co-evolutionary relationship with flocks of pigeons, and that the modern glass-and-steel rectangle was as much an anti-avian statement as a declaration of form and function.

(For the record, when I asked Dan about what he thought of the pigeons in the downtown park, he said, “they’re wild, they’re not trained. They eat just dirt off the ground, feral, just like feral dogs versus the trained dog that’s your pet.”)

“People have tried for years to figure out how to keep the pigeon population off their areas,” Bauch admitted. “Discouraging them from trying to nest in your locations boils down to spiking, the only thing I know of that has been done, but not what I would call effectively.”

The current state of downtown pigeon control science is a bit counterintuitive. One thing that doesn’t help, Tom Lehrer’s famous song to the contrary, is to poison them. Pigeons can breed (up to five times a year) based on food supply, which is why culling the flock is a short-term solution. Currently, St. Paul uses elaborate birth-control methods that rely on slopes and electric currents to discourage egg-laying. 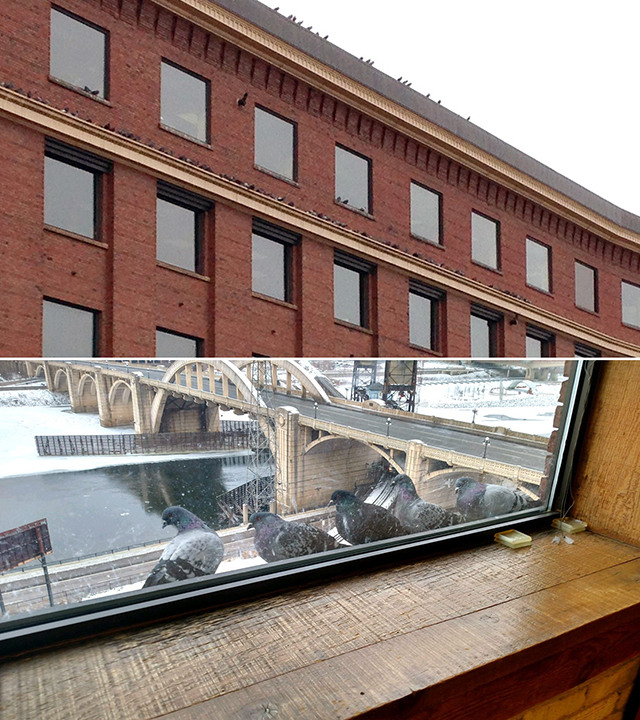 I was walking across the Robert Street bridge a few weeks ago and found myself watching a pigeon flock fly off the ledge of the red brick County Health and Human Services building, overlooking the riverfront. It was a gray day and the flock subtly morphed its way around the power lines, the curve of the bridge’s arch. So much depends on perspective, but to me it was beautiful.