Shelby Kokesch was killed last week trying to cross the street, on her way from the Minnesota History Center to the other side of busy Kellogg Boulevard. As Kokesch and her mother stepped out into traffic, one car stopped to let her pass, following the technicalities of Minnesota’s crosswalk law. But the second car, an SUV, did not.

I’m sure the driver feels horrible; nobody wants to drive into people. But the crash was a classic example of the tragedy of the crosswalk, where safety and laws say one thing, but speed and the street say another.

The death also marks an inauspicious beginning as safety advocates and the St. Paul Police Department launch the city’s most ambitious campaign yet aimed at changing St. Paul’s driving culture. All year long, teams of neighbors and police will conduct stings aimed at shifting the priorities of St. Paul streets, one ticket at a time.

The state crosswalk law states that pedestrians have right-of-way at every corner, marked or unmarked. Yet as I described earlier in this column, the way the crosswalk law works is often counterintuitive to drivers used to having unfettered claim on city asphalt.

“I live on a corner which has no painted crosswalk and it’s really challenging to cross there,” said Kevin Gallatin, a member of the Highland District Council. “Watching literally right outside my window how hard it was for people to cross the street, situations where kids were waiting on the corner and couldn’t get across. No cars were stopping. Kids were there for a minute or two. I’ve stopped what I was doing and walked them across the street.”

Two years ago Gallatin finally did something, and reached out to MnDOT and the state Department of Public Safety, which runs a program called Toward Zero Deaths, aimed at improving safety on Minnesota’s streets and highways. In 2014, Gallatin began organizing a crosswalk campaign in a few places throughout Highland. Lacking the teeth of tickets, the efforts were as much about raising awareness as trying to police behavior. 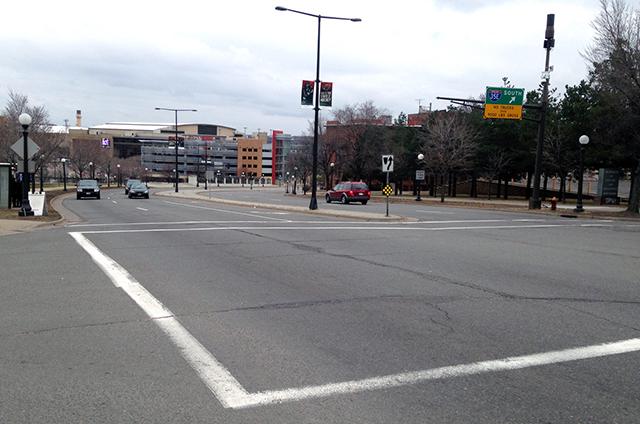 MinnPost photo by Bill Lindeke
This is the crosswalk where Shelby Kokesch was killed, where lanes on Kellogg Blvd narrow from 14′ widths.

“Near churches and schools, tough intersections,” Gallatin explained. “We did three sites in the first year, but we weren’t well covered. We tried to get press, and had a lot of family supporting me. It was successful, but there was no enforcement tied to it.”

Since then, Gallatin’s work has spread around the city. Last year, there were a series of official stings set up during “pedestrian awareness week,” where instead of angry drivers making obscene gestures at the Quixotic advocates, the police calmly explained the law. Still, the approach has clear limits. Few people are stopping at crosswalks, and in many places, it remains all but impossible to cross the street.

“Everybody is distracted,” Gallatin told me. “Drivers are not actively engaged. It’s such a mundane activity. People lock up on the bumper in front of them, and don’t pay much attention.”

This year, things are different because Stop For Me, an offshoot of the nonprofit Saint Paul Smart Trips, is launching a yearlong campaign, spread all throughout the city, to take another stab at changing the culture around the city’s crosswalk law.

Partnering with neighborhood groups, the campaign is holding 32 two-hour crosswalk enforcement sessions in different neighborhoods, where police and safety-conscious neighbors set up stings at particularly difficult corners. According to Kyle Mianulli, the program’s organizer, in one week there have been five events, 529 traffic stops and 129 tickets handed out to St. Paul drivers. Each ticket runs $168. Here is a report [PDF] on the kickoff events on March 17.

Sgt. Jeremy Ellison is the lead liaison for the program from the St. Paul Police Department. According to Ellison, during any event about five police officers, together with a dozen crosswalk advocates, set up operation. Every five or 10 minutes during rush hour an unmarked cop car waits on a side street by a difficult crosswalk ready to pounce. A group of two or three people, some wearing high-visibility vests, approach the street, wave their hands, and step out into the crosswalk. To help with precise legal matters, the police place orange traffic cones exactly 193’ feet from the crosswalk. 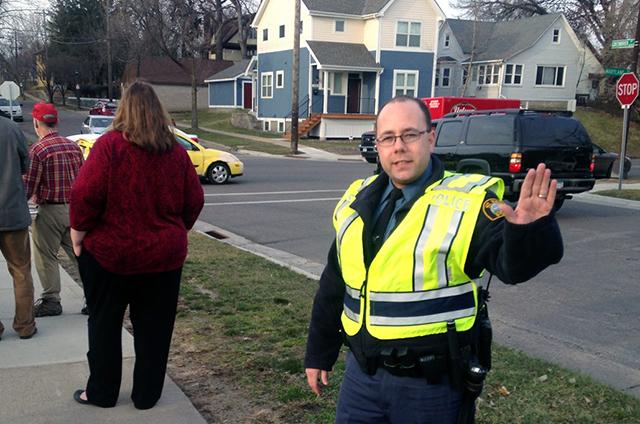 (Two details: The number comes from National Highway Traffic Safety Administration standards based on estimated stopping distance and average speeds. Also, every crosswalk volunteer is trained to be assertive and to make sure their own safety is always a priority.)

Depending on the time and location, between one-tenth and one-fourth of drivers fail to yield to the crossing pedestrians, some of whom become visibly upset by the disregard. But then, in just a few seconds, the police car appears. The watchful “spotting officer” signals by radio, and the squad zooms down the street to pull over the driver.

“Typically, what I’ll do is walk up to the driver and say, ‘Hey do you know why I’m pulling you over today?’ ” Sgt. Ellison told me. “The reason I’m stopping you today is that you failed to yield to the pedestrian in the crosswalk. Then I’ll hand them the pedestrian safety cards, and have a conversation with them about why they didn’t stop. Typically what I’m hearing from people is that ’I didn’t see them.’ Well, why not? Were you distracted by your phone? Why didn’t you see them?”

Watching the sting in action is a bit strange for someone who often walks around St. Paul, like seeing the palpable schadenfreude. At one point, as the orange cop car sped down Maryland Avenue in pursuit of its target, quiet cheers rose up in the air around the gathered onlookers. 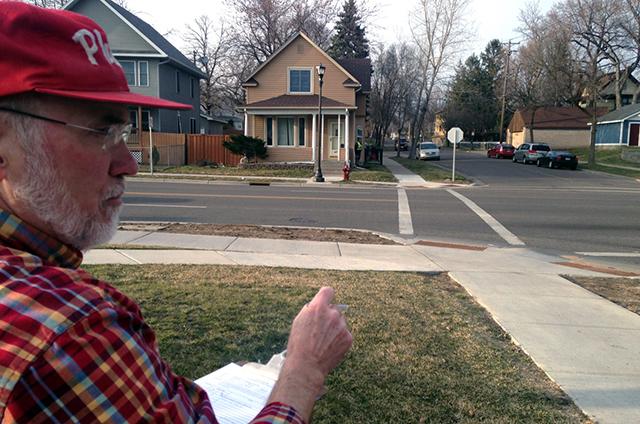 MinnPost photo by Bill Lindeke
East Side resident Stuart Knappmiller tallies driver behavior during a Stop For Me event on Maryland Ave.

Online and in person, the reaction to the sting campaign reveals the gap between people on the inside and outside of the automobile. Negative comments on St. Paul Police Facebook page range from outrage to confusion to guilty confession.

Part of the problem is the inherent inertia of the automobile, how our streets and crowds of cars seem to thrust forward collectively, in ways that have little to do with anyone’s individual choices or decisions.

“What is it that compels drivers? Lot of ways to answer that question,” Lars Christiansen told me this week, when I asked him about the crosswalk sting campaign. Christiansen teaches sociology at Augsburg College in Minneapolis and has spent the last year doing research for a book about the relationship between the body, transportation technologies, and social conventions.

Christiansen calls our current expectations “motordom” — the idea that drivers and cars have the default right of way on the street — and argues that it is not a natural state of affairs. If you go back before the 1930s, for example, pedestrians walking out into city streets was far more normal. Drivers of vehicles were expected to be paying attention, and to yield to the vulnerable.

A busy street in San Francsico in 1906, before cars had claim to the street.

In other cities and cultures – say Berkeley, California or Hanoi, Vietnam — people have very different ways of crossing the street. That said, in the current driving culture in the Twin Cities and the vast majority of the country, not stopping for pedestrians is simply the default social behavior. So that when he hears the “excuses” offered by drivers, Christiansen is empathetic.

“When we’re driving, the car becomes our body, and we’re in movement together as a group,” Christiansen explained. “One feels the heat of the other cars around you as you’re moving, so to do something unusual [like stopping for a pedestrian] feels dangerous.’’

“Where I see a problem with the stings is that it’s not that simple,” Christiansen told me. “It’s not a matter or illegal or criminal individual behavior. This isn’t about an individual flouting the law, it’s a very real feeling of pressure from motorists.”

Christiansen believes that a more radical shift in the culture of the street needs to happen, where drivers become far more attentive to the urban world around them.

“With the stings, I fear we over-rely on them,” Christiansen said. “We rely on enforcement as the solution to the problem, though it seems to be a very effective way to get people to start looking differently at things. But then there’s all this ambiguity with the pedestrian, especially with the second lane. Someone stops, but then the second car whips around, which leads to death.”

That said, Christiansen believes that the yearlong campaign, and events like the one at Maryland and Greenbrier this week, remain a good step forward. Watching people begin to connect the dots between driving and safety — it’s nice to think that something good is coming out of it.

“The main goal of today’s event is safety. I don’t want anybody to get hit or anybody to get hurt,” Sgt. Ellison told me. “People are slamming on their brakes at the last minute. They’re not looking for pedestrians. They need to increase awareness, pay attention, slow down, put down the distractions, and drive carefully.”

As I was leaving the scene of the crosswalk, a group of three people in orange vests had just walked out between the white lines. One car stopped to let them cross the street, but then there was a sudden screech of tires. A taxi — a white minivan — hadn’t seen them, and hit the brakes just in time.

As the sun set off in the distance, Sgt. Ellison’s eyes riveted on the cars lining up on Maryland Avenue, fixed in a thousand-yard stare. The last thing anyone wanted was for someone to get hurt.