Hot on the heels of the new vegan butcher shop comes another groundbreaking self-negation. Within a month Northeast Minneapolis is going to have the first full-fledged water bar of its kind, an establishment where you can sit and drink a variety of local tap waters to your heart’s content. Their delightful motto: “Water is all we have.”

Though I can’t help but chuckle, the Water Bar is no joke. It’s the culmination of work from a team of Minneapolis social practice artists who specialize in community engagement, and the idea is to start calling attention to the importance of communal water systems. For the next year they’ll be serving Twin Cities waters to the masses and, they hope, starting conversations that could not be more fundamental to our everyday lives.

Wallace went on to discuss culture and kindness, but he could have talked about underground pipes. Just as a fish cannot see the water all around it, the first rule of infrastructure is that it’s almost always invisible. We tend to take our infrastructure for granted. That is, until it breaks.

“People think Minnesota doesn’t have any water problems, that we have so much water because we’re the land of 10,000 lakes,” Shanai Matteson told me. Matteson and her partner, Colin Kloecker, run a Minneapolis-based social practice art organization called Works Progress Studio, and the Water Bar is their brainchild.

“Water is not something people think about, but we have potential water shortage problems and water quality problems, like what’s going on in White Bear Lake. And across Minnesota, most people get their drinking water from groundwater sources, and those are not immune to pollutants,” Matteson told me.

For the record, the tap water in Minneapolis and St. Paul comes from the Mississippi River — after a visit to each city’s treatment plant, where it is filtered and disinfected. That said, though it takes a discerning palate, you can taste differences between waters from different places.

“We do tasting flights,” Matteson explained. “There are subtle differences in how the water is treated; for example, private well water is not really treated in the same way. Sure, it’s tested and safe to drink, but it tastes different from city water. And we travel to other places and you can really tell where water isn’t quite so abundant or where cities don’t have the same level of treatment methods in place.”

Like the Steam Plume Project I wrote about a few months ago, the idea for the Water Bar came out of an art and science collaboration organized by Public Art Saint Paul, which had focused on starting conversations between artists and scientists. In particular, the group worked around the Mississippi River, asking questions about how it relates to the Twin Cities’ physical and social environment. 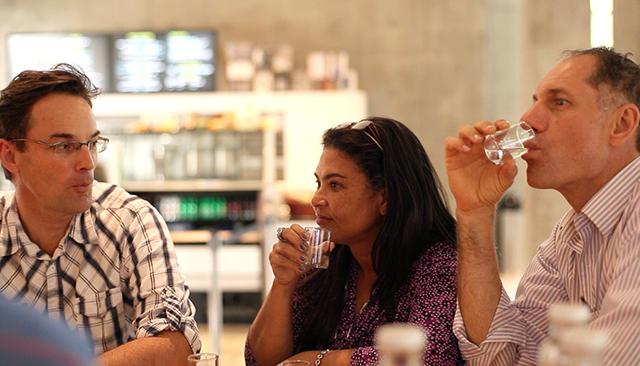 Courtesy of Works Progress Studio
The organizers of the Water Bar hope to start conversations that could not be more fundamental to our everyday lives.

As they learned more about the river, Matteson and Kloecker began to think more carefully about water. And thus the water bar was born.

The premise is pretty simple, really.

“The Water Bar is a bar that serves local tap water. We give it away for free; it’s primarily Minneapolis tap water, but we’ll have other local metro area taps, some rotating taps, maybe some time tap waters from other parts of MN. The idea is to help people talk about their connections to tap water,” Matteson said.

They’ve taken the project all over the state, and around the Midwest. And now, kind of like a food truck that finds a permanent home, the Water Bar project is moving into a shop on Central Avenue just off Lowry. Having a permanent home will allow the project to expand its reach.

“The most important thing is that we’re actually combining the Water Bar with a public studio, which we’re thinking of as an art sustainability studio and incubator, intended to build local projects with other artists and designers, all about water and environmental sustainability at the local level,” Matteson told me.

The first step though, is to recruit some bartenders. Works Progress is going to wrangle experts on the water system from various capacities — engineers, city employees, environmental experts, students — who will be trained in some of the basics of the Twin Cities’ water system. Their job will be to pour the drinks, and start the watery conversations.

(The tip jar will go to water-related charities, I am told.)

At the intersection of art, place, and water

Northeast Minneapolis is famous for lots of things: the sometimes awkward marriage of churches and bars, lots of diversity, the Mississippi River, beautiful parks, and a burgeoning art and local brewing scene. It turns out that a water bar on Central Avenue might bring all of those things together.

“There’s always this talk about technology or the green economy, about getting artists involved. Well, this is a way to bring artists along as your neighborhood changes. People think of artists as being in studios with paintings or sculptures, as not necessarily being a part of the bigger community. But here it’s about community building,” Koski said.

A segment from TPT Rewire’s “TV Takeover” gives an idea of what to expect at the Water Bar.

Through the collaboration with the Holland neighborhood, the Water Bar will be occupying a newly remodeled space on Central Avenue for the next year. And if it works, they’re going to be serving the ultimate in watered down drinks for some time. (Works Progress is currently writing grants to keep the Water Bar going into the future, and there’s a GoFundMe page where you can help support the project.)

“Putting it on Central Avenue, this is a way to bring this to the next level,” Koski told me. “Right on Central, where 90 percent of Northeast will travel. At any given time during the week you’ll have artists engaging kids, older people, middle-aged people, white, black, Latinos. It’s right there. It can’t be more visible.”

I love imagining the look on the face of bewildered passers-by first noticing the words “water bar” hoisted above the narrow storefront. Then going inside to see a bar, some stools, and a bartender waiting to serve all-you-can-drink free water.

If you really need a beer instead, Fair State Brewing is just a block or so away. But in the meantime, enjoy the Twin Cities’ finest local taps. And feel free to chat with the bartender. That’s the whole point.