If you look closely at the details of this year’s state government budget bill, you’ll discover a quiet debate that might shape the future of the neighborhood surrounding the Minnesota State Capitol. With a light-rail line running every 10 minutes along University Avenue, just outside the House and Senate chambers, there remains an open question about whether the state government complex needs more parking lots, or whether the state government should be doing more to promote transit for the thousands visitors and employees to the Capitol.

For most of the 20th century the answer has been “more parking.” The Capitol area is ringed with parking lot of all stripes, surrounding government buildings with a less-than-walkable asphalt crater. But with quality transit finally serving the area, some are asking whether the neighborhood can start to transition to a post-parking future that might look more like its past than its present.

A short history of the Capitol area

As I wrote last year, the Capitol, over a century old, poses particular transportation challenges. Activity peaks during the annual legislative session, and when political demonstrations bring thousands to the mall to bend the course of political progress, the Capitol neighborhood can seem an impossibly crowded place.

But outside of legislative hours, or during the “off-season,” the Capitol area and its environs can seem deserted and quiet. (I should know, I worked part-time at the Legislative Reference Library a decade ago.)

When it was built, the Capitol wasn’t so lonely. It was constructed in the midst of one of St. Paul’s most famous neighborhoods, near “Central Park” and on the seam of the dense apartment belt below Summit Hill and within walking distance of downtown.

These days, there’s almost nothing left of that early-20th-century landscape. Landmarks like the park, or the Mechanic Arts High School are all gone. The old apartments, hotels, mansions and parks were some of the state’s first victims of the urban renewal bulldozer, and have been replaced with vast memorial-filled lawns, government offices, and a few low-slung ’60s-era buildings and a whole lot of parking lots.

The uniform landscape is a consequence of its unique status. Much as the District of Columbia is governed by political appointees, since 1967 the 60-block area around the Capitol has been governed by the Capital Area Architectural and Planning Board (CAAPB), an autonomous committee whose jurisdiction trumps local St. Paul zoning. The 12-member board is charged to “preserve and enhance the dignity, beauty, and architectural integrity of the capitol, the buildings immediately adjacent to it, the capitol grounds, and the capitol area.” (Among other things.) That grants the Capitol area an enviable degree of autonomy, though how it gets used remains an open question.

New parking at the Capitol?

Tucked into this year’s state bonding requests was an item that might signal the one possible direction for the Capitol area: a $66 million Department of Administration request for a new visitor parking ramp there. The ramp would require the purchasing of two parcels of land in the Capitol area, the demolition of existing buildings, and the construction of a new 1,700-space ramp.

“We have more demand for parking on the complex than we have stalls,” Department of Administration Commissioner Matt Massman told me. His department, officially charged with the worthy goal of “providing the best value in government administrative services,” only has 450 employees. But it oversees parking and buildings for the far larger 8,000 employees in the capitol area.

“Our focus here is really on making sure there’s a reasonable supply of visitor parking near the Capitol complex. We have only 650 visitor stalls and we have, as you know, probably 300,000 people that visit the Capitol complex in a year,” Massman said. 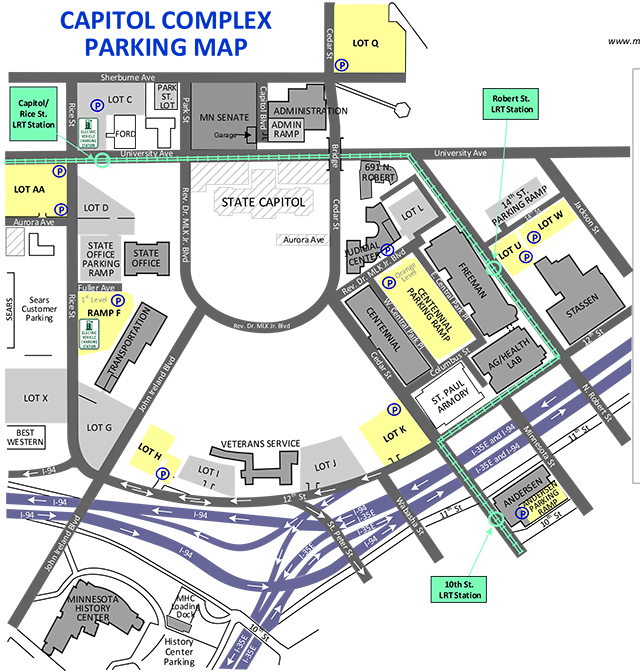 As the shenanigans around parking at the new Senate office building illustrate, parking can be quite political. The parking lots that ring today’s Capitol complex form a Kafka-esque array of price points, and the proximity of one’s parking space to the center of power reflects one’s status. At the lowest rung is “Lot X,” the spaces in the 1962-era Sears building that occupies a huge parcel of land at the corner of Rice and University, across the street from the State Office Building and the Department of Transportation.

(Part-time library aides like me had to park “even lower;” I typically parked for free on a nearby city street in St. Paul’s Frogtown neighborhood, which involved a half-mile walk through the parking-lot crater.)

In the budget request [PDF], the Department of Administration cites the possible redevelopment of the Sears parking lot as one reason for the new ramp. But not everyone thinks that the department’s budget request is necessary. In response, Paul Mandell, executive secretary of the Capitol Area Architectural and Planning Board (CAAPB), drafted a counterpoint to the budget request Here’s the key point from the memo:

Given the level of need, the limited sites available and concerns for traffic impacts on our roads, the CAAPB would encourage a stronger State commitment to transit subsidies for employees; be it for ride-share, van pools, or ideally a greater subsidy for the Metro-Pass (in order to make use of transit at least cheaper than parking and thus more attractive), similar to what other local businesses have moved to as an alternative to simply building more and more parking at increasing costs.

The official governor’s office request splits the difference, budgeting $6 million for the acquisition of land and demolishing of the buildings, but no money for any ramp construction. The final bonding details remain to be worked out by the Legislature.

The debate over transportation demand management

For CAAPB leader Mandell, the construction of more parking in the Capitol area is frustrating because for years the board has been trying to turn the tide of emptiness in the old neighborhood, and figure out ways to create more infill on sites like the Sears lot. Instead of ramps, he’d like to see parking be fronted by exterior buildings that would better serve the street and the neighborhood.

“These vacant parcels have been underutilized for so long,” Mandell told me. “We’re taking a more serious at look encouraging stronger state involvement with ridesharing and that kind of thing, so not all the resources go into parking. We’re starting to look at revisiting our zoning and design controls over the next two years. Commercial ventures around Sears and the League [of Minnesota Cities block] have been slow to come, but we’re trying to encourage that kind of stuff. If the market continues to be strong, I am hopeful.”

Compared to its early 20th-century roots, the Capitol area has completely changed. The former historic urban fabric is almost gone, replaced by the office buildings and parking lots of today. But the future might offer yet another chapter, as demand from downtown and along the Green Line begins to reshape the area. How it works out will affect the finances of both the city of St. Paul and the state of Minnesota.

But if the Capitol area doesn’t need more parking, how will visitors and employees get to work? That’s one problem that Becky Alper, the workplaces program manager for Saint Paul Smart Trips, is trying to solve using a concept called “travel demand management.” For example, Alper believes that for companies in downtown St. Paul and large employers like the state government, one key variable is the pricing differential between employee monthly parking and a subsidized transit pass.

Alper points out Regions’ Hospital next door to the Capitol complex, which prices its employee monthly parking fee higher than the fee for its transit pass. That’s one way that they manage to boost their transit-to-work “modeshare” and reduce the need for more parking ramps. Another useful tool is being more flexible about having hybrid options: for example, offering daily parking for times when transit pass holders might want to drive, or Nice Ride options for employees with parking passes.

“How does more parking in the area affect economic development?” Alper asked me. “I’d like to push the state of Minnesota to be a leader in transportation demand management. For the state of Minnesota there’s no reason it shouldn’t be at the forefront. That means rethinking the relationship between parking and transit options. What moves us forward?”

If history is any guide, when the Legislature passes its bonding bill in a few weeks, parking will remain a high priority. Somewhere in the capitol area, something new will start getting paved.