Few things are as frustrating as rush-hour traffic in downtown Minneapolis. On Tuesday I took the 94 bus from downtown St. Paul and watched the city blur through the window as it zipped down the freeway. The second we arrived downtown, we were instantly enveloped by the traffic. As three stoplight cycles went by with no forward progress, the bus driver kept letting people off, because anyone could walk faster than the mass of halted cars. Gridlock like this happens most days like clockwork.

The maddening rush hour makes the debate about redesigning Third Avenue, a key north-south street through downtown Minneapolis, an odd surprise. A City Council committee split 3-3 earlier this month on whether to go with staff’s four-lane proposal or adopt a counterintuitive “road diet” design that would swap two traffic lanes for a turn lane in the center. Proponents of the three-lane option point to studies suggesting the “smaller” street would be just as effective for car traffic, and a better place to walk or bike. Opponents remain convinced that a road diet would just make congestion even worse.

During the downtown rush hour it’s only the bicyclists who seem to have any success, zipping around cars lined up like so many sunbathing turtles. But while riding a bike through downtown might be expedient compared to the rush-hour alternatives, it doesn’t look pleasant. On many streets, especially the ones without bike lanes, bicyclists keep their heads down and their tires in the gutter, surrounded by honking traffic and tailpipes emitting their subtle stench.

Third Avenue, connecting the Convention Center to the Mississippi River and the bridge to Northeast, is one of few two-way downtown streets, and there is wide support for building a protected bike lane along it next year. Unlike most of the city’s downtown bike lanes, the new project will have a buffer between the bike lane and the moving cars, increasing comfort and safety for more people.

“We’ve been saying since 2009 that we need a north-south high quality, comfortable bike route in the heart of downtown. It is really an important connection in the city,” Ethan Fawley, the director of the Minneapolis Bicycle Coalition told me. The coalition had initially wanted protected bike lanes to be built as part of the city’s Marquette and Second Avenue bus project, but began focusing on Third Avenue when that proved impossible.

The question, though, is what the rest of the street is going to look like. After careful study, the city public works department had proposed a three-lane “road diet” layout that would keep planted medians along the street, while dropping one of the travel lanes in each direction in favor of a center turn lane. 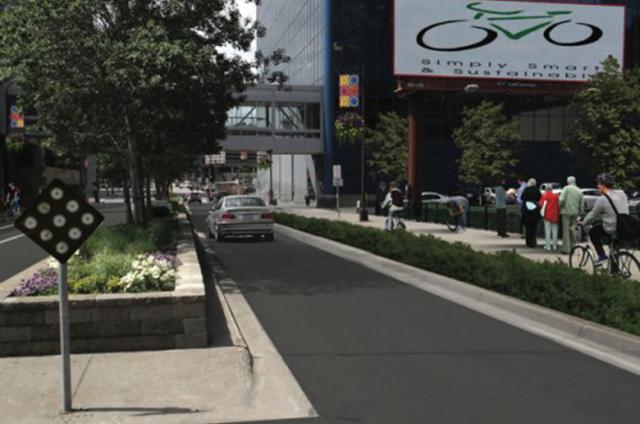 Courtesy of the City of Minneapolis
The “road diet” design

However, after critical feedback from downtown businesses over the winter, city staff changed the project plan, dropping the planted medians in favor of a four-lane design more in keeping with today’s street layout. 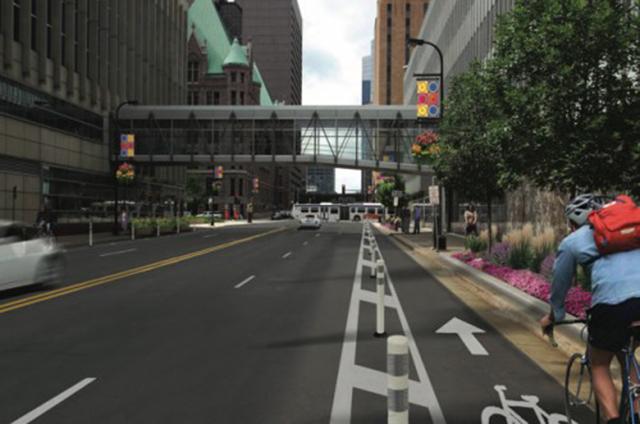 Courtesy of the City of Minneapolis
The revised, four-lane design

For some downtown leaders, the three-lane plan seemed like a case of street-design mission creep. Council Member Lisa Goodman, who represents the downtown retail core, called that idea “disingenuous” and an attempt to change driver behavior by removing travel lanes.

The debate offers the classic example of what engineers call a “road diet,” also known as a 4-to-3 conversion. The idea can be a bit counterintuitive: For any four-lane road with two lanes in each direction, left-turning traffic inevitably clogs up the street. As one traffic engineer recently explained, engineers love left-turn lanes because they guarantee free-flowing traffic and more consistent speeds. That’s why, at least in theory, a three-lane street can be as effective at moving cars as a four-lane street. And, more important, the smaller design dramatically improves safety. (Minneapolis examples include Riverside Avenue on the West Bank, which was converted about five years ago to a three-lane “road diet” design.)

That’s true up to a point. Somewhere around 20,000 cars per day, according to most national standards, the congestion benefits of the road diet disappear due to problems around “traffic stacking.” For the Third Avenue case, when comes to moving cars as efficiently as possible through downtown, according to the Minneapolis city data [PDF], it remains unclear which layout would be better. Under most conditions, the two designs perform about equally well, and that’s a big selling point for advocates.

“We recognize this is going to be a high-profile corridor downtown, a catalytic project for the city,” Fawley told me. “It’s important to get it to be the best it can be for everyone. We think that the three-lane proposal is the safest and greenest, and it has been shown it can work from a traffic standpoint. We know other stakeholders who are concerned about numbers that staff put forward, but we feel we need to trust the numbers or try it out.”

Courtesy of the City of Minneapolis
Even with inflated traffic projections, the estimated cars per day used in the city traffic study fall within the range where a 4-3 road diet performs well.

Still, looking at Third Avenue today, and how clogged it can become at rush hour, it’s difficult to imagine that less is more. Downtown City Council members like Lisa Goodman and Jacob Frey have remained skeptical that a change to three lanes could be accomplished without making traffic worse and hurting downtown businesses.

“I understand this issue and I’m a supporter,” Goodman told me when I asked about bicycling downtown. “But what I’m not a supporter of is trying to get a pound of flesh out of these business owners by saying that getting a bike lane isn’t good enough. There are almost 200,000 people in downtown daily. Getting people in and out might not be a priority for bikers, but it is a priority for downtown.”

Beyond the bicycling debate

The Third Avenue debate is particularly salient because of its proximity to City Hall, the gorgeous 1908 Romanesque building that sits at the corner of Fourth Street. It remains an open question what the streets around the majestic stone building might look like, and the stakes move beyond the bicycling debate.

“Third Avenue, being at the center of city government, should be the symbol of what the city’s priorities are,” Julia Tabbut told me. Tabbut is the vice chair of Minneapolis’ 15-member Pedestrian Advisory Committee, one of the city’s two citizen committees focused on street design. She has spent the week lobbying council members in favor of the three-lane design that would improve the City Hall streetscape.

“If somebody is coming in a wheelchair, you can’t get to the entrance on 4th Street without passing along this sidewalk, where there’s no actual room for wheelchairs. We measured and it’s 56” between the wall and the nearest fencepost. Nowhere is that acceptable,” Tabbut explained.

Last week, after heated debate, the proposal deadlocked in a City Council committee. It ended up forwarding the new street project without an official recommendation, leaving the decision up to the full City Council, which will decide the matter on Friday.

“Primarily it’s a safety issue,” Tabbut told me. “Greening helps humanize the environment and makes it a place where you can feel OK being on foot. But the safety consideration is more important. Right now you have four lanes of traffic to cross. If they take out those medians and add bike lanes, it’s six lanes of things going with no break. And knowing that from an engineering standpoint, it doesn’t slow traffic to make this change [to three lanes], and that it would make drivers safer too, I see no reason why we’re even having this argument.”

Downtown Minneapolis has been battling congestion forever, an eternal war between transit, drivers, freeways, exit ramps and parking lots. But over the last few years, there’s been a visible change in focus toward paying more attention to sidewalks and less attention to the endless rush-hour clogs. With both Washington Avenue and Nicollet Mall slated for reconstruction that would add new sidewalks and bike lanes next year, the question remains whether the rest of downtown should follow suit.

“Normally adding a bike lane would be called a victory,” Goodman said. “Now this is about a lane diet. That means trying to change people’s behavior by eliminating lanes of traffic so that people will not drive as much. That might make sense outside the downtown core, it might make sense in someone else’s ward, but don’t think that makes sense on one of the core streets in downtown Minneapolis.”

The downtown Third Avenue redesign debate: Which is better — four lanes or a ‘road diet’?