Because of my name, people who meet me sing the song. You know, the one from the 1970s educational cartoon, the one where the rolled-up congressional bill sits on the Capitol steps and sings about how “a bill becomes a law”? I’ve had the song stuck in my head most of my life.

And this spring, I re-created part of the Schoolhouse Rock journey by crafting a Minnesota caucus resolution. It all began in this column last year, when I wrote about Minnesota’s speed limit policy, describing state controls of municipal speed limits and the complicated debate around policing and traffic safety. So last month, on a request and a whim, I authored a caucus resolution aimed at deregulating speed limits. Here’s what happened next, and what it reveals about Minnesota’s traditional caucus system.

I didn’t want to write a caucus resolution; it was thrust upon me. In late February, an elected-official friend of mine sent me a Facebook message suggesting it would be a good idea to have a speed-limit-deregulation resolution. The problem is that cities like St. Paul, Minneapolis and some first-ring suburbs struggle with state regulations over street design. For example, state-aid standards require “variances” whenever older cities try to use less common traffic calming measures, and there’s a blanket restriction on cities setting speed limits lower than 30 miles per hour (except by schools or on bike routes).

I hemmed and hawed a bit, and forwarded the request to a few advocates. But as time passed and nothing happened, other caucus resolutions began appearing in my inbox. The day before Minnesota’s March 1 caucuses, I simply thought “what the heck; why not me?” Copying and pasting the .pdf template for a resolution about climate change, I gathered my legalistic brainwaves together and wrote my first attempt:

WHEREAS: Lower car speeds are proven to improve safety for people walking and bicycling around their neighborhoods.

BE IT RESOLVED: The DFL supports direct accountability to local government by allowing cities to set their own speed limits.

Looked good! The next step was to pass it around to a few people who lobby the Legislature for safety advocacy, and some folks in local transportation politics. The feedback, mostly positive, resulted in a few minor changes to the language. For example, I considered adding the words “on local streets” to the end of the resolution, and added in a line about kids and schools.

Once the final version was complete, the last step was distribution. I uploaded the .pdf into the Google cloud, and then used a URL shortener to create an easy-to-remember web address for the file. (Note: Make sure to set the Google document to “public” before disseminating.)

Then I shared the resolution link [PDF] on my Twitter and Facebook pages, and forwarded the resolution to a few transportation-related email lists. And all this happened just hours before the caucus itself.

Note: Only procrastination kept me from sending the resolution to other parties, like the Republicans or Greens. To me, there’s nothing partisan about speed-limit policy; it’s simply about safety and local control. In fact, it would be interesting to see people react to the issue across party lines or the state’s broad-ranging geography.

Debating at the caucus

If you’ve ever attended a precinct caucus, you know that the next step is the heart of the whole affair. Every two years (and sometimes annually, if there’s a city election) people who share a precinct, which is typically just a few city blocks square, file into a room and discuss the matters of the day. This year, with the contested presidential primaries on the ballot, the caucus rooms were overflowing, but in a more typical year you might find a few dozen people from the neighborhood, a mix of partisan regulars and the curious. After a few introductory remarks, the resolutions begin, and people take turns standing up, holding pieces of paper and reading their ideas out loud to the group.

At that point, there’s usually an up-or-down vote. Sometimes it’s simple, and resolutions pass immediately. Other times things can become heated and interesting. Last year two young people from the neighborhood introduced two resolutions about police accountability in my precinct. It turned out that one of the other neighbors was an off-duty police officer, and the resulting conversation was eye-opening and heated. The resolution passed on a show of hands, but safe to say, the issue remains unresolved.

Based on feedback from Twitter and email, my speed-limit resolution fared well in Minneapolis and St. Paul precincts where it was introduced. 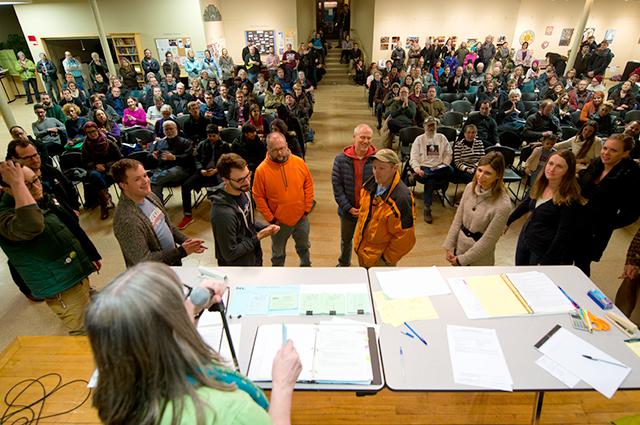 And a report from St. Paul:

“It was a very rushed process generally because we got a late start. No discussion or opposition, just a generally supportive-sounding murmur about being able to make our own decisions on speed limits.”

In one South Minneapolis precinct, the resolution was shot down on the suspicion that it would “increase racial targeting.” In another it was amended to apply only to streets that relied on local funding.

Meanwhile, on the East Side of St. Paul, another advocate reported in:

“Lots of discussion. One person suggested that the legislature should just pass a special law for each individual street needing a lower limit. One suggested it would just be used to issue more tickets. Not a lot of positive questioning.”

Ironically enough, in my neighborhood things went a bit differently. One of the neighbors brought up safety as a prime concern, and after a discussion about the pros and cons of local vs. statewide control of street design, the resolution failed.

But all in all, the speed-limit resolution passed in at least a dozen Twin Cities precincts, which meant that it would go on to the next stage in the process, the District Conventions.

The district conventions are the step between the precinct and the state convention, where nominations for statewide offices take place. They’re typically in a large high school auditorium with a few hundred people, and the party electeds make speeches.

“In the past, there used to be a lot more debate at the precinct level. It was more than party hacks, there was more activism around peace and wages and that kind of thing,” Sharon Sudman told me last month when I asked what had become of my resolution.

Sudman is the DFL “resolutions chair” for Senate District 64, which encompasses roughly the western half of St. Paul. It’s her job to chair the committee that packages, forwards, and then resolves the voting for all the resolutions that emerge from precinct caucus night.

One of the big challenges for executive committee members like Sudman is resolving inconsistencies between versions. If two resolutions are similar, or if contrasting amendments appear, it’s their job to make it simpler for the convention, and the committee has “broad authority” to make small changes.

“It’s a lot of time physically handling paper,” Sudman explained. “This year we had as many unique ones as in 2008! It’s really difficult because it’s more of an exponential thing. If you just have a few resolutions, you have no problem sorting them and getting them done. It’s a couple meetings. But with this kind of thing, I’m still trying to get my arms around how long it’s going to take. I spent 10 to 15 hours last week sorting them, and could have gone through one more time, figuring out if it’s civil rights or tax policy. When you have 500 of them, it’s like whack-a-mole meets the memory game.”

At this point, after long hours from the Resolution Committee, all the resolutions appear on a simplified ballot where, after brief speeches from attendees in defense of the different resolutions, the collected delegates vote on the paper ballot. Resolutions require a 60 percent threshold for approval, and each district is allowed to “approve” only half the number of resolutions as they have delegates. (Senate District 64, with 112 delegates, could only approve 56.)

The promise of the caucus

One of the most widespread resolutions debated at this year’s precinct caucuses was whether Minnesota should even be having caucuses in the first place. A resolution was widely introduced that would switch Minnesota’s party nomination system from a low-turnout caucus to a high-turnout primary, which could do a great deal to cut down on all the lines and hassle. Though the change would not affect the resolution process, it would likely reduce the reach of the precinct caucus debates, and alter the nature of how we view our democracy.

The caucus format offers up an image of community that dates back to the Greeks, and their idealistic notion of the polis of 10,000 citizens (property holding white men, of course) who would come together to rationally discuss political decisions. The American version is symbolically translated through the “town hall meeting,” the mythic New England-style get-together of all the townsfolk, where debates about planting crops, going to war, or building a monorail are held.

That said, as the sometimes-frustrating, sometimes-illuminating reality of the people gathered  for the precinct caucus inevitably meets the broader, more cynical two-party system, ideals tend to fade and politics comes to the fore. Based on conversations I’ve had with party insiders, the state platform is a closely guarded thing.

Meanwhile, in St. Paul, the Senate District 64 Convention took place last Sunday, and I was curious how my resolution had fared. On Wednesday I reached out to Sharon to find out:

Not well! It only received 40 percent support, so almost dead last. Sorry! There were just so many more critical ones on gun control, Citizens United, etc. and we could only adopt 56.

Probably it did suffer from being the last item on the ballot, since it was in Transportation. Some people do get ballot fatigue or run out of time.

I suppose the takeaway lesson is that anyone, even Cityscape columnists, can write their own caucus resolution at the last minute. It’s pretty easy, and if you do a little publicity, people all around the state might end up talking and thinking about your idea. There’s something inherently amazing about that. And maybe someday, if the party adopts your plank, you begin building a coalition of support and the resolution dream might become reality. (That is, unless your resolution idea deals with transportation and is shunted to the bottom of the convention list.)

It might seem like a long road, but for the volunteers for any political party, the complexity of the process and the hours of work remain fundamental to the process.

“The more democracy you have, the more things seem disorganized; but they’re really not,” Sudman told me. “It’s managed chaos. With no money, and all volunteers, if things are running too smoothly, that means some iron fist has come in and taken over. But if people are involved, and trying to do things as a group without much professional training, then it might seem messier, but it’s really democracy in action.”