Its deep black tiling nearly complete, logos and letters fully mounted, the contours of the new billion-dollar Vikings stadium have crystallized in downtown Minneapolis. Walk the perimeter and you get a sense of how the building meshes with surrounding streets amid the fast-changing, re-branded “East Town” neighborhood.

Apart from purple hordes, the last missing ingredient might be the U.S. Bank Stadium’s public art. Last year, the Vikings announced a “distinct monument,” a Viking ship-themed sculpture for the plaza outside the stadium. But the announcement last week of the latest public art addition, a horn-themed sculpture on a stadium plaza, was met with quiet groans from the local arts community. Compared to art at other Twin Cities stadiums, the two public artworks read more as advertisements than art, and might be the latest in a long line of fumbled opportunities for Minnesota’s football team.

Stadiums hold an odd place within the public-private spectrum. In some ways, they’re public spaces full of diverse people mixing informally, and almost always built with significant public subsidy. On the other hand, they remain privately purposeful. Most stadiums are singly focused around a private entertainment business, and they’re often designed to maximize team revenue.

This tension places stadium public spaces in an odd position. For example, during the off-season, the Twins’ stadium sits empty for six months, its sidewalks part of the Warehouse District. It prompts the question: To what extent should a stadium’s sidewalks and plazas be a regular part of the city’s streets?

“There was a huge opportunity that hasn’t been pursued,” Colleen Sheehy told me. “I’m disappointed there wasn’t more of a public process with the Vikings stadium to create something or commission something truly significant for our metro area and our state.”

“Public art has been part of our human and cultural heritage forever, and in contemporary cities, it helps to create public places that are vibrant gathering places, where a lot of people from different walks of life can come together,” Sheehy replied when I asked her to explain public art. “It also can build support for arts communities by giving opportunities to create significant works in the public realm.”

(For some context, contrast the new art planned for the Vikings’ stadium with the public art around the old ’80s era Metrodome, which fellow MinnPost columnist Andy Sturdevant gamely explored back in 2012. Or the public art arches at the Blue Line’s “Metrodome station,” installed when that line was completed a decade ago, designed by a local artist named Andrew Leicester.)

For Sheehy and others, the most jarring part of the Vikings’ process was its lack of input from the local arts community. Minnesota and the Twin Cities have a thriving arts scene, yet the team decided early on in the planning process to outsource much of its planning to a California-based consultant.

“It’s really clear that they weren’t interested in getting any input from actual locals that understand the culture of art and Minnesota artists,” Cheryl Wilgren Clyne told me.

Wilgren Clyne, a local artist who has run multiple Twin Cities galleries over the years, was one of the key people involved in the public art projects around the new Saint Paul Saints ballpark. 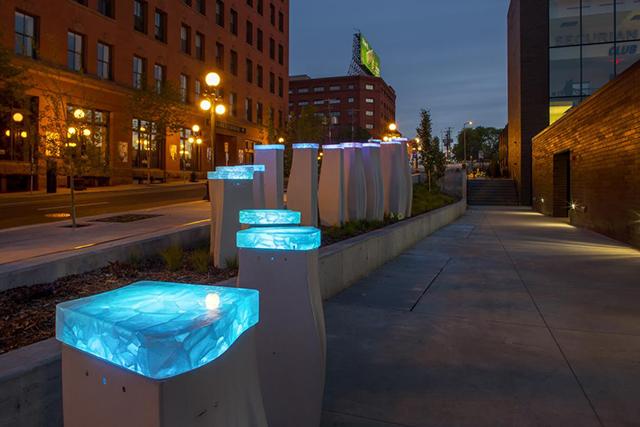 Instead of public artworks around the building, the bulk of the Vikings’ local art efforts focus on the interior. Earlier this year, the team called for local artists to line the walls with specially commissioned stadium-themed art. The result will be what the stadium partnership manager calls “a museum-quality stadium art collection.”

While the list of winning artists includes some of my favorite local painters, the art displayed on the concourses — all new work themed specifically around the stadium — will be accessible only to ticketed fans and therefore not really public. And, for Wilgren Clyne, the process seemed to take place without artists’ input.

“I think speaking to artists or experts in art that have training in the field would be a really good idea for the Vikings,” Wilgren Clyne said. “The public art selection committee right now, they’re primarily people that are business owners and people that do not have training in the arts. [With] the hundreds of thousands of dollars of art that they’re purchasing, they should have an art director that knows how to take care of it.” 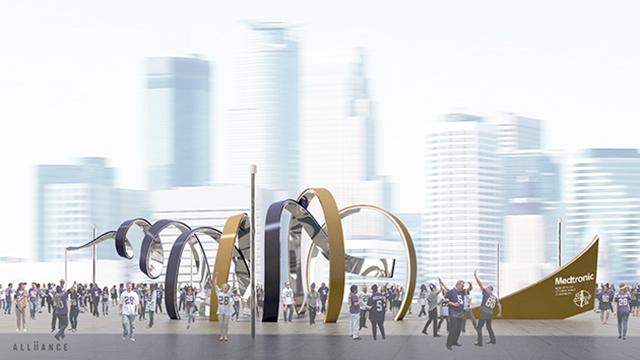 Alliiance
A rendering of the new “Horn” sculpture planned for Medtronic Plaza in front of the Vikings’ stadium.

The newly unveiled 100-foot-long sculpture called “The Horn,” designed by Minneapolis-based public placemaking firm Alliiance, will be placed on Medtronic plaza between the light rail station and the main entrance. According to the team, the work “is an aesthetically striking sculpture, consisting of two flowing ribbons … polished and seamless mirrors, reflecting the many faces of the community who come to explore and interact with the sculpture.”

“You can see that Medtronic’s name is all over it,” Jack Becker said this week. “It’s not really best practices to have the corporate sponsor’s name on the artwork itself. That just doesn’t happen, and it’s pretty poor taste.”

Becker runs the St. Paul-based nonprofit Forecast Public Art (publishers of Public Art Review, a national magazine on the topic). He points to the Twins’ Target Field Plaza as an example of stadium projects doing public art right. The plaza’s largest feature is a massive kinetic sculpture that covers the parking ramp, and moves and undulates in the wind. 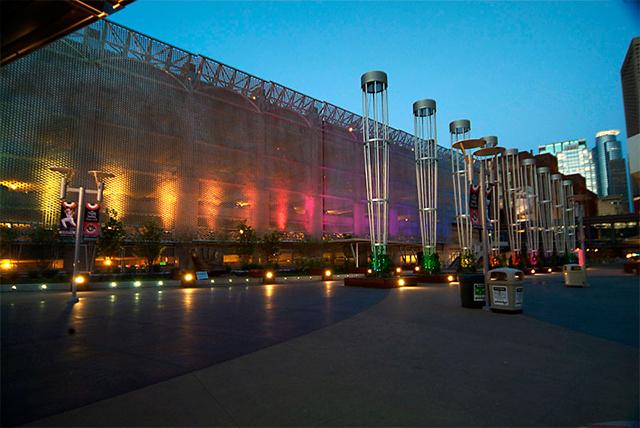 “Wind Veil by Ned Kahn is the most expensive public art project in Minnesota history, and shows naming rights at its best,” Becker told me. “It’s a cool piece that has several functions. Kahn cares about the environment, about making invisible things visible. And it also masks an ugly parking garage. People don’t know what’s behind it because they are so transfixed by the artwork.” 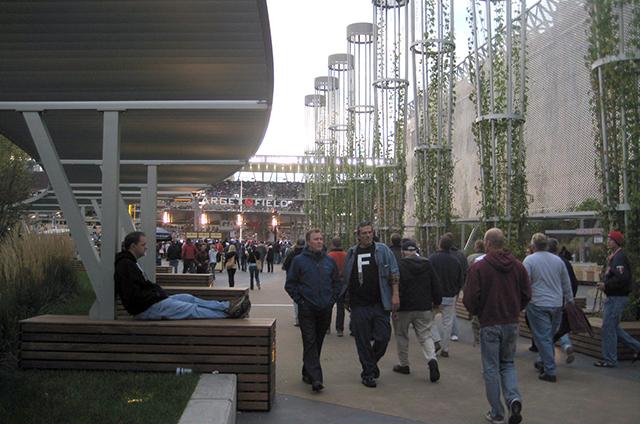 Years ago, Becker met informally with team officials and offered suggestions: a public art treatment of the new skyway connection, or using artists to help design a window treatment that would reduce the amount of migrating birds killed by the stadium’s new reflective glass facade. (In a pun that I cannot but help repeating, Becker called a potential public art and bird-proof glass project “killing two birds with one stone.”)

According to both Sheehy and Becker, the combination of the Vikings’ two projects lack the transcendent quality of public art at other stadiums.

“The work that has been apparently accepted for the outdoor spaces seems more like advertising to me than public art,” Sheehy said. “The ship seems like such a literal object, more designed to be an advertising platform. And the horn sculpture … it could be interesting. But to me, it has Medtronic’s name on it, so it ends up feeling like it’s a billboard.”

Much like public/private tensions surrounding the neighboring downtown park, the public spaces around the Vikings stadium fall into a gray area. Yet if the experts are right, the new artwork for the team is a missed opportunity because, while most of the attention in the new stadium will be on the playing field, for people who don’t attend games the stadium’s streetscape will be just as important.

“You have to consider the source,” Jack Becker said. “It’s about branding, it’s about their identity being the most important thing. They’re trying to go a good job of that, and you know, the Vikings’ horn, I guess it fits that criteria.”

When the Super Bowl comes to Minneapolis in 2018, instead of public art and architecture that highlights the local arts community, it appears the new stadium’s artwork will be just another team advertisement and corporate sponsorship opportunity.

“It’s a huge building right in the middle of our city, a huge amount of money with a lot coming from the public,” Colleen Sheehy said. “I aspire for more.”