Unless you live there, it’s a little known fact that the West 7th Street neighborhood is full of snakes. On neighborhood facebook pages, posts about garter snakes appear like clockwork every spring and summer. People generally express amazement, surprise, or sometimes fear about the non-harmful snakes appearing in their yards or, less frequently, basements.

People shouldn’t be surprised, though. Because of its geology and proximity to the river, St. Paul’s West 7th Street neighborhood has long been a haven for snake activity. For most people, the garter snakes of West 7th Street are a sign of the uniqueness and natural magnificence of St. Paul’s most river-centric neighborhood.

Curious about the snakes, I put out a call to ask people to describe some of their encounters:

“Last year we decided to buy a house along West 7th Street,” Barbie Bobbit Schwartz, who lives in the West End, told me. ”I was doing the laundry three days later, and one fell from the ceiling by the washing machine and almost hit me in the head. And that was first time we saw a snake. But there have been eight or nine in our basement since we moved in, and dozens in the yard. They range in size from 5-6” long to more than two feet.”

Schwartz, who is originally from snake-prone Florida, has a product called “snake away” on her porch and is learning to get used to the idea of snakes.

She is not alone. If you want to strike up a conversation with a West 7th resident, you need only mention the topic. Nearly all have a snake story to tell, like this one from Sean Kershaw, a West 7th resident who runs the Citizen’s League:

“There was the time when my husband, who hates snakes, was upstairs in our house at 7:30 in the morning helping our young daughter, who hates snakes, get dressed. He picked up some clothes off the dresser and as he passed them to her a snake dropped out.”

Another common thread of the snake stories is how much kids and pets seem to enjoy them:

“We have a slither of snakes in our yard,” Barbara Jungbauer said. “We keep having to rescue them from our dog, Mr. Bingley. I’ve explained to Bing that we love snakes… [but he is] not impressed.” 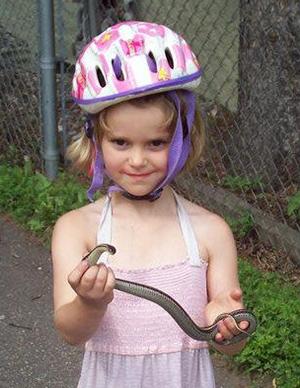 Courtesy of Lisa Wecht
Lucy Wecht in a 2010 photo holding a snake.

“I used to go hunting for them as a kid,” Chris Navarre told me over Facebook. “They were everywhere along the tracks by Watson and Osceola [avenues]. We would put them in five gallon buckets to see how full it got. They were harmless, until I came across an all-black snake about 6-7 feet long, I’m guessing it was an indigo snake. Still, I played with the garters. And now I have two pythons.”

(It must also be noted that many West 7th area residents have lived in the area for decades without seeing more than one or two snakes. They aren’t everywhere!)

I remember the first time I encountered a garter snake as a kid. My uncle Jerome was a biology teacher, and when he would visit he would constantly poke around the trees and margins of my backyard. He brought a garter snake over to me one day and held it out to me. I was delighted and disgusted in equal measure. (For many people, that feeling never leaves.)

But if you talk to a herpetologist, that’s the wrong reaction. The snakes of the Twin Cities are quite benign. “Minnesota has couple different species of garter snakes,” Jennifer Menken, a naturalist at the Bell Museum, told me. “They mostly eat small critters, lots of insects, invertebrates, frogs and toads, maybe an occasional small mouse or something like that. They’re kind of grab and gulp eaters.”

One of the reasons why the snake stories of the West 7th area are so disparate — people either see a lot of snakes or none at all — has to do with garter snakes’ oddly social behavior surrounding hibernation.

“They tend to hibernate in groups,” Menken told me. “A den or a hibernaculum might have 20 to 30 or 100 garter snakes in a good den. The bluffs along the river area really nice. Tiny micro caves or places they can all curl up in a ball.” 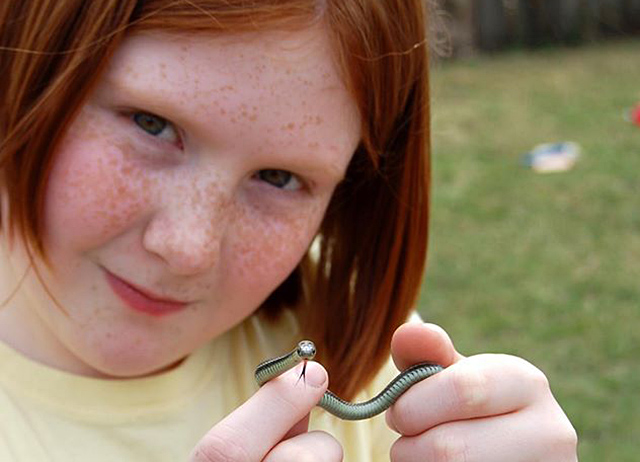 The garter snakes also form a key part of the river valley food chain. Not only do they feed on insects, all kids of predators eat them, mostly hawks, owls, or foxes.

“Because they den and hang out together in the spring, you get these large pockets of garter snakes,” Menken explained. “Once it gets warmer, they’ll disseminate and head off to find their own hunting grounds. And in the fall again, they’ll congregate back, so you have these large concentrations of them coming and going.”

(I sometimes think that garter snakes might share commonalities with St. Paulites. Both can be tight knit, occasionally defensive, and like most Minnesotans, have a tendency to hibernate.)

The Sunny Side of Snakes

Like Barbie, many people’s first reaction to the sight of snakes is some form of recoil. But if you talk to a West 7th denizen for long enough, you come to realize that a vast majority of the neighborhood has developed an appreciation for human/reptilian cohabitation. 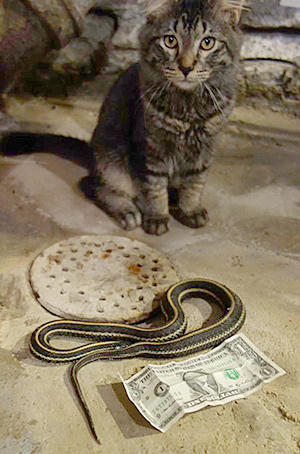 “They’re just part of the neighborhood,” Jeffey Adams, who has lived in his house by West 7th and Victoria for almost 30 years, told me. “In the real world people refer to them as the patron St. of the West End. I have no problem with them. There’s a little colony in my raised bed gardens in my yard, and they duck under when I walk by. They’re not aggressive, they don’t harm me. It’s actually kind of funny.”

(Last year, Adams accidentally ran one over with his lawn mower and felt very sad about it afterward.)

In fact, an appreciation for nature is a crucial component to the snake stories. “West 7th is the one St. Paul community that truly is along the river,” Wendy Underwood, who lives by West 7th and St. Clair, told me. “That’s completely rooted in our history, being one of the oldest neighborhoods. With our support of maintaining our natural environment, there’s things that come with that.”

Underwood insisted to me that the story of the Snakes of West 7th not be viewed as negative thing. Though she doesn’t often notice snakes herself, she has her share of stories, and sees the snake charm as one of the things that makes the neighborhood unique, full of character and life.

(“The snakes of West 7th is just a myth to keep all of you away,” joked Darren Tobolt, who is married to Underwood.)

Snakes and the River Valley 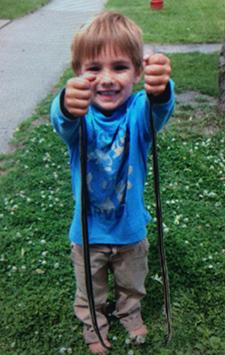 Like pigeons and skateboarders, snakes are ill served by common cultural narratives. The whole “Adam and Eve thing” is just the beginning, and as Indiana Jones’ script-writers well knew, ophidiophobia (fear of snakes) is a legitimate condition.

To me, though, there’s something honest and inspiring about the pleasant harmony between the people of the West 7th neighborhood and St. Paul’s snake-laden riverine ecosystem. They let us know that, right in the heart of St. Paul, the food chain is alive and well. The whole neighborhood, technically a national park, becomes a science museum, an example of how we come to terms with our environment, our phobias, balancing the human and nonhuman worlds.

To make a long story short, next time you see a snake in St. Paul, try not to scream. Rather, carefully carry the snake to a happy place and let it thrive.

The serpents of St. Paul: The West 7th Street neighborhood is a haven for garter snakes