Last weekend’s Open Streets event on Lyndale Avenue was the biggest one yet. For five years now, a group of urban advocates in Minneapolis, led by the Bicycle Coalition, have been closing off some of the city’s most prominent streets to cars on Sundays, to see them fill with seemingly every possible type of people and activity. Open Streets has grown tremendously, and this year there will eight events on streets throughout the city, including some new locations like Nicollet Avenue and the University of Minnesota.

But it wasn’t always so easy. The first Open Streets took a huge amount of bureaucratic persistence, and organizers had to jump through an amazing number of institutional hoops to make it happen.

Today, similar efforts to change the street are under way at St. Paul crosswalks. After years of working through city channels, urban design advocates have finally installed an artistic crosswalk and temporary bump-outs at the corner of Marshall and Fairview. The hope is that, just as with Open Streets, once they prove the concept is possible, the idea might take off. Given St. Paul’s crosswalk safety crisis, change can’t come fast enough.

The story of Open Streets

When I was working on my dissertation research for my geography degree, I found myself interviewing Colin Harris, a civil engineer and the founder of Minneapolis’ Open Streets movement. His story was surprising to me for how much work it had been to make the first Open Streets event happen.

As Harris described it, it took him over a year and a half of meetings with the city and other agencies, beginning in February of 2010, to make the first Open Streets event happen on Lyndale Avenue in the summer of 2011. He attended dozens of weekly meetings with the city’s licensing coordinator, police department, and other city staff to work out event details that, at the time, were a bit vague.

“They [the city] were like ‘No, you can’t use a bridge. No loops. You can’t isolate any part of the city,’ ” Colin Harris told me, explaining the tedious process. “But mostly it came back to the safety-concern standpoint, access for emergency vehicles in case of an emergency. But at end of meeting, the licensing coordinator suggested Lyndale as a possibility.”

As a result of the bureaucratic complexity, the first Open Streets event was delayed for a year. Eventually, after dozens more meetings, emailing and phone-calling back and forth, gathering neighbors’ signatures (they needed to get a 75 percent threshold) and convincing some skeptical business owners and council members, Harris and the first Open Streets prevailed.

Today, of course, Open Streets is a huge success story, and Minneapolis is a model for cities around the world, showing how to run an Open Streets-style event that appeals to a broad cross-section of the city. Yet it’s fascinating to look back and think about the tender threads that it kept the event alive at the beginning. What if there had been a huge rainstorm that first day? To me, the lesson seems to be that there are many ways that ideas can die on the vine, but only a few avenues of persistence and patience that keep ideas alive.

A similar story is unfolding at the intersection of St. Paul’s Marshall and Fairview Avenues, a corner that hosts a neighborhood library, an older apartment building, a single-family-style home, and a historic center for deaf people. Certainly it’s a busy intersection, with lots of cars pouring off north and south from Fairview to the Lake/Marshall bridge, and along the underpass that leads past the nearby interstate highway.

Just this week, the corner got an upgrade. Thanks to a collaboration between neighborhood groups and the Friendly Streets Initiative, an organization that focuses on street design, a formerly neglected-looking crosswalk is now a tasteful earth-tone checkerboard. Meanwhile, two sets of plastic bump-outs have appeared kitty-corner from each other. (The project was funded through Blue Cross/Blue Shield, the Central Corridor Funders Collaborative, and the Knight Green Line Challenge grant.) 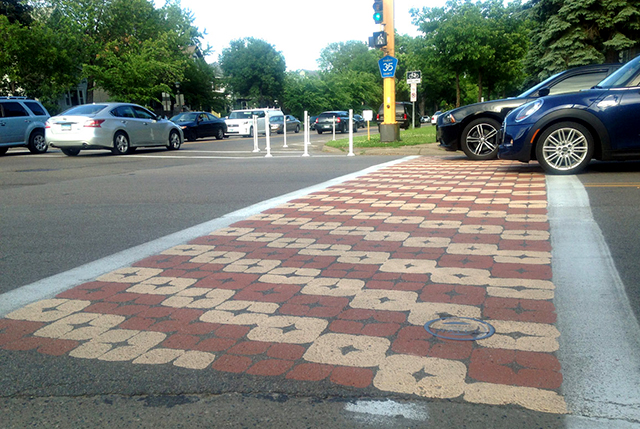 MinnPost photo by Bill Lindeke
A “creative crosswalk” at Fairview and Marshall in St. Paul.

“The crosswalk is a temporary installation,” Lilli Post Johnson, one of the Friendly Streets organizers, told me. “It’s part of a demonstration series we’re doing on Fairview. These ideas came out of the engagement we did on Fairview two summers ago, all the block parties that happened. We had 400 surveys about how to improve Fairview, and these were some of the most popular ideas to make it safer and more friendly.”

The crosswalk and bump-outs are a scaled-back version of intersection changes proposed over a year ago. [PDF] The temporary bump-out delineators (better known as “those white plastic things”) are something that has been tried before in both Minneapolis and Saint Paul at problematic corners. By “tightening” the corners, they decrease the turning radius of the street and lower the speed at which drivers feel comfortable, adding some breathing room for people on foot.

The painted crosswalk, though, is another story. As far as I know, this is the first legally sanctioned “creative crosswalk” anywhere in the Twin Cities. It’s an idea that’s been used many places elsewhere, using artistic or creative coloring to make otherwise overlooked crosswalks more distinctive. 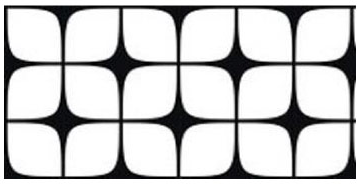 “Even with the bump-outs and crosswalk there was limitation to what we could do,” Kim Club, who worked on negotiations with city engineers, explained. “With the creative crosswalk, we got the design narrowed down to just two colors, and they had to be earth tones. That has to do with some federal regulations around crosswalks that St. Paul abides by, but other cities don’t.”

The group painted the crosswalk at 3 a.m. on a Sunday, and after years of persistent lobbying at City Hall, one of the organizers told me it felt like a huge relief.

“We bought way too much paint,” Lilly Post Johnson told me. (They bought 4 gallons.) “Hopefully we could use it in other places. We could maybe do another three crosswalks. “And hopefully there’s now a precedent, and easy pattern of two colors. We have a stencil, too, that could be utilized as well.”

Working through the process

It wasn’t easy to come to this point. There were many hurdles along the way, and in the beginning, the process seemed daunting. But as Kim Club describes it, once the neighborhood groups got involved, particularly the Mac-Grove and Union Park Councils, communication with the city and county picked up.

“This is a super proud moment because it required so much,” Club told me. “At so many points in time I could have said, ‘OK, you win. This is silly how long it’s taking to get a response.’ It was a lot of things we had to compromise on, and if I didn’t have a supportive team, if a lot of people hadn’t wanted to see this through, that crosswalk might not be there. Because it was just challenging.”

Crosswalks are a critical but ignored part of our urban fabric. (That’s one reason I talk about them so often; see also this column on crosswalks 101, or this one on St. Paul’s recent crosswalk stings.) People seem not to notice their importance until it’s too late.

The team will be conducting pedestrian counts and interviewing people walking in the area to get their feedback on how the crosswalk is working in practice. The installation is scheduled to be up through October, and they hope it’s the first of many more that might appear at dangerous corners throughout the city. 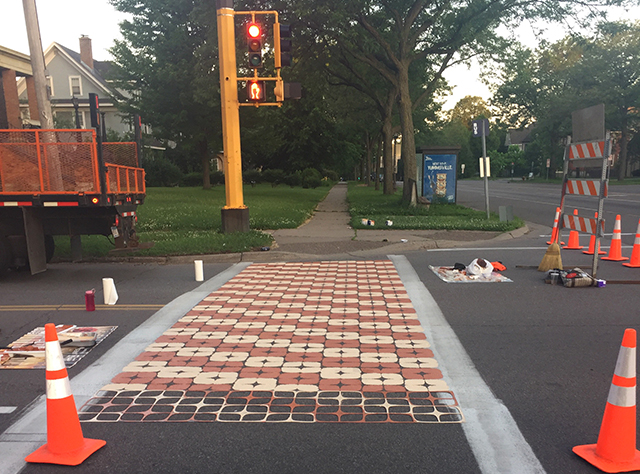 Friendly Streets
A “creative crosswalk” at Fairview and Marshall in St. Paul in progress.

Just this week, there was another fatal crash in a St. Paul crosswalk. A woman crossing the street from work was killed by a turning minivan on the East Side. There’ll be a public meeting in the area tonight (June 9) to discuss what the city and county can do to improve pedestrian safety. With three crosswalk deaths this year, and two in a month, the timing couldn’t be more critical.

“All I really care about at the end of this is people having another resource, something that’s for them and by them, that can hopefully be safer,” Kim Club told me. “I don’t want to hear about another accident, and if creative crosswalks can lead to less of those, I want the city to take that seriously. Let’s do this where it needs to be done.”