“Why can’t we have nice things?” is a common refrain in north Minneapolis, where people look down at the parks, homes, and leafy quiet of south Minneapolis’ tonier neighborhoods and rightly demand equality. Take the Midtown Greenway, the crown jewel of Minneapolis’ vaunted bicycle infrastructure. The wide bike/walk path runs along 29th Street, connecting the Chain of Lakes with the Mississippi River. It’s a world-famous amenity that has fueled an urban development boom, but like most Minneapolis trends, it sits in the city’s better-off southern half.

A few weeks ago, after years of community work, a “test greenway” was installed along a half-mile of Irving Avenue North, connecting two parks through the middle of north Minneapolis’ Jordan and Folwell neighborhoods. In today’s car-saturated city, the odd mix of traffic-calming elements seems an almost impossible feat of political experimentation. The temporary project presents its north Minneapolis neighbors with a riveting question: What kind of street do you want? What happens over the next year will offer a telling reply.

Years in the making

“I like to think of it as just a lovely stretch of street that’s closed to cars, and open to pedestrians,” northside resident Dacia Durham told me three years ago, when the greenway was just a plan on paper. “You can turn it into park space, and the hope is that it will bring neighborhoods together, especially over north. That people will make an effort to get to know their neighbors more, that’s the way I think of it.”

In 2013, Durham was working with an organization called Twin Cities Greenways, trying to get greenway-style pedestrian streets built in different neighborhoods of Minneapolis and St. Paul. Back in 2008, the group looked at a few potential choices and identified this part of north Minneapolis as an ideal place for the region’s first on-street greenway.

“It’ll be like Milwaukee Avenue, but Milwaukee is very narrow,” Matthew Hendricks, one of the group’s founders, explained at the time. “A greenway in north Minneapolis would have a much wider feel and have a little more green space.”

After years of community meetings, city permits, and funding applications, the seemingly far-fetched greenway idea got a key grant from Blue Cross/Blue Shield. Along with city, state, and federal money, today the the pipe dream has become reality.

At first glance the street looks like a jumble, but that is by design. Traveling north along the six blocks of Irving Avenue North that form the “test greenway,” you encounter a tasting menu of traffic-calming treatments.

The first is the “half-and-half,” where concrete barriers have been installed to form a one-way walkable space. Sturdy plastic picnic tables sit in the new spaces along the block, and cars slow to a fast crawl. 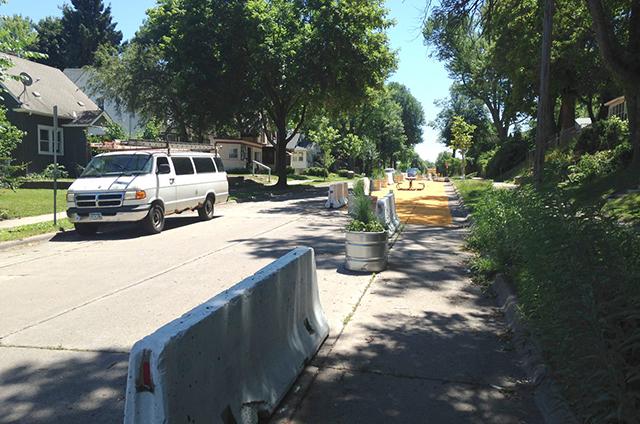 MinnPost photo by Bill Lindeke
The first section is the “half-and-half,” where concrete barriers have been installed along parts of the street to form a one-way walkable space.

“I hate it because of the parking,” Reggie Myles told me, getting into his car on his way to his job at the Embassy Suites. “Come wintertime, how are you going to park here? Who’s going to plow the alleys? This is north side, they don’t plow here.”

Myles lives on a stretch of the greenway south of Lowry Avenue, which means he can drive in only one direction down the block. But in the next breath, Myles admitted that there was an upside.

“As far as what’s good about it, this block we have a lot of kids here, kids playing in the street. So that’s good,” he said. 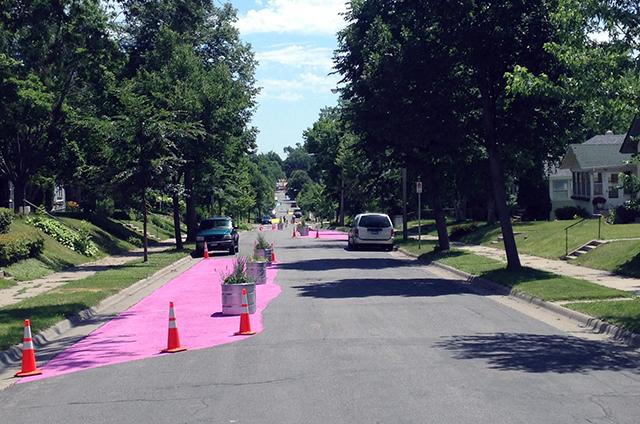 The next four blocks are the least invasive, an impromptu bicycle boulevard. Large metal planters demarcate car-free zones alternating down the east and west sides of the street. It’s what street designers refer to as a chicane, a term common in auto racing. As a result, cars slow down, and the brightly painted pavement — yellow, pink, and green — transforms Irving Avenue’s sloping hill into a surprisingly festive sight.

Another key factor of the greenway design is temporary bollard pedestrian crossings at the two of the busiest intersections, Lowry Avenue and North 33rd Street. 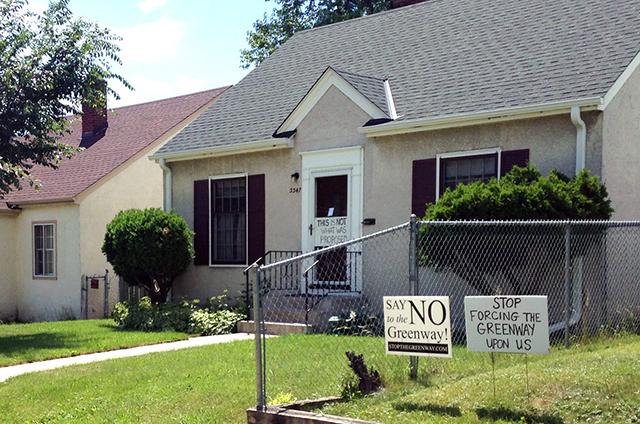 MinnPost photo by Bill Lindeke
Not everyone seems to be happy with the changes to the street.

“Do you like the colors?” Nate Pentz, a northside resident and secretary for the Northside Greenway Council, asked me earnestly. “We were going to paint it green, but then went for more color.”

As someone who has spent hours attending public meetings about on-street parking, the final stretch of the street is the most astonishing. It’s the “full greenway” treatment, a block of the street closed off to cars. A bike lane has been painted along the asphalt, weaving back and forth between the curbs. Residents needing access park around the corner or use their alleys (most homes in this part of town have always relied on alleys), though it remains possible to drive over the plastic bollards in an emergency.

Just like Milwaukee Avenue, the street itself has become a public space where people can walk, play, bike, or just hang out.

“It’s not nothing, it’s something,” one resident told me, walking her black-and-white dog up the pedestrianized block. “Some people are against, and I see where people are coming from. I like the crosswalks, especially on 33rd, because it’s a busy street and people speed.”

Because it’s a temporary test — like the recent artistic crosswalk in St. Paul, part of a trend of “pop-up” urbanism — the actual on-the-ground treatments are flexible. Pentz says that the City Council is willing to change some street details, moving bollards, a picnic table, or traffic diverters.

“If anything ever does end up taking place, there’s still a lot of process time for it to be changed, adjusted block by block,” Nate Pentz told me, making sure to describe the project as temporary. “It’s for neighbors to decide what they want.  Do they want to do a bike boulevard, a half-and-half, or a full linear greenway? There’s ability for neighbors to lead the discussion of where this goes … if it happens.”

So far, the jury is out. As with most things, some folks love it, others hate it, and most are somewhere in the middle.

“I have children, and I remember growing up in this neighborhood,” said Will Lumpkins, a local bike advocate. “I remember traversing the neighborhood and how big a deal it was having to cross a major intersection, having to worry about getting hit by a car. This kind of creates something where I can envision my son being able to have a linear pathway where he can safely traverse the north side.” 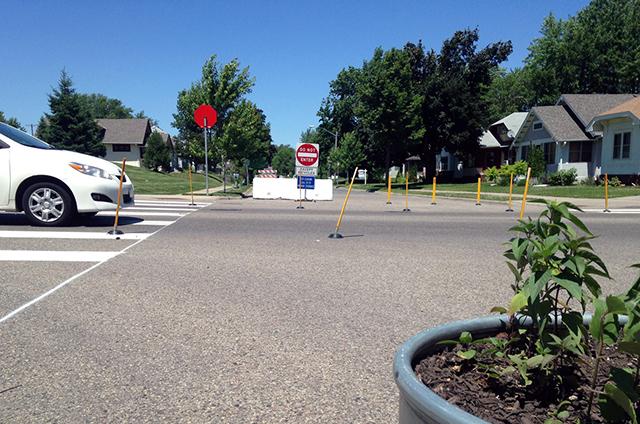 MinnPost photo by Bill Lindeke
A key factor of the greenway design is temporary bollard pedestrian crossings at the two of the busiest intersections, Lowry Avenue and North 33rd Street.

The city has placed a large message board in the streets with comment cards for neighbors to fill out. The next few months — or for however long the test greenway stays operational — will offer a flurry of community feedback. So far, neighbors are concerned about parking, access for Metro Mobility, alley and street safety, and a few other technical details.

As the project launches, the organizers are promising to work out the kinks. Yet to me, given the radical change to the street, it’s amazing that the change seems so smooth.

“It’s an opportunity for north Minneapolis to reimagine a new amenity they’d like to see for themselves,” explained Alexis Pennie, who is coordinating outreach for the Northside Greenway Council. “We’re going to get a really great investment here in the middle of north Minneapolis that helps produce a quality of life and connectivity that we don’t currently have.”

Pennie is hosting a meeting at his house on Friday for people who’d like to help with outreach. His current plans include signs, buttons, and door knocking to start conversations. (I imagine that, without the noise of speeding cars, conversations will be improved in volume, if not in tenor. And now there are picnic tables where people can sit and complain about parking in relative comfort.)

The official greenway kickoff is [update] this Sunday, an all-day event with a ribbon-cutting ceremony at 5 p.m. 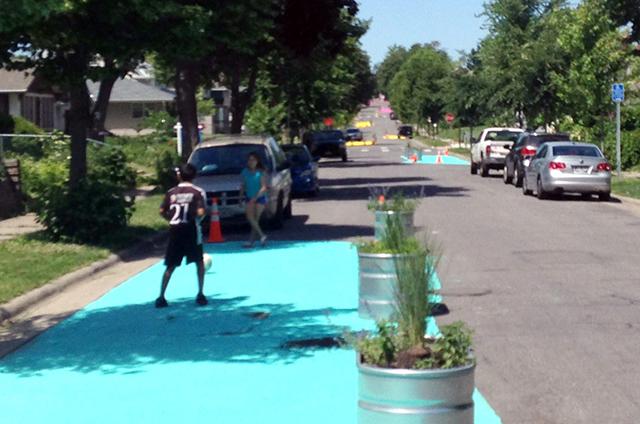 MinnPost photo by Bill Lindeke
“It’s more intimate because it links our parks and our schools,” said Will Lumpkins, comparing the north and midtown greenways.

A big chance for change

Spending time along the test greenway is an almost eerie experience, like being in an alternate universe. The one constant seems to be the kids, emerging from front doors like clockwork to run around in the newly liberated open spaces.

“My biggest takeaway is that I love the experience of walking and biking on it,” Nate Pentz agreed.  “Three or four residents who live on the greenway route temporary installation told me that they really like that kids could have places, playing in the streets and more out in the yards in general because traffic doesn’t go as fast.”

Heading down the new Irving Avenue, I was surprised to look up and see a friend’s old house on the corner. Years ago I had spent an entire day cleaning up his yard after a destructive tornado had swept through the neighborhood, knocking down trees like dominoes. Five years later, the replacement maples still look scrawny, though the sidewalks have been repaired.

Pausing at the corner, I watched a school bus negotiate the painted chicanes, stopping to let off a young man in a white T-shirt. Further down the street, a couple sat in the shade on their stoop as two kids popped out from a house to kick a soccer ball back and forth between the flower planters. A block away, a police car idled, an officer gazing off into the distance at something ineffable. In the next block, a pickup basketball game had broken out in the very place where I’d almost seen a fistfight a half-hour earlier.

If it works, the new greenway will change the neighborhood even more than the tornado did, dramatically shifting how the street functions for people living here. Today’s Irving Avenue has been quieted down and opened up to let a hundred new activities flourish. The greenway won’t solve the neighborhood’s problems by itself, but watching kids playing in the street, it’s almost impossible not to fill with hope for the future.

Temporary greenway tests out a possible future for north Minneapolis