Even in a city as historically minded as St. Paul, some traces of the past can be hard to find. Certain narratives jump to the fore and get reinforced again and again, while others seem to fade away, are pushed to the margins or lost in time.

For the next few months, visual artist Kit Leffler will be embarking on an artistic treasure hunt to trace some of the Twin Cities’ oldest European history, the path of the Red River ox-cart trails that once connected St. Paul to settlements along the Canadian border. As part of a residency program, she’ll be leading a series of tours to find and represent the path of the trail from downtown St. Paul to Fridley, uncovering clues of the route and unearthing a few shards of history that lie underneath today’s urban landscape.

Leffler, originally from Kansas City, is an artist whose visual work often focuses on scientific or historical themes. Earlier this year, she became one of two artists-in-residence at the Banfill-Locke Center for the Arts in Fridley, a nonprofit community art center sited in an 1840s-era tavern on the Mississippi River north of Minneapolis. While brainstorming possible projects for her residency show, Leffler happened across a historical maker about how the spot had been a waypoint along the Red River Ox-Cart Trail. “The Banfill house was a hotel on the Red River Ox-Cart Trail,” Leffler explained to me. “It was one of the earliest places for people to stop while they were emigrating along the trail to and from the Selkirk settlement. I became interested in that, and then in mapping the geological land survey maps to contemporary city street maps.”

As she dove into the historical rabbit hole, her project, titled “Double Back: A series of Red River Trail Revival Walking and Drawing Tours,” was born. Over the summer, Leffler will lead four tours of the historic route through St. Paul, Minneapolis, and Fridley, culminating in a show at the Banfill-Locke Center. Rather than a strict historical resurrection of the trail, the project is intended as a learning experience, an attempt to create a historical and artistic narrative that balances on the unclear line between the past and present.

“I’m most interested in making my own maps,” Leffler explained. They’ll be part historical document and part mythological, in that you don’t really know for sure.”

A history of the Red River trails

Like Leffler, I’d never thought much about ox carts as being a key part of Minnesota history. It turns out that when Minnesota was Indian country, back in the young days of Fort Snelling and St. Paul, the bulk of the territory’s European population was located not in the current Twin Cities area, but far to the north in settlements along the Red River.

The earliest of these, dating back to 1820, was a small agricultural colony started by a Scottish nobleman named Selkirk, who somehow persuaded emigrants, mostly Scottish and Swiss, to move to what was then the middle of nowhere for a European. 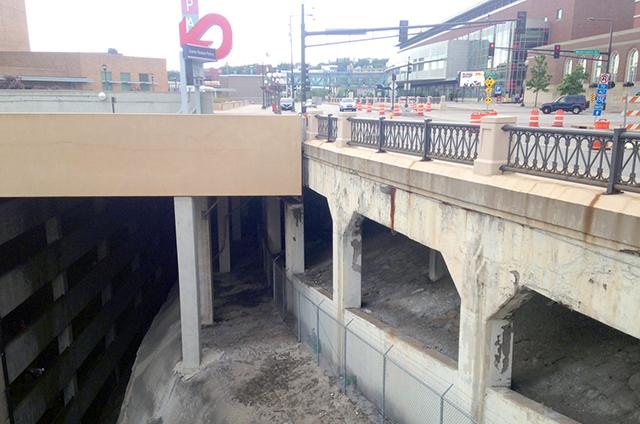 MinnPost photo by Bill Lindeke
The caves and bluffs underneath Kellogg Boulevard, which used to be Third Street back in the ox-cart days, were the beginnings of the Red River Trail.

“Selkirk was a Scottish lord, and after the Jacobite rebellion he wanted displaced Scottish farmers to have somewhere to go,” Leffler explained to me as we climbed up Kellogg Bouelvard, the first leg of the old ox-cart path. “He began setting up different colonies in Canada near where the Hudson Bay company was operating — including the Red River Colony, which is where the Red River began by current-day Winnipeg, then called Assinoboine.”

As Leffler describes the story, the Red River trails linked the north-flowing Red River watershed with the south-flowing Mississippi River waterway. But its history is surprisingly complex, and digging into the details uncovers a half-century of micro politics and uncomfortable histories.

“The Dakota and Ojibwe people weren’t terribly pleased with the Red River settlers being there, and the Hudson Bay Company wasn’t terribly pleased with them being there, so they ran into a lot of difficulties,” Leffler explained. “There are so many overlapping stories with different European and American countries wanting power, and different native tribes losing power, and people passing treaties and not necessarily communicating with each other. It’s kind of hard to figure out how it all falls together.” 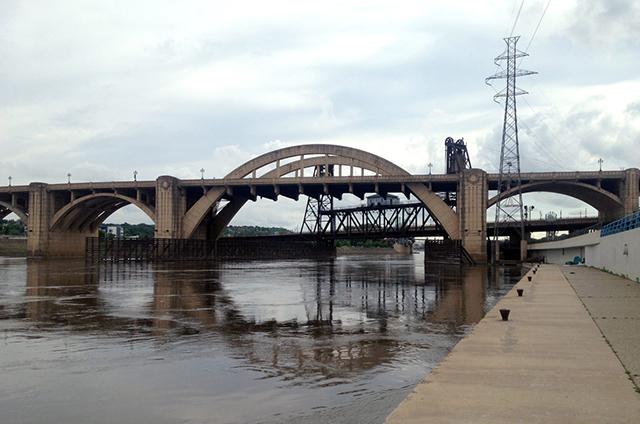 MinnPost photo by Bill Lindeke
Lambert’s landing in St. P​aul’s Lowertown was once filled with steamboats.

Walking along the path now, from the Lowertown (“Lambert’s”) landing up past the St. Paul Cathedral and across the historic Rondo neighborhood, it’s strange to try to imagine hundreds of ox carts following a well-trodden path through fields and woods. As Leffler describes it, ox carts themselves were quite a sight.

“It was pretty uncomfortable,” Leffler told me. “The actual ox cart was two wheels and a yoke, but there wasn’t a specific design. They had a basic plan, but each person would make them in totally different ways.” 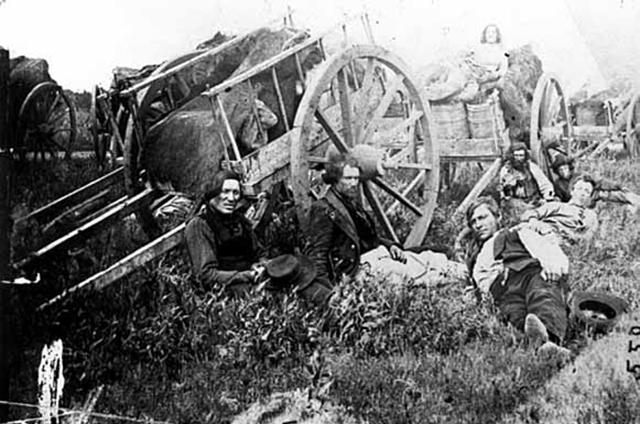 Courtesy of the Minnesota Historical Society
Ox-cart drivers resting along the way.

As the northern Red River trade grew, primarily around the growing Métis city of Pembina, but also through new trade routes for the Hudson’s Bay company, ox-cart trails became longer and more frequent into the 1850s and 1860s. There was more than one trail to the Red River settlements, and different teams of cart drivers would choose different routes depending on the weather, relations with Indian tribes, or the specifics of the trade involved. Imagining how rough each river crossing might have been, or the paths through the mud, it seems like a grueling journey.

“The wheels weren’t completely round; they were mostly rounded,” Leffler explained. “You’d make new ox-cart parts with trees along the way, because they were constantly breaking. You’d sit in front on top of a pile of furs and the ox would go in front. But most people would walk alongside. You’d just be walking that whole way.”

St. Paul was a common destination, though the stretch that centers on Leffler’s project, according to contemporary accounts, was viewed by the Métis drovers as something like the proverbial “wretched hive of scum and villainy.” Here’s my favorite quote from “The Red River Trails,” a Historical Society book that quotes an 1847 account by a Métis man named Robert Clouston:

[St. Paul] is a wretched little village consisting of [a] few scattered houses stuck here and there and on the top of a steep bank almost overhanging the Mississippi: almost every house is either a shop or a ‘grocery’ [i.e. tavern] … and certainly, a grocery keeper cannot complain that he had no patronage for, drinking whisky seems to occupy at least half the time of the worthy citizens of St. Paul’s while the ‘balance’ of their time is employed in cheating each other or imposing upon strangers … [Saint Paul-ites] seem an indolent, lazy, worthless class of men.

As a result, many of the Red River ox-cart trails would often gather at the midpoint between Minneapolis and St. Paul while waiting for their trade goods, around a nonextant lake called Larpenteur’s Lake near the present-day corner of Marshall and Dale, or at a waypoint run by an innkeeper named Desnoyer, near present-day Desnoyer Park. (For the record, the ox-cart path went a half mile south of the Territorial Road described in Andy Sturdevant’s MinnPost piece on Territorial Alley.) 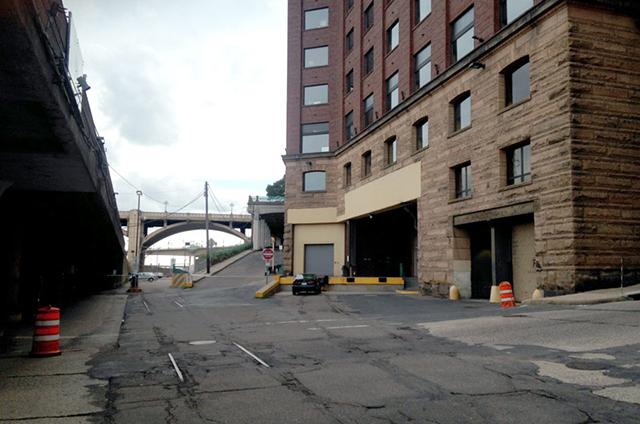 MinnPost photo by Bill Lindeke
The corner of Second and Sibley in downtown St. Paul. According to Leffler, there was a tavern on this spot in the Red River Trail era.

Leffler’s vision for the project is to “inspire participants to consider the contemporary and historical relationship between commuter culture and community.” Instead of a strict history tour, the resulting work will reflect the way that history becomes muddled along the narratives that form our contemporary landscape.

“I’m interested in creating my own narrative around history, instead of filling the history as the narrative,” Leffler explained to me. “We’ll end the fourth tour at Banfill-Locke, and after the tour, I’ll take all the information that I’ve gathered, the perspective I’ve formed, and create a new body of work inspired by the experience.”

Leffler will be spending the summer reading through history books, and recently picked up Mary Lethert Wingerd’s “North Country,” the magnum opus on the politics and cultural struggles leading up to the Dakota War of 1862. The first of the walking tours is this Saturday at 4 p.m., meeting in front of the St. Paul Union Depot. If you attend, bring your inner ox cart.

Tracing the missing stories of the Red River Ox-Cart Trail