In college 20 years ago, I abandoned a bicycle. I was young, and on occasional pensive moments I look back with regret. It was the mountain bike on which I learned to ride: nothing fancy — an 18-speed, I think. For some reason that summer, stuck in a tiny college town, I just left it outside the music building. It was years until I thought about it again.

It turns out that lots of people abandon bicycles, especially the young and the poor. They collect at a few choke points, and the swells of unpeopled bikes can form a logistical headache. But when examined, the system of recycling, returning, and reusing bicycles becomes strangely fascinating.

The end of the college beater

By the numbers, the University of Minnesota remains the epicenter of the Twin Cities’ bike scene. It’s also the place where crappy bicycles are constantly abandoned. It’s not uncommon to see rusty wheels poking from a crusty gray snowbank. 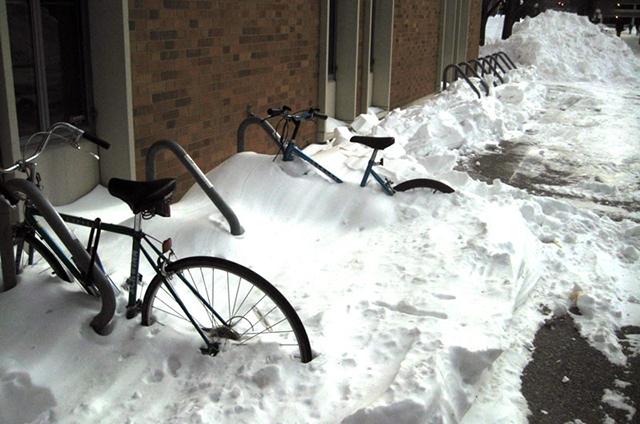 MinnPost photo by Bill Lindeke
Seems like maybe these bikes haven’t been ridden in a while.

In the summer, the university’s bike racks fill with beater bikes whose parts slowly evaporate. First a wheel, a seat, and then the entire fork disappears until there’s nothing left but a sorry frame and a chain rusting on the sidewalk in the rain.

“Well, we tag ’em,” Steve Sanders told me. Sanders, the university’s alternative transportation manager, is a 30-year veteran who coordinates the school’s bicycling network. Every few months, Sanders and his team sweep campus racks looking for signs of neglect. 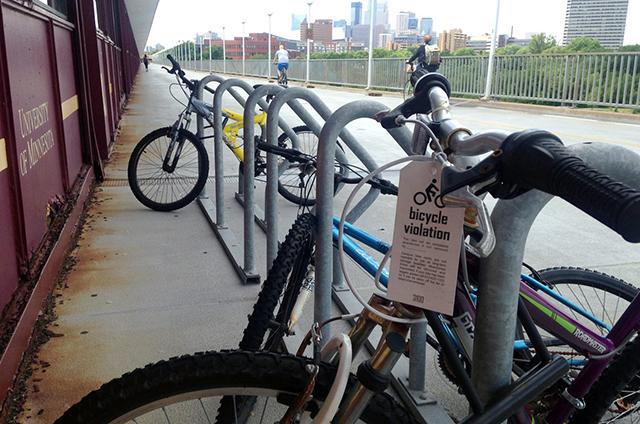 “There’s a date on the tag of a bike saying that it’s considered abandoned,” Sanders explained. “Then if it’s not removed by such and such a date, we’ll come and remove them. We’re required by policy to hold them for 30 days, and we can dispose of them as we wish. Typically we hold them for longer than 30 days to give people more of a chance to get them back.”

Here’s the system. Over a week or so, a team of workers inspects all the campus bike racks and looks for telltale signs of an abandoned bike: flat tires, a dusty frame, or brakes that don’t work. The bike gets tagged with a date and logged into the system. After a month or two, they return with a pickup and an angle grinder and collect the bike. (These days, the university also marks the rear tire with some yellow paint, because vigilante students like to rip the tags off.)

The resulting harvest is a blend of two-wheeled detritus: Magnas, Huffys, Murrays and cheap Schwinns. (Every once in a while you’ll get a nicer bike thrown into the mix, a decent Trek mountain bike or — Sanders’ favorite — an old 10-speed.)

One problem is that college students are not known for meticulous bicycle maintenance.

“If we tagged every bike with a rusted chain on campus, we’d be tagging 5,000 bikes a year,” Sanders told me. “So we test the brakes. Do the brakes still work? If it’s covered in cobwebs and dust and has taco wheels, we’ll tag it. It has to be more than just a rusty chain and a flat tire.”

Sanders guesses they’ll collect about 500 bikes this year, but because of the massive complexity of the 40,000-student campus, some bikes fall through the cracks. (When I asked him about the all-time longest abandoned bike, Sanders guessed that the record might be five or six years.)

They’re always tweaking the system to hit the sweet spot between clearing too many and too few bicycles. Compared to the U of M, other schools (like Michigan State or University of California-Davis) have a stricter bike registration or cleanup policy. Here, too, U of M policy used to require students around every dorm to remove their bikes completely for a week or two. But as bicycling has become mainstream, the policy has grown more tolerant.

“For all the bikes that we remove, we get very few calls, under 10 a year,” Sanders said. “I think we’re getting the right ones, and we’re probably not hard enough on the abandoned bikes when we’re tagging these things.”

Eventually all the bikes end up in an unmarked concrete room at the back of a parking garage on the university’s West Bank. These days the room isn’t quite full, but in a few weeks, once the summer sweeps begin, the room will quickly fill up. 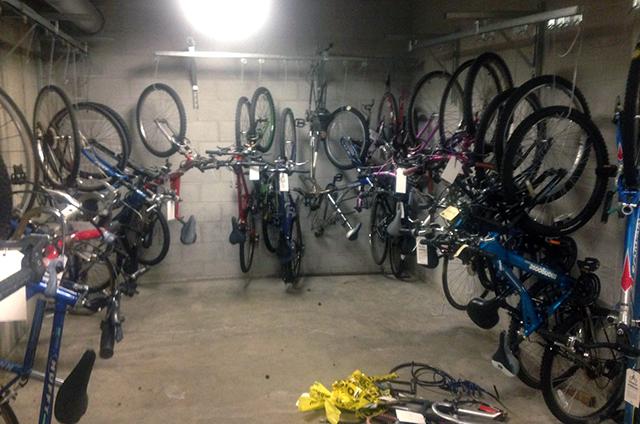 MinnPost photo by Bill Lindeke
Eventually all the bikes end up in an unmarked concrete room.

With the constant cycling of students through the university system, around campus, and through the academic calendar, the bike collection process seems Sisyphean. As soon as the team finishes collecting bikes, someone will call to complain about a new bike missing a wheel or two, another rusty dime-store ride loitering beside the dean’s office. The war with entropy never ends.

Across town at Metro Transit’s North Minneapolis headquarters, a similar story plays out as, each year, hundreds of bikes are left behind on the city’s buses and trains.

“This is just a week’s worth, and it’s not even warm yet,” Pam Steffen told me back in April. She’s the manager of customer relations, who coordinates Lost & Found for the agency. “This winter was so warm that we really didn’t slow down much. The past couple years, we’ve had to rent bike racks because we’re out of room already.”

The bikes themselves sit inside the vast understory of the Heywood Garage bus barn — one of the system’s five bus storage facilities. Tucked behind the rows of silent buses awaiting their rounds, a rack of left-behind bikes pushes up against a concrete wall. But unlike the University of Minnesota lost bikes, these rides are often reunited with their owners. 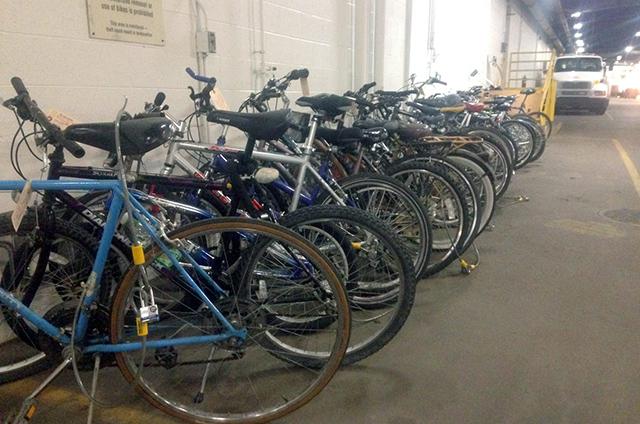 MinnPost photo by Bill Lindeke
Tucked behind the rows of silent buses awaiting their rounds, a rack of left-behind bikes sits along the concrete wall.

“Bicyclists can also meet back up with the bus after it turns around,” Steffen explained. “About 50 percent of the bikes left behind are picked back up by their owners. We have a high claim rate. For miscellaneous items like bike locks, mittens, or hats, only 15-20 percent are returned. It’s a lot lower.”

It’s not just bikes, of course. Metro Transit has an extensive system in place to help reunite forgetful travelers with all kinds of missing matter. Because of their size, they can only keep bicycles around for a week. But they can often hold on to smaller things for a little longer.

In between the desks and cubes of the Metro Transit customer service team, you’ll find the Lost & Found room. It’s smaller than you think (I’d imagined something like the warehouse vault at the end of “Raiders of the Lost Ark”). Anyone can either call Metro Transit (612-373-3333) or show up to the window during business hours.

“Every morning, there’s a courier that drops off items,” Steffen explained, pointing to the room’s various shelves. “That shelf over there is items lost yesterday, and everybody is going to be calling today for yesterday’s stuff. At the end of the night we move those items to our will-call shelves once they’re all categorized.” 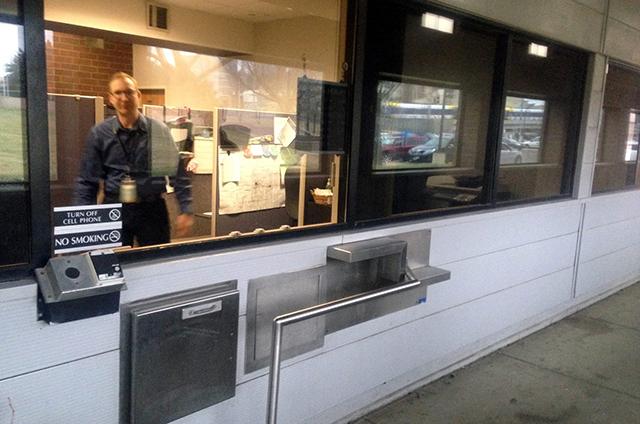 The result is an elaborate system of bins where even the cell phones are categorized according to brand. (If someone calls about a lost phone, they have to prove it’s theirs by going through some of the contacts.) The most common items are black umbrellas and black gloves. 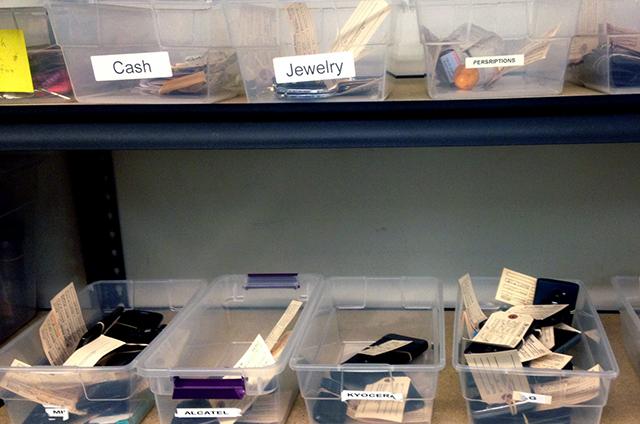 Bus drivers get first claim on anything that is never picked up. Steffen told me that some like to hold on to surplus umbrellas; some drivers hand them out during rainstorms. 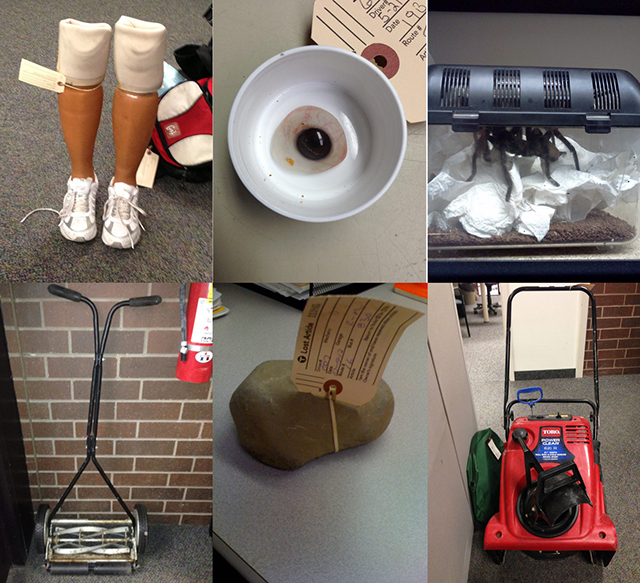 Looking back, moving on

With summer in full swing, abandoned-bike season is at its peak. Everyone seems to be out there, dusting off the bike in their garage, or leaving their Magna behind.

In retrospect, I wish I’d held on to my old college bike. It would have been nice to have around, a flexible bike to lend to visiting friends or to gaze at nostalgically. But if I were going to abandon a bike, it’s nice to know that somehow, somewhere, people like Sanders and Steffen are around to pick it up.