Every bicyclist knows the feeling of rolling up to a destination and finding a bad rack. Stranded and forced to make do with whatever’s around, you grudgingly lock to a pole, a fence, or (the worst case scenario) a young tree. It happens all the time, and especially at popular events, can make parking your bike into a chaotic free-for-all.

It’s ironic because bike parking is so cheap. While the average car parking-space costs start at around $10,000 per space and escalates quickly, good bike parking might cost about $100 and use a fraction of the real estate. So how can something so simple go so awry?

These days, things are beginning to change, especially for bicycling attractions like stadiums and breweries. In cities like Minneapolis, businesses and destinations are starting to pay attention to the basics of bike parking and seeing the benefits of well-designed racks.

For years, when Nick Mason hasn’t been able to find the bike parking at an office or businesses, he’s followed one very simple rule.

“I go and I find the dumpster, and that’s where the bike parking is,” Mason told me. “It sounds silly, but it’s true a very sad amount of the time. The dumpster is out of sight and out of mind. The bike parking is not convenient, not by a door, just put wherever we happen to have some little bit of space.”

Mason is the deputy director of the Bike Alliance of Minnesota, and literally helped write the manual on bike parking. (The book is about 100 pages long, believe it or not.) He filled me in on some common mistakes: putting racks too close to walls, not attaching them to anything, using old-fashioned designs ill-suited for modern bikes, or placing them far from doorways. 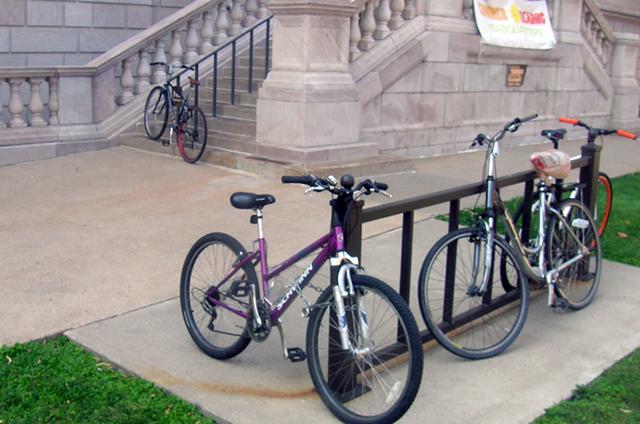 “We have general guidelines so that bike parking meets a minimum set of standards,” Mason said. “You want a bike rack that parks a reasonable percentage of bikes for your business, and to install them in a place as convenient as the most convenient car parking space. It’s pretty simple.”

But bike parking is easier said than done, especially in the cities where accommodating bicycling is often a low priority. 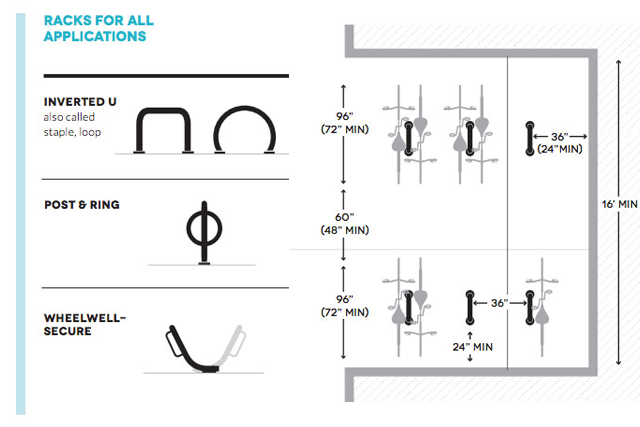 Assciation of Pedestrain and Bicycle Professionals bike parking Guidelines
Some of the guidelines for bike racks.

“I know it when I see it,” Mike Sonn, who co-chairs the Saint Paul Bicycle Coalition, explained when asked about good bike parking. Like Mason’s dumpster rule, Sonn often finds himself using what he calls the “St. Paul bike rack.”

“The ‘St. Paul bike rack’ is the gas meter, just a metal guard around a gas meter,” Sonn joked. “So you’re almost guaranteed at least one bike rack, and I just kind of laugh to myself. But it makes you feel like you’re an afterthought, because it was never meant for that use.” 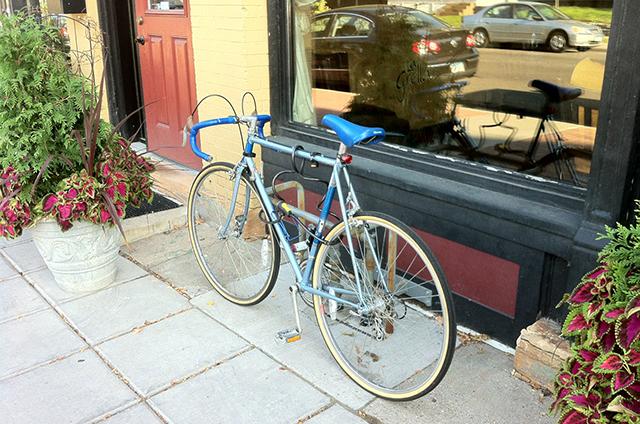 If anywhere should have great bike parking, it’s a Minneapolis brewery, where bicyclists flock to craft beer like bees to flowerbeds. For the most part, local breweries have some of the best bike parking around. And nobody’s racks are more impressive than the ones at Surly, the giant “destination brewery” that opened up over a year ago right along a well-used bike path.

“It’s amazing,” Mason said, of the Surly parking situation. “That’s how it should be. And they’ve even had to add event parking. Because they’ve done such a good job finding a location and designing an end-of-trip facility, now they have hundreds of regular permanent stalls, and in season have added all this temporary parking to keep up with demand.” 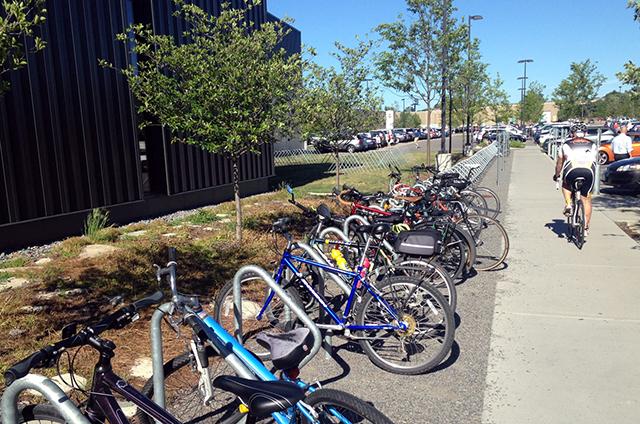 Not every brewery has such foresight. When Northeast Minneapolis’ Sociable Cider Werks first opened up in 2014, they had terrible bike parking and people often just left bikes on the ground. Most businesses end up using trial and error to fix their problems, and two years later, Sociable has great bike parking.

Some notable St. Paul bike parking misfires: At Bad Weather Brewery the rack was placed in a far corner of the parking lot, was hit by a car, and was removed; the remodeled Union Depot took a few tries before the racks were placed far enough from the wall to be entirely useful; and the Central Library‘s “historic” bike racks are too thick and too high off the ground. 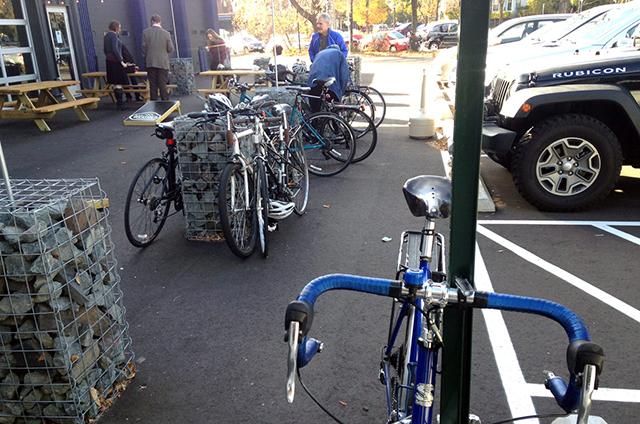 With tens of thousands of fans, designing for stadiums raises the bike-parking stakes yet again. Over the last few weeks, it’s been interesting to watch the purple football-shaped bike parking around the Vikings start to appear.

“The stadium is multimodal,” Mason said. “If we want people to use all these different modes to get there, you have to think about the main bicycling routes. Let’s put bike parking, signage, and wayfinding for how to access that parking on all the major points. The Twins have done that, eventually. They figured out that they needed more after they opened, and the Vikings have definitely done that by having bike racks in the line-of-sight to bike lanes on 4th, 11th, and on the Hiawatha Trail.” 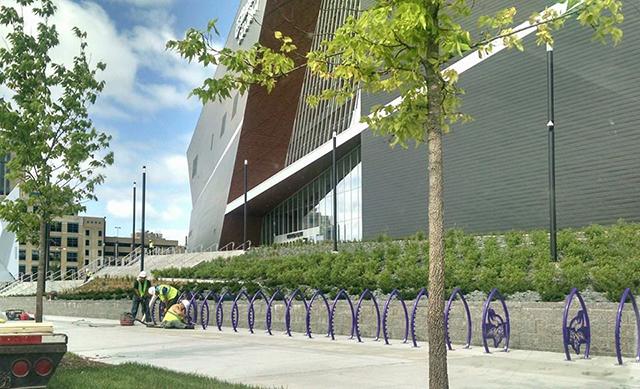 Courtesy of Nick Mason
It’s been interesting to watch the purple football-shaped bike parking around the Vikings start to appear.

With stadiums, the bike parking numbers can become so large that a lot of space is required. For example, in planning for the soccer stadium in St. Paul’s Midway area, team and city staff are projecting that about 2 percent of the fans will arrive by bicycle. With a 20,000-seat stadium, that’s 420 parking spaces for bicycles, but where those will be placed is still up in the air.

“I would rather see the bike parking in one central area at the soccer stadium,” Sonn told me. “If Pascal Street is a bike route, I want to see a ton of bike parking on the Pascal side. But I don’t want the other entrances to be ignored; I’d like to see some bike racks at each.”

According to a St. Paul Public Works spokesperson, architects and city staff are reviewing comments on bicycling projections and parking need. They might heed Mason’s warning that, “in Minneapolis, unsurprisingly, our demand is often at the higher end.”

According to both Mason and Sonn, as bicycling becomes more mainstream in the future, more businesses and offices are going to have to take bike parking seriously. Even stadiums might have to up their game if bicycling grows beyond the capacity of current racks. One of Mason’s ideas is to popularize “bike valet” systems like the one employed during the Minnesota State Fair.

“In Minnesota we’ve not had a longstanding mainstreaming of bike valet,” Mason said. “But in other cycling cities, bike valet is a big thing at events and somewhat at stadiums. I can think of Boston, D.C., San Diego, and a number of others.”

In a valet system, bicyclists would ride up to a specific spot, leave their bike in a secured spot, and get a ticket. After the event, they’d come collect their bikes and be on their way.

The payoff for businesses, cities, and event venues would be a lot less hassle over the intractable problem of parking people’s cars. As Sonn told me, “Bike parking takes up way less space, and you can fit 12 bikes in a space for one car.”

(It’s true. Some friends once fit 15 bicycles into one car parking space at a St. Louis Park Olive Garden, just to prove the concept.)

These days, bike parking might seem like a funny, minor thing. But given the incessant handwringing over parking lots just about everywhere in the Twin Cities, good racks could solve a lot of problems.

“The thing about bike parking is that is if you do it well, like Surly, you’re going to have the problem where you can’t keep up with demand,” Mason said. “That’s a problem we want, because bike parking is a lot more cost- and space-efficient than parking for automobiles.”

If the ultra-popular Surly brewery is any guide, the future of bike parking is bright indeed.

Bike parking: How can something so simple go so wrong?