A year or two ago, after publishing another column on St. Paul, I received a social media corrective from a dogged neighborhood crank. I had said something about the city and referred to its supposed slogan as “the capitol city.”

“It’s the capital city,” the comment read. “Get it right.”

Most internet comments are to me as rain to a tropical hippo, rarely remembered. (The excellent comments here at MinnPost are the exception, naturally.) But this one stuck with me: Was it “capital city” or “capitol city”? And if so, why?

After some digging, the answer remains cloudy. One thing’s for sure, the motto is boring. But thinking through both its murky origins and how it’s used today can be surprisingly interesting.

First off, the homonyms “capital” and “capitol” have a common origin. Here’s what the very thorough Word Detective blog says on the topic:

The ultimate root of both “capital” and “capitol” is … the Latin “caput,” meaning “head.” “Capitol” with an “o” first appeared in English in the 14th century, derived directly from the Latin word “capitolium” (a derivative of “caput”) which dates all the way back to the Roman Empire. The Capitolium was the most important temple in Imperial Rome, dedicated to Jupiter Optimus Maximus (the patron god of the Roman Empire) and located at the summit of the Capitoline Hill. While Jupiter was definitely the “head deity” in town, the temple took its name from its location at the top, or “head,” of the hill. When “capitol” entered English, it was used both in reference to the original Capitolium in Ancient Rome and, more generally, any citadel, castle, etc., at the “head” of a hill. The use of “capitol” to mean a legislative building is an American invention, most likely tied to our historic fondness for Roman architecture in such buildings. “Capitol” was first applied to the legislative chambers in Washington, D.C., by Thomas Jefferson in 1793.

As I understand it, capitol with an “o” only refers to a specific building, and the national Capitol must be capitalized but state capitol buildings remain lowercase — at least that’s what Dictionary.com says. However, The Associated Press Stylebook, which MinnPost uses as its authority on style, specifies uppercase “C” for both national and state legislative buildings.

Capital with an “a,” on the other hand, is far more complex. It can mean either the top of a columnar pillar, something which is important (picture a 19th-century British twit saying, “Capital! Capital!”), an uppercase letter or, importantly for our purposes, the city in which the capitol (or Capitol) is located. There is also, of course, the concept of capital as used in the term “capitalism,” as popularized by Adam Smith and codified by Karl Marx, who, writing in German, spelled it with an always-capitalized “K.” In graduate school, I read thousands of pages on the nature, origin, and limits of capital, where the term refers to either property, money, the means of production, or the concept of value itself as it circulates and transforms its conditions of becoming. (For more on this, go to any university library.)

Needless to say, this is confusing. 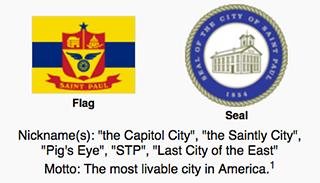 In St. Paul it becomes even more confusing. On the city’s Wikipedia page, it lists the city motto as “the capitol city,” which is the origin of my original error, but could mean a city that was very proud of its state Capitol building. On the other hand, if the city slogan is simply “the capital city,” this could either simply mean the city is the state capital (a very boring motto indeed!) or it could refer to a city with a lot of capital, in the sense of economic power. Alternatively, and highly unlikely, it could be something silly like a city festooned with elaborately topped columns (e.g. ionic, doric, Corinthian, etc.).

So which is it?

I turned to the secret St. Paul archives at the Minnesota Historical Society Library, where Patrick Coleman, a senior curator (and brother of the mayor) was happy to show me around.

“I pulled a couple of books here,” Coleman said. “The Chamber of Commerce seems to be in charge of our mottos, like ‘The Commercial Emporium.’ We’ve got nine shelves of stuff like this with the city fathers promoting the place and changing our mottos. The current motto seems to be ‘most livable city.’ ”

Paging through the archives, you see all kinds of sloganeering. Coleman’s favorite, “Saint Paul: Queen City of the Northwest,” offers a notable example of branding used in the city’s promotional guide from the famous 1893 Columbian Exposition in Chicago. (Sadly for Coleman, the motto did not take; I don’t care for it myself.)

Other St. Paul slogans run a gamut of boosterist themes: “Commercial Emporium of the Northwest,” “the home market of the great northwest,” or “The Star City of the North Star State.” And finally, on a 1904 annual report of the Chamber or Commerce, “the capital city.” 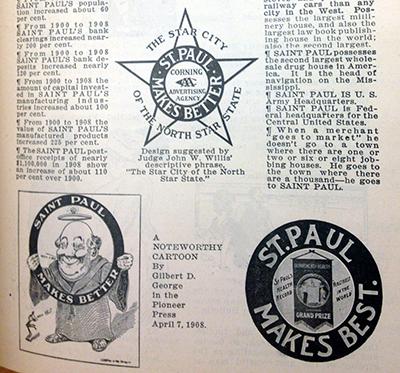 “If you want to trace it back, to me I think it’s all about business,” Coleman said. “It’s not unique to St. Paul, but all of the 19th-century stuff is about promoting the economy of the area. And you can tell that by in this time period, [pointing to a factory illustration] there isn’t a smokestack that isn’t belching black smoke. And that’s a good thing in that time period.”

Paging through the century-old guides, pamphlets, and plat maps is fascinating. It seems clear that efforts to brand the city as a center of commerce were at the forefront of many people’s minds. St. Paul was the “capital city,” meaning the best place for investment, a center of business and capitalism. That said, in 1904, the brand-new Capitol building had finally opened, and it’s safe to say that “Capitol city” would have offered an attractive image for some.

In actual usage, St. Paul’s slogan dons different guises. For one thing, the phrase appears on every small teal sign along main streets crossing the city border. Here you’ll find the phrase, “the Capital City” underneath a picture of the state Capitol, which makes a clear case for Occam’s razor: the motto simply refers to St. Paul’s status as the state capital. (Though why both “C’s” are capitalized while the “t” remains lowercase is curious.) 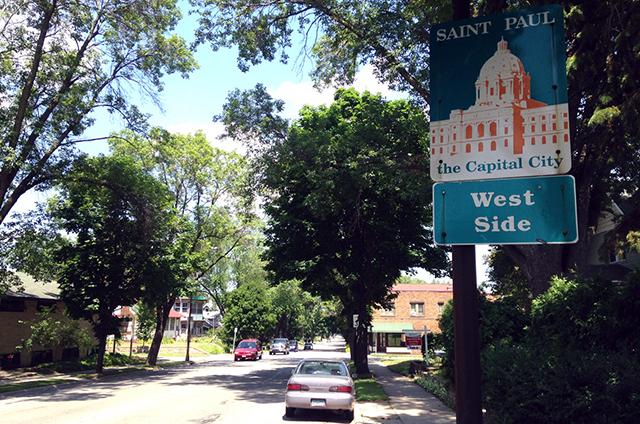 So too with the iron sewer covers, where CAPITAL CITY is cast in all caps below the city’s well-designed logo. 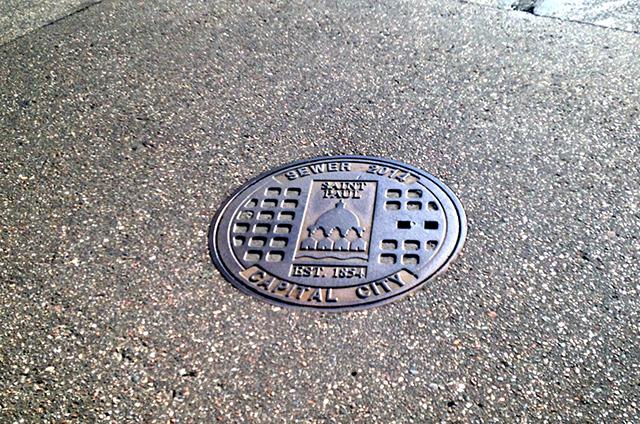 Unofficially, it’s not so clear. Apart from the Wikipedia page, some businesses continue to spell capital with an ‘o,’ such as Capitol City Station, in Highland just off Shepard Road. Meanwhile, it’s “Capitol Barbers” but “Capital Grille” (part of a D.C.-based steakhouse chain, in Minneapolis anyway, and therefore irrelevant to this conversation). 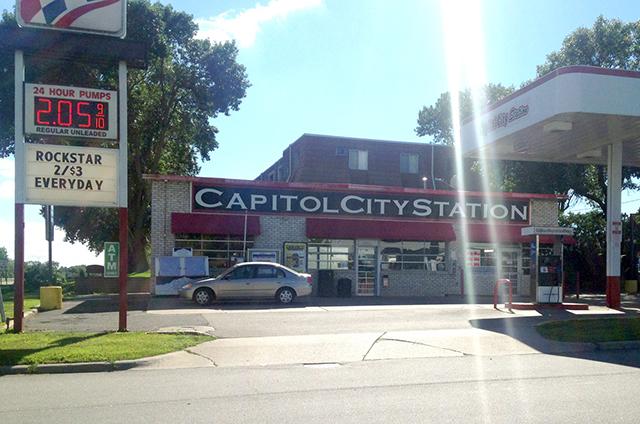 Making matters worse are the faded remains of the Capitol Heights neighborhood, as profiled by Stroll columnist Andy Sturdevant a year ago. Here, the reference is surely aimed at the nearby Capitol building. Yet because the neighborhood itself is older than the building, and was formerly known as the “Central Park” neighborhood, I suspect the area was a victim of early 20th-century real-estate rebranding. (See also, East Town.)

Finally, there’s the curious case of Capitol City Meats, a butcher shop which, before it closed five years ago, was located very close to the state Capitol building on Rice Street. On the Yelp page, it is spelled with an “a”; in the newspaper, it’s with an “o.” Alas, two hand-printed signs dating to the shop closing are also spelled differently.

MinnPost photo by Bill Lindeke
Two signs about the closing of the Capital / Capitol City Meats butcher shop in 2011.

Someone should update the Wikipedia page, but it’s not going to be me.

A Minnesota task force on policing recommended 28 reforms for deadly-force incidents. After George Floyd, will its report get a serious look?