With Hennepin Avenue buried by concrete and construction signs, these days it can be hard to find the entrance of the Walker Art Center. The sidewalk is gone, and the Sculpture Garden is noticeably absent. Only Claes Oldenburg and Coosje van Bruggen’s famous Spoonbridge and Cherry sits slyly amid the piles of earth. A wooden walkway bridges the scaffolding surrounding the obscured entrance, while the hillside has been fenced off. The effect is disconcerting.

But inside the museum, in a small basement room, a building of a different kind is rising. The project is called Paper City; it’s a monthlong collective construction session meant to break down divisions between theory and practice, architecture and play. And as street and building construction threatens to overwhelm the Walker Art Center, the grass-roots design experiment will give museum visitors a chance to collaborate, create, and play around with form while building an ephemeral dream city.

“It’s coming out of the construction aspect of what’s going on around the Walker,” Frannie Kuhs, the Walker’s family program coordinator, told me. “There’s really no lobby space where people can hang out. We knew that it was going to be difficult to navigate the building. And there’s no place to have any interaction with a project, and so I was looking for something that would relate to construction engaging the audience in a fun way.” 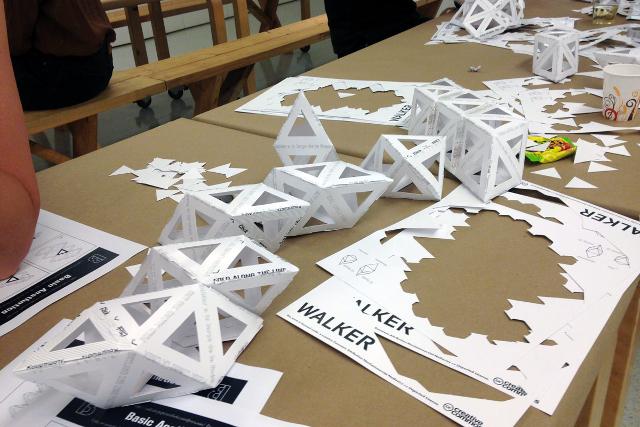 MinnPost photo by Bill Lindeke
In a small basement room, a building of a different kind is rising.

The Paper City project stems from the mind of Rotterdam-based architect Noa Haim, and it’s the first time the paper construction technique — what Haim calls “Collective Paper Aesthetics” — will be shown in the United States.

“We live in a world which is planned and controlled. And in a way made, if I’m not mistaken, by eight to 16 different types of construction products,” Haim told me. “In my project, we ask the people to come and to build their own big model so they can feel a bit like the architect or planner.”

Haim, who was born in Israel, started mapping out different ’70s-era kibbutz buildings in an attempt to better understand the evolution of the DIY structures that housed the agricultural collectives. From there, her interest in formal construction and pattern repetition took off. Haim’s paper construction was an experiment, back in 2008, at the London Festival of Architecture. Since then, the project has been reproduced and re-enacted all over the world. (This is the first time it’s coming to the United States.) 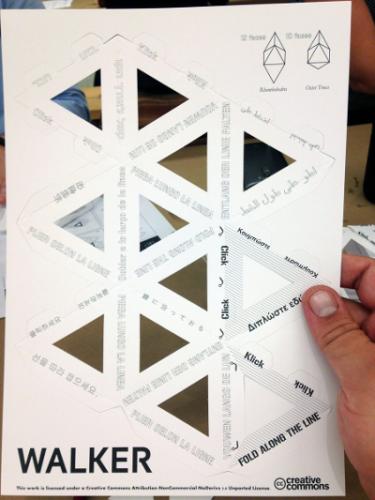 Courtesy of Noa Haim
Paper City is simply sheets of paper that can be detached, folded, and fixed into a seemingly infinite variety of modular constructions.

“There’s something very powerful in models,” Haim said, explaining the theory behind the paper practice. “I think architecture projects are more powerful as models or as sketches than in reality, because the model or the sketch has this feeling of fantasy. You can imagine, and when it goes down to reality — yeah, it’s not always as you imagined it. The power of the model is that you can change and build and play.”

Paper City is simply sheets of paper that can be detached, folded, and fixed into a seemingly infinite variety of modular constructions. I imagine that Frannie Kuhs gulped when she pressed the “order” button for the 25,000 thick sheets. Each contains a cut-out pattern, foldable into an structural object, a relatively easy manipulation that takes about five minutes, and involves the extraction of 12 small paper triangles. (If you do the math, that means there might be 300,000 tiny white triangles accumulating on Walker floors like snowflakes in a blizzard.)

As best as I can tell, the basic shape is technically called a rhombo-dodecahedron. The idea is cribbed from the legendary ’60s futurist Buckminster Fuller, who was famously obsessed with the structural integrity of triangular domes. (He once proposed putting an almost 2-mile diameter dome over Manhattan because it would pay for itself in snowplow cost reductions.) 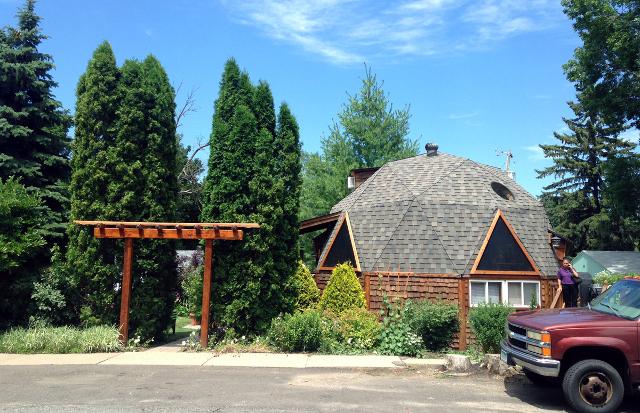 Apart from the construction, Haim’s project offers a grassroots coda to the Walker’s recent Hippie Modernism show, which explored the relationship between environmentalism and idealistic planning.

“It’s collaborative construction, working together to design something,” Kuhs said, describing the urban character of the project. “You can go and make your own structure, but how do you add that to the whole — how do you add that to somebody else’s? When people the walk in the room, they’re helping design and build something together. Maybe it’s a utopia where they could live, or someplace they want to be a fantasy for the future. It could be really be anything.”

Actually making a paper rhombus is relaxing, as your fingers engage in the tactile manipulation of transforming two dimensions into three. After removing the triangles, the “a ha” moment is when the small structure emerges from out of the Buckminster Fuller pattern, the moment of the first click of the paper tabs into their corresponding slots. From there, the surprisingly stable shape comes together, and one begins to feel like an all-powerful knitter. Once assembled, gathering two or 10 of the paper shapes before you offers seemingly limitless possibilities for the mind.

Paper City’s other big idea is to free people’s ability to play, a concept that appeals to anyone who grew up with Legos. Haim’s project suggests the importance of “homo ludens” (or “the playing human”) — that creativity is fundamental to our lives. To me, the project presents an attempt to rekindle the ambitions of modernism in a #Brexit age. By designing together, paper builders can start to move past the supposed cynicism associated with digital culture and return modernist architecture to local roots. 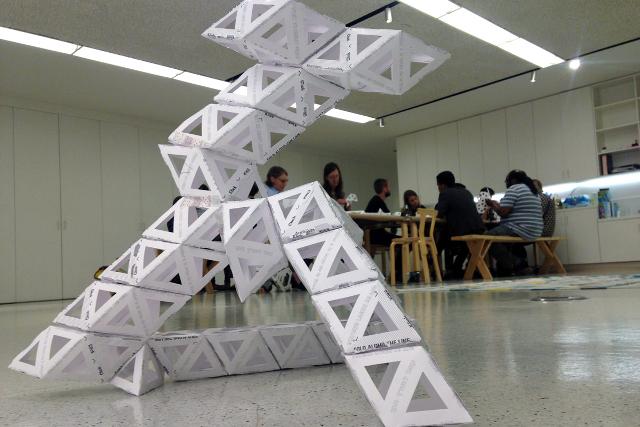 MinnPost photo by Bill Lindeke
Paper City’s other big idea is to free people’s ability to play, a concept that appeals to anyone who grew up with Legos.

Since the very beginning, the Walker’s unofficial slogan — “bits and pieces put together to make a semblance of the whole” — has appeared on the side of the building, but it’s rarely had such a participatory valence. Just as architects design our buildings and planners sketch out our cities from the top down, so too curators exercise precise control over the museum experience. The bits and pieces tell carefully chosen and often transformative stories, but these narratives typically run only in one direction, framed by the ubiquitous sign, “Do Not Touch.”

For the next month, visitors can craft a future in Walker’s basement Art Lab whenever the museum’s doors are open. (Of course they are closed on Mondays.) At least 25,000 pieces will be put together to create something larger than anyone’s vision.

In August, we’ll find out what the assembled whole resembles.

Under construction: The Walker crowdsources a fantastic house of cards