Downtown St. Paul is changing pretty fast these days, especially by sluggish historical standards. Jackson Street is currently torn up, getting a full-fledged makeover complete with the first leg of the new downtown protected bikeway. Remodeling crews have consumed the massive old post office on Kellogg Boulevard, restoring and renovating the building for a new hotel and apartments. And in the Pioneer-Endicott building on Robert and Fourth, right next to the Green Line tracks, the new Minnesota Museum of American Art show offers a well-crafted slice of artworks focused on representations of urban change.

The show, entitled “Brick x Brick,” is a collection of paintings, prints, photographs and sculptures aimed at starting a conversation about how cities change and grow. Placed in conversation with each other, the assembled art offers a visual foothold into the ever-changing city.

“St. Paul is going through a lot of changes,” Christopher Atkins, the museum’s curator of exhibitions and public programs, told me this week. “We don’t often get a chance to bring out some of these pieces from our collection, and we really wanted to bring all those things together to highlight St Paul’s changing cultural and physical landscape.”

As its name suggests, the museum, which dates back to the 1920s, focuses on American art, and thus American cities, though there are a few pieces (like the image of Havana) that offer a glimpse into a larger world. In much of the most well-known urban representations — think Edward Hopper — American cities reflect an unpeopled utilitarian quality that emerges throughout this show, too, cities built along lines of systematic development, prey to the incessant demands of capital.

“The key idea is what I call ‘modular accumulation,’ ” Atkins said. “How cities grow and build through modular shapes and forms. Hence the title, brick by brick. It also comes up when you look at how cities are organized around grids, and how artists are using different kinds of materials in how they make their work.”

Atkins described two main themes that emerge from the curation, the tension between showing how artists represent and reflect the city to others, and how they use modular techniques — what Atkins calls “the process of accumulation” — as part of the artistic process.

Painting the space between the mundane and the magical

The show includes a number of local touchstones, including one painting that falls close to my heart by local artist Carolyn Swiszcz, of a Kmart sign next to the remodeled shopping mall where I grew up. 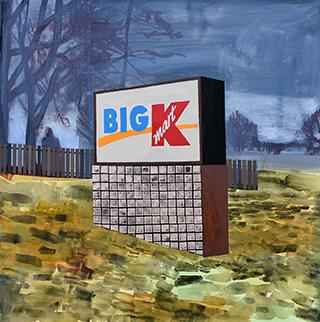 “I take things that I see every day, usually around West St. Paul or places I’ve traveled,” Swiszcz told me this week. “It’s generally something basic. That piece started out pretty formally, actually. When I saw that one, I was looking at all those squares that are on that sign. It would be fun to make all those squares.”

Much of Swiszcz’s work, especially the Kmart sign, falls into the vacuum between vintage and bland, a space well populated by suburban modernism.

“I always wonder about that Kmart. My work is sort of asking a question, trying to decide how I feel about a place. Does this plaza fill me with intense dread or is it a source of delight? I usually choose to paint a place that I’m of two minds about. And I go there [to the Signal Hills parking lot] a lot to feed the seagulls in the fall.”

Swiszcz’s painting offers a playful quality that enriches the mundane and, to me, enlivens the suburban postwar landscape to the point where the utilitarian environment becomes oddly beautiful. (Also worth your time: Swiszcz’s musical video of seagulls playing with a food collage depicting the Kmart store in question.)

Other works that caught my eye included a pair of industrial paintings depicting an oil tank and a quarry. Together they seem to foreground the distance between the human observer and our material landscape.

On the far wall, Minneapolitans will immediately recognize the large painting by Mike Lynch of the Midtown Greenway circa 1988, showing the bridges around Harriet Avenue, which at the time were surrounded by train tracks and grain elevators. As Atkins explained, given the radical changes along today’s Greenway, the piece offers a premonition of loss, where the Greenway’s old landscape (complete with telltales!) is shrouded in a gray, almost funeral pallor.

“In 1988 when this piece was made … I’m not sure if he’s making these paintings in the position of forecasting, but there’s a real elegiac feeling to this canvas,” Atkins explained. 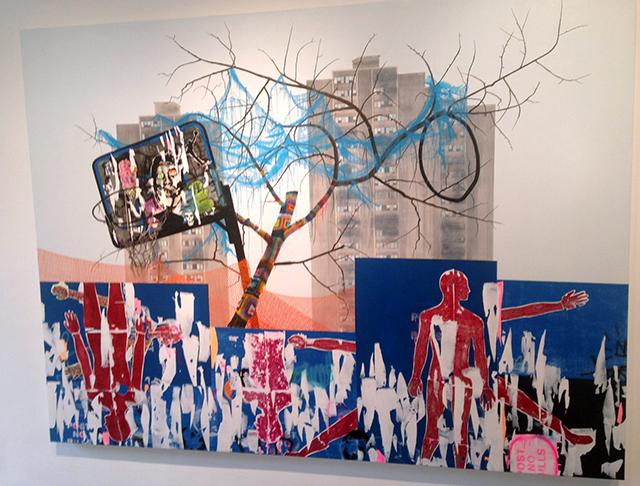 Another local image is Erik Benson’s large recent work, “Vitruvian Jumpman,” featuring the Charles Horn towers, a pair of 20-story buildings off 31st and Pillsbury in South Minneapolis (owned by the public housing authority) that I used to bicycle past when I lived in the area. A photograph of the towers serves as a canvas for mixed-materials that together offer an unusually bleak view of the city, a tangle of yarnbomb-esque plastic webs in a bare tree, a wooden fence covered in repeating images of a body. 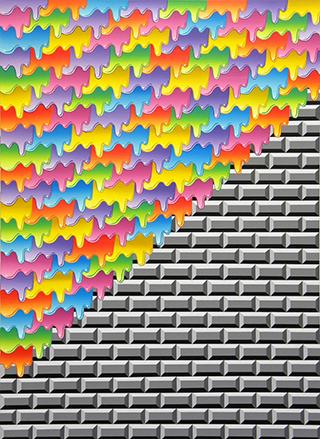 You’ll also find more literal figurations of bricks, including a playful hand rendering of 8-bit Nintendo-era graphical bricks by Matthew Zefeldt and an early Louise Nevelson sculpture that erects itself like children’s blocks. Other works include a Larry Mohr sculpture sculpture of steel beams and a playful sculptural assemblage by Chicago-based artist Juan Angel Chávez of found items that, together, resemble a personal shield of kitsch and detritus.

Given its timing, in the midst of the Twin Cities’ downtown building boom, the show offers a rich set of perspectives on what it means to occupy a changing city, and how intensely the relationship between human and nonhuman worlds can collide and mix into personal and sometimes alienating visions.

The show will be up Thursday through Sunday until mid-December, and MMAA will be offering a series of artist programming for the next few months, including artist talks by Juan Angel Chávez on Sept. 13 and Carolyn Swiszcz on Oct. 18. Given the changes unfolding in downtown St. Paul, stopping into the museum for a bit of context seems a splendid use of your time, at least if you can find your way through downtown’s construction.