National Night Out was this week, and all through Minneapolis and St. Paul’s urban blocks, people got together to hang out. For many neighborhoods, it was a huge success.

“Why can’t we have national night out every week,” read one Tweet that caught my eye.

Well, as it turns out, you can have a night out every week. The idea has been spreading through St. Paul’s Como and North End neighborhoods, helping neighbors meet each other and create community ties. And because of the playful low-stakes format, these “Flamingo Friday” events have the potential to spread and fill in some of the gaps in the fragmented urban fabric.

The idea is pretty simple: an informal weekly front-yard event to help neighbors meet each other. The symbol of the gathering is a plastic pink flamingo, a classic paragon of yard kitsch.

“I wish I could take credit for inventing the idea,” Amy Brendmoen, the City Council Member for St. Paul’s Fifth Ward, told me. “I read about it in a magazine or newspaper about six years ago now, and thought it would be a cool way to do a noninvasive casual gathering.”

The way that Brendmoen set it up, flamingo parties had three rules. First, hosts had to keep it simple, only providing a cooler and a few chairs. (Many hosts seed the cooler with a few cans of beer or pop, but even that isn’t necessary.) The idea is to avoid overdoing it with large spreads of food or drink, for fear of party host escalation. Second, and Brendmoen told me this was very important, if anyone needed to go to the bathroom, they had to return to their own houses, ensuring that nobody hosting a party had to clean their house first. Finally, someone at the gathering had to take the pink flamingo home. And whoever took the plastic bird planted it in their yard, marking out where the next week’s party would be.

“If you can’t walk home to the bathroom, you are probably too far out of the neighborhood, and should probably start your own parties in your own neighborhood,” Brendmoen explained when I asked her about the rules.

The rules are intended to keep the barrier to entry low, to make sure that as many of the diverse people in the neighborhood as possible can participate. And when Brendmoen hosted the city’s first ever “Flamingo Friday“ in her yard six years ago (before she ran for office), the project became a fast success. Initially planned to last from 5 to 7 p.m., it was so popular that people stayed around and chatted until almost midnight.

“It was clear to me instantly that people in the neighborhood were really hungry for that opportunity, a very comfortable way to introduce yourself to people in an environment that is casual and informal,” Brendmoen said.

Six years later, the South Como neighborhood still has Flamingo Friday parties, though they’ve become more of a monthly rather than a weekly affair. (The next one is this week.)

“People say, ‘I’ve lived here for 27 years, and never knew the people who lived behind me,’ ” Brendmoen said. “This has transformed how our neighborhood feels. When you bump into people, now they share information about neighbors, or say ‘Oh, I’m really sorry that Debbie and Todd’s dog died.’ It’s super small-town chatter, but it’s opened the door for much more.”

The bathroom rule, in particular, means that the flamingo party model has inherent limits. Instead of getting bigger and bigger, the idea ends up spreading to new neighborhoods next door.

For example, after hearing about the flamingo parties for a few years, this summer Brendmoen’s friend Rich Holst decided to try it in his neighborhood, about a mile to the East. Holst lives in a small residential pocket of St. Paul’s diverse North End, a few square blocks smooched between train tracks and a pair of busy roads. 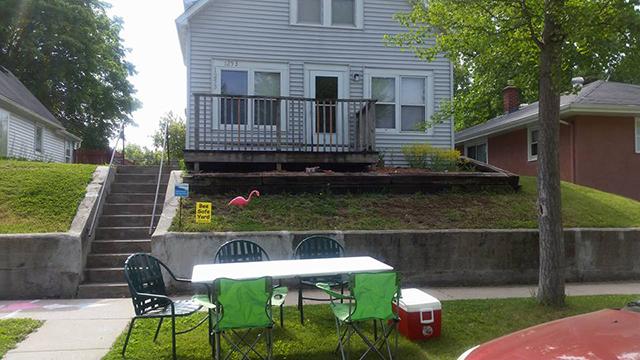 Courtesy of Lena Buggs
The symbol of the gathering is a plastic pink flamingo, a classic paragon of yard kitsch.

“I’ve lived in my neighborhood for 19 years and could probably count on one hand how many neighbors I knew,” Holst said. “It’s a nice, tucked-in neighborhood between Rice Street, the swamp, and the railroad track.”

(Holst even came up with a new name for the unnamed neighborhood: East Willow Reserve, after the wetland just to the west.)

Holst quickly wrangled a friend down the block into helping with the organizing, and a Flamingo Friday tradition was born.

“We love the neighborhood. My wife and I just bought our home last August,” said Lena Buggs, Holst’s co-conspirator. “We have a little bit of an issue with crime here, so we decided to put this thing together. It’s really simple, just a cooler table and chairs — come on down, meet your neighbor that kind of community-building thing. From there it escalated.”

Holst and Buggs have organized nine weeks of parties so far. It seems like a lot, but after the first week or two of handing out fliers, the time commitment has rapidly shrunk, even as the weekly parties become more popular.

“It’s super super easy,” Holst assured me. “The first time, I spent maybe 5 to 6 hours investing effort into this thing, knocking on people’s doors and getting a good turnout. I was worried I would throw a party and no one would show up. Now I spend maybe 10 minutes a week on this, figuring out who’s going to do it next. And there are so many volunteers that we have to schedule it out.”

Actually attending a Flamingo Friday party seems like no big deal. At the one I attended Buggs had reached out to the St. Paul Fire Department, and so for the first hour they parked a ladder truck on the street for kids to explore. And the party’s hosts, Shelly and Kevin, assured me it was not too hard to do. They had more than the necessary accoutrements: hot dogs and a canopy.

“It was really easy, a couple hours,” Shelly said. “We provided a little bit of food, and everybody looks like they brought stuff. Just a great community-building thing. We’ve lived here for 18 years and we never had this. It’s great that this newer family started this, and I think it’s nice.”

I hung out in the yard off Orange Street for an hour or so, and even I met some of the neighbors. A guy who lived next door invited me over to check out his basement recording studio, and I watched as Holst set up an impromptu traffic-calming device (a detached basketball hoop) so that kids could ride scooters in circles in the street.

Trends like long commutes, and the technologies of modern isolation — the automobile, air conditioning, and home entertainment systems — have meant that, generally, American community ties are weaker than they’ve been. This is particularly true when it comes to geography, where smartphones and Facebook, as useful as they are, tend not to reinforce propinquity. Instead, people solidify ties with like-minded people around shared politics, culture, or hobbies.

But neighborhoods are a different story.

“Everything on the Facebook page, I thought it was mostly negative stuff,” Rich Holst said, describing why he wanted to start the flamingo events. “I thought, maybe this would be a way to change some of that attitude in our neighborhood just a little bit.”

Buggs and Brendmoen shared a similar motivation, that somehow these informal gatherings might have meaningful effects for community improvements like traffic safety or better environmental habits.

“We’ve got people who have been here for 10 years that didn’t know their next door neighbor until we started this,” Buggs told me. “And all these kids running around. It’s a great community-building thing. There’s been some talk, people who care about the environment or transit or public safety. It’s where we get together and decide what we want our neighborhood to look like.”

(The focus on environmentalism might not be entirely accidental. Buggs is running this year for Soil and Water Commission, a normally obscure seat that requires a lot of engagement.)

“The threshold on this, it really is a game changer,” Holst agreed. “Everyone here, people that are attending these events are really starting to feel a sense of community. It’s a completely positive thing, there’s nothing negative about it.”

The next event is next week. The flamingo might hibernate when winter hits, but come spring, it’ll migrate back into someone’s yard. And as long as people keep coming, the flamingo will keep moving around the North End.