When you go to transportation meetings, you find yourself learning jargon. Most often, it will be an acronym like LOS (level of service), AADT (annual average daily traffic), or NACTO (National Association of City Transportation Officials). But sometimes the vocabulary can surprise, as it did the first time I heard the term “pork chop island.”

“Pork chop island?” I scribbled down in the margins of my agenda, before circling it twice and adding another question mark.

As it turns out, this amusing term is not a new Lowertown restaurant, but denotes the triangular sliver of concrete created by free-flowing right-turn “slip lanes” at intersections. They have the transportation benefits of improving vehicular safety by reducing complexity, and increasing the turn radius of a corner in ways that allow larger vehicles to turn more easily. But depending on the situation, pork chops can be dangerous or inconvenient for pedestrians and bicyclists, and some cities are starting to think more carefully about when and where they install them.

What is a pork chop?

When you google “pork chop island” you get a lot of advice about kitchen counters, and you have to dig a little deeper before you come to any intersection engineering schematics. The history of urban street design revolves around intersections, the key places where conflict points — every potential car, pedestrian, or bicycle — can overload drivers’ ability to perceive their environment.

The guiding principle for improving intersection safety is to reduce complexity — for example, by creating a dedicated left-turn signal phase or adding a pedestrian median. Slip lanes and pork chop islands can accomplish both goals simultaneously. But if designed incorrectly, pork chops encourage drivers to speed around corners, ignoring crosswalks altogether.

“Pork chops seem like kind of a dated concept right now,” explained Matt Steele, a Minneapolis urbanist and former City Council candidate. “With pork chops, people [drivers] are concerned about where they’re going, and not what else is happening at the spot where they are.”

According to Steele, pork chops might work for suburban areas, because they can encourage cars to speed around corners without stopping. If you’re there on foot or a bicycle, however, that behavior can be uncomfortable and dangerous.

“Ever since I was a little kid, it’s frustrated me,” Sean Hayford O’Leary told me. “I grew up in Northfield thinking it’s so unsafe. You press a button and are assured a walk signal and cars have to stop for you, but to get to that button you have to cross this free flow of traffic.”

These days, there are subtle changes to pork chop designs intended to decrease the speed at which cars turn the corner. Instead of having a constant turn radius, the pork chop is elongated to create a tighter angle that encourages drivers to turn and look for oncoming traffic.

“Hennepin County tries to use squared-up intersections with modal balancing,” Nick Peterson explained. “In doing this sometimes we need to include pork chops — especially at skewed intersections or major arterials. The pork chops reduce multimodal exposures, as well as clarify and influence movements of the traveling public. There is no one-size-fits-all approach to designing intersections. Pork chops are just one option that we have to consider during the balancing act that is design.”

But in many cases, especially involving large trucks, pork chops are useful for allowing turns at wider angles.

“Pork chops are faster and smoother of a movement for cars or a large truck,” O’Leary said. “They don’t have to make the hook maneuver where the truck goes into other lane, and I have heard engineers claim that it makes it safer for pedestrians because drivers are so focused on looking.”

But pedestrians and pork chops can be a deadly combination. Last month, a tragedy unfolded on a pork chop island in Bloomington, at the corner of 86th and Nicollet. Crisostomo Sanchez-Sanchez was waiting for the bus at the stop on the pork chop on the southwest corner when a southbound Xcel truck swerved to avoid a turning car. He was hit, pinned under the truck, and died.

Unlike many pork chops, which often date back decades to design eras that prioritized traffic flow over pedestrian spaces, the Bloomington intersection was recently reconstructed, around five years ago. The southwest corner received a pork chop treatment.

The crash that killed Sanchez-Sanchez wasn’t directly related to a car speeding through the slip lane, normally the danger presented by the pork chop design. But if the bus stop hadn’t been placed on the pork chop in the first place, the crash might not have had tragic results. That’s something that really bothered O’Leary, who serves as a planning commissioner in neighboring Richfield.

“I object to bus stops being located on pork chops,” O’Leary told me. “The one where the crash occurred, you might potentially be waiting 20 minutes in the middle of the intersection.”

Responding to emails from Steele, the City of Bloomington referred the matter to the Police Department, stating that “while your questions relate to background on the intersection, the Police have an active investigation underway related to yesterday’s crash and are the point of contact on the issue right now.”

“Looking at what caused that crash, one of the main contributors was the pork chop that was put in there a few years ago,” Steele said. “There’s a metro transit bus stop on an island of concrete between speeding cars. It was the final design thing that went in, and doesn’t appear in any of the planning documents that I could find.”

For me, the pork chops that most grate on my daily commutes are the ones along the downtown St. Paul bridges, allowing free right turns between Kellogg Boulevard, Robert, and Wabasha. With the pork chops, crossing the street can involve dodging cars that can speed around the corner without slowing down. 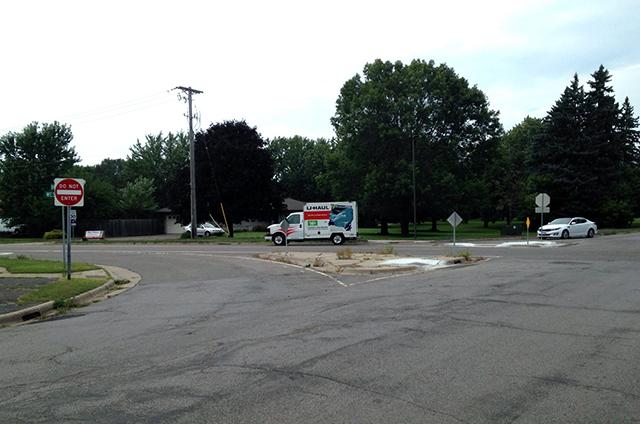 But slowly that dynamic is changing as cities and counties begin rethinking intersections.

“There has been a paradigm shift for the transportation industry where the aim is to tighten up intersections where we can,” said Nick Peterson, a design manager for Hennepin County Public Works. “It is less about ‘automobiles first,’ which means fewer free rights and large sweeping curb radii.”

New terminology allows you to get a better grasp on the world around you. By naming things, we can more easily notice and understand them, and pork chops are no exception. Once you start seeing them, it turns out that we are surrounded by pork chops.

The mystery of ‘pork chop island’