Park planning has typically been a top-down affair. Beginning in the 19th century, park designs like the famous landscapes of Fredrick Law Olmsted were explicitly designed to shape and alter human behavior, moralizing the masses through the awe of nature. Throughout the 20th century, park and playground theory retained its paternalist mien. Meanwhile, in the modern era of tight budgets and public-private partnerships, new parks are often built and designed quite literally by private individuals.

So it’s rare when a new park displays deep democratic roots, but that’s exactly what’s happening in St. Paul’s Hamline-Midway neighborhood, just off the Hamline Avenue Green Line stop. With help from nonprofits and the neighborhood group, students at Gordon Parks High School are seeing a chance to design a new park in their own backyard.

“Years ago, we went to the DCC [District Councils Collaborative, a neighborhood engagement office for the Green Line] to look at a mini-model of University Avenue, and behind our school on this model there was a green piece of plastic,” explained Paul Creager, the school’s curriculum and media arts coordinator. “Our students thought it meant that the vacant property behind our school was going to become a park. ‘No, that’s just a stormwater runoff concept’ [we learned], but later that day we called the realtors for the vacant properties behind our school, and helped put in motion the process.”

Gordon Parks High School is a St. Paul public school that moved into a large building on the corner of University and Griggs just before the Green Line construction began. Named for the famous photographer, director of “Shaft,” and civil rights activist with St. Paul roots, the school emphasizes civic engagement for historically underserved students. Getting involved with the park project has become a piece of the curriculum.

The other part of the story is strong advocacy from residents of the Skyline Tower, a 500-unit ’70s-era affordable housing complex across Griggs Street. (It’s the large 24-story building visible from I-94 as you drive between Hamline and Lexington.) Residents in the tower have long pushed for better amenities in the neighborhood, particularly more open space in the historically industrial and commercial Midway.

“The people in the Skyline Tower had a dream for a green space and did a nice job of getting the attention of the mayor,” Jenna Fletcher, a program director at the Trust for Public Land (TPL), explained.

With help from the city’s 8-80 Vitality Fund, Fletcher and the TPL put together the purchase of the parcels that will become the 5-acre park as part of the group’s focus on more green space along the light rail line. The final deal was struck in January, and since then the land has been “conveyed” to the city.

The vacant lots that will become the yet unnamed park have sat empty on Griggs Avenue for decades, gathering dust and entropy. The space is actually three separate parcels on the side of a hill, separated by a terraced retaining wall. Today, chain link fences surround the cracking parking lot and weeds grow around the abandoned lampposts, though the city has recently mowed the grassy center of the park in preparation for its future.

“It’s a process that’s going to take time, and we’re not making too many promises because of timing because you can’t start building a park until you have all the money,” Fletcher told me, pointing to 2018 as an optimistic forecast for when the park construction might take place. 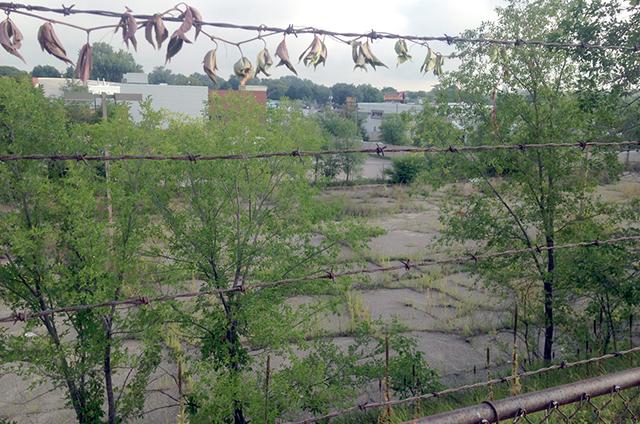 MinnPost photo by Bill Lindeke
The Midway has long had an odd mix of residential and industrial land uses, seemingly scattered in between massive parcels of institutional land.

In the meantime, the local Union Park neighborhood group and the high school are focusing instead on community outreach, creating a vision for what the park might look like.

The week before school started, the teachers met to tour the boundaries of the future park and brainstorm ideas for how to include it in the classes.

“On the last day of school, we did seed bombing with a kale launcher,” one of the teachers said. “We shot seed bombs into the property, but now that it’s mowed maybe they haven’t sprouted.”

Other ideas include urban archaeology, using the existing plants as an ecology lesson, and having the students and their families serve as a megaphone for ideas from the broader community.

‘They start to see a bigger context’

“It does stretch them; they start to see a bigger context instead of this little micro world,” said Chris Frost, who teaches media and science classes. “That’s huge. That’s like travel. This urban exploration archaeology is very tempting because there’s a lot you don’t see, but it’s still history. It’s right here in this little plot, and we’re gonna dig down, down, down.”

The Midway has long had an odd mix of residential and industrial land uses, seemingly scattered in between massive parcels of institutional land. The history of the park land is no exception, being very close to the historic home of the massive Montgomery Ward building. Historically, according to Frost, it was full of train tracks and warehouses.

“Folks I talk to traveling through say the Midway is a place they do their shopping,” Michael Johnson told me. “Not having a place to stop off and rest, they talk about this area as being stressful. Not everybody having a quiet green place.”

With help from TPL, the Union Park neighborhood group has hired Johnson to serve as what Fletcher calls a “park listener.” For months, his job has been to walk around the Midway gathering results about what kind of park people would like to see.

“If people are cynical at all it’s because of the safety piece,” Johnson explained, referring to concerns about crime. “But there’s hope that if there are activities provided, that the teens who don’t have a place to go … and we’re offering things like soccer and basketball in the space. People in the area feel like new things like this usually happen in more affluent parts of the city, so it’s fun to educate folks that the park is theirs, and its coming.”

Recurring theme: the need for soccer and basketball

The need for soccer and basketball is a recurring theme. Nearby parks, like Dunning Field across the freeway, have baseball diamonds, but nothing for the new generation of neighborhood young people who enjoy different sports. 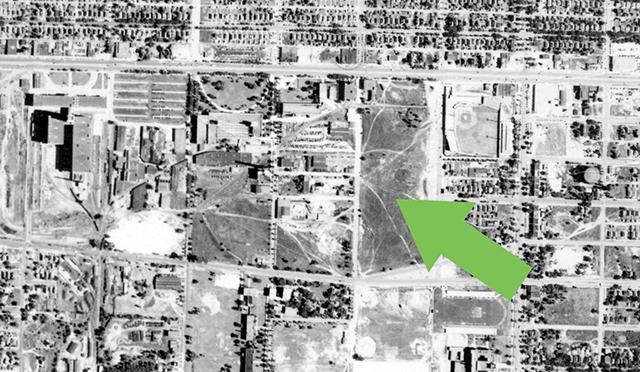 Courtesy of the MN Historical Aerial Photographs Online at the John Borchert map library
An aerial photo of the site from 1940.

The Gordon Parks teachers hope part of the park will be available for community engagement and field trips, with students planning the space just outside their classroom window. By literally digging up the past, engagement and events could help people start to imagine what the park will look like.

“It’s conceptual, but around 2018 might be when earth is moved,” Creager told the faculty. “The concepts that will shape the park are being developed right now through our community engagement, and all the concepts and ideas that we have could be put into the mix. We could be like a big microphone that amplifies those underrepresented voices.”

It’s rare that at-risk students receive such grand permission to literally re-create their environments. And now that school has started, the work begins. By the time the current students are ready to graduate, the imagined park should be ready to join the real world too, in the class of 2019.

Planning a grass-roots park in St. Paul’s Midway is on the school calendar