She was one of a group of five young people standing outside St. Paul’s Bang Brewery this week, talking about watersheds.

“You can imagine watching one of the many giant rainstorms,” Colwell continued. “We have all this water coming off the street and you think it’s really impressive. But now you are faced with the idea that whatever was on there is going into the river.”

“It’s easy to not see the connection between the parking lot where you’re buying your groceries and the lake where you’re taking your boat,” agreed Mary Henke-Haney. “But as a Master Water Steward, you’re going to make all these connections and you can’t un-see it. You can’t look at a parking lot and not see how it affects your water and your weekend plans.”

Henke-Haney and Colwell were two of the dozens of new inductees in the Twin Cities’ burgeoning community of Master Water Stewards, a three-year-old certification process run by the Freshwater Society (FWS). This week’s gathering was a sign of how water consciousness is catching on in the Twin Cities, where water health has long been central to its regional identity. With dozens of official new stewards in the pipeline, chances are good that, no matter which watershed you inhabit, you’ll be hearing more about rainwater, parking lots, and storm sewers in the near future.

First hearing the title “Master Water Steward” sounds odd, as if there’s a secret water hierarchy you hadn’t known about (e.g. Water Steward’s Apprentice, Water Steward-in-Training, Assistant Chief Water Steward First Class, etc.). But the program is modeled after the popular “Master Gardener” designation, only instead of tangible plants, participants are given the fluid task of caring for ever-moving water.

“It teaches some science, and gives them tools and education around water-quality issues, specifically storm water runoff issues,” explained Dierdre Coleman, the program coordinator for FWS. “It gives them the tools they need to go out and build projects that help infiltrate water and clean it — and to involve their communities in that process, to be able to teach their neighbors how to do the same.”

As Coleman describes it, MWS training offers “blended learning,” a mix of online education and hands-on projects. The course, which costs around $200, represents an initial 50-hour commitment to education and group actives.

(By the way, the deadline to sign up for the next round of classes is Sept. 30.)

One key difference with the MWS education is the “action piece,” in which students commit to building specific storm water infiltration projects in their neighborhoods. These are typically rain gardens in private yards, church grounds or, with partnerships, on city property.

Holding the event at the brewery was no accident, as the brewery’s new patio exemplifies the beauty of water infiltration. Housed in a uniquely designed grain silo, the 3-year-old Bang Brewery has always presented a striking profile within St. Paul’s young West Midway brewery district. With its new patio, opened this year, the brewery has achieved a new level of sustainable architecture.

“Originally, the plan was to do barley field planting around the granary,” Sandy Boss Febbo, the brewery’s co-owner, told me over a pint of organic beer. “We thought we’d have an opportunity to talk about cycles of planting and soil. But the first year all the storm water took our germinated barley and rolled it into the street. We are surrounded by hard surface, and we literally get all of it.”

Bang’s small grounds are surrounded on all sides by parking lots, parked semi-truck trailers, and railroad-laden industrial land. While most people glancing at the new landscaping might think it oddly beautiful, it’s not immediately apparent that the rocks and grasses serve the functional purpose of catching rainwater. In fact, the terraced and stepped rain garden basins manage to catch and clean well over 100,000 gallons of storm water each year.

“There are two rain gardens,” explained Gustavo Castro, an engineer who helped with the Bang landscaping. “Water comes from the parking lot and the check basin holds a little bit. These gardens are designed for a certain storm event, and if you get more than 1 inch, it’s going to overflow somewhere. The rocks are here just to slow down the water so that it doesn’t rush into the street.”

Curious, I also asked Boss Febbo what kind of water they use in their excellent beer. The answer was reassuring.

“City water,” she replied proudly. “St. Paul water is awesome.” Of course it’s filtered through two charcoal filters, to remove chlorine, which I learned “is the enemy of beer.” 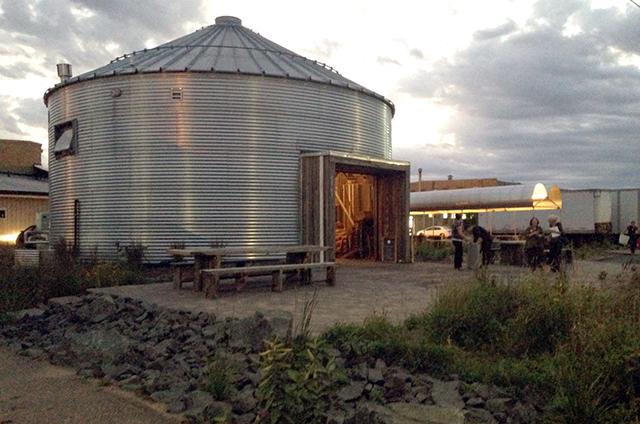 A new generation of water advocates

I first encountered watersheds as a kid, learning from my late uncle, who was a retired biology teacher obsessed with lakes, streams and aquatic life. I often found his long speeches about watersheds a bit boring, and I’ve ever since associated water-specific advocacy with an older generation, perhaps retirees or aging hippies.

But if this week’s event was any indication, watersheds are connecting well with younger people. Along with bikes and beer, Master Water Stewardship might offer the next big calling for urban millennials.

“Today was an effort to reach out to a different audience where people want to come and learn a little bit and, if interested, have a more in-depth conversation,” explained Jessica Brommelkamp, who serves as the communications and outreach specialist for the Capitol Region Watershed District. (That’s the watershed encompassing much of Ramsey County, and one of the seven watersheds participating in the program.)

Certainly hosting events at breweries doesn’t hurt the cause, but it was impossible to ignore the excitement of the young people chatting amid prairie grasses on the edge of the train tracks. Every one of the dozen Master Water Stewards that I spoke with talked of how they had learned to see the world differently, as if through the lens of a raindrop.

A list of the biggest things that stewards notice includes trash-clogged storm drains, grass clippings swept into the street (a big no-no!), overused automatic sprinkler systems, and the aforementioned parking lots. And the key is that they are able to do something about it, either personally or through talking with others.

“Being able to do something about the water problem is the empowering piece,” Mary Henke-Haney said. “You know what to do and can tell people. The community engagement is key because the majority of people aren’t bad. They would never take their garbage and pour it into the river, so it’s just helping them see those connections and providing the education about the leaves you’re putting in the storm drain.”

“It’s changed how I communicate about things,” agreed Lindsey Schwates, who completed her training a year ago and now works for the watershed district. “My whole life is water now.”

Runoff and rain gardens: Seeing the city through the lens of a Master Water Steward